Stealthy F-117 Nighthawks Have Been Masquerading As Cruise Missiles

The “retired” F-117s are ideal surrogates for cruise missiles, which have small target signatures and threaten the U.S. and its interests abroad.

The head of the Air National Guard, Air Force Lieutenant General Michael Loh, says that F-117 Nighthawk stealth combat jets have been supporting training exercises, in part, by serving as surrogates for incoming cruise missiles. The Air Force only publicly acknowledged that some of the remaining fleet of F-117s, which were officially retired in 2008, were being used for any kind of training for the first time earlier this month, despite clear evidence that this has been the case for some time now. The War Zone

was first to report on this latest deployment of Nighthawks to Fresno-Yosemite International Airport in California for dissimilar air combat training with F-15C/D Eagles from the California Air National Guard’s 144th Fighter Wing.

Lieutenant General Loh offered this new detail about the F-117's new lease on life in response to a question from one of Aviation Week's reporters during the Air Force Association’s annual Air, Space, and Cyber Conference, which concluded yesterday. The War Zone's own Tyler Rogoway has highlighted repeatedly how the remaining flyable F-117s would be useful cruise missile surrogates since it first became apparent many years ago that at least some of the Nighthawks have been enjoying a very active "retirement."

“When you look at 117s that come and land and do that stuff, they’re a stealth platform, right?” Loh said. “Early days of stealth, but they’re still a stealthy platform.”

“So they can simulate things out there like cruise missiles that we would actually face,” he continued. “So are they a perfect platform for a cruise missile defense exercise? Absolutely.”

Broadly, cruise missiles — especially newer designs being developed and fielded by America's potential near-peer adversaries, China and Russia — present significant threats to American forces abroad, as well as to the U.S. homeland and outlying American territories. U.S. military officials have been increasingly sounding the alarm about the possibility of land-attack cruise missile strikes on the United States, including weapons that could be launched from submarines lurking offshore. In addition, there has long been a fear that hostile parties, including non-state actors, might be able to carry out similar attacks from other types of vessels, including innocuous cargo ships, using purpose-built containerized systems or improvised ones. New and improved anti-ship cruise missiles, some of which have very small radar and infrared signatures, are also of particular concern to the U.S. Navy.

Cruise missiles, in general, typically fly very low amongst the ground and surface clutter and are relatively small, inherently giving them small radar cross-sections and infrared signatures. This, in turn, means they can be very difficult to detect and then engage. Many modern threat cruise missiles, such as Russia's air-launched Kh-101, and its nuclear-armed Kh-102 variant, also have stealthy features of their own, which only makes them harder to spot and track. Russian and Chinese efforts to develop new designs capable of flying at hypersonic speeds only add more complexity to this overall threat picture.

Lower-end cruise missiles can still be very real threats, too. Anti-ship and land-attack designs of various types are steadily proliferating around the world, including among smaller military forces and even non-state actors.

All told, it would make perfect sense that F-117s have been flying, at least in part, as mock cruise missiles during training engagements with Air Force units, as well as other elements of the U.S. military. Nighthawks could also be useful stand-ins for cruise missiles to support the research and development and test and evaluation of new weapons, sensors, and other systems.

The Air National Guard, in particular, is a key line of defense against potential cruise missile strikes on the homeland, and the Air Force has been looking to expand the capabilities of its F-15C/Ds, as well as its F-16C/D Viper fighter jets, to respond to these threats. The Eagles, such as the ones assigned to 144th Fighter Wing that trained with the F-117s earlier this month, have benefited from the addition of new active electronically scanned array (AESA) radars that are better able to spot and track threats with smaller radar cross-sections, as well as Sniper Advanced Targeting Pods, which give the jets an alternative means of visually identifying targets, even at night, at extended ranges. The Sniper pod can be slaved to the aircraft’s radar, and vice versa, allowing the sensors to be used in a directly complementary way to rapidly detect, identify, and track potential threats.

The addition of AESA radars to many of the service's F-15C/Ds was largely spurred by the cruise missile threat. Now, some of the USAF’s F-16s, especially those belonging to guard units that watch over high-threat areas, like Washington, D.C., are also now getting AESA radars, as well as new tactics and weapons to deal with the cruise missile threat.

With Loh’s new comments about how the F-117s have been being employed, it only seems more likely that the Nighthawks have been acting in this role during their engagements with other services, as well. Some of the jets were notably spotted taking part in a Composite Unit Training Exercise (COMPUTEX) centered on the Nimitz Carrier Strike Group (CSG) off the coast of southern California last year, where the jets could very well have acted as mock anti-ship cruise missiles, among other roles. Non-stealthy aggressors are often used in exactly the same way to support naval training exercises.

F-117s have also been spotted flying very low, which could reflect a mock cruise missile flight profile, during Air Force Red Flag exercises and while working with elements of that service's prestigious Weapons School. The Weapons school is located at Nellis Air Force Base in Nevada, which is also the main hub for Red Flag drills.

Of course, playing the role of cruise missiles is only one of the F-117's jobs today. As Lieutenant General Loh noted, despite the age of their stealth technology, these jets are still stealthy and are unlike anything most Air Force pilots or any personnel they are working with at sea or on the ground down below are likely to have encountered in any other context. This all means the Nighthawk, which celebrated the 40th anniversary of its first flight this year, remains a very valuable asset for all kinds of dissimilar aerial combat training, as well as various test purposes.

“Although officially retired, many F-117s remain airworthy and are used to support limited research and training missions based on overall cost-effectiveness and their ability to offer unique capabilities,” an official Air Force news item about the Nighthawks training with the 144th Fight Wing also noted. The Air Force still has dozens of these jets in storage at the Tonopah Test Range Airport in Nevada, the F-117's first operational home and where the aircraft still flying today are based, which can serve as a key source of spare parts. That the Nighthawks are seen as relatively low-cost for the capabilities they offer is also a testament to its original design, which leveraged components from various existing U.S. military combat jets.

With the Air Force now clearly opening up more and more to talking about what its remaining F-117s are still up today, we may now start to get even more details about exactly how these jets are being utilized nearly a decade and a half after they were officially retired. In their role as cruise missile surrogates, we could also soon see them show up to train with all four of the Air National Guard units equipped with F-15C/D fighters that are tasked with protecting America's maritime borders, as well as the F-16s whose mission is to guard the highly sensitive airspace over the nation’s capital in Washington, D.C. 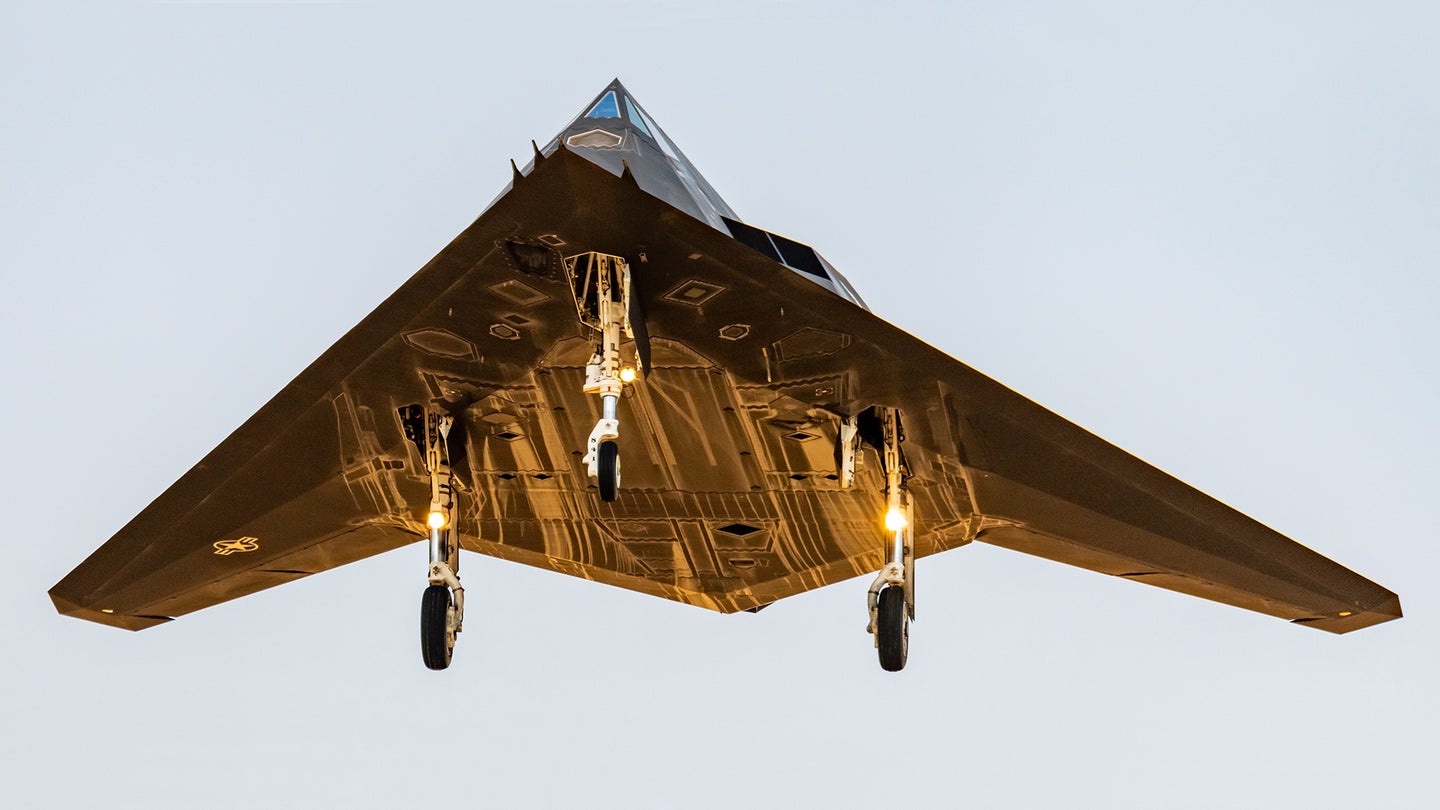 The officially retired F-117s are flying out of Fresno for training with resident F-15s and the Air Force is finally opening up about their mission. 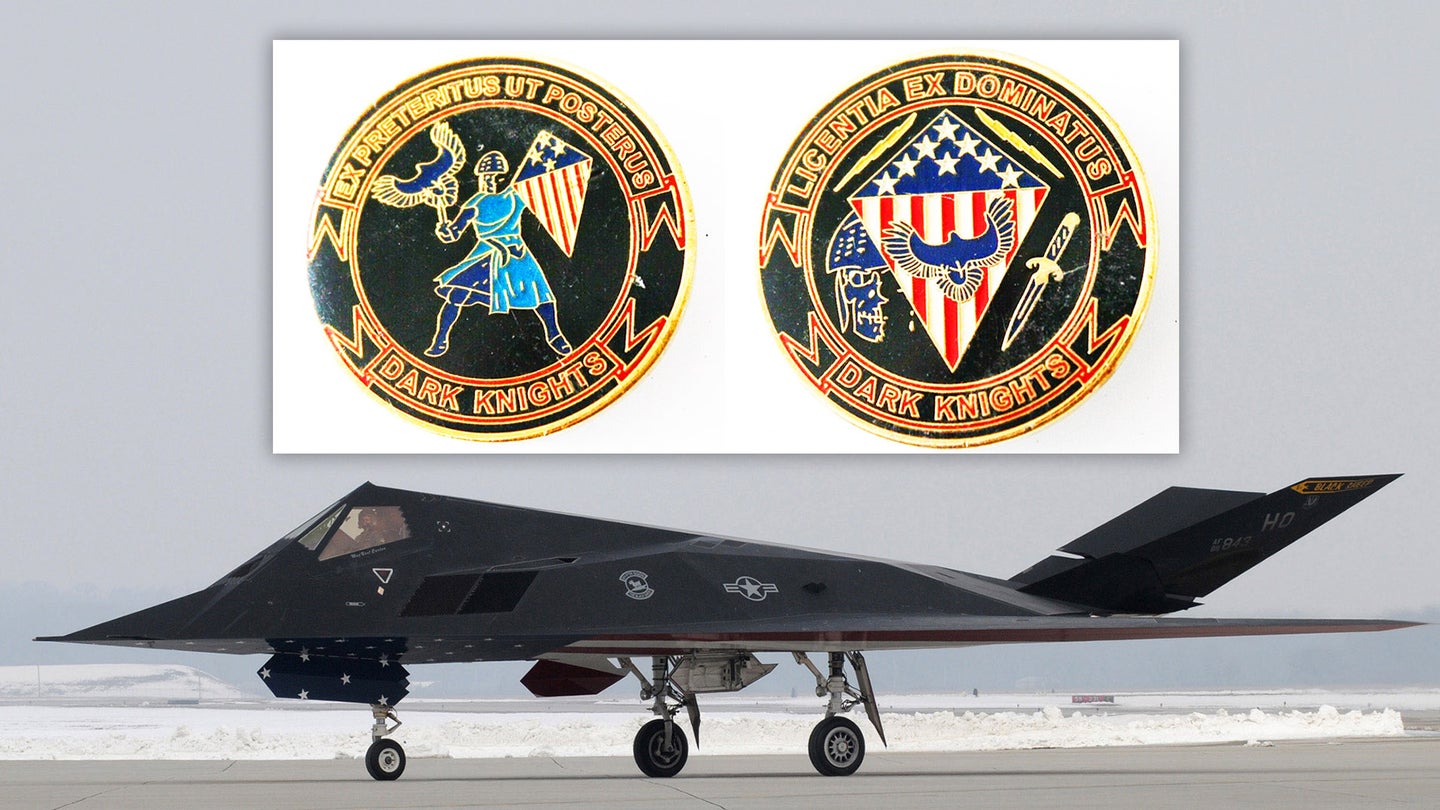