With the long, long-awaited Top Gun 2 movie delayed yet again, naval aviation fans can probably be excused for feeling at least some symptoms of fast-jet withdrawal. It’s good news, then, that the latest cruise video from the U.S. Navy’s Strike Fighter Squadron 154, or VFA-154, also known as the “Black Knights,” has just dropped. And the real-life result, running to a full 30 minutes in high definition, is well worth your time. In fact, it’s the best Super Hornet footage we have ever seen.

The video, which you can watch in full below, was shot during VFA-154’s 2020-21 cruise to the Western Pacific on board the aircraft carrier USS Theodore Roosevelt (CVN-71) with its F/A-18F Super Hornets. Navy Lieutenant Taylor “Gary the Snail” Barrett and other members of the squadron — which has the rallying cry “Black Knights Rule!” or BKR — put it together using a combination of gimbal-mounted cameras, GoPros, and cell phones.

That carrier’s back-to-back overseas deployments, which were completed in May this year, did not involve combat missions but were not without incident, extending ultimately across 16 months. The vessel spent months in port in Guam last year following a serious COVID-19 outbreak among its crew that devolved into a major political scandal that ultimately led to the resignation of then-Acting Secretary of the Navy Thomas Modly. There was also the crash of an F/A-18F from the Theodore Roosevelt into the Philippine Sea in June 2020, which we reported on at the time. Both crew members were fortunately able to eject safely.

The tone of the video, however, is in keeping with the high spirits of a squadron on a high after an otherwise successful cruise, which included two separate periods operating in the South China Sea, including sailing alongside its sister ship, USS Nimitz (CVN-68), apparently to send a message to China, which had been increasingly flexing its military muscles in this hotly disputed region.

The result is no-holds-barred access to the daily routines of a deployed squadron, starting with getting kitted-up, the ever-dramatic cat shots (set here to the sounds of Mötley Crüe), all the way through to live weapons drops on the training range, dogfights over the Pacific with Hawaii-based U.S. Air Force F-22 Raptors and Indian Su-30MKI Flankers, and the downtime in the squadron's ready room.

During its WESTPAC cruise, VFA-154 was one of four F/A-18 squadrons aboard the Theodore Roosevelt, but the footage is really all about the “Black Knights” and truly captures the drama, adrenalin, and precision of carrier aviation.

From around the 06:38 mark in the video there are some exceptional captures of aerial refueling from the cockpit of the Super Hornet, emphasizing the exacting art of putting the probe into the basket, whether the tanker is an Air Force KC-135 or KC-46 or one of the carrier’s own F/A-18Fs outfitted with a buddy pod. There is even video of a couple of Super Hornet aerial refueling fails, with the basket tearing away.

The air-to-air sequences featuring joint exercises with Indian Air Force Su-30MKI and SEPECAT Jaguar combat jets are also especially noteworthy. These clips were taken during March of this year when the Theodore Roosevelt Carrier Strike Group and its embarked Carrier Air Wing 11 were operating in the U.S. 7th Fleet area of operations. As well as the Indian jets, U.S. Air Force F-16s are briefly seen performing a flyby of the carrier, apparently the same heavily armed jets that arrived from their base in Japan for a show of force in the South China Sea in April.

Other notable exercises include VFA-154’s participation in the Air Force-led Exercise Northern Edge, which provided an opportunity for some spectacular low-level flying over Alaska’s snow-capped mountains and mighty glaciers. That was back in May, when the “Black Knights” joined the U.S. Pacific Air Forces (PACAF) maneuvers over the expansive Joint Pacific Alaska Range Complex and the Gulf of Alaska.

On top of all this, there are the carrier traps — still, in many ways, the litmus test of a naval aviator’s proficiency — night-time sequences including both full afterburner and gunnery, as well as operations from a rain-lashed carrier deck as the Theodore Roosevelt passes through a Pacific storm.

Finally, we see VFA-154’s fly-off from the carrier and the squadron’s emotional return to its home station at Naval Air Station Lemoore, California.

While there may not be a shortage of exhilarating video shot from inside the cockpit of Navy Super Hornets and various squadron cruise videos set a high bar in terms of both excitement and production standards, we think you’ll agree that the latest offering from the Black Knights is the best yet. 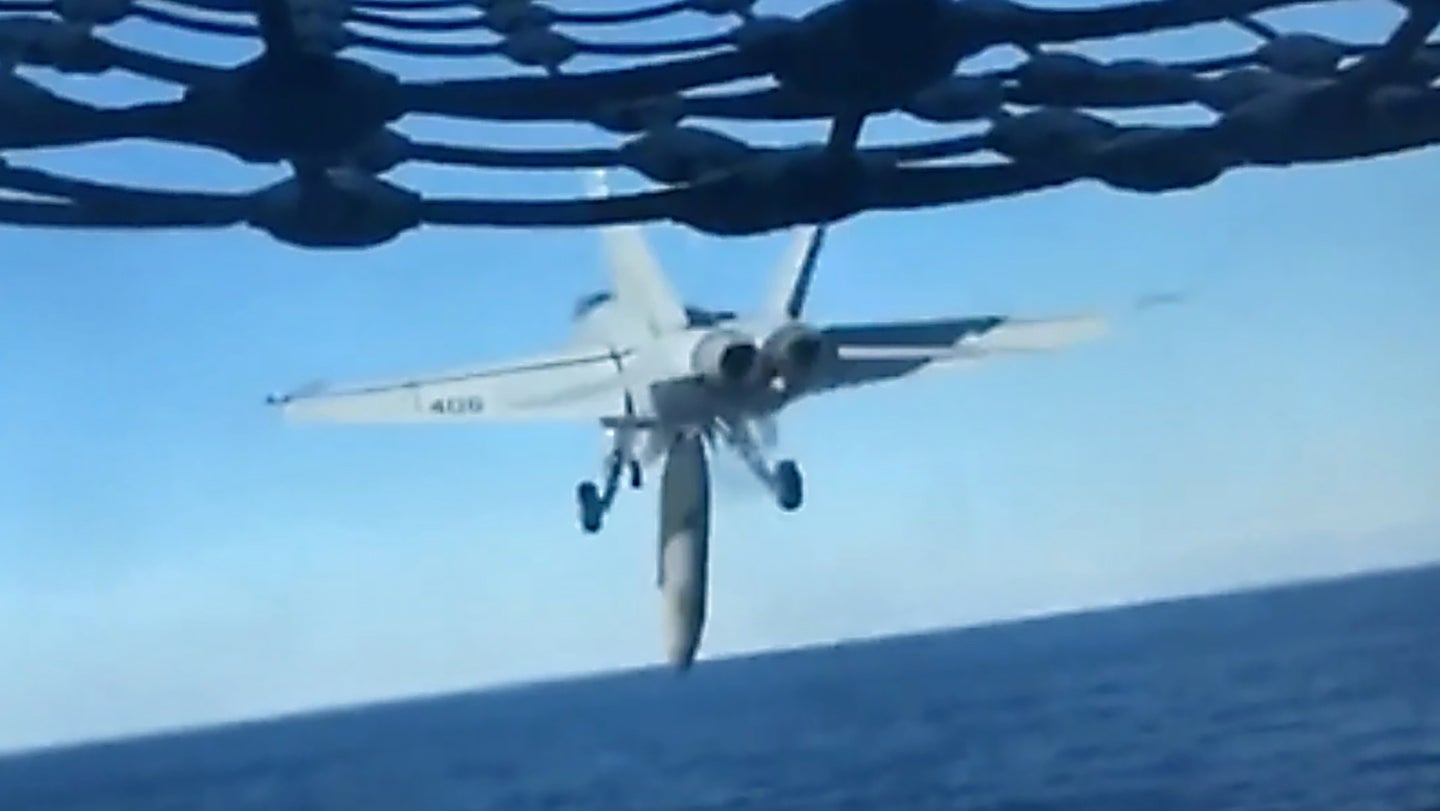 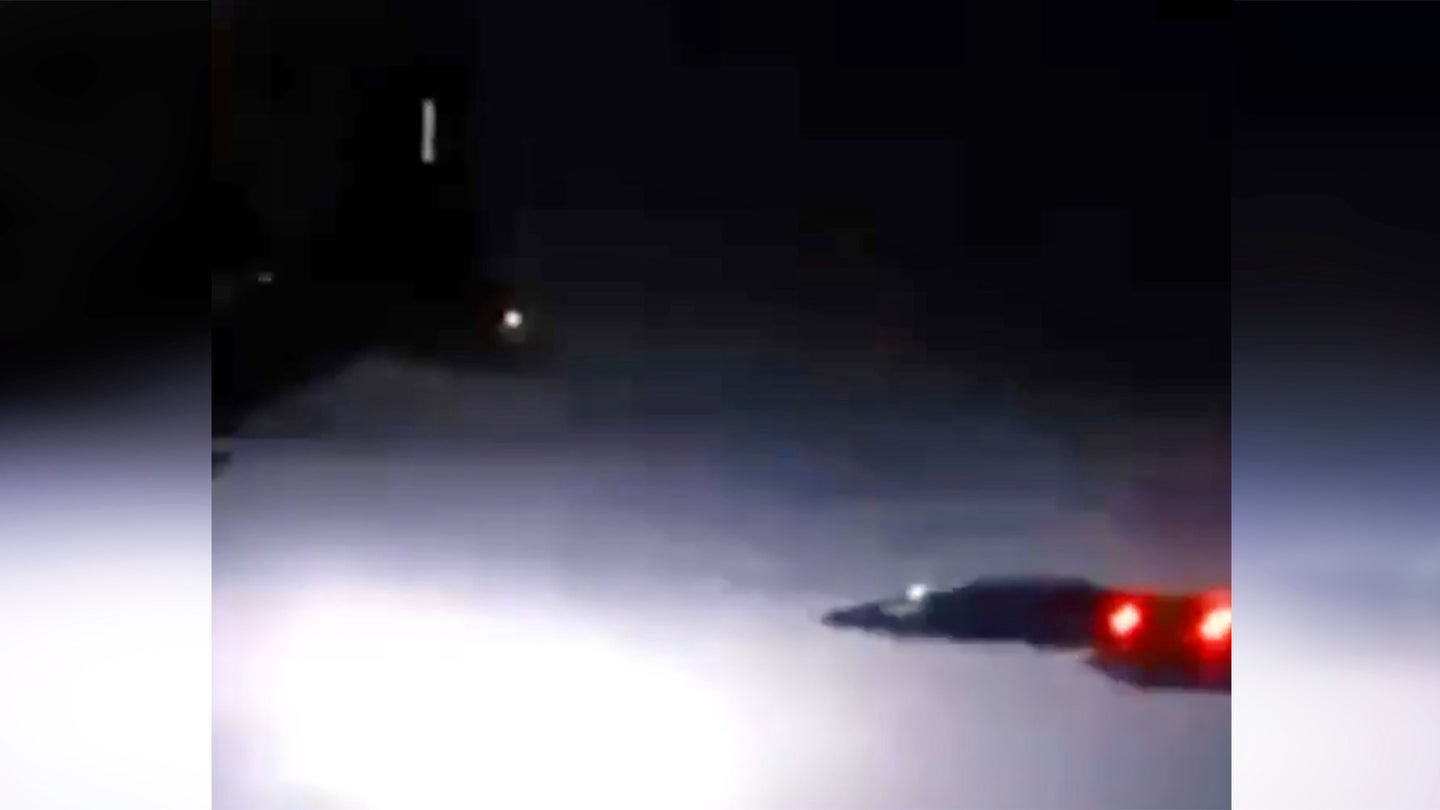 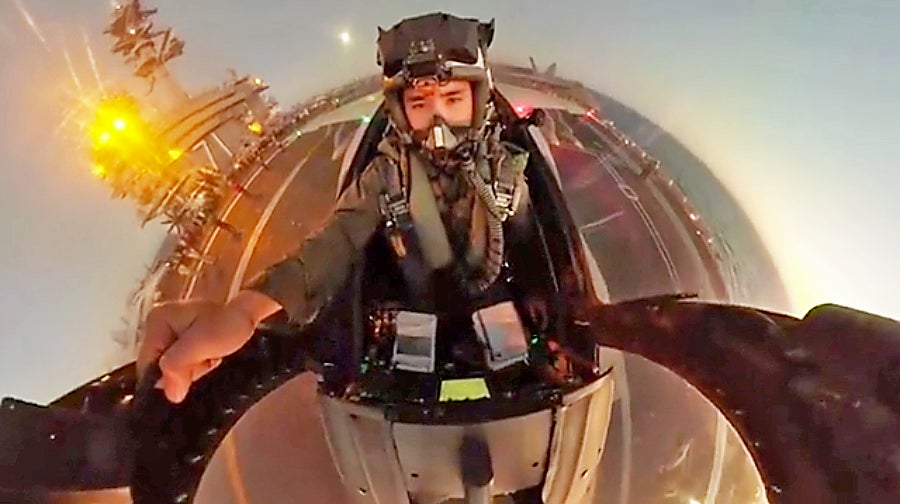 Who needs fireworks when you have a pair of F414 afterburning turbofans, a steam catapult, and an AIM-120 missile to fire off?