The Army Acquired Its Own Hovercraft In The 1980s. It Didn’t Go Well.

The Army bought LACV-30 hovercraft derived from a commercial model designed in Canada that ended up being ill-suited for hardy military tasks. 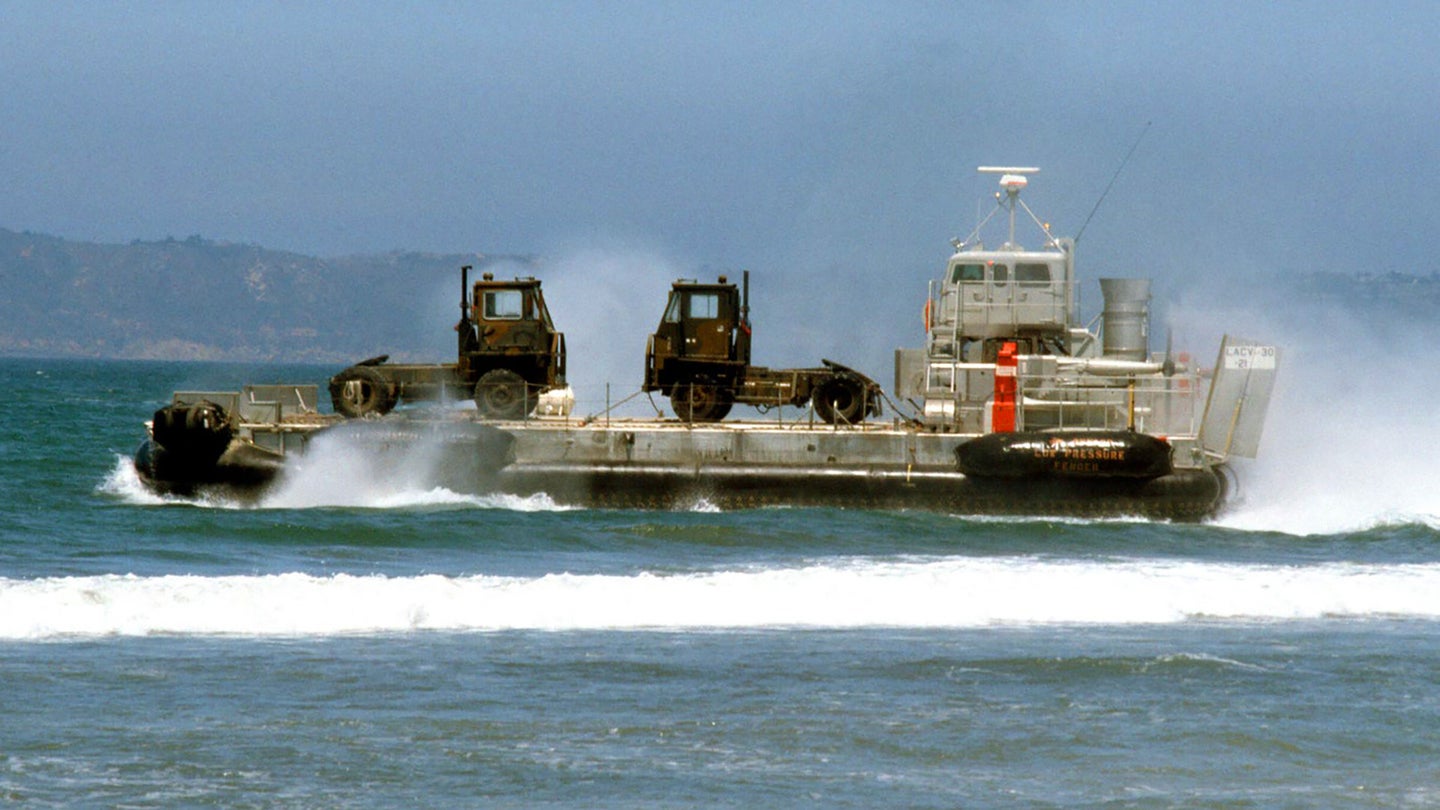 An old joke says that foreign militaries find the U.S. armed services baffling, in part because the U.S. Navy has its own air force and its own army—and the Navy’s army (the Marine Corps) has its own air force. Not to be outdone, the U.S. Army has its own navy. Since at least World War II, the Army has maintained a fleet of boats and ships (numbering more than 100,000 vessels in 1945), ranging from small landing craft to fairly large logistics support vessels. It has dozens of larger vessels and hundreds of small boats today. From 1983 to 1994, the Army even operated more than two dozen hovercraft.

The LACV-30 (lighter, air cushion vehicle, 30-ton payload) was adapted in the 1970s from a commercial hovercraft built by Bell Aerospace Canada, the Bell Voyageur. Some 40 feet wide and 80 feet long, it had an empty weight of around 65,000 pounds, according to globalsecurity.org. The hovercraft 'lighter' — a name given to flat-bottomed craft that moves people and cargo from moored ships — was powered by a pair of Pratt & Whitney PT6T Twin-Pac gas turbines running on standard JP4 jet fuel. The craft could carry up to 30 tons of payload, including two 20-foot containers, pallets, and small vehicles — though, unlike the actual Navy’s landing craft, air cushion (LCAC), it could not handle a main battle tank such as the 60-ton-plus M1A1, or even the 50-some-ton M60s that were still in service as late as 1991.

What the LACV-30 lacked in capacity it made up for in speed. Sources vary, but most put the cruise speed at between 50 and 60 mph, or 44 to 52 knots, while burning 260 gallons/hour. It had little in the way of self-defense capability, and its relatively small air cushion left it vulnerable to rough seas, limiting it to operations in sea state three — that is, in chop with waves heights of around three to four feet. On the other hand, its relatively small size and aluminum structure allowed it to be broken down for transport and reassembled when it reached its operating area.

Unfortunately, the program never really gained any momentum, despite spending around $140 million (in 1986 dollars) to acquire 26 of them. Bell Aerospace Canada's Voyageur design underlies the LACV-30. By contrast, the JEFF A/B, which grew into the U.S. Navy's landing craft, air cushion/LCAC design, was a U.S. Bell project run out of its operation in New Orleans, Louisiana. The two craft were developed more or less in parallel, but with little apparent cooperation between the Bell divisions.

According to a 1977 report from the then-General Accounting Office (GAO), LACV-30 operational testing was a bit of a mess. Instead of handing prototypes (based on the civilian Bell Voyageur craft) over to the Army’s operational testing and evaluation unit—the Armor and Engineer board—a subordinate unit of the Army Training and Doctrine Command (TRADOC), managed the process.

It seems the Armor and Engineer Board team made a hash of the testing. According to the GAO report, the Army decided not to test the LACV-30 in the sort of conditions that might have made it useful:

For example, Army officials said operational testing will not include tests of the vehicle's capability to operate

In fairness, it’s worth noting that TRADOC said it expected the missing tests would be done during developmental testing, once initial units had been procured, and that, anyway, there was plenty of such data from the civilian version. But, as the GAO added: "It is doubtful that civilian experience with a version of the LACV-30 was obtained under the types of conditions encountered during military amphibious operations. Similarly, the skills of civilian operators and maintenance personnel may not have been comparable to those of their military counterparts."

The Army eventually acknowledged that even its inadequate initial testing raised serious doubts about the vessels’ capability. Globalsecurity.org says the Army admitted “the LACV-30’s reliability, availability, and maintainability characteristics were inadequate” and it was likely unable to complete its designed two-hour shift “without a system or mission failure.”

Despite these problems, the Army stood up two operational units, the 8th and 331st Transportation Companies. According to a history of the 8th, training began at Fort Story (today, part of Joint Base Little Creek, Virginia) in 1983, before the 8th was activated as an air cushion transportation company in October 1984. The unit had been variously a ground transport, helicopter, and boat company off and on since World War II.

The company’s LACV-30s participated in exercises throughout the late 1980s, even working with the 6th Marine Expeditionary Brigade at Camp Lejeune in June 1988, training for hostage rescue missions. But the maintenance issues with the lighters, combined with their operational limitations, ultimately were too, uh, deflating, and the Army pulled the plug on the 8th and 331st, as well as the LACV-30, all of which were decommissioned in 1994. The vehicles were sold to a company in Alaska, but environmental concerns — especially noise — ultimately made them impractical there. At least one decrepit example wound up for sale in Louisiana in recent years.

It’s probably no wonder, then, that when the Navy was looking for a hovercraft to call its own in the mid-1980s, it evaluated and then quickly discarded the LACV-30 in favor of Bell Textron’s much more capable LCAC. Part of the issue is that the Army couldn't decide whether its hovercraft would be a true lighter (usually an unpowered barge) or a landing craft (a seagoing small transport) that can land on a contested beach. Both are used to move people and cargo from larger vessels, but seakeeping, speed, and — sometimes — self-defenses differentiate them. The LACV-30 compromised in too many ways, while the LCAC was designed with seakeeping and heavy lift in mind from the outset.

Today, even as the LCAC is being phased out, its latest evolution, Bell's Ship-to-Shore Connector LCAC 100, has begun to join the fleet. Hovercraft continue to have their uses, but a poorly performing one that depends on nearly ideal conditions could be considered evidence by those who contend that it’s not always best to let an army have its own navy.