The ability to rapidly load large hypersonic missiles onto Air Force bombers that are operating from remote airfields is of increasing importance. 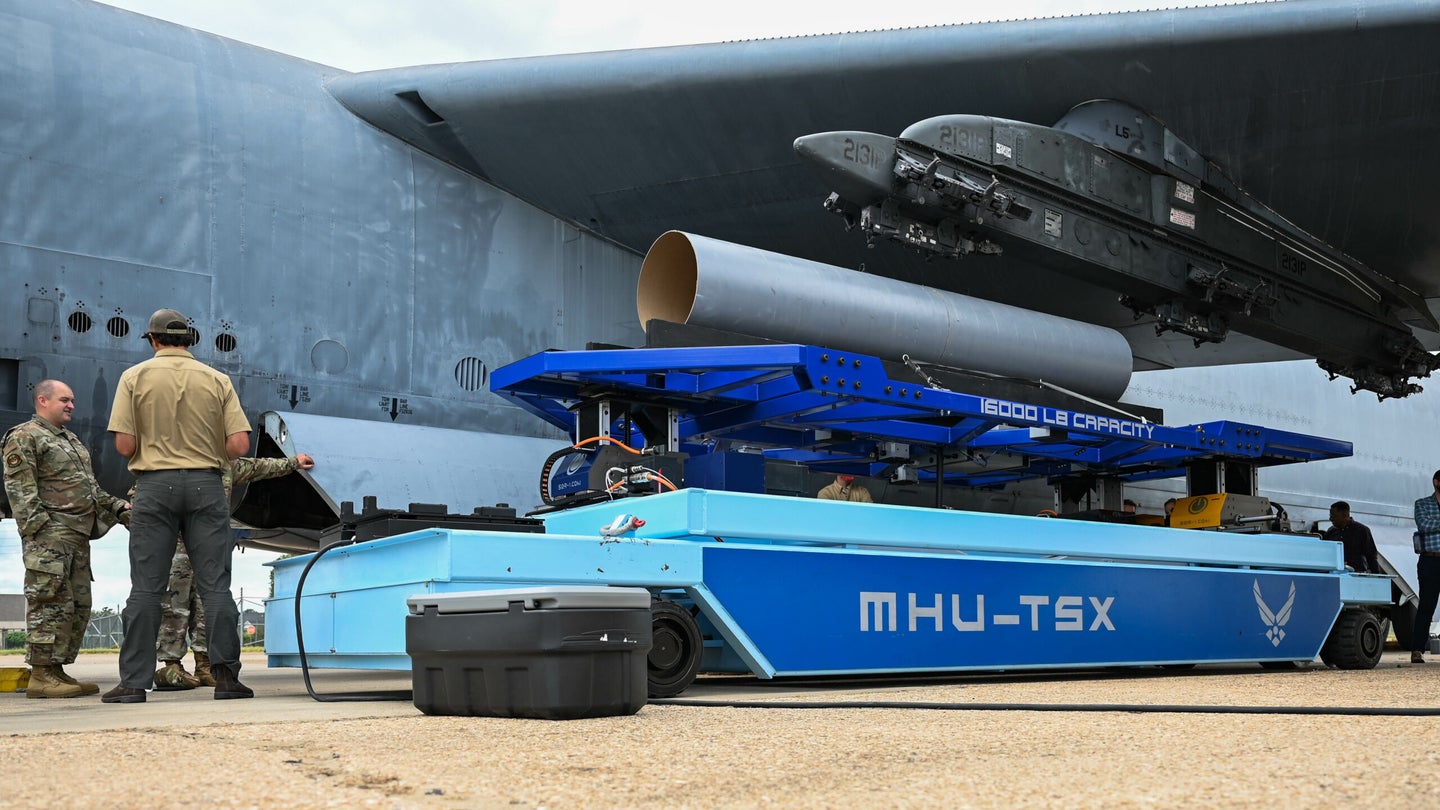 Picture the scene, a decade or so in the future. A close ally of the United States in the Asia-Pacific region has come under attack from a regional power, and the U.S. Air Force has deployed bombers to the area. These aircraft are stationed at established airfields but without the major infrastructure to support large-scale bomber operations, to reduce the chances of having these assets knocked out on the ground.

After their arrival in theater, the bombers need arming, but with reduced ground crew and equipment on hand, it’s not going to be easy to rapidly load the aircraft with the huge hypersonic weapons that might have to be employed in retaliation. Enter the MHU-TSX, a robotic loading system that does that job more quickly, and almost autonomously, hauling these big weapons around and loading them on aircraft even at the kinds of austere airfields from which the Air Force is likely to fight future campaigns against peer or near-peer adversaries.

While hypersonic missiles are still some ways away from joining the Air Force’s arsenal, their development represents a major focus for the service—and one with potentially game-changing significance. For the most part, however, these weapons are seriously big, demanding different approaches to storing them, moving them, and ultimately loading (and unloading) them from aircraft.

The AGM-183A Air-launched Rapid Response Weapon, or ARRW, for example, for which the B-52H Stratofortress is set to be the primary launch platform, is set to be carried on a new Boeing-developed underwing pylon, named Hercules, each of which will be able to hold three ARRWs or combinations of other ordnance totaling up to 20,000 pounds. The ARRW, and other weapons, will likely demand new loading systems.

With this and other weapons in mind, the Air Force has been testing out a prototype of the MHU-TSX, a robotic loading system developed by Square One Systems Design. The Wyoming-based robotics development company describes itself as specializing “in the design and development of innovative automated systems, precision positioning devices, and robots for diverse industries.”

“You can attach a sensor package that allows the machine to operate with a high degree of autonomy,” said Viola. “Personnel would only need to supervise what it’s doing, which should make the loading process quicker.” Again, this plays squarely into the concept of austere operations, permitting bomber sorties to maintain their tempo even with a reduced ground crew complement on hand.

Compared to legacy systems, the prototype MHU-TSX is based around a non-hydraulic actuation process, which translates to more precise movements. While careful handling of munitions is fundamental wherever a bomber is operating, this factor can come into play above all when aircraft are operating from austere airfields, which are unlikely to be perfectly flat.

Even when operating bombers from established bases, the MHU-TSX could provide significant advantages. At Andersen Air Force Base, Guam, for instance, there are no facilities to pre-load the Common Rotary Launchers (CRL) that are used to provide Air Force bombers with their cruise missiles or to store these launchers pre-loaded for more rapid installation on an aircraft. It can take ground crews nearly half a day to load missiles, one at a time, onto launchers already installed in the bombers’ bomb bays. That also gives some indication of how laborious and time-consuming loading bombers' armaments can be, something that a mature version of MHU-TSX should address. In the meantime, Andersen is gaining a new Standoff Weapons Complex that will provide storage for pre-loaded CRLs, a project you can read all about here.

The prototype MHU-TSX was tested recently by the 2nd Maintenance Group at Barksdale Air Force Base, Louisiana, home of Air Force Global Strike Command’s 2nd Bomb Wing flying the B-52 and also responsible for training all crews for the veteran bomber.

The effort resulted from a collaboration between the AFWERX innovation initiative, a technology incubator the Air Force established in 2017, and Square One Systems Design. AFWERX is intended to develop partnerships between the service and tech specialists in the private business sphere, and this is not the first robotics-related project it has fostered.

“We were aware that weapons loading was an ongoing area that the Air Force would like to see modernized and we’d actually done some early concepts,” said Bob Viola, the director of engineering at Square One Systems Design. “AFWERX was our conduit in, then Global Strike Command and Material Command became responsive to our ideas, from there becoming our partners within the program.”

Meanwhile, the veteran status of the B-52 within the Air Force inventory is well known, but what’s perhaps less evident is that much of the support equipment needed for it to complete its mission is similarly dated.

“The design of our current equipment is between 50 to 60 years old,” explained Mike Black, an Air Force Global Strike Command munitions division modernization branch chief. Not only is equipment such as weapons loading systems old, but increasingly it will be redundant as new weapons come online, especially the new types of heavy hypersonic missiles that are expected to form a key part of the future arsenal of the B-52, in particular.

Indeed, as long ago as 2018, The War Zone examined why the B-52 lends itself so well to the role of hypersonic weapons ‘truck.’ Since then, the AGM-183A ARRW, has put itself on course to be the Air Force’s first operational air-launched hypersonic weapon, although early testing from the B-52 has not gone entirely smoothly.

At this stage, the MHU-TSX, as tested at Barksdale, is very much an early iteration, with the trial aimed primarily to get feedback from the munitions squadron and other personnel at the base, which will lead to improvements being made. According to an Air Force news release “revisions are expected,” for the design, but there is already confidence that MHU-TSX “is a step towards an automated machine that could revolutionize aircraft maintenance Air Force-wide.”

The Air Force, meanwhile, is confident that AFWERX is the right framework within which to develop a product of this kind. Mike Black described the current relationship between the Air Force and Square One Systems Design as “about as close as you can get to the ideal scenario for AFWERX and their business model.”

How much longer it will take to field a fully proven and operational version of the MHU-TSX is not clear, but it’s evident that the twin demands of heavy hypersonic stores and out-of-area operations mean that equipment of this kind is likely to be afforded a high priority in the near future. It would not be the first Air Force program that stresses modular, deployable equipment of the kind needed for these kinds of missions.

All in all, the MHU-TSX could provide the Air Force bomber fleet with some huge advantages, helping reduce the total manpower, as well as the infrastructure, necessary to conduct bomber operations from austere sites on short notice, which could make it easier to conduct those kinds of deployments in general.