Take a look out the window the next time you fly on an airliner and there’s a very good chance you’ll see winglets — the typically upturned wingtip devices at the ends of the wings designed to improve efficiency by reducing drag. As well as being commonplace on new designs, winglets have been retrofitted to a variety of older aircraft, too, like the ubiquitous Boeing 737 series, to improve performance and lower fuel costs. One of the types that doesn’t have them is the U.S. Air Force’s hard-worked fleet of KC-135 Stratotanker aerial refuelers and their many derivatives. But the reality is that winglets were tested on the KC-135. In fact, the type played a major part in pioneering the concept. The results were overwhelming. As such, it’s maddening to comprehend that the KC-135 never got winglets decades ago.

Much of the drive that led to a KC-135 flying with winglets — as early as 1979, long before they became commonplace — was the energy crisis of that same decade. The effects of the Yom Kippur War caused interruptions in exports of Middle Eastern oil and Western countries began to feel the pinch, with another worsening of the situation in 1979, triggered by the Iranian Revolution and the events that followed. As the crisis drove up fuel prices, the effects were felt keenly by the gas-thirsty Air Force.

At NASA’s Langley Research Center, meanwhile, Dr. Richard T. Whitcomb had come up with the winglet concept, noting that its addition to a wingtip reduced drag and in the process saved fuel. Interestingly, Whitcomb had also been responsible for developing the ‘Coke bottle’ area-ruled fuselage in the 1950s, before coming up with the supercritical wing that’s another efficiency-boosting feature of many jet transports today. As such, his is a name that certainly deserves to be better known.

After the successful wind-tunnel tests of the Whitcom winglets at Langley, a memorandum of understanding was signed in 1976 for a joint development program between NASA and the Air Force. In June the following year, Boeing received a $3-million contract to develop, install, and then test a set of winglets on a KC-135. At this stage, the wind-tunnel tests showed that the modification should reduce total drag by 8 percent during cruise flight. Based on that improvement, the Air Force was expected to cut annual fuel demands by a figure of an incredible 37 million gallons across the entire fleet.

Work on the winglets ran for much of the first half of 1978 and, before the end of the same year, the Air Force’s NKC-135A testbed, serial number 55-3129, had been transferred to NASA at Edwards Air Force Base, California, for the modifications.

By May 1979, it was time to install the winglets, which had been produced by converting the wingtips of another KC-135A, serial number 55-3126, a former Speckled Trout VIP transport. Each winglet weighed around 150 pounds, was approximately 9 feet high, and could be set to different angles of incidence to gather a range of test data. A long boom containing air-data measuring equipment was added to the nose, completing 55-3129’s new look, and this provided real-time flight-test data that was presented on a CRT display in the cockpit.

Between July 1979 and January 1981, the winglet-equipped 55-3129 completed 39 flights and over 170 flying hours in this configuration, demonstrating a 6.5 percent fuel saving throughout the aircraft's usual flight regime, equivalent to nearly 45 million gallons per year across the entire fleet. At the same time, the reconfigured aircraft also demonstrated improved takeoff performance and fuel offload capability.

Despite the obvious promise of the winglets, the Air Force was not interested in the modification and instead chose to take an alternative path toward fuel savings. This was the Fuel Savings Advisory/Cockpit Avionics System (FSA/CAS), a flight-management system based on a new computer.

Compared to the winglets, the advantages of FSA/CAS were disappointing — just a 2 percent saving on fuel, and this was only achieved with the KC-135 flying a specially tailored, airliner-style flight profile, which had little in common with the Stratotanker’s normal missions. On the plus side, the FSA/CAS update, which was installed fleet-wide, did bring with it the MIL STD-1553 data bus, making it easier to introduce future cockpit upgrades.

As for 55-3129, the aircraft had lost its distinctive winglets before the end of 1981 and was returned to the Air Force for various other test duties.

IRobert S. Hopkins III, who flew 17 different variants of KC-135 tankers, EC-135 airborne command posts, and RC-135 strategic reconnaissance aircraft during his Air Force career, and now writes extensively about these aircraft and others, recalled to The War Zone that NASA, Air Force Logistics Command (AFLC), and Air Force Systems Command (AFSC) were “all for the winglets. They reduced drag consistently over the entire flight spectrum, meaning they saved fuel from takeoff to landing.”

“Strategic Air Command (SAC), however, was less interested in fuel savings per se than the future computerized expandability of the KC-135 and opted for the FSA/CAS,” Hopkins explained. “Unfortunately, that was built on software that mimicked an airliner step-climb profile that was utterly irrelevant to the KC-135 mission profile of takeoff, air refueling, nav leg (all at constant altitude), and landing practice. Fuel savings were in fact less than the promised 6%, averaged 2%, and the damn thing never worked.”

“Programming it during preflight was a nightmare,” says Hopkins of the FSA/CAS. “It refused to accept the SAC flight profile as ‘invalid,’ so was a lot like being told ‘if your internet service is down please send us an e-mail.’ It could not be turned off, so I turned the brightness down to full dim to avoid looking at the darn thing.”

Had Strategic Air Command known, back in 1981, that the KC-135 fleet would still be serving as the most important part of the Air Force tanker fleet 40 years later, it’s impossible to think that the savings promised by a winglet-equipped fleet of Stratotanker-family aircraft wouldn't have won broader support.

In the event, the Stratotanker family did undergo various other important modifications, most significantly the replacement of the older aircraft’s jet engines, four Pratt & Whitney J57s, with an equal number of more powerful and efficient CFM56s.

Other upgrades since then included Pacer Crag, which replaced various parts of the cockpit and fuel management system between 1997 and 2001.

With the Air Force now looking to keep at least a portion of its fleet of nearly 400 KC-135Rs flying until Fiscal Year 2040, and possibly for another decade after that, the savings in fuel costs after the introduction of the winglets many decades ago would have been absolutely massive, to say the least.

The fleet of RC-135 intelligence-gathering aircraft is also as busy as ever, monitoring potential hotspots around the globe, and would have similarly benefitted from the additional efficiency offered by winglet modifications. Although, not all those aircraft may have been able to receive the winglets because of where sensors and antenna are placed around the airframe.

As well as the Block 45 cockpit upgrades intended to keep the KC-135R viable potentially through to 2050, the Air Force is exploring other capabilities for the venerable Stratotanker, too, including serving as a communications node for other platforms. With an eye on the increasing vulnerability of tankers and other support assets to enemy air defenses, the Air Force is also increasingly looking at ways of protecting its KC-135s, too, including a laser defense system as well as loyal wingman drones.

In the meantime, the near-antique C-135 family is as busy as ever and the introduction of the new KC-46A Pegasus to the aerial refueling community has been painful, to say the least. With that in mind, it seems the Air Force really did miss a big opportunity when it had the chance to equip these aircraft with winglets back in the early 1980s. The modifications would have paid for themselves many, many times over by now, and then some. 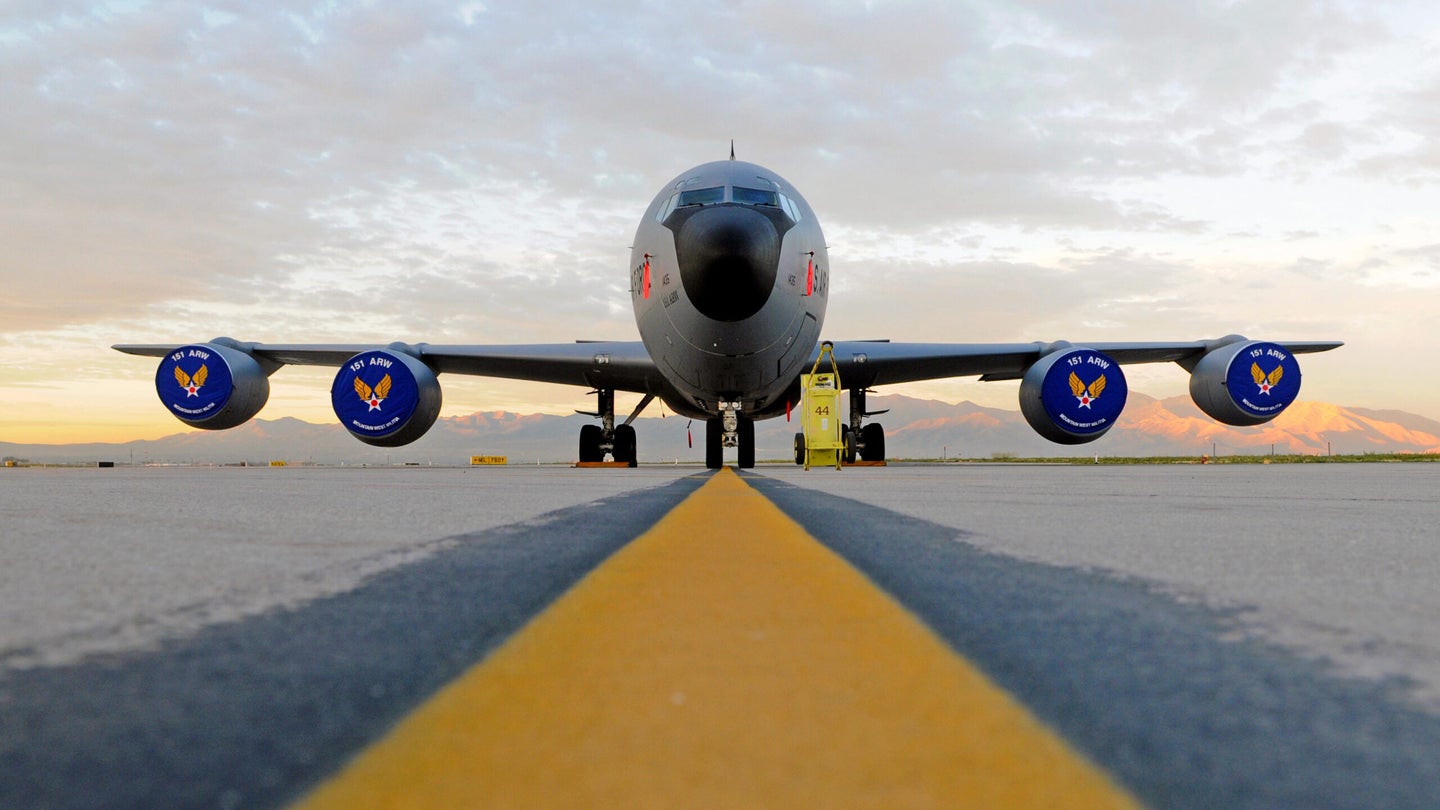 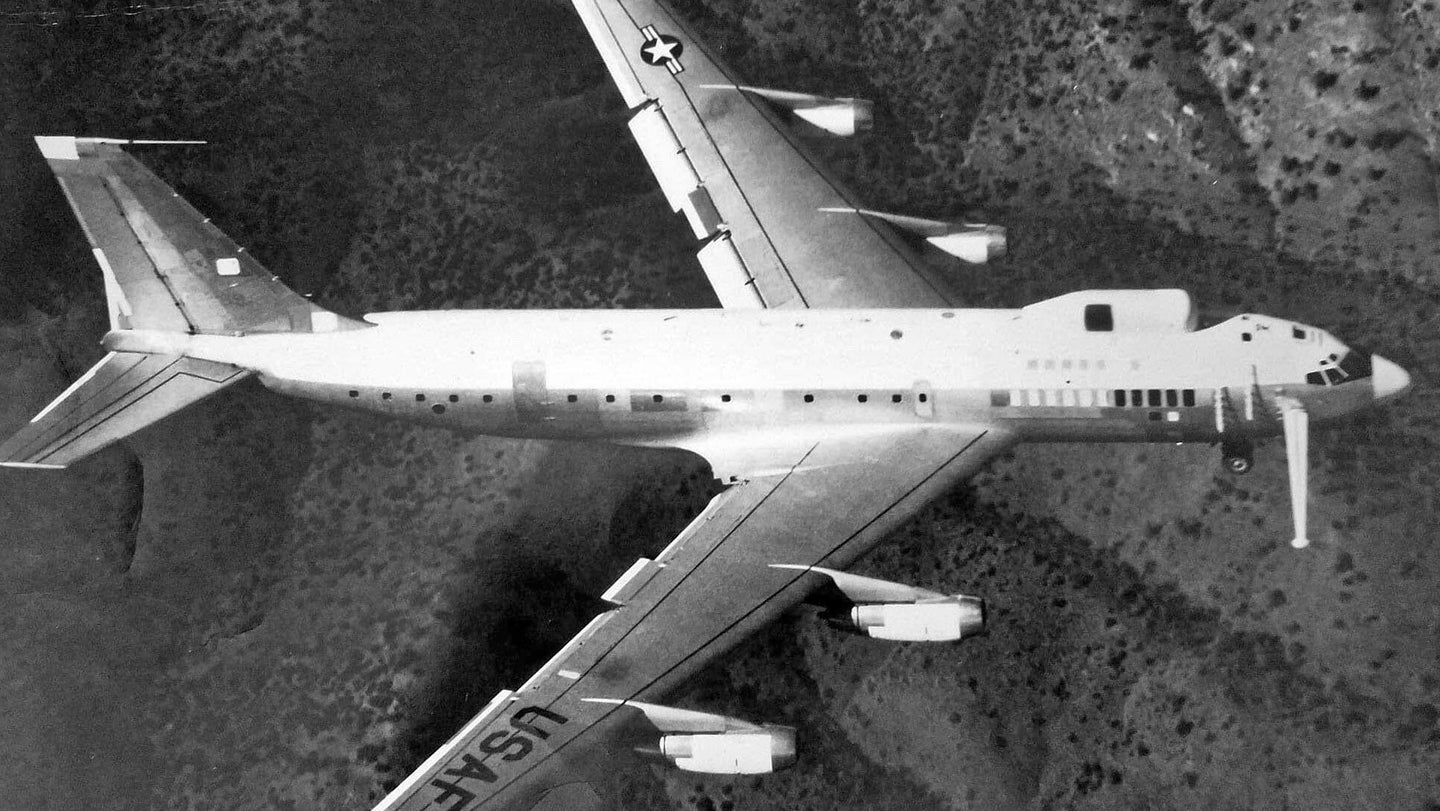 The KC-135A Stratotanker has been reworked into many different configurations, some of which are bizarre, to accomplish a dizzying array of missions. 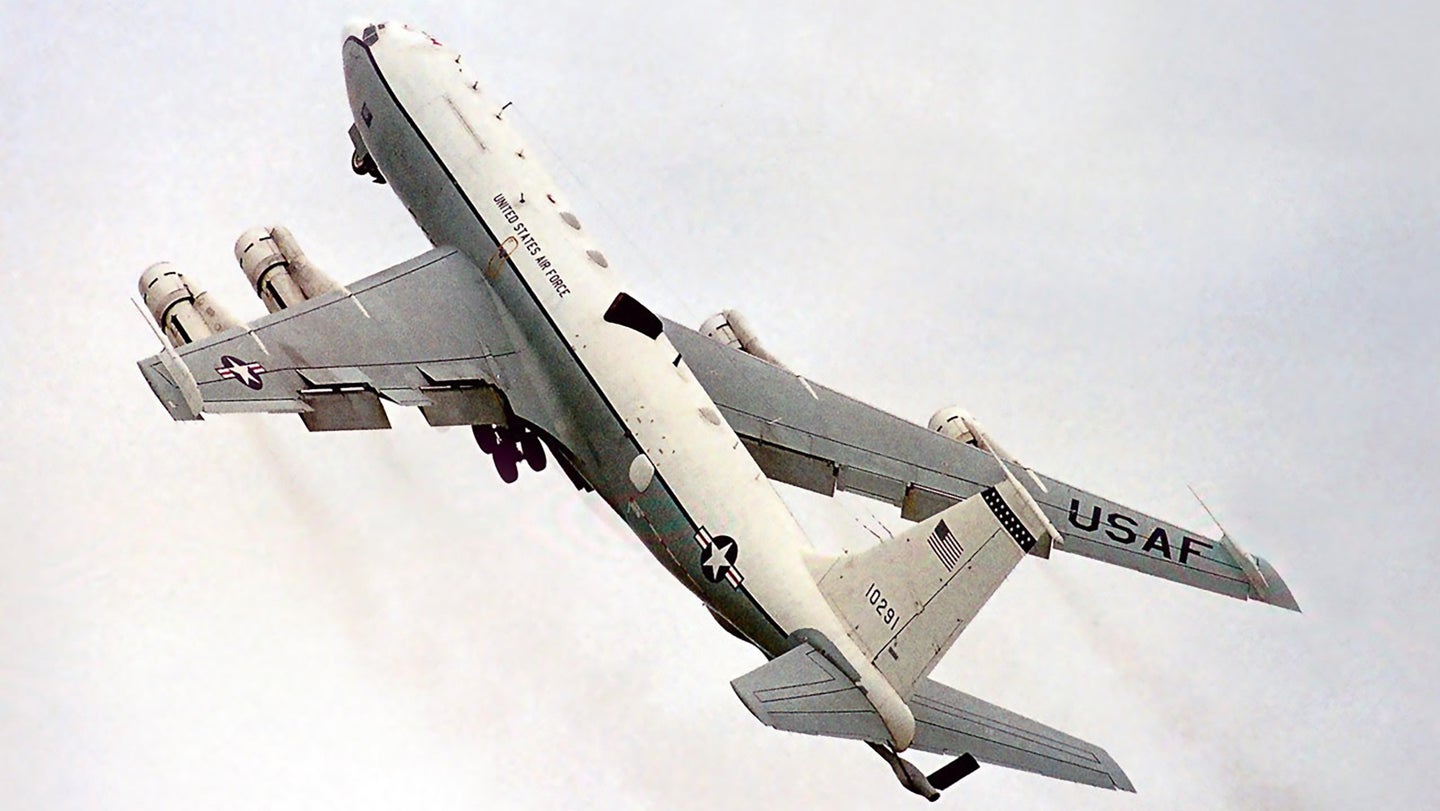 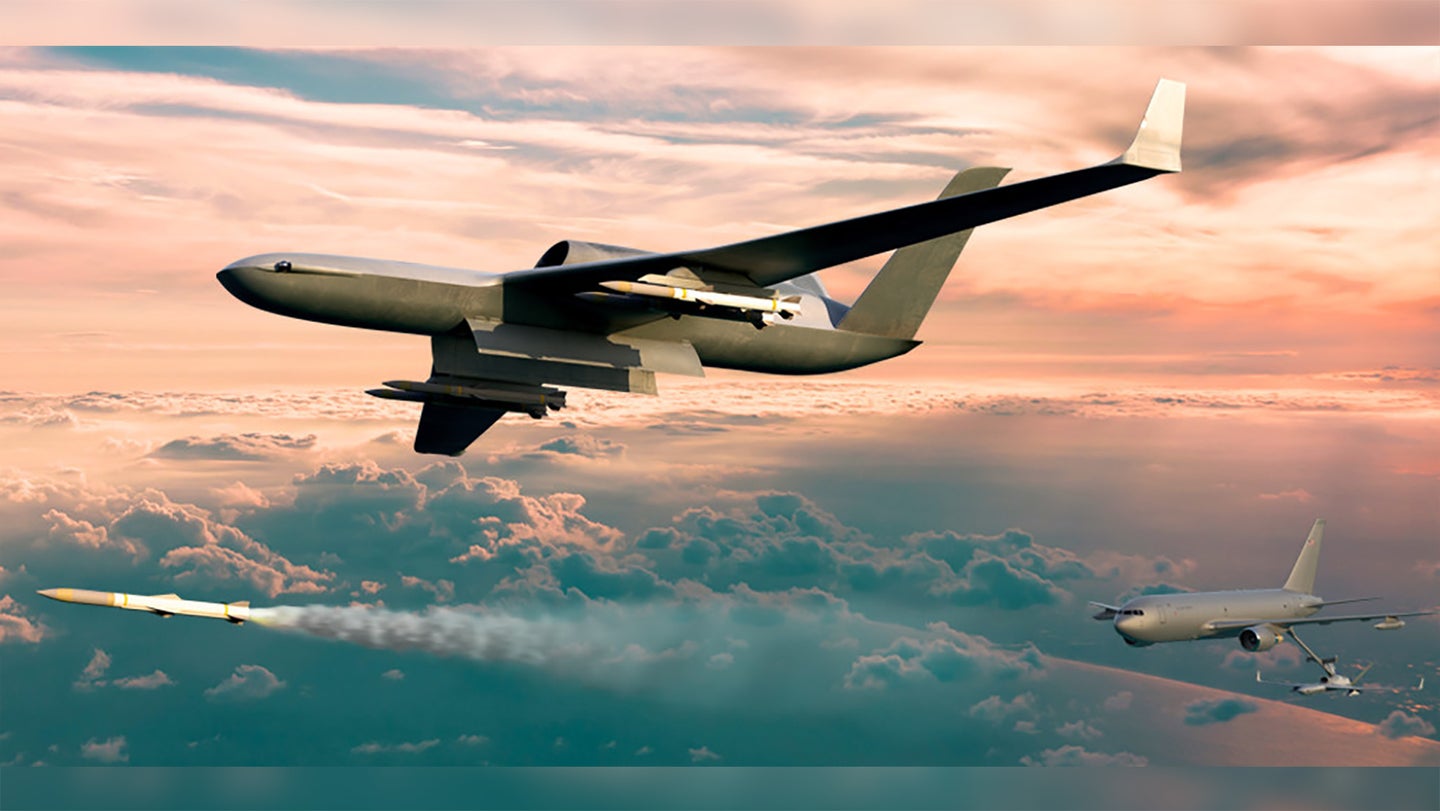 The “Defender” concept is a potentially promising way to address the increasing vulnerability of Air Force tankers and other lumbering support planes. 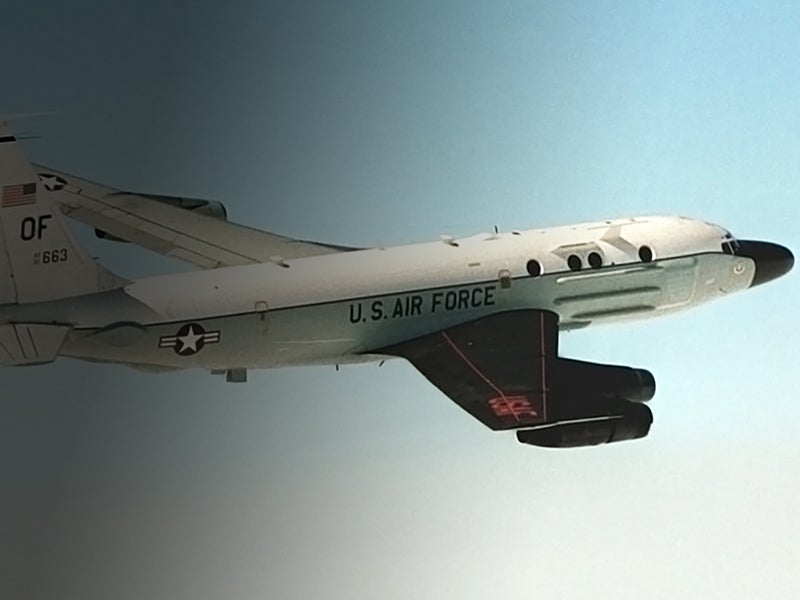