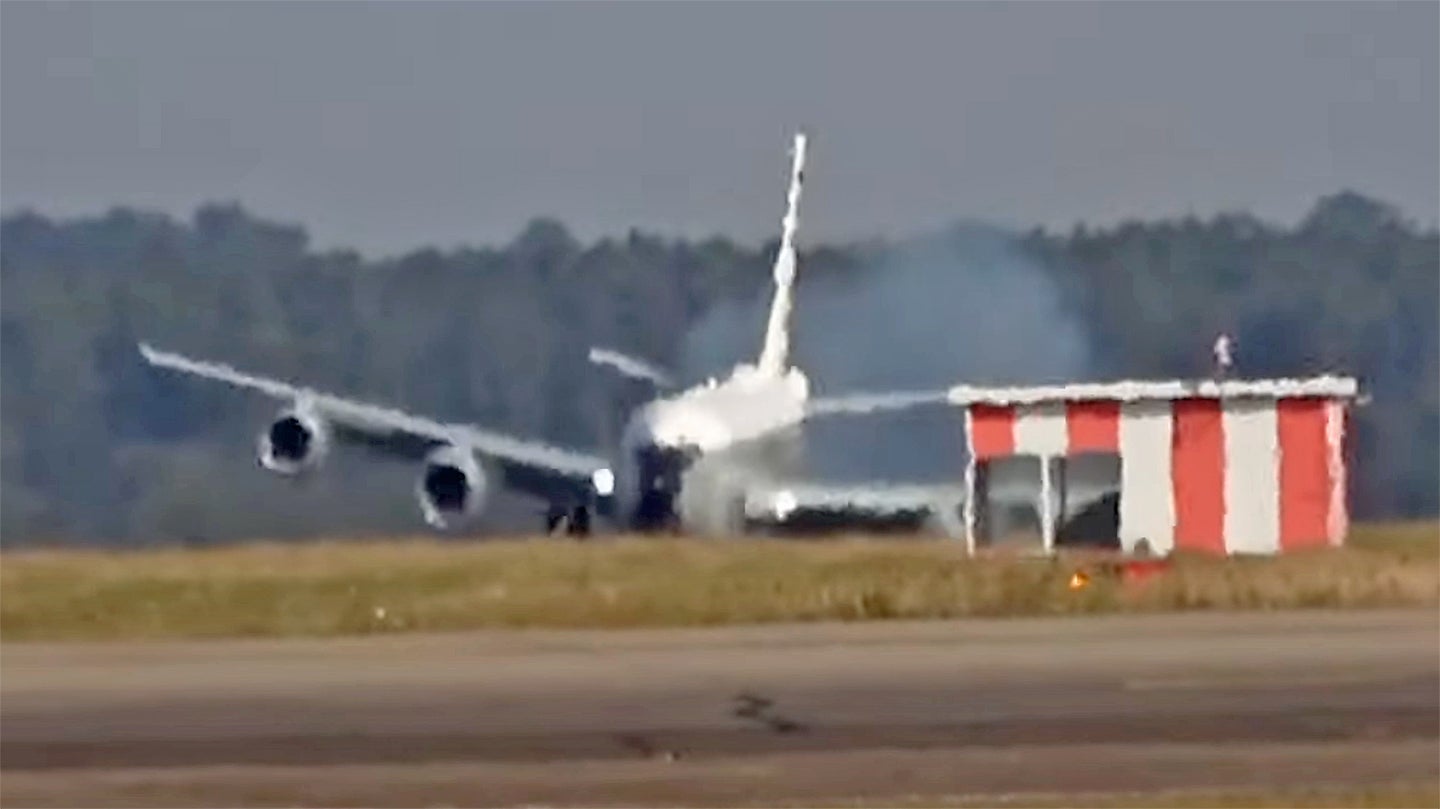 On September 7, 2021, an RC-135U Combat Sent electronic intelligence-gathering aircraft, one of just two in existence, made a frightening crosswind landing at RAF Mildenhall in England. The RC-135 had returned from an intriguing mission that saw the spy plane circumnavigate the border of Russia's Kaliningrad exclave.

The video comes to us from the YouTube channel Airshow World, via a heads up from our friend and a must-follow on Twitter, @thenewarea51. It shows the RC-135U, often lovingly referred to as 'U-Boat' due to its designation, making a crabbed approach to Runway 28 at RAF Mildenhall. It then appears to struggle to 'kick-out' the crab on landing, with its left wing suddenly dipping in a highly concerning manner. If the crab is not relieved and the aircraft's nose is not pointed down the runway on touchdown, at least to a substantial degree, it is very hard on the aircraft, and especially the landing gear, putting major lateral loads on the mains.

The crew subsequently wrangled the RC-135 and straightened it up during its roll-out, but its rudder is still seen kicking around frantically even after it has come to a slow taxi. While the landing looks very "eventful" for the pilots, the folks in the back must have had a very chilling experience.

If the video does not automatically advance, the landing in question occurs at 17:55.

A substantial number of the venerable C-135 family were re-engined, including the RC-135s, with low-hanging CFM56 high-bypass turbofan engines. While this greatly improved the aircraft's performance and reliability, it made the type more sensitive to bank angles on landing as the outboard engines hung so much lower than their predecessors.

One KC-135 pilot told me that they are limited to just a few degrees of bank on landing, any more could cause 'pod (nacelle) strike' which is a very unwelcome and dangerous occurrence. As a result, a wing-low landing is not really an option to correct for a crosswind. That's why the video is especially concerning—seeing a jet that is not supposed to bank so much on touchdown, doing so.

The winds at the base at the time of the landing were at about 10 knots directly perpendicular to the runway. So the crosswind component would have been pretty much total. There may have been gusts that would have complicated the situation, although we can't say for sure.

Still, at least for the KC-135, which is the cousin of the RC-135, the crosswind limit is 25 knots. So, barring any major gusts, this landing occurred well below that limit.

With all that in mind, it really isn't clear what occurred here. Was it just a crosswind landing that went a bit off the rails, or perhaps some sort of flight control issue? We have reached out to some of our contacts with experiencing flying these aircraft to provide some insights, and will report back when they do.

Our friend, veteran RC-135 pilot, writer of the KC-135 'bible,' and War Zone contributor, Robert Hopkins, told us that although the building and berm block a clear view, the aircraft appears to have made a three-point landing or even landed on its nose wheel, which could have accounted for the wobble rollout. Damage to the nose wheel and/or its steering is possible.

The way the jet lurched forward, I think the pilot flying flared high, realized it, then pushed the nose over to try and land, the other pilot took over, and the best s/he could do was a 3-point plant with (likely) a pod [engine necelle] drag. The best thing to do in a premature flare in a crosswind is to go around. Never push the nose down.

As to if the aircraft was indeed damaged, we don't know for sure, although one Twitter uses claims it was with the following picture, which we cannot authenticate at this time: