The Air Force wants to buy dozens of new tankers to fill a gap between the last expected deliveries of KC-46As and a future advanced design. 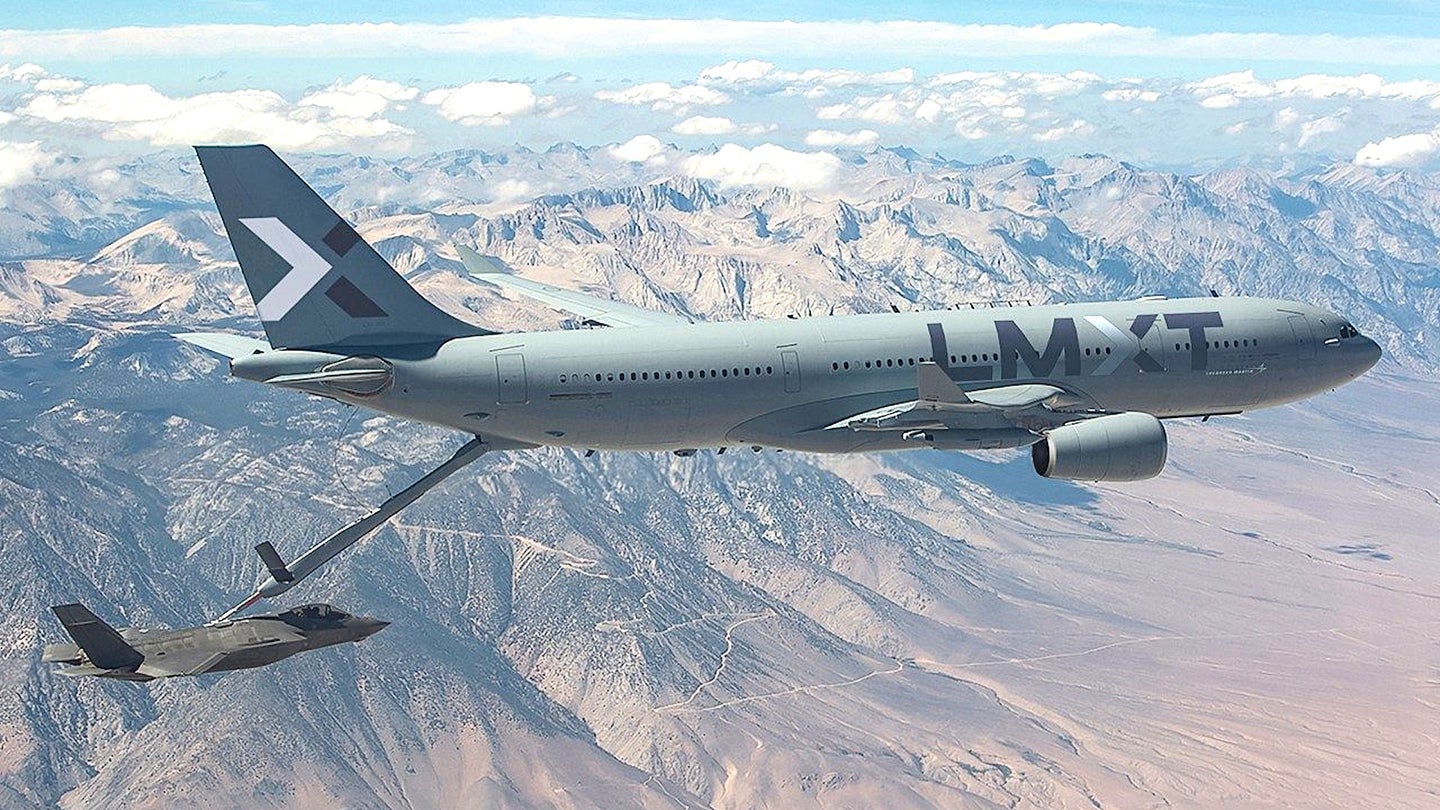 Lockheed Martin has formally unveiled its proposal, dubbed LMXT, to meet the U.S. Air Force's requirements for additional aerial refueling tankers to "bridge the gap" between the last expected deliveries of Boeing KC-46A Pegasuses and the acquisition of a future advanced tanker, a project currently referred to simply as KC-Z. The LMXT is based on the popular Airbus A330 Multi Role Tanker Transport, or MRTT, but has a number of features specifically for the Air Force, including additional networking and defensive capabilities. It also has the ability to carry 13 tons of additional fuel over the standard MRTT, for a total maximum load of just over 135 tons of gas, both for its own use and to dispense to receiver aircraft.

The Maryland-headquartered defense giant officially unveiled its LMXT offering on Sept. 17, 2021. The Air Force Life Cycle Management Center issued a formal Sources Sought notice for the Bridge Tanker Program, also referred to as KC-Y, back in June. The service says it will only consider "non-developmental" proposals based on commercial aircraft as part of this competition, which is expected to officially kick off by the end of next year.

The expectation is that whatever tanker it selected will help the Air Force finally replace its aging fleet of just under 400 KC-135s, as well as its smaller fleet of KC-10As, the latter of which are already being retired. At present, the service only expects to buy 179 KC-46As across 13 production lots. Boeing is widely expected to propose additional KC-46A orders for the KC-Y competition, which could lead to the winner getting a contract to build up to 160 new aircraft.

Lockheed Martin says the LMXT, which it would produce in the United States, builds on the proven capabilities of the A330 MRTT and will also include the more recently developed automatic boom/air-to-air refueling (A3R) system. Airbus has said in the past A3R improved the speed at which A330 MRTTs can link up with receiver aircraft and provides additional margins of safety for both them and the tanker itself.

The LMXT will also have a number of U.S.-specific features, including unspecified defense capabilities. In addition, they will have open-architecture mission systems designed from the outset to work with various advanced networking and associated capabilities that the U.S. military, as a whole, is developing under the umbrella of an initiative known as Joint All-Domain Command and Control (JADC2). The Air Force is already exploring adding advanced communications relay nodes, as well as the ability to control semi-autonomous "loyal wingman" type drones for self-defense, to its existing tankers as part of the Advanced Battle Management System (ABMS) effort, which is the service's component of JADC2.

Still, the most significant component of the LMXT package may actually be the one that seems the most mundane, the added fuel capacity. The standard A330 MRTT, with its maximum fuel load of 111 tons, already carries more gas than the KC-46A. Lockheed Martin says adding 13 more tons on top of that will only allow the LMXT to refuel more aircraft per sortie, as well as give the tanker itself greater overall range and time on station.

However, the LMXT, like typical A330 MRTTs, lacks a main cargo deck with a large side-opening door for oversized loads. This is a feature on the Air Force's existing KC-135s, KC-10s, and KC-46As. All of these tankers have important, if largely underappreciated secondary cargo and passenger-carrying roles – the whole reason they carry the "KC" or "Tanker-Cargo" nomenclature.

The even greater emphasis on aerial refueling, rather than other roles, makes the LMXT distinct from previously rejected pitches to the Air Force involving the A330 MRTT. It's important to note that those proposals were also submitted to competitions that were mired in controversy, part of a long-range tanker acquisition saga that dated back to the early 2000s. This included one scandal the emerged between 2003 and 2004 that was so severe that it resulted in Darleen Druyun, who had served for a time as the Air Force's top acquisition official, being convicted on corruption charges and serving a nine-month prison sentence.

Lockheed Martin clearly hopes now that the LMXT's massive fuel load, along with its other features, will set it firmly apart from the KC-46A, which has struggled for years, due to a host of technical issues and quality control problems, to live up to the Air Force's expectations. The company's press release notably says that its A330 MRTT-based offering will have a "proven fly-by-wire boom" and "operational and combat proven advanced camera and vision system." These reflect major issues that the Air Force is dealing with on its Pegasuses that have limited their ability to serve in their primary role as tankers.

Many earlier tanker designs, such as the KC-135 and KC-10, have the boom operator physically lie at the rear of the aircraft. From there they steer the end of the boom into the receiving aircraft. The A330 MRTT puts the boom operator in the aircraft's main cabin, where they use a remote vision system, linked to an array of cameras at the back of the plane, to perform their task.

The KC-46A also has a hybrid 2D/3D remote vision system that has been riddled with issues and can be dangerous to use in some situations, as you can read about more here. Earlier this year, the Pentagon's Office of the Inspector General also released a report slamming the Air Force and Boeing over the design process behind the Pegasus' boom itself. Boeing is in the process of developing fixes for both the remote vision system and the boom, which are both years away from being integrated into the majority of KC-46As that the Air Force has in service now.

All told, the LMXT's aerial refueling optimized configuration could be an attractive selling point for the Air Force, given the difficulties it is still facing with regards to the KC-46A. At the same time, it's not clear whether the added fuel capacity would outweigh the aircraft's more limited payload-carrying capacity compared to the Pegasus.

It is also interesting to note that U.S. Transportation Command, in cooperation with the Air Force, has been exploring options for contractor-owned and/or operated tankers to support a variety of non-combat refueling requirements, which you can read more about here. Even if the Air Force decides against buying LMXTs as a bridge tanker for its own use, a simplified version of the plane without the networking and other advanced capabilities could offer an attractive option for contractors, including Lockheed Martin and Airbus themselves, looking to exclusively provide refueling services. Airbus is already part of a contractor aerial refueling consortium, AirTanker, which is under contract with the U.K. Royal Air Force.

Even if, as expected, Lockheed Martin and Boeing are the only two companies to submit bridge tanker proposals, the LMXT pitch makes clear that it will still be a very heated competition.