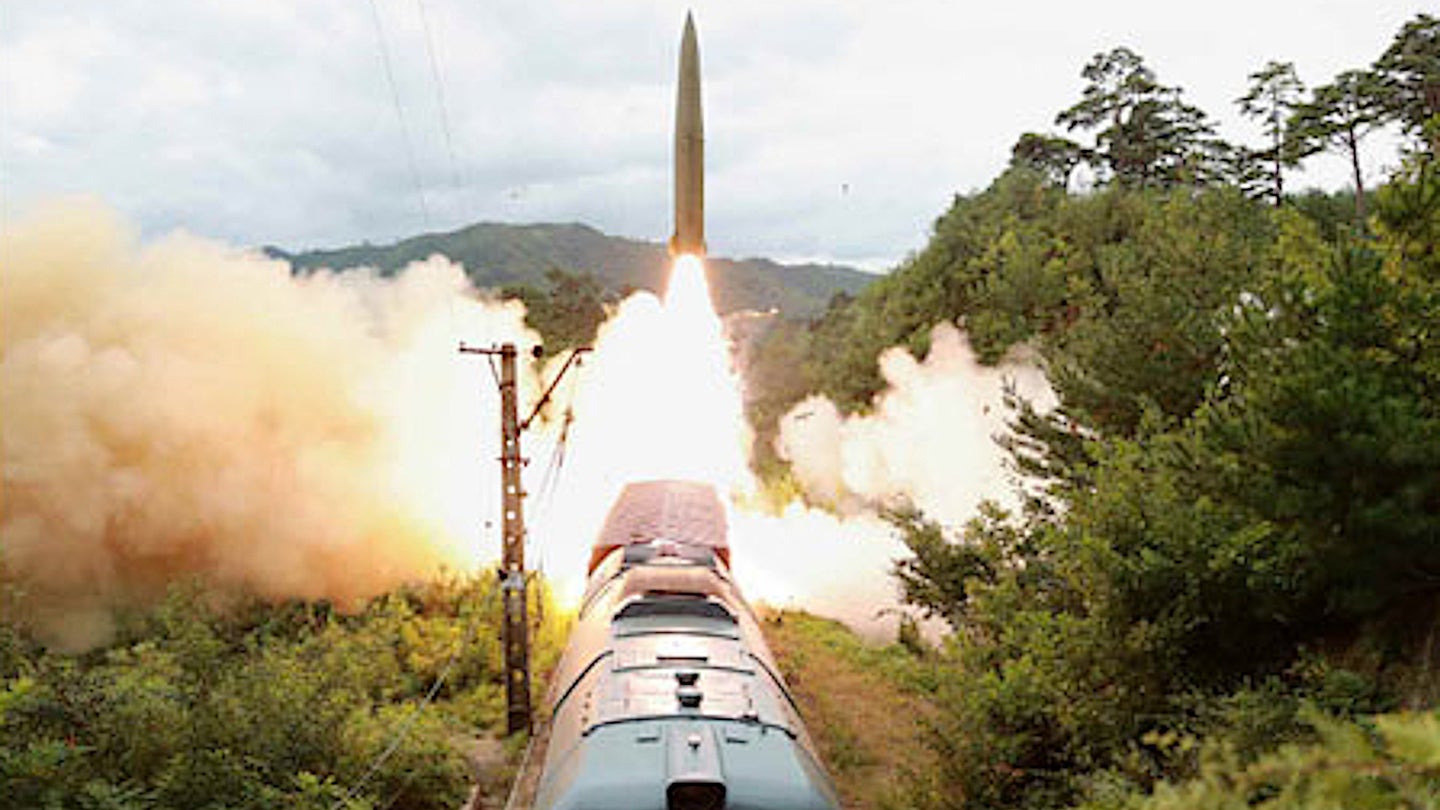 North Korea has revealed that a pair of ballistic missiles it test-fired earlier today were launched using a previously unknown railway-based system. A railcar-based missile launcher would offer a relatively cheap way for the North Koreans to field additional missiles in a way that would make them significantly less vulnerable to preemptive or counter-attacks.

The launches were carried out by the North Korean military's Railway Mobile Missile Regiment and this was the unit's first time demonstrating what was described only as a "railway mobile missile system," according to an official release from the country's state media. The statement also says the missiles flew approximately 800 kilometers, or nearly 500 miles, from their launch point before failing into the sea off the country's eastern coastline.

"The Eighth Congress of the Party [held in January 2021] organized the Railway Mobile Missile Regiment to increase the capability for dealing [an] intensive blow to the menacing forces in many places at the same time during [the] necessary military operation and powerfully improve the ability to more actively cope with all sorts of threats as part of [the] establishment of [a] new defense strategy," according to the state media release. "The drill was aimed at confirming the practicability of the railway mobile missile system deployed for the first time for action, evaluating without notice the combat preparedness of the new regiment and its ability to perform firepower mission and mastering the actual war procedures."

The launcher itself appears to be integrated inside a modified boxcar. The launcher arm, to which the missile is attached, moves into the launch position after the roof opens. Doors on the sides also open up to allow the blast from the missile's rocket motors to vent out the sides.

It is not entirely clear from the North Korean state media statement, or the pictures that were released along with it, what missile or missiles the railway mobile missile system is capable of firing. From what we can see in the photographs, the weapons launched in this particular test appear to be examples of a missile that the U.S. military refers to as the KN-23, which is, at least externally, very similar-looking to the Russian Iskander-M short-range ballistic missile. North Korea has also previously tested what appears to be a scaled-up KN-23-derivative.

It's interesting to note that South Korean and Japanese authorities have assessed that the KN-23, as well as this other larger missile, has only ever flown out to between 261 miles and 280 miles in past tests. The North Koreans themselves only claimed that examples of this enlarged KN-23 derivative traveled a distance of around 373 miles during test launches in March. The claimed range of whatever these rail-mobile missiles are is substantially greater, which could indicate that these other missiles have longer ranges than have previously been demonstrated.

"The railway mobile missile system is an effective counter striking means to deal a heavy blow at the threatening forces multiconcurrently with dispersive firing across the country," Marshal Pak Jong Chon, a member of the Presidium of the Political Bureau of the Central Committee of the Workers' Party of Korea and Secretary of the Party Central Committee, who oversaw the tests, said, according to the statement. "He stressed the need for the army and the fields concerned to steadily perfect the tactical plans to make the best use of this system in accordance with the geographical conditions and realities of the country."

The final remark about the "geographical conditions and realities of the country" is particularly notable here. North Korea has extensive rail lines and experience in building specialized trains. This includes a special armored train that is used by the country's leader Kim Jong Un and members of his inner circle.

A rail-mobile missile force would, as Marshal Pak reportedly observed, give the North Korean regime additional ways to rapidly disperse weapons of this kind and do so in a way that could be challenging for opponents to detect and monitor. Rail tunnels throughout North Korea would effectively provide hardened bunkers for these mobile missile launchers to hide in and would further frustrate attempts by adversaries to track their movements, let alone destroy them. They could be rolled out, fired, and then rolled back in the tunnel or moved to another tunnel very rapidly, making them extremely hard to destroy. They could also be moved around in disguised cars among other normal rail cars making them almost impossible to spot for daily operations.

North Korea is hardly the first country to see the potential value in a rail-mobile ballistic missile force for exactly these reasons. Russia, and the Soviet Union before it, previously deployed rail-mobile intercontinental ballistic missiles (ICBM), known as the RT-23 Molodets. The Kremlin had also previously planned to reintroduce this capability, with a system called Barguzin, before canceling that project to focus on the Avangard hypersonic missile.

During the Cold War, the United States also explored rail-mobile ICBMs on multiple occasions as one of many options to help reduce the vulnerability of its strategic missile forces.

It is possible that North Korea's new rail-mobile missile system might be adaptable to other weapons, as well, including other missiles that the country has in service or in development. Many of these weapons are believed to be capable of carrying nuclear warheads.

In addition, it is worth pointing out that this disclosure of yet another new North Korean missile system comes just days after it disclosed a test of a new ground-launched cruise missile. Earlier today, South Korea also released videos and details about the tests of four of its own new missiles, including a "high-power" ballistic missile and a supersonic cruise missile, underscoring a still-growing missile race that has emerged on the Korean Peninsula.

Regardless, North Korea's adoption of the rail-mobile missile system is hardly surprising and makes good sense for the country, especially given its existing infrastructure and technical expertise.