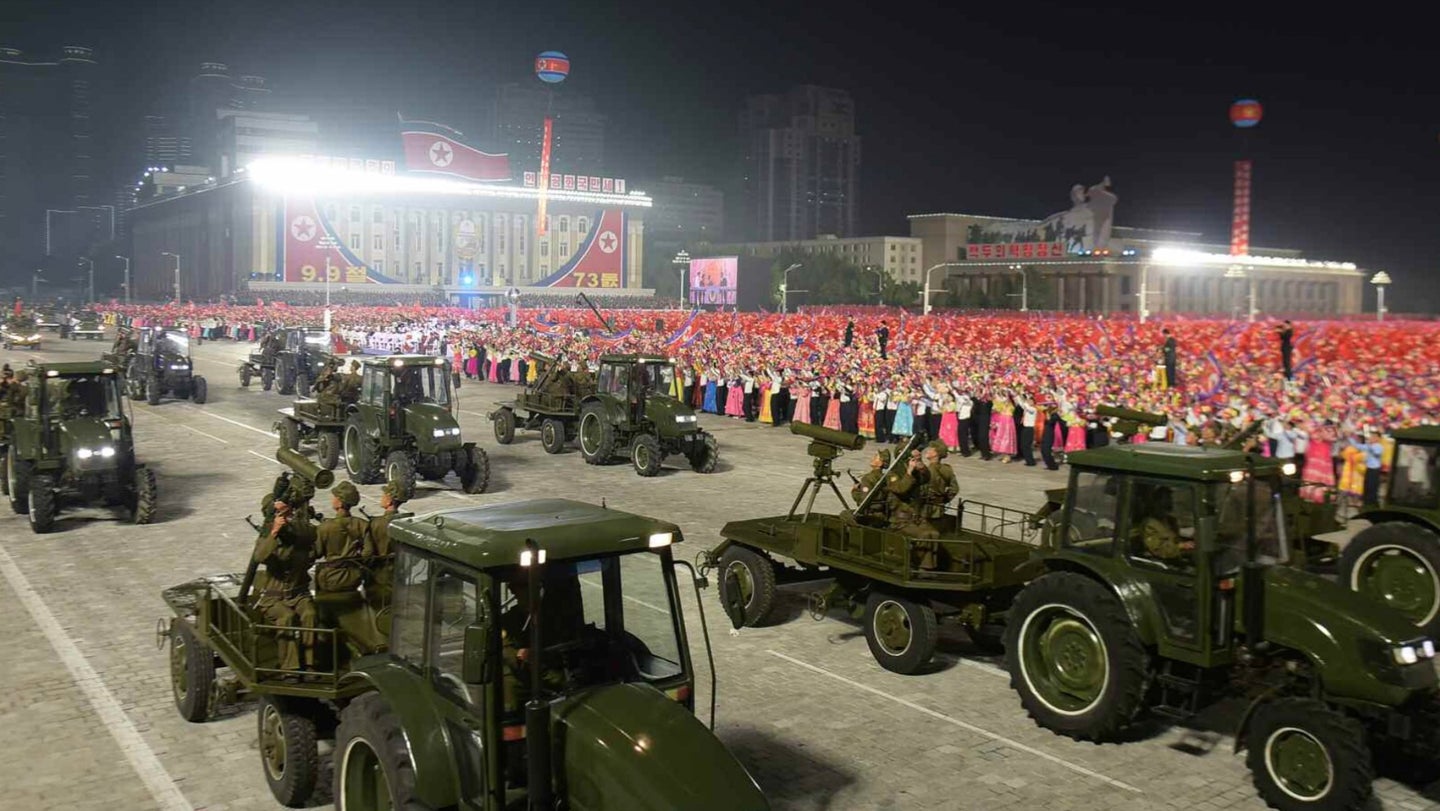 In a distinct change from North Korea’s familiar practice of unveiling new ballistic missiles and other high-profile equipment during large-scale military parades, the country’s capital early this morning hosted lines of marchers, including some in orange hazmat suits, as well as displays of troops with dogs and on horseback, while tractors towed rocket launchers and anti-armor weapons. The latter category included what has been identified as a previously unseen version of the Bulsae-3 anti-tank guided missile, perhaps the standout item in what was, altogether, a truly unusual spectacle, even by North Korean standards.

The parade, which was overseen by leader Kim Jong-un, looking notably slimmer than in the past, was held in Pyongyang’s Kim Il-sung Square to celebrate the 73rd anniversary of the Democratic People’s Republic of Korea (DPRK). It was the first parade of its kind on such a scale since President Joe Biden took office in the United States and, all told, represented a significant change in style from similar events in recent years.

While the Korean Central News Agency (KCNA) reported that fighter jets flew in formation over the parade, the actual items visible on the ground were altogether more prosaic, including horse patrols, canine units, and even fire trucks. Not only were the famous ballistic missiles absent, but there was apparently no heavy military equipment of any kind, such as tanks, tracked self-propelled artillery, or mechanized air defense weapons, on display this time around.

Perhaps the most potent firepower was the multiple rocket launchers, anti-tank missiles, and man-portable air defense systems (MANPADS) towed by agricultural tractors, also undoubtedly among the more unusual items on display. While we have, in the past, seen rocket launchers paraded on tractor-towed trailers, the appearance of the apparent Bulsae-3 anti-tank guided missile (ATGM) on a tripod launcher, which was in turn mounted on a trailer, was apparently new.

The latest in the Bulsae (Phoenix) series of anti-tank missiles, the Bulsae-3 is widely considered to be a clone of the Russian 9M133 Kornet, which has already appeared in the hands of non-state actors, and the North Korean weapon similarly features laser guidance. When it was shown to Kim Jong-un in early 2016, the North Korean leader boasted that the Bulsae-3 could turn even the best-protected enemy main battle tanks into “boiled pumpkin.”

Stijn Mitzer and Joost Oliemans, independent experts on the North Korean military, who have written extensively on the subject, told The War Zone that combining the Bulsae-3 with the repurposed agricultural tractors was likely done expressly for the parade. As such it’s unlikely that the North Korean military would actually plan to bring anti-tank weapons onto the battlefield in this way, although the country’s armed forces certainly do make use of tractors and civilian trucks as prime movers for rocket launchers and other equipment, especially to boost the firepower of its extensive reserve forces.

Whatever the practicality, the weapons themselves — and their operators — represent an important part of North Korea’s defenses that are often overlooked in favor of new intercontinental ballistic missile designs, for example, and hardware from other high-profile, advanced military programs. The previous major parade, in January, had grabbed attention by including the first appearance of a new submarine-launched ballistic missile (SLBM).

Today’s parade instead highlighted the contribution of the Worker-Peasant Red Guard to the country’s armed forces, explaining the more paramilitary feel of the whole event. The Worker-Peasant Red Guard was established as a reserve formation during the Korean War that was waged from 1950 to 1953 and today numbers around 5.7 million, according to the Korean Central News Agency.

The last time we have seen the Worker-Peasant Red Guard take part in a parade of this kind was back in 2013.

While the Guard does have plenty of other weapons at its disposal, its soldiers are typically equipped with weapons passed down from frontline units and only a limited number of advanced equipment is available to them. In fact, some of the Guard’s equipment dates back to the era of its establishment, including Korean War-era T-34 tanks and SU-100 self-propelled artillery. Infantry weapons can be of an even older vintage, among them Mosin-Nagant rifles and PPSh-41 sub-machine guns dating back to World War II.

With that in mind, the apparent issuing of new Bulsae-3 ATGMs to the Guard is especially significant.

“The Worker-Peasant Red Guard makes up much of the DPRK population and is as such organized by region and even through specific occupations,” Mitzer and Oliemans explain. “It is also responsible for manning many of the DPRK’s ubiquitous AAA [anti-aircraft artillery] sites, manned by locals and workers.”

In fact, while the prodigious size of the Worker-Peasant Red Guard singles it out, it’s just one of several militia organizations in the country, which also include the 600,000-strong Reserve Military Training Unit, which is made up of former conscripts and can be mobilized more rapidly than the Guard in case of conflict, as well as the Red Youth Guard, which comprises child soldiers aged between 14 and 16.

“The parade seems to be strictly designed as a domestic festival aimed at promoting national unity and solidarity of the regime,” Yang Moo-jin, a professor at the University of North Korean Studies in Seoul, told the Guardian newspaper, reflecting on the different mood of the event.

Rather than nuclear-delivery systems, the emphasis was on paramilitary units as well as public security forces, while the ranks of marchers in hazmat suits, complete with respirators and hoods, and described as “emergency anti-epidemic” fighters by state media, were intended to show the country’s response to the COVID-19 pandemic. For some time now, Pyongyang, for its part, has made outlandish claims that it has had zero COVID cases, despite much evidence to the contrary.

The focus on paramilitary and public security forces also provides a means for the North Korean leadership to demonstrate its ability to crack down on any potential internal dissent at a time in which the country’s economy is under extreme pressure. The strict lockdown enforced to tackle the pandemic has combined with ongoing sanctions and severe flooding, leading to official warnings of food shortages.

As well as the notable absence of nuclear delivery systems, today’s parade also did not feature a speech by Kim Jong-un, who in the past has used such opportunities to talk up North Korea’s military capabilities. Despite the sanctions, North Korea has been steadily building up its missile forces as well as its stockpile of fissile material required for nuclear warheads. Only recently, the International Atomic Energy Agency (IAEA) reported that North Korea appeared to have restarted its nuclear reactor at Yongbyon, which is believed to produce plutonium for nuclear weapons.

At the same time, it may be that Pyongyang has decided to take a less bellicose stance amid the continued diplomatic stalemate with the United States, although it has so far rejected American offers to resume discussions on the nuclear issue. Were talks to begin again, it is expected that Washington would offer to ease some of the sanctions in exchange for the DPRK making concessions on its nuclear weapons program.

There is also the possibility that the landmark of the 73rd anniversary of the DPRK’s founding was not deemed significant enough for a parade featuring new or existing strategic weapons systems. With the ruling Workers’ Party celebrating its anniversary in early October, this could provide another opportunity to show off other, and potentially new, military hardware. The corresponding event in October last year saw North Korea unveil a huge new road-mobile ICBM, which you can read more about here.

It might not be too long, therefore, until North Korea stages another military parade that again showcases its military might and its growing nuclear capability. In the meantime, today’s smaller parade throws light on the lesser-known, but still important reserve forces available to Pyongyang, as well as revealing a renewed focus on internal security and the country’s response to COVID-19 and other domestic challenges.