It's very rare we get a peek inside a jet that belonged to Saudi royalty and this one can be yours! 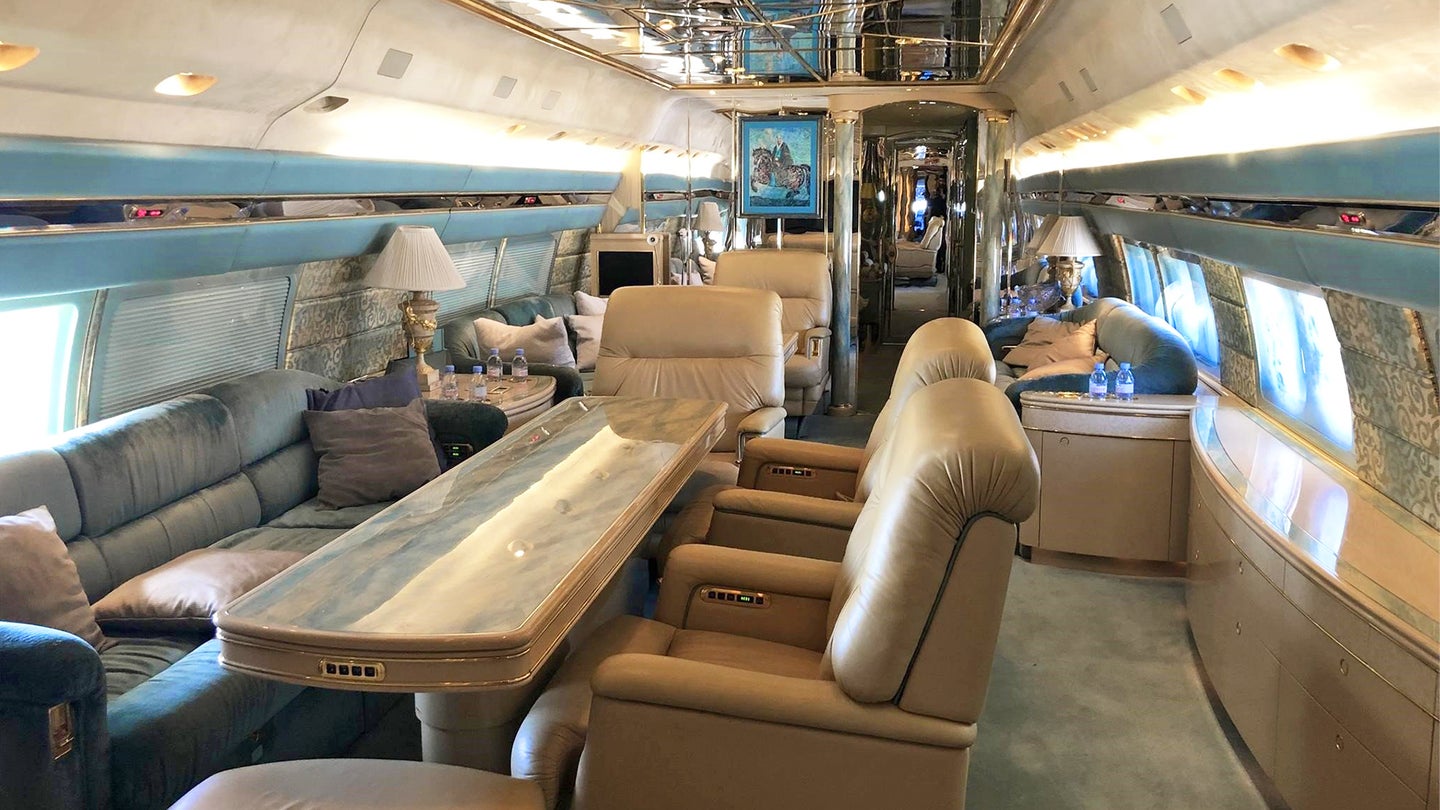 Saying something is "fit for royalty" is an often abused talking point for those selling luxury goods, but for one 737 Boeing Business Jet (BBJ) that is currently up for sale, such a claim is totally true. The aircraft up for grabs was built in 1999 and has been adorned in Saudi Arabian flag-bearing liveries for its entire life. However, it does not belong to the Kingdom's Royal Flight, strictly government-owned and very opulent aircraft, most of which are wide-body Boeing 747s and Airbus A340s, that serve the top rungs of the country's monarchy. But it's what's on the inside that really counts, and advertising images show that this 737 is about as luxurious as it can possibly get.

This BBJ may be 22 years old, but it only has 6,602 hours on it, which is a remarkably small amount of usage. The listing over at Controller.com states:

Aircraft was completed by Ozark Aircraft Systems in USA in 1999-2000. The interior layout can accommodate 25 VIP passengers and consists of an entrance/vestibule area, forward staff area, forward lounge, main lounge and master stateroom. There are 2 forward galleys, one forward lavatory and one aft lavatory.

While that is an adequate description of the aircraft's basic layout, it does not do its interior justice. The jet is elaborately adorned in what looks very much like Tiffany Blue with gold accents. Its lavatory bathroom looks more like what you would find in a five-star Parisian hotel than on an aircraft. In fact, its interior design looks remarkably timeless considering it is two decades old and likely cost its own fortune when originally installed.

The jet, which carries the Bermuda civil registration code VQ-BTA, has a large Saudi flag on the tail and Arabic nose art that reads: "Al-Mansour," which translates to "The Victorious." Not a humble statement for an aircraft that is anything but humble.

One unique element that has been displayed on this aircraft in various forms dating back many years is the seal of the Arab Gulf Program For United Nations Development Organizations (AGFUND).

Devex.com states the following about AGFUND:

The Arab Gulf Program for Development (AGFUND) is a regional organization based in Riyadh, Saudi Arabia. AGFUND was established in 1980 upon the initiative of His Royal Highness, Prince Talal Bin Abdul Aziz Al Saud with the support of leaders of the Gulf Cooperation Council Countries: United Arab Emirates, Kingdom of Bahrain, Kingdom of Saudi Arabia, State of Qatar, Sultanate of Oman and the State of Kuwait.

AGFUND works mainly in the field of development and growth at the international level through an effective partnership with the United Nations Organization, with regional and national development organizations, with public institutions, with the private sector, as well as with organizations of the civil society.

AGFUND believes in the sustainability of human development and poverty alleviation and struggles to enable vulnerable groups (women and children, people with special needs, displaced people and refugees etc..) to exercise their civil rights in their communities and lead a dignified social and economic existence with improved living conditions.

Through the implementation of its programs, Agfund provides support to needy groups to help facilitate their full access to basic and fundamental social requirements, such as education and health care, under the umbrella of fair national and international legislations towards the prevailing of security and peace. Agfund’s initiated effort to contribute without any discrimination to projects of human development, is done through the support of its Partners and is implemented, by the United Nations Development Organizations, by international and regional organizations, by governmental and NGO’s bodies all over the developing world.

Prince Talal Bin Abdul Aziz Al Saud was a relatively progressive figure when it comes to the royal elite in Saudi Arabia and remained outspoken on some of the Kingdom's most controversial issues throughout his life. He passed away in 2018 at 87 years old. One of his sons is now Chairman of AGFUND. So, with this in mind, as well as its prior Saudi Arabian registration HZ-TAA, it's possible that this was his personal aircraft, or at least it was related to him and his interests in some way.

As for what the aircraft is selling for, that isn't clear, as there is no listed price, but it certainly has a lot to offer despite its age. The newest BBJs based on the 737 Next Gen platform can run around $75M, but that is not with an interior like this, which can cost tens of millions of dollars by itself. So, buying a used, well maintained and equipped aircraft can save massive amounts of money compared to buying new. For instance, this 2001 model with an interior that is nowhere near as elaborate and more total time is selling for around $15M. That is about the same price as a new Citation Latitude midsize business jet, which is downright pedestrian compared to this BBJ.

So, if you are in the market for a flying yacht with very low usage and an interior that is truly fit for royalty, check out the original listing on Controller.com and give SM Executive Aviation a ring!