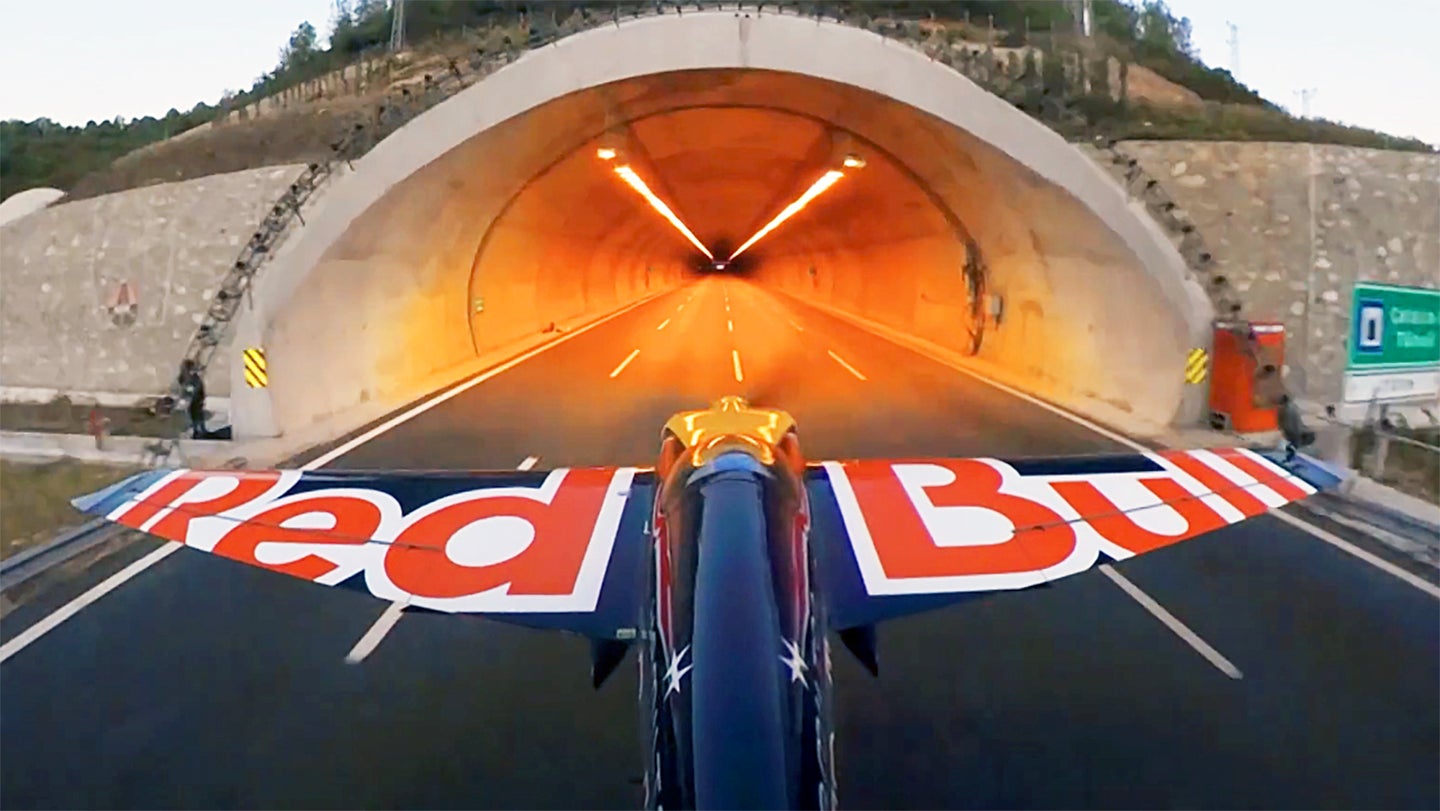 Really grabbing people's attention with an aerial stunt isn't as easy as it once was. A lot of what can be done has been done, regulations are tighter than ever surrounding the execution of such feats, and the constant "look at me" dwell of the internet makes doing something truly impressive without killing yourself really tough. Red Bull stunt pilot Dario Costa just overcame this reality and set four world records in the process. And oh was the record-setting flight intense.

The 7,400-foot route lasted just over 43 seconds and saw Costa flying his Zivko Edge 540 aerobatic monoplane flat-out through Istanbul's Catalca Tunnels. Check it out for yourself:

Flying through a tunnel clearly presents a load of potentially deadly issues, but flying through two tunnels consecutively really ups the danger. This is from Red Bull's website explaining exactly what we are seeing in the videos:

Surrounded by the concrete arc of the walls, Costa took off in the dim light of the first tunnel at 6:43am local time, with the early hour putting the sun at his back and offering optimal ambient conditions. Limited overhead clearance meant that he had to keep the aircraft on a flight path just above the asphalt while also managing a claustrophobic margin of only about four meters between each wingtip and the unforgiving walls.

Changes to airflow, combined with the highly sensitive steering of the aircraft, required reaction times of less than 250 milliseconds as Costa executed fine hand movements of mere millimetres throughout the flight. One of the most critical moments came when the plane flashed through the 360m gap between the tunnels, which exposed the lightweight aircraft to crosswinds as Costa prepared to thread it into the narrow opening of the second tunnel.

Costa described, “Everything seemed to be happening so fast, but when I got out of the first tunnel, the plane started to move to the right because of the crosswinds, and in my head, everything slowed down in that moment. I reacted and just focused on getting the plane back on the right path to enter the other tunnel. Then in my mind, everything sped up all over again.” As Costa continued, he was averaging 245km/h while also managing changes in the second tunnel’s incline and shape. When the race plane shot out of the other side, the Italian pulled it into a celebratory loop before landing.

In all, the Tunnel Pass project required a team of 40 people, specially developed training technology and more than a year of preparation.

“I’d never flown in a tunnel in my life – nobody had ever done it – so there was a big question mark in my head whether everything would go as we expected,” Costa says. “It was a big relief, of course, but big, big happiness was the main emotion. For me, it’s another dream come true.”

The civilian version of the C-130J is anything but civilized when pushed to its max by Lockheed’s top C-130 test pilot.