The mysterious soldier was one of a number of people who managed to get out even after the airport gates were supposed to be shut once and for all. 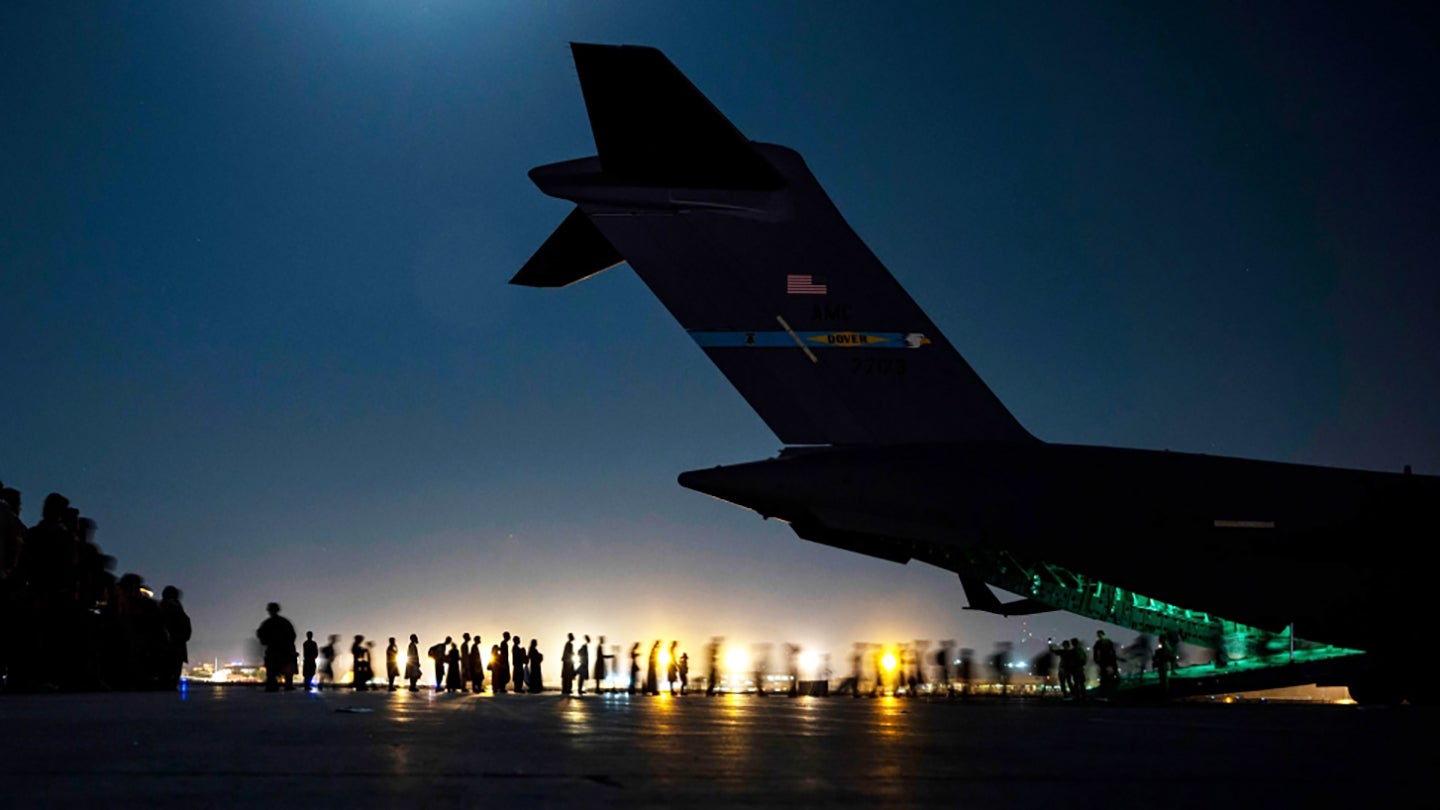 A lone Slovakian special operator was reportedly one of the very last foreign troops to leave Afghanistan via Hamid Karzai International Airport in Kabul earlier this week. This individual was among hundreds of people who made their way into the airport after U.S. Army Major General Chris Donahue, the top officer in charge on the ground at the time of the historic departure of the last American troops from the country, made the decision to continue allowing evacuees inside hours after the last open gates were supposed to be sealed.

Fox News' Jennifer Griffin posted on Twitter yesterday that Donahue, who is also the commander of the 82nd Airborne Division and was the last American service member to climb onboard a U.S. Air Force C-17A Globemaster III transport plane during the final withdrawal, was supposed to have closed all of the gates at a certain time. Instead, he had his troops continue letting people in for almost five more hours after that designated point.

Griffin says that Donahue "was supposed to close gates at midnight Aug 30," though it's unclear if this means 12:01 AM local time on Aug. 30 or Aug. 31. If the report is that the general kept the gates open for hours into the morning of the 31st, this would conflict with official statements from the Pentagon that the last U.S. military flight out of Afghanistan left at 11:59 PM on Aug. 30.

Regardless, more than 660 people made it into Hamid Karzai International Airport and were subsequently evacuated after Donahue decided to keep the gates open, according to Griffin. These individuals included the following:

"According to those involved in [the] operation, he [Donahue] was prepared to take any American who got to Gate up until [the] last C17," Griffin also wrote.

All of this is, in many ways, well in line with everything else The War Zone has learned so far about the final days of the evacuations leading up the ultimate withdrawal of the last American troops from Afghanistan this week, which ended nearly two decades of U.S. military presence in the country. Chaos, confusion, and bureaucratic hurdles in getting people to the airport and onto evacuation flights mixed together with ad hoc and sometimes semi-official efforts people to safety seem to have defined the two weeks following the fall of Kabul to the Taliban on Aug. 15. Official figures have since emerged that make clear that the U.S. government, for a host of reasons, fell well short of its own goals in terms of how many Americans, other foreigners, and at-risk afghans it had said it wanted to spirit out of the country.

In light of all of this, the mention of a single Slovakian special operator being among the very last people to get out on an American military cargo plane has created a certain amount of interest about exactly what this person was doing in Kabul at the very end. The War Zone has already reached out to the Slovakian Ministry of Defense with the hope of getting more specific details.

What we have been able to find out already is that a Slovakian "special unit" arrived at Hamid Karzai International Airport on Aug. 28 to execute a rescue mission to save 28 Afghans, according to a story from The Slovak Spectator. This group included six individuals with legal residence permits in Slovakia and members of their families.

Slovakia, which became an independent country in 1993 after the break up of Czechoslovakia, first deployed troops to the country in 2011. As a member of NATO since 2004, Slovakia's forces first served under the International Security Assistance Force (ISAF), which the North Atlantic military bloc led until 2014.

Whatever unit provided the personnel for this final evacuation mission, they had been called in to help with the rescue after other plans had fallen through. The Slovakian government had previously organized one evacuation flight of its own, but had attempted to coordinate with its Norwegian counterparts to get this second group of people out of the country.

Unfortunately, the Taliban had blocked these Afghans from entering the airport before Norway halted its evacuation effort on Aug. 26, citing the deteriorating security situation on the ground. That day, terrorists from Afghanistan's branch of ISIS launched a deadly attack outside of the airport in Kabul that killed 13 U.S. service members and at least 170 Afghans, and wounded many more.

The subsequent Slovakian rescue mission lasted approximately 80 hours and concluded on Monday. A Slovakian plane brought 14 of the 28 individuals back to that country. The remaining 14 Afghan evacuees rode on a U.S. military aircraft to an unspecified NATO country before then moving onward to Slovakia. Ramstein Air Base in Germany, Naval Air Station (NAS) Sigonella in Italy, and Naval Station Rota in Spain are among the locations that the United States continues to use as intermediate staging facilities for evacuees from Afghanistan before they are moved to more permanent resettlement locations.

“The people from the departments of defense, foreign affairs and interior who participated in this operation, worked for several days without a break, using all their strength,” Slovakian Prime Minister Eduard Heger said, according to the country's state-run TASR news outlet.

"Thank you for another successful evacuation from #Afghanistan," he also wrote on Twitter on Aug. 30. "Operation in extremely difficult conditions resulted into evacuation of 28 #people, who are now safe. Big thanks to the #USA for enormous help and support on the ground."

Though we can't say for certain, it would appear that one individual from this rescue mission stayed behind afterward, possibly to try to get others out of the country. We know that a network of ad hoc groups and individuals, including active and retired American special operators, operating with at least some degree of coordination with the U.S. government, were actively working to help individuals, especially at-risk Afghans, safely to the airport in Kabul over the past two weeks or so. The whole enterprise, largely coordinated using tools online, became dubbed a "Digital Dunkirk," in reference to the famous World War II evacuation operation the British conducted to get troops out of France in 1940.

Many of these rescue efforts were a product of personal connections between foreign troops who had served in Afghanistan since 2001 and Afghans they had worked with during those tours of duty. Though we can say one way or the other, it would not be surprising to learn that a Slovakian special operator would be in contact with Afghans they had worked with over the years and would have tried to stay in the country until the very end to help them escape. Afghans who worked with foreign governments, as well as members of former Afghan National Defense and Security Forces, are now at extreme risk of reprisals from the Taliban.

Other stories about individuals still trying to find ways to get at-risk Afghans out of the country continue to emerge, as well. A former British Army military policeman, Ben Slater, who runs a non-governmental organization called Nomad Concepts Group, was arrested and then released by the Taliban yesterday after trying to get a group of individuals out through an unspecified border station. He had previously said he had been able to get 67 other people safely out of Afghanistan.

Markwayne Mullin, a Republican Representative in Congress from Oklahoma, resurfaced earlier this week after effectively disappearing on his own unofficial rescue mission to the region. Mullin had reportedly been seeking to bring a large amount of cash into neighboring Tajikistan, where he planned to charter a helicopter to fly across the border into Afghanistan.

"I am heading home... Have we been helping get Americans out of Afghanistan, yes. Is the mission continuing, yes. Am I missing, no," he wrote in a post on Instagram on Wednesday. "Am I extremely disappointed in how we (United States) left Americans behind… that would be an understatement."

Of course, there could be other reasons why the Slovakian special operator was still in Kabul as the last American planes were preparing to leave this week. Hopefully, we will be able to get more details in the future about this particular story.

"The only true part is that our military evacuation plane with small SOF detachement were there on that day, being probably the last succesful evacuation effort by any other Allied nation excluding US. And, yes, we were succesfull to bring back 28 of our citizens and other affiliated personnel."

So it would seem that they do not agree with the report that the last U.S. flights out of Kabul included a single special operator from their forces.

We will continue to update this story as we learn more.

The War Zone also reached out to U.S. Central Command for additional clarification on this story. CENTCOM's public affairs office declined to comment at all and directed us to remarks that U.S. Marine Corps General Frank McKenzie, head of the command, had made about the evacuation operations and final withdrawal on Aug. 30.

McKenzie did not make any specific mention of this particular situation, though he did laud "the flexibility and the professionalism of the men and women of the U.S. military and our coalition partners who were able to rapidly combine efforts and evacuate so many under such difficult conditions."

The video provides an intimate and at times harrowing look into what service members went through as America stumbled out of its longest war.

The dogs were left at the airport when the U.S. military pulled out. Now, with the Taliban in control, their fate is anything but certain.