The video provides an intimate and at times harrowing look into what service members went through as America stumbled out of its longest war. 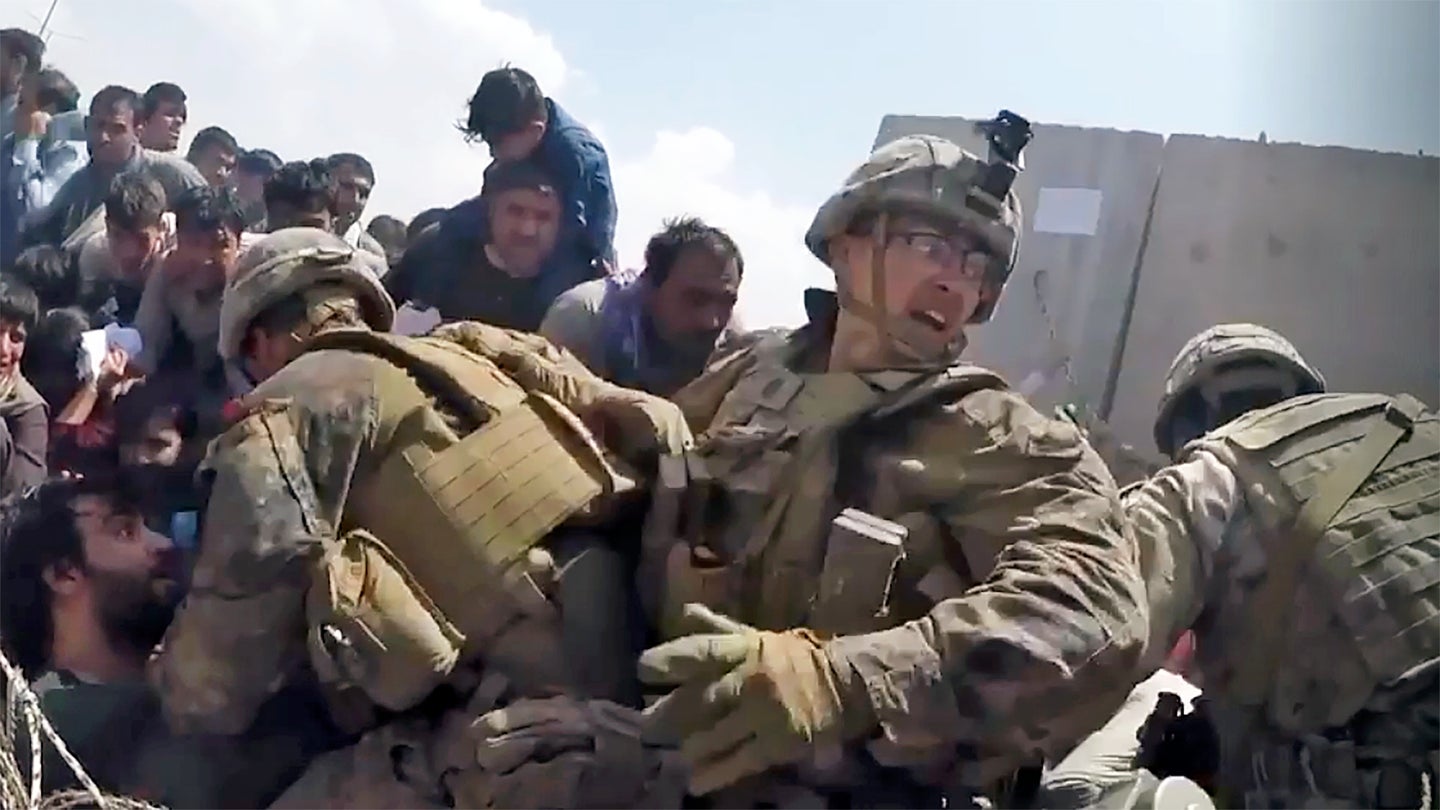 A member of the U.S. Marine Corps who took part in the recently concluded noncombatant evacuation operation in Afghanistan has posted an absolutely intense video montage on Instagram showing what the situation on the ground was really like in the past two weeks. It's an amazing first-hand perspective on what was an extremely challenging, often dangerous, and even deadly situation for American forces, as well as the throngs of people who made their way to Hamid Karzai International Airport in Kabul seeking to get out of the country.

The video starts with Marines boarding a U.S. Air Force C-17A Globemaster III cargo plane. This may have been shot in Kuwait, where Marines had been prepositioned for a potential contingency deployment prior to the fall of Kabul.

Subsequent clips then show Marines taking stock of the situation after arriving, securing abandoned weapons and even hotwiring a truck, as well as dealing with a sea of people outside the airport. Some of the footage shows weapons pointed at the crowd, as well as what appear to be tear gas canisters fired over them.

At one point, an individual who does not appear to be a U.S. military service person, who could possibly be one of the former Afghan National Defense and Security Forces personnel that assisted American troops in securing the airport or even a member of the Taliban, draws their pistol and shoots into the ground in front of the gathered civilians.

If the video does not show up below, you can find it on Instagram at this link.

UPDATE: @Mike_WAHLBURGER, the Marine who made the video, said in an Instagram post that he had to take it down, but said others to continue to use it. You can still see the video below as well as a screenshot of his post about taking it down:

Much of the rest of the video is a mix of Marines at rest, giving us a look at the spartan conditions they lived in while deployed to the airport in Kabul, as well as clips of them destroying a Lenco Bear Mine-Resistant Ambush-Protect (MRAP) armored truck and an SUV, among other things.

The video montage ends with a group of Afghans fist-bumping a Marine as they enter the airport and then a tribute to the Marines who were among the 13 U.S. service members who died in a deadly terrorist attack carried out by Afghanistan's branch of ISIS last week. The individual who posted the footage included the following message along with it, as well:

Id love for this to go viral for many reasons. I hope sharing this with the people on social media it brings light to what happened in Kabul through my point of view. This is all my footage and i also edited everything. I hope this answers questions but also provokes you to ask more. Share and repost this as much as possible.

To my brothers and sisters who were there i made this for you and your family. When you have the lack of ability to explain all that happened in those two weeks, show them this. Stand tall and wear the last two weeks on your chest. I havent found a way to explain it with anywords i know. These clips are not from one or two days, they are from two straight weeks of worsening conditions. This is barely even a glimpse. Many of us have felt a purpose greater than ourselves written in history for ever, the need to protect defend and fight for what we believe is right. Living in the shadows of the legends and giants who wore this uniform before us. To our knowledge ending a dark era for the United States military. Not knowing or caring about the circumstances. Only caring about what needs to be done and how we need to do it, putting ourselves last.

Many of us joined because we liked fighting and were good with adversity and conflict. Two weeks in Kabul at HKIA put all of that to the test. I cant say enough how proud i am of the Marines i serve with. Most of us old enough to have witnessed the day this war started, and many of us currently serving as teenagers. Odds were stacked against us, circumstances undeniably out of our control but we never let it deter our tenacious approach towards our mission at hand.

Adversity and challenges happened 24/7 many at the same time, and almost all had no predesignated plan. We did our absolute best and remained stoic through the sleepless nights and round the clock work with minimal food and water. Staying up for two or more days straight at a time grinding but remaining intensely vigilant. I serve with someones father/son/brother/sister/daughter/mother and i never take that lightly. I take it as a responsibility to never let those people down.

I dont have answers for a lot of stuff we had to see and deal with and i dont expect any. But i truly hope this sheds light. I assure you no matter how awful it may seem every single one of us wanted to be there, doing what we were doing, serving our nation that we love and owe. Never take for granted your freedom liberty and pursuit of happiness. To the Marines, sailors and soldiers injured and killed, you will live on as a legacy for decades to come. Never forgotten.

I tried to keep it as PG as possible with out jipping anyone of the experience. The familys and loved ones of the service members effected need our help, i searched for as many of their gofundme’s and charities as i can find they are posted at the end. I can always get you a link if you ask and if you have anymore details about them please feel free to let me know. #Kabul #1831b #RBNG #Afghanistan

As we at The War Zone have said before, very personal stories of heroism and just how things really were on the ground in Kabul over the past two weeks, and imagery to go with them, are only likely to keep coming out now. It has already been clear that the last two weeks of the U.S. military's nearly two-decades-long presence in Afghanistan were extremely intense all around, but this video really shows what our servicemen and women went through as America vacated its longest war.