The dogs were left at the airport when the U.S. military pulled out. Now, with the Taliban in control, their fate is anything but certain. 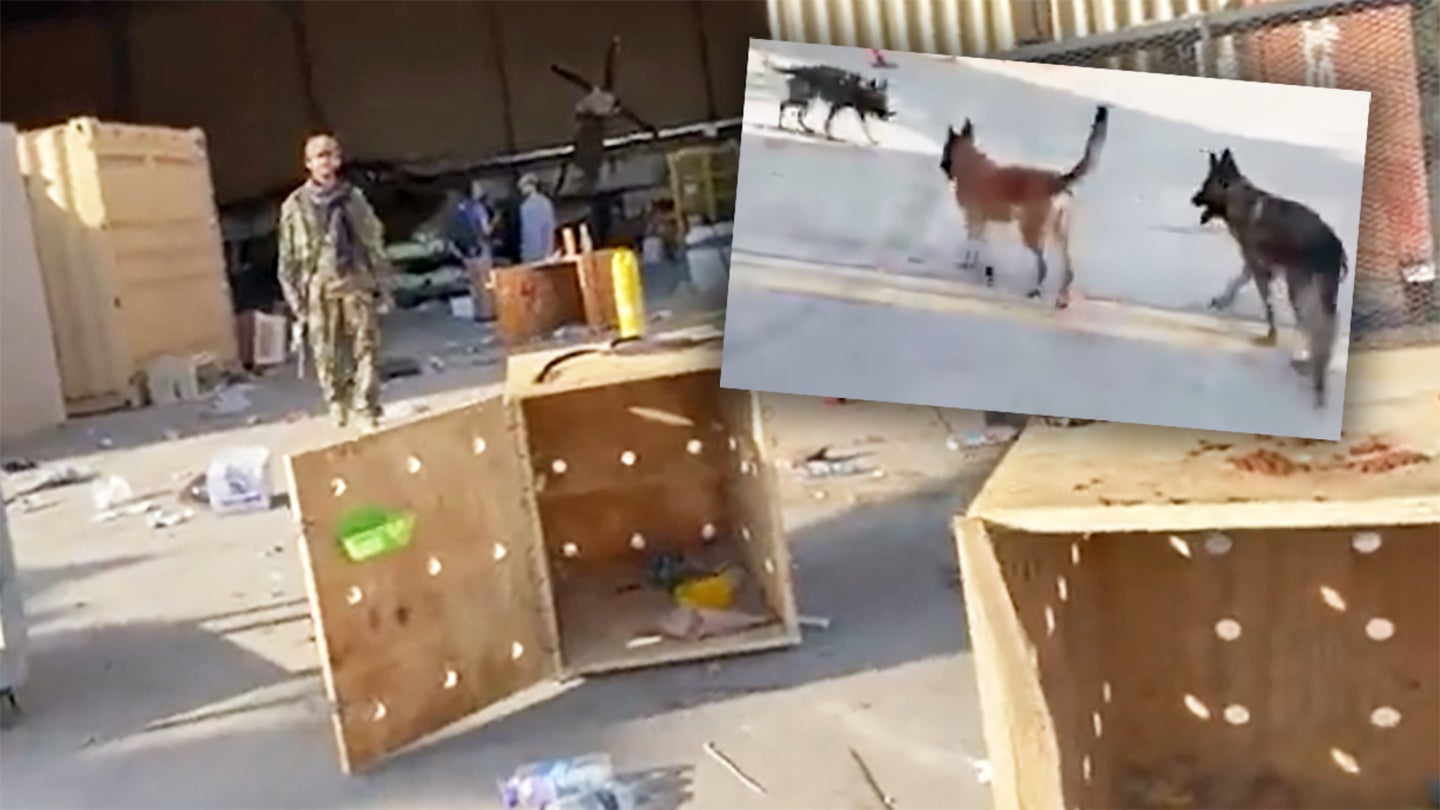 The saga of dozens of dogs that had been under the care of a non-profit organization in Afghanistan and that had still been at Hamid Karzai International Airport in the country's capital when the last American troops left earlier this week, continues to develop. It is now clear that this group of animals, which including trained working dogs, but none belonging to the U.S. government, was indeed released into the airport before the final U.S. military withdrawal. There is also a new report that the Taliban are in the process of rounding them up, with the hope of potentially putting some of them back to work. You can get fully up to speed on what was already known in The War Zone's initial reporting on this matter here.

Murad Gazdiev, a correspondent from Russian news outlet RT, reported on the issue of these dogs from the airport in Kabul earlier today. Gazdiev posted a video and pictures on Twitter of empty crates and carriers, among other things, but said the only dog he was able to find "was likely a stray."

"The Taliban’a [sic] commander of Kabul airport tells us US troops let their service dogs free as they evacuated," Gazdiev wrote in a Tweet. "The dogs are being rounded up, and the Taliban plans to, in an ironic twist, put them back into service for the Islamic Emirate. (No, they weren’t sentenced to death)."

Depending on the state of the working dogs, they could be valuable to the Taliban. It can cost anywhere between $50,000 and $150,000 to acquire and train military working dogs, depending on their intended roles, which can range from things like bomb detection to more general security work.

Beyond that, any dogs running around the airport would simply be a potential hazard to future flight operations there. Hungry and dehydrated dogs could easily be a danger to themselves and others, too. So, the Taliban certainly has a general incentive to round them up.

The video below reportedly shows dogs roaming around Hamid Karzai International Airport after the final American withdrawal earlier this week. However, it is difficult to say with absolute certainty that these were from the group that had been in crates and carriers and was subsequently released.

The exact fate of any of the dogs remains unclear, regardless of what the Taliban's plans might be for them. Kabul Small Animal Rescue (KSAR), a non-profit that runs a shelter outside of Kabul, previously said it had brought approximately 130 dogs to the airport in Kabul in the hopes of getting them evacuated. Around 50 of those dogs were "working dogs abandoned by contractors who supported the U.S. mission," KSAR founder Charlotte Maxwell-Jones told Stars and Stripes in a separate interview published today.

The U.S. military and the U.S. State Department have publicly denied leaving any of their working dogs behind in Afghanistan. It is also not clear when KSAR took responsibility for these other working dogs and whether the contractors in question may have been working for the now-defunct government of the Islamic Republic of Afghanistan at the time.

KSAR's Maxwell-Jones, along with members of the non-profit's staff and their families, more than 125 people in total, first arrived at Hamid Karzai International Airport last week. They brought the dogs, as well as dozens of cats, last week. She told Stars and Stripes that the Taliban had prevented anyone but her from entering the airport initially, but that she was able to get the dogs inside. Nine of her staff were also able to evacuate, but the rest remain in the country.

“All the service members on the ground were very nice,” Maxwell-Jones said of her experience after getting into the airport. “They helped take care of the animals; they took them out; they cuddled them. They were really, really great."

“But some of the higher-ups were like: ‘You’re using our resources," she continued. "We need to get people out. Do you care about animals more than people?’"

The exact factors that prevent KSAR's dogs from being loaded onto military evacuation flights remain murky. Though the U.S. military had repeatedly stressed that it would focus more on getting people rather than anything else out as the withdrawal deadline, Aug. 31, loomed closer, it is also known that Air Force cargo planes and charter flights were not always leaving Kabul fully loaded.

"I didn’t ask to move animals instead of people," Maxwell-Jones told Stars and Stripes. "I said let’s move them in addition."

A previous statement from SPCA International, one of the non-profit's partners, focused blame on a policy decision by the U.S. Centers for Disease Control and Prevention (CDC). As The War Zone has previously noted, there could well have been additional issues with the importation of any animals into the various foreign countries where American evacuation flights headed first after leaving Afghanistan.

Whatever the issue or issues on the U.S. military side might have been, it is also known that the U.S. government did not succeed in getting all of the individuals that it had wanted to out of Afghanistan before the last American troops left. This includes hundreds of American citizens.

Separately, Maxwell-Jones says that eight separate charter flights she had tried to book as part of an independent evacuation effort, dubbed Operation Hercules, to get the animals, and her staff and their families, out of Afghanistan had ended up getting canceled. This cost "her a substantial amount of money in nonrefundable deposits," according to Stars and Stripes. No details were provided as to why these cancellations occurred.

Maxwell-Jones is still in Afghanistan now and is continuing to working on getting KSAR's animals and its staff out of the country. She says she still hoping to get the dogs, including the working dogs, that had been at the airport back, though that seems increasingly unlikely. In the meantime, KSAR is also still looking to rescue any other dogs that may have been abandoned as part of the recently concluded evacuation efforts. Other animal welfare organizations are doing the same, as well.

We will still have to wait and see what the future holds for the dogs at the airport in Kabul, but at least now we know that they were not left to starve in their crates, or worse.