Security threats grow as the time left before the US military is scheduled to fully withdraw from Afghanistan is likely measured in hours, not days. 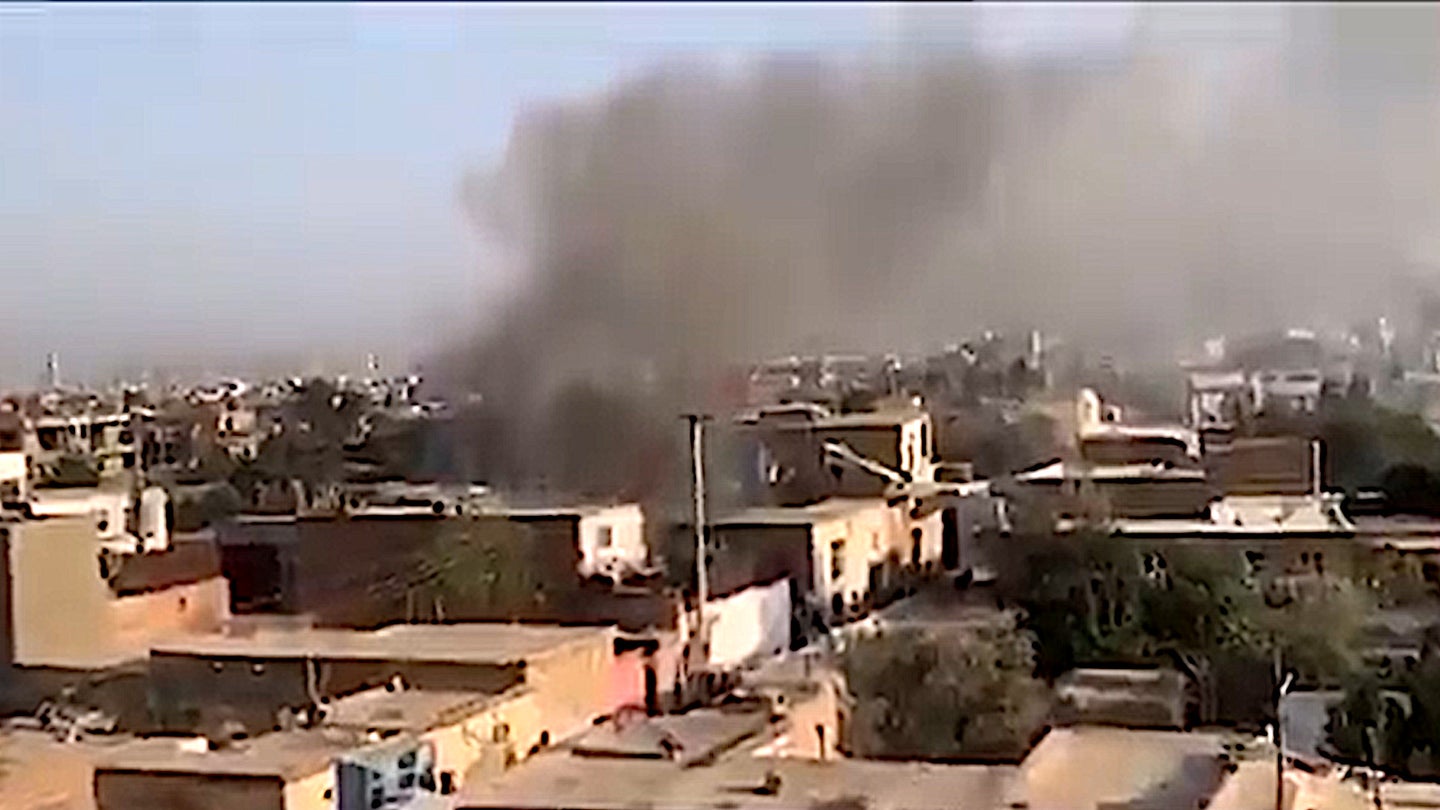 Details are still emerging, but the U.S. military has reportedly conducted a drone strike in Kabul targeting either a suspected car bomb or a vehicle full of multiple individual suicide bombers. This follows earlier reports that another explosion has rocked an area of the city in the general vicinity of Hamid Karzai International Airport. All of this comes a day after an official U.S. government security alert warned of a "specific, credible threat" targeting the airport, while President Joe Biden had separately said that another attack there was "highly likely in the next 24-36 hours."

Reuters reported that the "possible suicide car bomb" was targeted in the strike, but the Associated Press has described it as a vehicle with "multiple suicide bombers" inside.

"We are confident we hit the target we were aiming for. Initial reports indicate there were no civilian casualties caused by our airstrike," A U.S. official told Defense One. "Significant secondary explosions from the vehicle indicated the presence of a substantial amount of explosive material."

This operation comes on the heels of a U.S. drone strike targeting members of Afghanistan's branch of ISIS, also known as ISIS-Khorasan Province or ISIS-K, in Nangarhar Province. That was in direct retaliation for ISIS-K's deadly terrorist attack outside the airport, which involved a suicide bomber, last Thursday. That attack killed 13 U.S. service members and at least 170 Afghans, and wounded many more.

There had been earlier reports of an explosion in a residential area of Kabul in the general vicinity of the airport. U.S. Central Command had told NBC News that it was aware of the reports of an explosion in the city, but that it could not provide any additional details. There were multiple reports from eyewitnesses on the ground that a rocket might have caused the blast, which could actually have been a missile or other munition launched from a U.S. drone.

A U.S. drone strike targeting ISIS-K suicide attackers of any kind would align with growing warnings yesterday that another attack on Hamid Karzai International Airport could be imminent.

"Due to a specific, credible threat, all U.S. citizens in the vicinity of Kabul airport (HKIA), including the South (Airport Circle) gate, the new Ministry of the Interior, and the gate near the Panjshir Petrol station on the northwest side of the airport, should leave the airport area immediately," yesterday's security alert from the U.S. Embassy in Kabul, which is presently operating out of Hamid Karzai International Airport, had read.

"Our commanders informed me that an attack is highly likely in the next 24-36 hours," Biden had said in his statement. "I directed them to take every possible measure to prioritize force protection, and ensured that they have all the authorities, resources and plans to protect our men and women on the ground."

If these reports of a U.S. drone strike in Kabul are accurate, it only underscores how the security situation in the city remains fluid and will only get more tense as the U.S. military gets closer to closing out the current non-combatant evacuation operation in Kabul and affecting the final withdrawal of its remaining personnel. By Aug. 31, just two days away, the U.S. military is expected to have completely pulled out of Afghanistan after nearly two decades of operations. The last U.S. boots on the ground could very well come markedly sooner due to the degrading security situation paired with dwindling force protection capabilities at the airport.

Here is the official statement on the strike from CENTCOM:

We are confident we successfully hit the target. Significant secondary explosions from the vehicle indicated the presence of a substantial amount of explosive material.

We are assessing the possibilities of civilian casualties, though we have no indications at this time. We remain vigilant for potential future threats.”

Satellite imagery backs up the report from Al Jazeera's Charlotte Bellis below. Just a single C-17 left on the ramp and many helicopters are gone, as well. So this is in its endgame now. The almost continuous highway in the sky full of C-17s has turned into a trickle. KC-135 tankers and strike-capable assets remain visible on trackers. Some special operations aircraft appear to have repositioned into Islamabad, likely moving assets out of the country, such as Air Force HH-60G Pave Hawk rescue helicopters and possibly some (but not all) of the aircraft belonging to the U.S. Army's elite 160th Special Operations Aviation Regiment (SOAR) that have been operating in Kabul.

Multiple reports state that the Taliban are ready and waiting to take full control of the airport.

In the meantime, the Taliban have condemned the U.S. strike against ISIS-K. There is also chatter that the U.S. government may be looking to support the Taliban if they are willing to work with the United States on counter-terror efforts against this ISIS branch. That seems like hopeful thinking as the ties between the two groups and the political implications of the Taliban's stance towards ISIS-K is far more complex than senior administration officials are letting on.

France and Britain are wanting to set up an U.N.-backed 'safe zone' in Kabul for foreigners who want to leave the country to go to.

All this is happening while the U.S. mourns the loss of its 13 service members, who have been identified as follows:

Pretty much every other country has now left Kabul International, with the British pulling out in full by yesterday:

It appears one RAF C-17 crew made their departure a little bit more dramatic with a well-known soundtrack:

As for some sort of U.S. diplomatic presence in Kabul after the last boots have left Kabul Airport, at least in the near term, that doesn't look like a possibility:

New State Department statement that seems aimed at getting people out of Afghanistan once the U.S. is gone:

We are all committed to ensuring that our citizens, nationals and residents, employees, Afghans who have worked with us and those who are at risk can continue to travel freely to destinations outside Afghanistan.  We have received assurances from the Taliban that all foreign nationals and any Afghan citizen with travel authorization from our countries will be allowed to proceed in a safe and orderly manner to points of departure and travel outside the country.  We will continue issuing travel documentation to designated Afghans, and we have the clear expectation of and commitment from the Taliban that they can travel to our respective countries.  We note the public statements of the Taliban confirming this understanding.

Reports claim that the U.S. did not hit a vehicle-borne IED today in Kabul, but instead a family. Considering the nature of the claim, we are likely to hear something from the DoD on this soon:

There is also some debate over if an AGM-114R9X was used in the first retaliatory strike against ISIS-K. The Wall Street Journal claims its unnamed sources say it was, but we see no indication of that in the images from the scene:

A report now says the U.S. was given the option by the Taliban to secure Kabul, which would have taken a massive amount of troops and would have been impossible on the deadline set, let alone tactically insane. Still, some are pushing this one

supposed choice as some grand misstep:

Meanwhile, flag-draped coffins holding the remains of America's heroes who were killed in the blast at Kabul International have returned to the United States aboard a C-17. President Biden, the First Lady, Defense Secretary Lloyd Austin, and others were at Dover AFB to receive them:

Finally, this is the state of Afghan Media:

Almost as if on cue, artillery rockets were fired at Kabul International. They definitely got the attention of some in the city. The Pentagon now says C-RAM intercepted them before impacting the airfield.

As for exactly what the U.S. hit in its drone strike in Kabul, after claims that innocent civilians were killed instead of ISIS-K suicide bombers, the Pentagon now states the following:

We are aware of reports of civilian casualties following our strike on a vehicle in Kabul today.

We are still assessing the results of this strike, which we know disrupted an imminent ISIS-K threat to the airport. We know that there were substantial and powerful subsequent explosions resulting from the destruction of the vehicle, indicating a large amount of explosive material inside that may have caused additional casualties. It is unclear what may have happened, and we are investigating further.

We would be deeply saddened by any potential loss of innocent life.