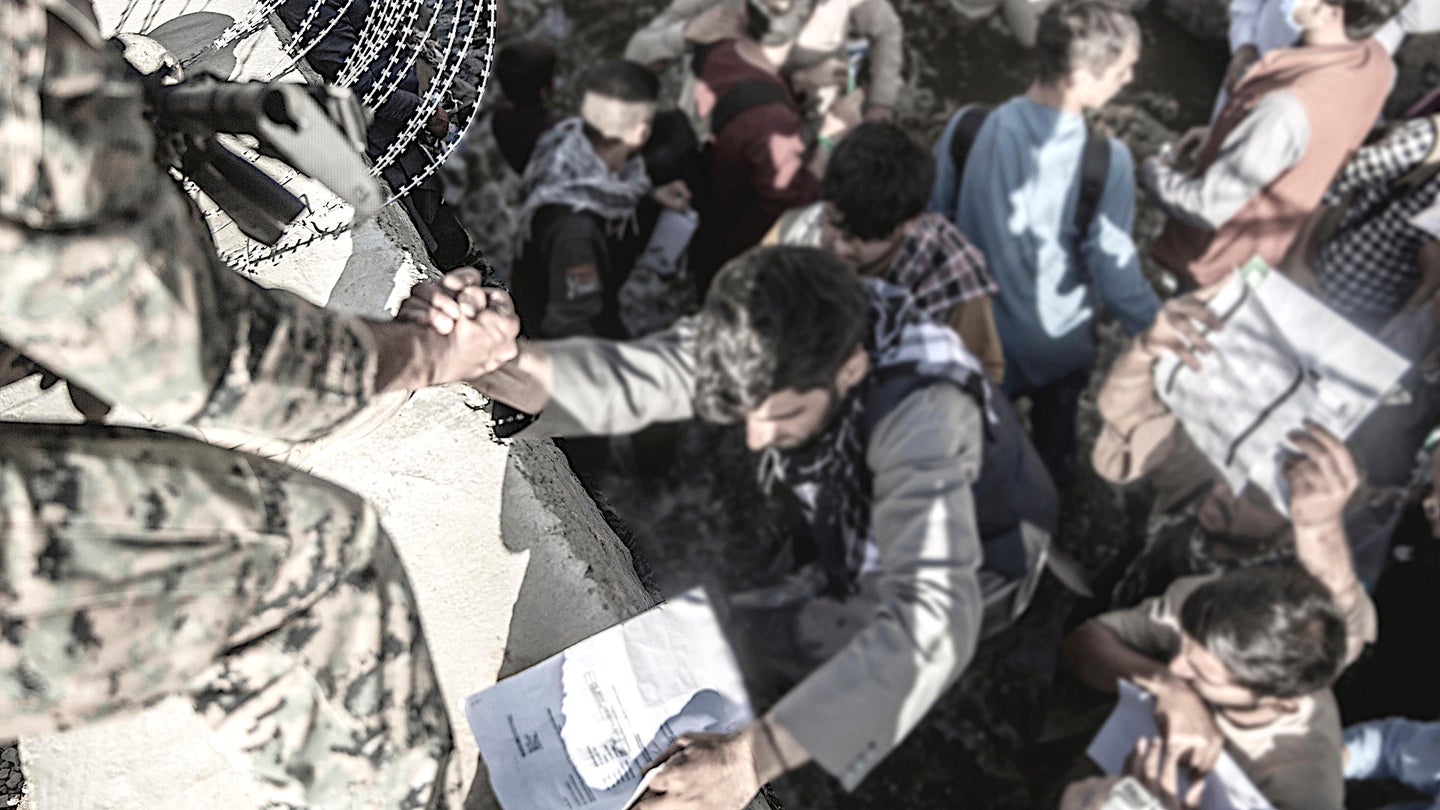 Earlier this week, the collection of current and former members of U.S. special operations forces units, intelligence operatives, aid workers, and others were able to sneak hundreds of at-risk Afghans into the safety of the American-controlled portion of Hamid Karzai International Airport. This involved helping small groups navigate past Taliban checkpoints to a secret entrance into the airport, and included the use of codewords and other signals. One of the individuals who led the effort, nicknamed the Pineapple Express after the group's own nickname, Task Force Pineapple, said that the entire affair often felt like something straight out of a Jason Bourne movie.

was first to report on the Pineapple Express mission, which took place between Wednesday and Thursday. Individuals from Task Force Pineapple were still shepherding Afghans into the airport when the fatal terrorist attack occurred yesterday evening, which you can read more about here, and some of the evacuees were wounded as a result. Members of this ad hoc group of special operators and others said they were able to help as many 500 Afghans get to safety in this one particular operation and that they had rescued more than 130 others since Aug. 16, the day after the Taliban marched into Kabul.

"Dozens of high-risk individuals, families with small children, orphans, and pregnant women, were secretly moved through the streets of Kabul throughout the night and up to just seconds before ISIS detonated a bomb into the huddled mass of Afghans seeking safety and freedom," retired U.S. Army Lieutenant Colonel Scott Mann, a member of Task Force Pineapple and a retired Green Beret commander, told ABC News. "This Herculean effort couldn't have been done without the unofficial heroes inside the airfield who defied their orders to not help beyond the airport perimeter, by wading into sewage canals and pulling in these targeted people who were flashing pineapples on their phones."

The U.S. military has conducted a number of rescue operations in Kabul officially, including in coordination with allies and partners, in the past two weeks. British, French, German, and other foreign forces had carried out similar activities, as well.

However, informal groups and other kinds of networks that have sprung up have also become a critical means of getting individuals to safety. Task Force Pineapple is one of these entities, but there are known to be others, including one named Task Force Dunkirk, a reference to the legendary evacuation of the remnants of the British Expeditionary Force from France in 1940 during World War II. Individuals and groups outside of Afghanistan, using various online tools, have also been helping to coordinate these kinds of evacuations as part of what some have dubbed a "Digital Dunkirk."

Retired U.S. Army Captain Zac Lois, another former Green Beret working with Task Force Pineapple, "said he modeled his slow and steady system of maneuvering the Afghan families in the darkness after Harriet Tubman’s Underground Railroad for American slave escapees," according to ABC News. This particular network, which has reportedly been just using an encrypted chat group to coordinate its activities, uses Underground Railroad terminology, with "conductors" helping individuals move through a chain of safe locations in Kabul to get to the airport. Lois is described as the railroad's "engineer."

Those helping to guide Afghan "passengers," who include former government security forces personnel, intelligence assets, interpreters, and their families, among others, to safety are also referred to as "shepherds" in today's story. The evacuees are ultimately told to link up with individuals at the airport who are identified by some sort of code, such as a specific addition to their clothing. It's not clear what, if any, weapons the volunteers on the ground might carry, but pictures Lois provided to ABC News

The exact extent to which Task Force Pineapple, and other groups like it, have been coordinating directly with the U.S. government is unclear, but formalized links do exist. "The group I was attached to as a volunteer was listed in the command center as a supporting element. We were part of the team," Tim Kennedy, an active-duty Army special operator who has been working with another group wrote on Twitter today, while also offering additional details you can read below.

Regardless, until this week, with the U.S. government's withdrawal deadline, which is still set for Aug. 31, drawing ever closer, Task Force Pineapple has only ever moved small groups of people in a single night. Even the details about what Task Force Pineapple has been doing sound absolutely harrowing. ABC News' piece includes the following description of the mission that started it all:

It all began with trying to save one Afghan Commando, whose special immigrant visa was never finalized.

During an intense night last week involving coordination between Mann and another Green Beret, an intelligence officer, former aid workers and a staffer for Florida Republican and Green Beret officer Rep. Mike Waltz, the ad hoc team enlisted the aid of a sleepless U.S. Embassy officer inside the airport. He helped Marines at a gate to identify the former Afghan commando, who was caught in the throngs of civilians outside the airport and who said he saw two civilians knocked to the ground and killed.

"Two people died next to me -- 1 foot away," he told ABC News from outside the airport that night, as he tried for hours to reach an entry control point manned by U.S. Marines a short distance away.

With Taliban fighters mixing into the crowd of thousands and firing their AK-47s above the masses, the former elite commando was finally pulled into the U.S. security perimeter, where he shouted the password "Pineapple!" to American troops at the checkpoint. The password has since changed, the sources said.

Ramping up operations earlier this week only increased the risks. Mann described what happened between Wednesday night and Thursday morning as being "full of dramatic scenes rivaling a 'Jason Bourne' thriller unfolding every 10 minutes," according to ABC News.

"The small groups of Afghans repeatedly encountered Taliban foot soldiers who they said beat them but never checked identity papers that might have revealed them as operators who spent two decades killing Taliban leadership," the ABC News story explained. "All carried U.S. visas, pending visa applications or new applications prepared by members of Task Force Pineapple."

There have been reports for days now about the difficulties Afghans and even American nationals have had in getting through Taliban checkpoints to get to the airport. Politico reported just yesterday that U.S. officials had made the extremely controversial decision to pass information about U.S. citizens and Afghans to the Taliban to try to ensure they could get to the airport. This, of course, could only have increased the already substantial risks faced by all of these individuals, especially Afghans who are already in danger of reprisals due to their past work with the United States or affiliations with the now-defunct government of the Islamic Republic of Afghanistan.

"Many of the Afghans arrived near Abbey Gate [at Hamid Karzai International Airport] and waded through a sewage-choked canal toward a U.S. soldier wearing red sunglasses to identify himself," the ABC News piece continued. "They waved their phones with the pineapples and were scooped up and brought inside the wire to safety. Others were brought in by an Army Ranger wearing a modified American flag patch with the [U.S. Army's 75th] Ranger Regiment emblem."

At one point during the mission, a number of Task Force Pineapple teams on the ground lost signal to their cellphones and were unable to communicate with the rest of the group. This was reportedly the result of active electronic warfare jamming on the part of U.S. forces at the airport who were trying to prevent cellphones from being used to remotely trigger improvised explosive devices. There were other, separate reports earlier this week that jammers might have been used for this purpose amid escalating concerns that a terrorist attack could be imminent. This was all, of course, before yesterday's events outside of the airport in Kabul, which started with an individual detonating a suicide vest they were wearing.

"The whole night was a roller-coaster ride. People were so terrified in that chaotic environment," Jason Redman, a retired U.S. SEAL, author, and member of Task Force Pineapple, told ABC News. "These people were so exhausted, I kept trying to put myself in their shoes."

"I have been involved in some of the most incredible missions and operations that a special forces guy could be a part of, and I have never been a part of anything more incredible than this," retired Army Major Jim Gant, another former Green Beret who been working with Task Force Pineapple, also said. "The bravery and courage and commitment of my brothers and sisters in the Pineapple community was greater than the U.S. commitment on the battlefield."

Gant is a near-legendary, if controversial former Green Beret who became known as the "Lawrence of Afghanistan" before being forced into retirement in 2014 after an affair with a Washington Post reporter.

It's not clear whether Task Force Pineapple, or any of the other similar groups, is still operating in Kabul or, if they are, how long they will continue to do so. The U.S. military is only days away from the date of its expected total withdrawal from Afghanistan and there are already indications that official evacuation operations are starting to wind down. This has included the start of controlled detonations at the airport to destroy equipment that won't be withdrawn at the end. There were also reports today that the Central Intelligence Agency had closed down one of, if not the last of its major operational sites in Afghanistan.

Other countries have been announcing the end of their own evacuation operations for days now ahead of the American deadline. There are also reports today that the Taliban have been exerting more authority over the civilian side of Hamid Karzai International Airport, though American officials have denied that U.S. troops have already pulled out completely.

While the U.S. government has insisted that evacuation operations will continue right up until the last moment, the total capacity to get people out of the country can only shrink in the coming days. With that, the ability of groups like Task Force Pineapple to just find planes to get people onto will also decrease.

"I just want to get my people out," Gant told ABC News, referring to Afghans who worked with Americans over the past nearly two decades of American operations in Afghanistan, as well as their families.

Hopefully, more of them will be able to make it to safety one way or another, but, unfortunately, the window to get out via the U.S. evacuation effort at Hamid Karzai International Airport is rapidly closing. Regardless, of what happens going forward, we have only beginning to hear the incredible stories of how many of them got out and the heroes who made it happen.