The Pentagon has announced that, starting in the 24 to 48 hours, it will deploy approximately 3,000 troops to Hamid Karzai International Airport in Afghanistan's capital Kabul to help American diplomatic personnel from the U.S. Embassy and others evacuate the country. This comes as President Joe Biden's Administration continues to push ahead with a near-total withdrawal of American forces from the country, though this new development means that there will soon be more U.S. military personnel there than there were officially in January, before the withdrawal began.

Amid the drawdowns, the Taliban have made substantial gains, capturing 12 provincial capitals just in recent weeks, reportedly leading to new U.S. government assessments that the group could surround Kabul in the next 30 days and potentially have complete control of it within three months.

Pentagon Press Secretary John Kirby announced the impending deployments at a briefing today. While he did not identify the specific units that would be heading to Afghanistan, he did say that two infantry battalions from the U.S. Marine Corps and another from the U.S. Army would make up the bulk of the total force. They will join 650 personnel, primarily special operations forces, presently forward-deployed at Hamid Karzai International Airport. In January, the Pentagon said that there were only 2,500 American troops in the country, in total.

It's not clear how these incoming troops will be accommodated within the confines of the airport, which is also still set to soon host a Turkish security force. In July, the U.S. military notably withdrew entirely under controversial circumstances from Bagram Airfield just outside of Kabul, which had served as a major hub for American and coalition operations in the region for nearly two decades.

All of these troops will be under the command of U.S. Navy Rear Admiral Peter Vasely, a SEAL who is presently in charge of U.S. Forces-Afghanistan (Forward). Earlier this year, as part of the ongoing withdrawal effort, the Pentagon shifted responsibility for day-to-day operations in Afghanistan directly to U.S. Marine Corps General Frank McKenzie, the head of U.S. Central Command (CENTCOM), and moved the U.S. Forces-Afghanistan headquarters to Qatar. That country is also now hosting the main office responsible for U.S. military cooperation with Afghanistan's security forces and an Over-the-Horizon Counterterrorism Headquarters involved in coordinating ongoing operational support for those forces, to include airstrikes launched from the Persian Gulf region.

Additional personnel will also move into the region to provide supplemental assistance and otherwise be on call should the security situation in Afghanistan deteriorate further. Around 1,000 troops will specifically go to Qatar to aid in the processing of Afghans who have worked with the U.S. government and are now eligible for Special Immigrant Visas (SIV) that would allow them to seek refuge in the United States. Getting those individuals, as well as Americans, out of Afghanistan could require a major airlift, as well.

An Army infantry brigade combat team from Fort Bragg in North Carolina, almost certainly the brigade from the 82nd Airborne Division presently assigned to the Immediate Response Force (IRF), will also move somewhere in the region to be in a position to respond if needed. The IRF is an extremely high-readiness contingency response force that is on alert for deployment anywhere in the world, utilizing Air Force airlifters, at all times.

Press Secretary Kirby has insisted that these deployments reflect a "narrowly-defined mission" and no constitute an official non-combatant evacuation operation, or NEO. That is the formal term the U.S. military uses for missions to pull out American nationals from countries experiencing some sort of disruption in their basic functioning, to include significant civil unrest or a major natural disaster.

The U.S. State Department has separately insisted that the Embassy in Kabul will remain open, though it has already been operating with significantly reduced staff for months. Two official U.S. government travel alerts this week have already urged U.S. citizens to leave the country as soon as possible. The New York Times

has also reported that American officials have been trying to secure guarantees from the Taliban that the group will leave the Embassy alone if it takes control of the Afghan capital, which seems like a preposterous proposition.

Despite the official pronouncements, the reality certainly seems to be that something very akin to an NEO is now underway, driven by the reality of the Taliban's rapid gains. Just today, the group claimed the capture of Herat, Ghazni, and Kandahar, the provincial capitals of the provinces of the same names, as well as Badghis province's capital Qala-I-Naw, further solidifying its control over the country's western, southern and northern regions.

"I'd say is that no potential outcome has to be inevitable, including the fall of Kabul, which everybody seems to be reporting about," Kirby had said yesterday, amid reports that U.S. officials were fearing that the Taliban could have Kabul isolated in 30 days and that they could very well have it captured within 90 days. "It doesn't have to be that way."

Inevitable or not, and despite pleas from the U.S. government and others for the group to seek a negotiated end to the conflict, the Taliban certainly seems to believe that a victory through force may be finally within reach. Other countries in the region, notably China, appear to be increasingly preparing for the government in Kabul to fall. For his part, Press Secretary Kirby declined to speculate on what kinds of direct support, such as airstrikes, the U.S. military might provide for its Afghan counterparts after Aug. 31, when its current authority to continue to those types of missions runs out.

With the security situation in Afghanistan so fluid now, and the Taliban only continuing to gain ground, these new U.S. troop deployments could turn into an official NEO soon. If that comes to pass, it could very well spell the complete end of the U.S. military's presence in the country after almost 20 years, and a potentially very violent one at that.

The mention of 1-194th Field Artillery is curious given that Press Secretary John Kirby had described the deploying units all as infantry battalions. This battalion is equipped, in part, with the Centurion Counter-Rocket, Artillery, Mortar (C-RAM) system, which, as its name suggests, is designed primarily. to knock down incoming artillery rockets and shells, as well as mortar rounds, You can read more about this system here.

It is unclear if 1-194th Field Artillery is heading to Afghanistan with its C-RAMs, which could be very valuable for protecting forces at Hamid Karzai International Airport from incoming Taliban fire. That group has used rockets and other artillery to attack the airport in the past. It is also possible given Kirby's description of the battalions, though perhaps less likely, that this unit is being sent to operate as an infantry force, rather than as a C-RAM unit, something that has occurred with artillery elements in the past.

What's perhaps more notable, however, is that elements of 1-194th Field Artillery just returned home in July from various locations in the U.S. Central Command area of responsibility. If even a portion of this battalion is now headed to Afghanistan, this would suggest the personnel involved may now be looking at effectively back-to-back deployments.

The report that the U.S. Army unit deploying to Afghanistan was 1st Battalion, 194th Field Artillery Regiment was in error. The Washington Post's Dan Lamothe has put out a correction to note that the unit in question is actually the 1st Battalion, 194th Armor Regiment, part of the Minnesota Army National Guard.

You can read more about the still-evolving security situation in Afghanistan in The War Zone's continuing coverage of the conflict here. 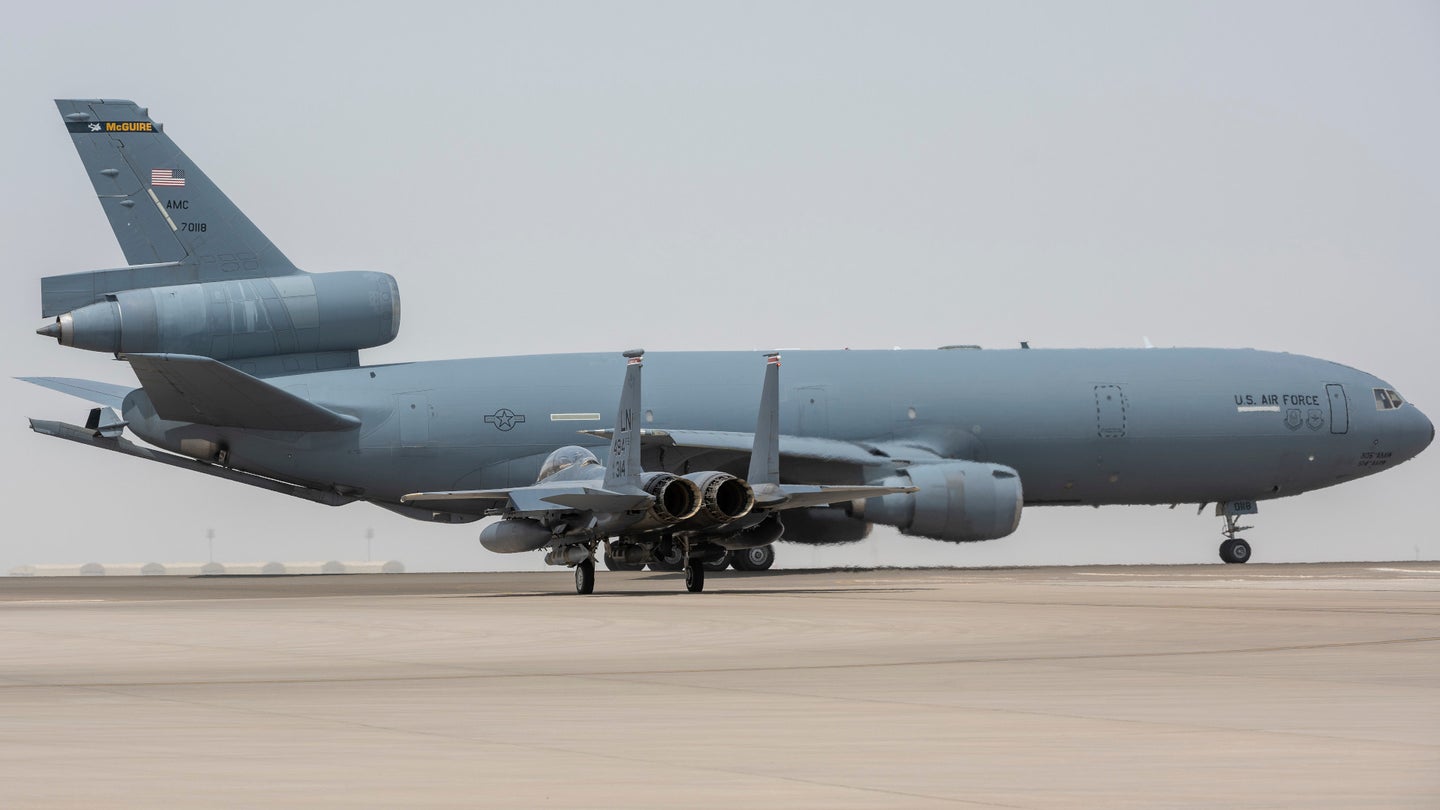 What It Takes For U.S. Jets To Keep Fighting In Afghanistan From “Over The Horizon”

Recent information provided by the Air Force underscores the hurdles the service faces in conducting airstrikes in Afghanistan from the Persian Gulf. 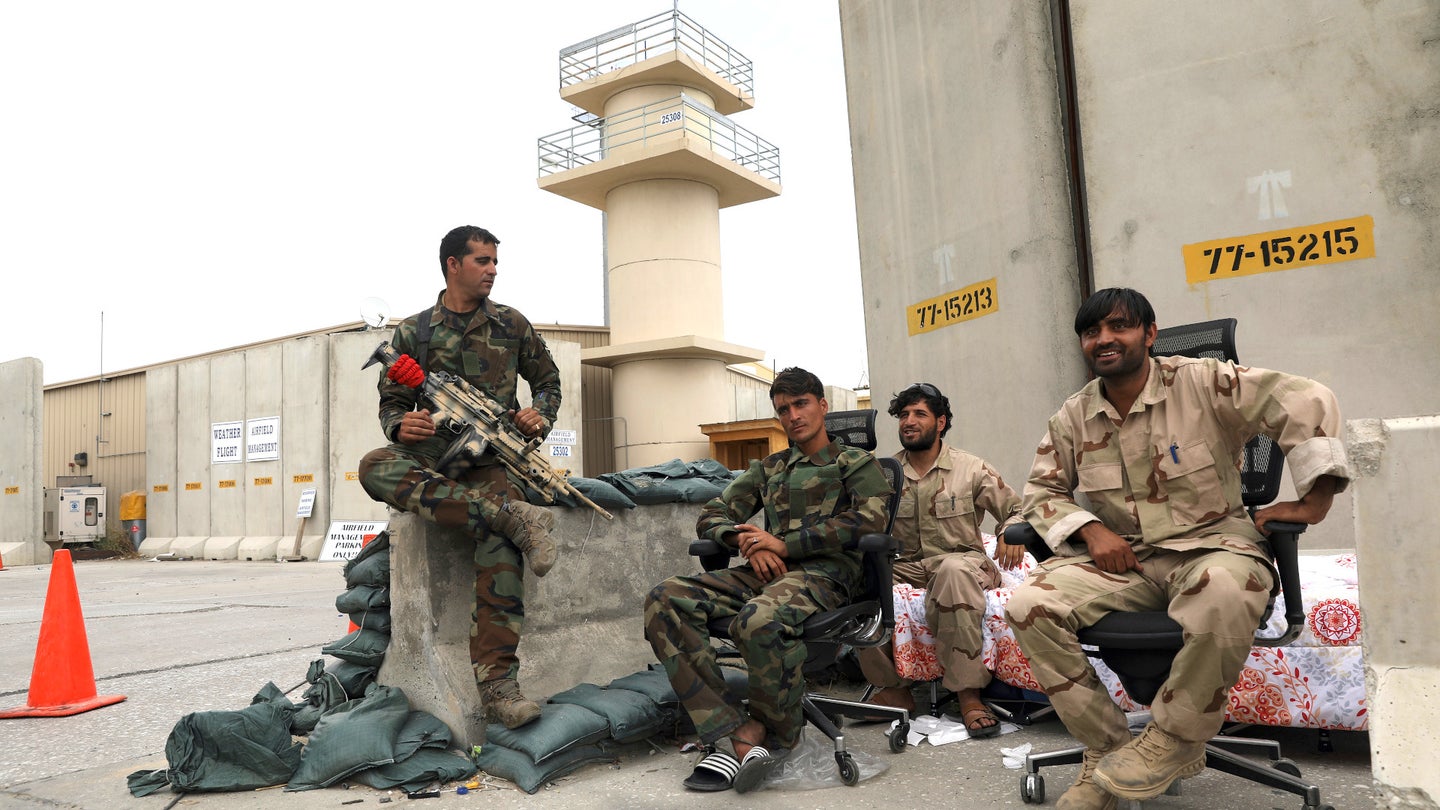 Nearly a decade after a satirical piece ran about ‘slipping out’ of Afghanistan, American troops unexpectedly cut the power at Bagram as they left. 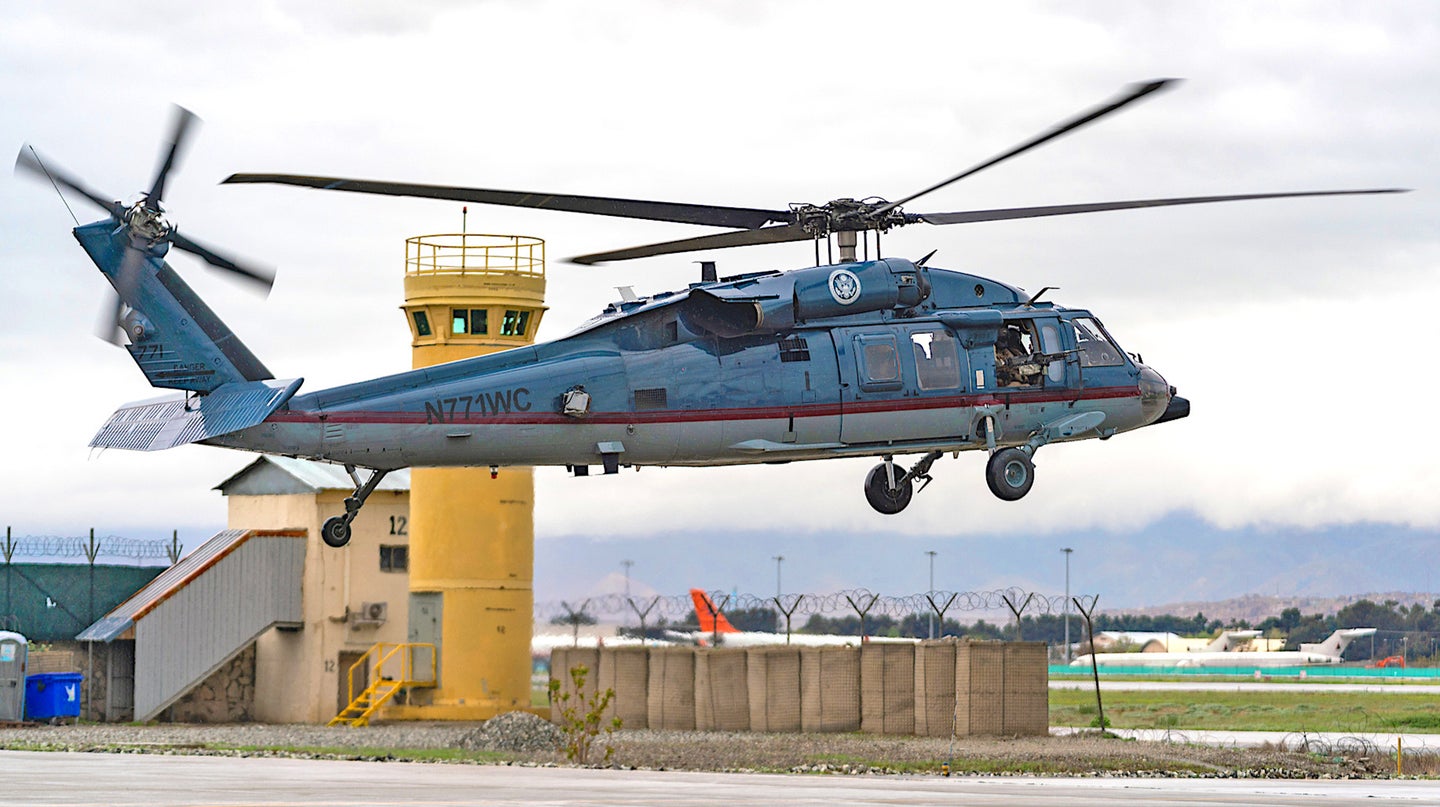 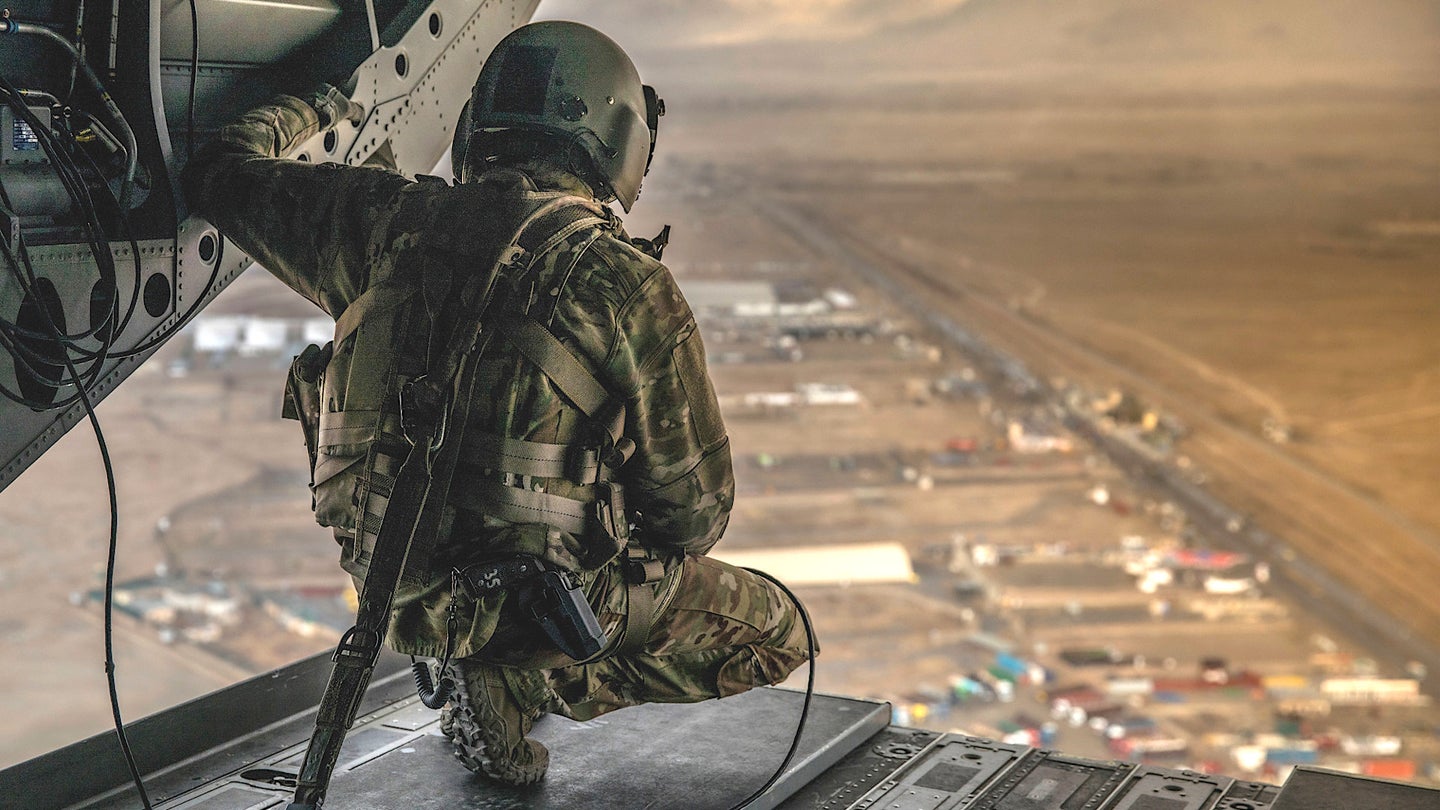 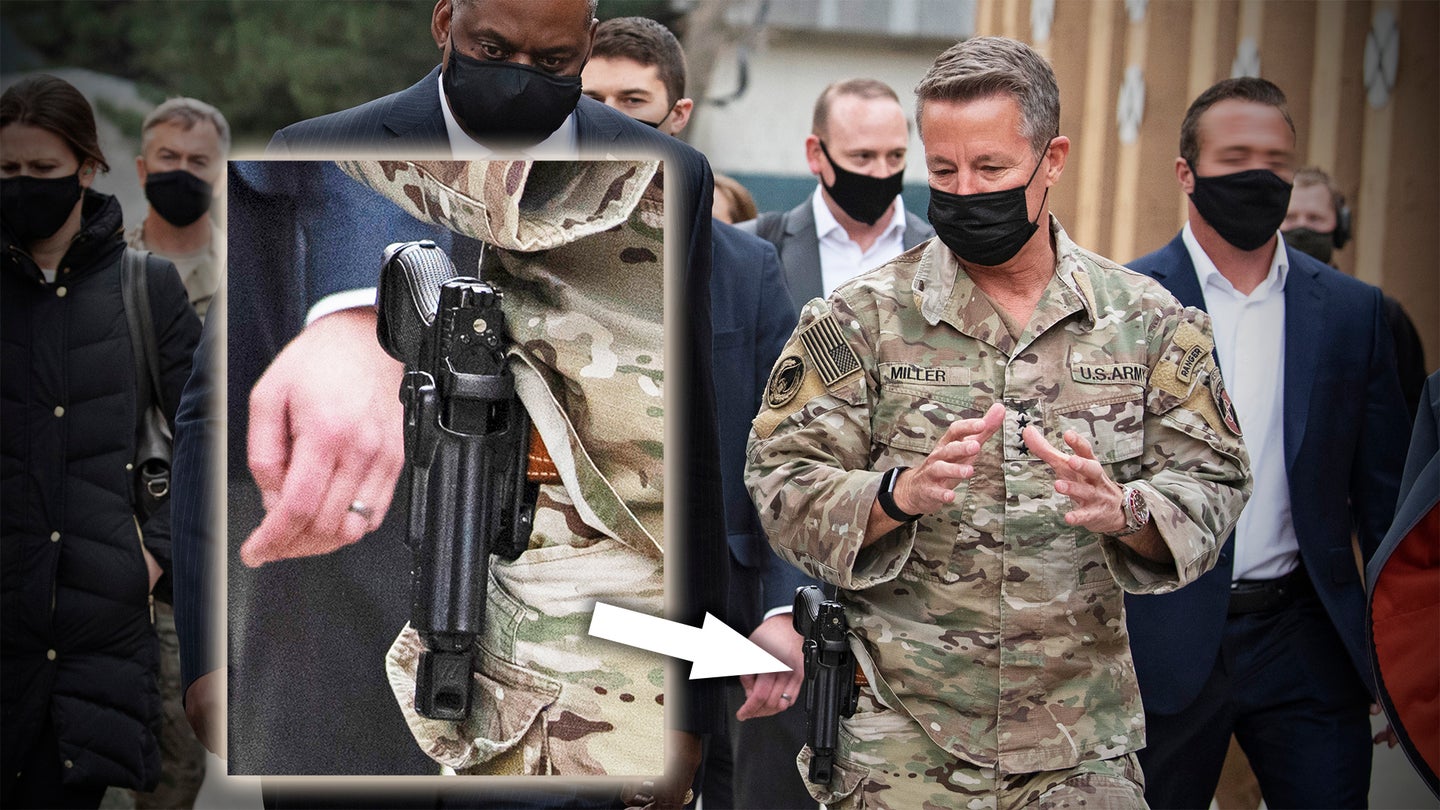