The Blue Angels’ pre-flight briefing is like nothing else. It is truly a rehearsal that happens entirely in the mind. 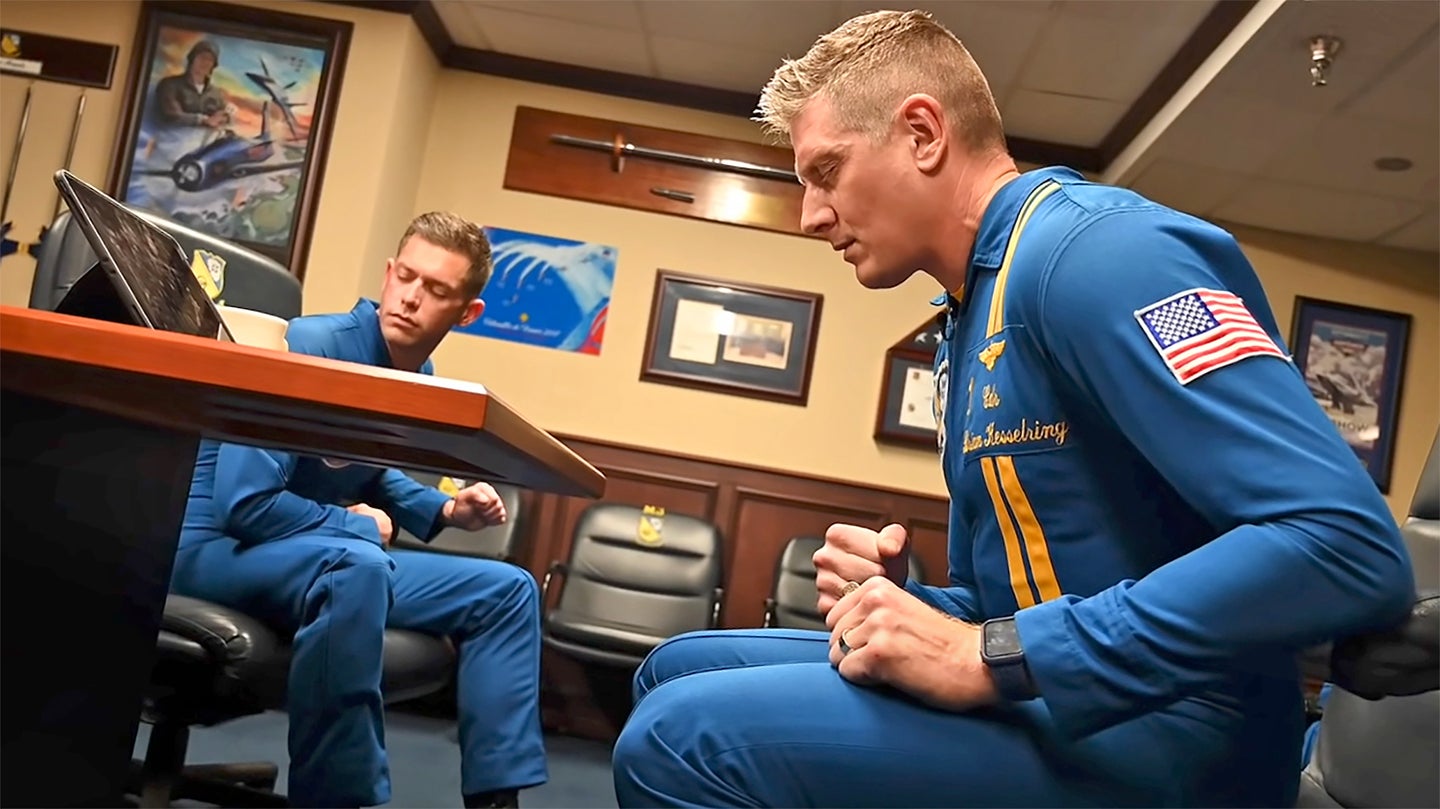 “It’s Friday, March 26th, 2021, over Naval Air Station Pensacola, Florida, where the winds are 220 at 3, 10 miles viz, few at 25,000 [feet],” begins Commander Brian Kesselring, the Flight Leader and Commanding Officer of the U.S. Navy flight demonstration squadron, the famed Blue Angels, as he commences a pre-mission briefing with his six-pilot team. Already, Kesselring’s voice is sharp, professional, to the point. As his briefing continues, his voice becomes more animated, going through his radio calls exactly as he would in the air as he immerses himself and his team in what has to be the ultimate preparation for the flight ahead. It is this almost meditative ritual that has helped keep the Blue Angels at the absolute pinnacle of their profession for so many years.

In a video recently posted on Twitter, we can experience edited portions of a rarely seen and very intimate Blue Angels pre-show briefing, ahead of a practice display at their home station. Kesselring sits with the blue-and-gold flight-suited team around a large table in the Ready Room at the team’s Pensacola headquarters on the beautiful coastline of the Florida Panhandle. What follows makes for remarkable viewing.

The pilots draw their respective show patterns on printed-out satellite images of the show venue as they mentally rehearse how Kesselring will lead them around the routine. Kesselring talks them through the moves, and each team member familiarizes themselves with his radio calls, often with their eyes closed, each with their hands simulating how they would be flying each maneuver.

Sometimes fast, sometimes slow, Kesselring moves through his various radio calls in a unique form of soothing pilot speak, much of which is difficult for an outsider to interpret, but the team members know exactly what his instructions mean as Kesselring carefully walks them through what he calls a planned “Delta High Show” practice. Delta formation is the team’s signature six-plane arrowhead formation.

The seemingly strange dialect spoken by the Blue Angels boss is not unique to Kesselring, it has been handed down throughout the decades and is learned by each new commanding officer that calls the elite squadron their own.

“A little pullllll” continues Kesselring — who took command of the team for the 2020 season — as he imagines going up and over the top of a loop. The camera cuts to his hand on his blue flight suit as he squeezes imaginary throttle inputs. “Easing more powerrr,” he says, as his hand mimics throttling back the twin General Electric F414 engines of the Super Hornet. The timing and calls endorse what the team knows is coming in the show. His voice is exactly as they will hear it on the radio once in the cockpit. They are all in the moment, getting themselves “in the bubble.”

The Blue Angels upgraded from the F/A-18C to the Super Hornet for the 2021 season, and Kesselring oversaw the transition to the new jets. The team had flown the F/A-18A/B/C/D Legacy Hornet since 1986 when it transitioned from the A-4F Skyhawk. The move to the Super Hornet was planned for the 2021 season, and so maintaining continuity in the pilot cadre was an obvious consideration.

“A little ease... comes the pull.” The knuckles on Kesselring’s right hand are white as he clenches his fist and makes imaginary control stick inputs. The Blue Angels’ Super Hornets have received a number of modifications for their new role including the fitting of a spring to the control stick which means the pilot must constantly exert pressure on it, even in level flight. This modification was carried over from the “legacy” Hornet and it assists with smooth formation flying. The team doesn't wear G-suits because the inflating of the bladders could throw off their finely tuned, always under pressure, stick inputs.

“Smoke up push, gooooo diamond stinger.” The cadence in his voice, the way he speaks is all about giving voice commands that help the team to make their respective moves at exactly the right time. They know what’s coming, they know what he will say, but this is all about the exact timing.

The Blue Angels pilots have flown the team’s show routine many times, they know it inside out and the show is highly scripted. Kesselring’s careful briefing is designed to get them all in the zone, in the right mindset for the forthcoming flight, and to mentally 'fly' the routine before ever even getting into the cockpit before actually doing so.

No other team flies such a tight formation as the Blue Angels — their diamond formation is world-renowned for the way the jets fly just feet apart. While the pilots are intensely concentrating on their flying, Kesselring’s calm, animated voice is leading through every evolution. If something isn't right, it could very well be the boss's tone on the radio aligned with the precise moment of the show that is the first indication.

The video is yet another reminder of the almost super-human level the Blue Angles are operating on and why the team leader in a flight demonstration squadron plays such an important role in all aspects of how a team like the Blue Angels performs. They are literally the voice inside their teammate's heads.

It’s the thought that counts, right?

The famous flight demonstration team is set to get a total of 18 Super Hornets to replace its existing F/A-18 Hornets by the end of the year.