Northrop’s “Whale” stealth battlefield surveillance jet was revolutionary. Now we get a better look into the program from someone who was there. 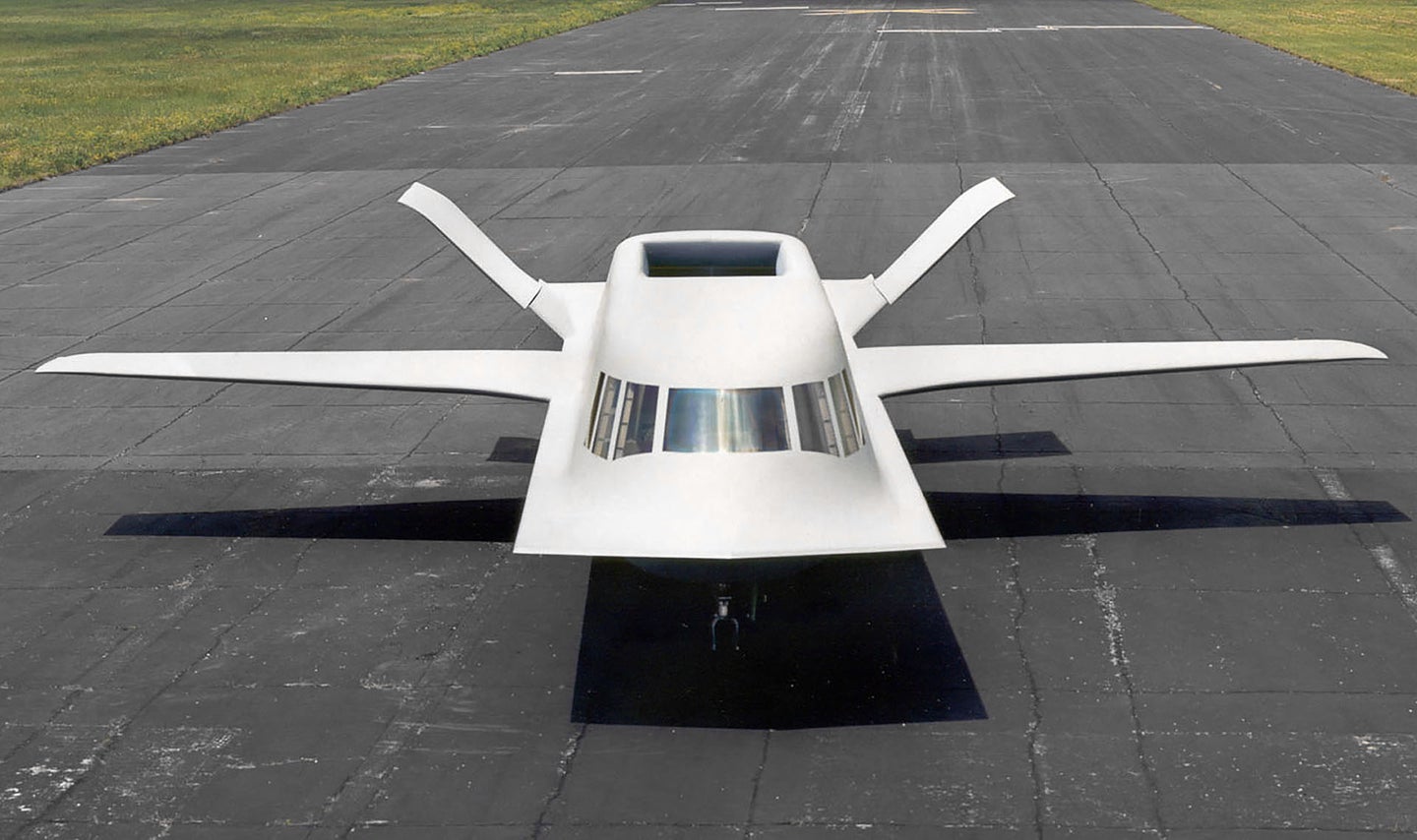 The fantastic 10 Percent True YouTube channel, the creation of Steve Davies, recently had Denny Jarvi on as a guest. Jarvi was an accomplished U.S. Air Force fighter pilot that found himself descending into the shadowy black projects world in the early 1980s to help run the top-secret Battlefield Surveillance Aircraft-Experimental (BSAX) demonstrator program, better known as Tacit Blue. In the interview, Jarvi gives a frank account of many of the finer details of what is understood to have been one of the most transformational secret aircraft test programs in known history, although it is often overshadowed by Lockheed's Have Blue stealth demonstrator that came before it.

Northrop's “Whale” demonstrator, the centerpiece of the Tacit Blue program, is maybe most famous for its absolutely homely looks. “Wow, haha, this is not the prettiest machine I’ve ever seen,” was Jarvi's first impression of the aircraft after setting eyes on it. Yet it was a product of the early days of the stealth revolution, which broke all traditions when it came to what a combat aircraft should look like.

Tacit Blue aimed to prove that a surveillance aircraft could persist for long periods of time over the front lines of the battlefield while collecting very high-fidelity intelligence and survive to repeat the task the next day. This was a huge departure from past spy aircraft like the SR-71, which basically took a snapshot in time. With the help of stealth technology and highly tailored sensors and communications systems, Tacit Blue proved that an aircraft could deliver what would be akin to a constant feed of near real-time intelligence over or very near the most hostile places on earth. It was like going from taking a Polaroid picture at a birthday party to filming the entire party without anyone even knowing you were there. Simply put, Tacit Blue's success represented a quantum leap in how intelligence could be gathered from the air and its accomplishments still reverberate throughout the U.S. military today.

The video is well worth a watch in its entirety. Jarvi's recollections are highly interesting and they help add color to what is, unfortunately, something of an obscure footnote in military aviation history.

With that being said, here are some of the major takeaways from Jarvi's discussion with Davies:

Once again, these were just some of the most interesting points in Davies' interview, and you should watch the whole thing in full. If you want to know what it was like flying the Whale, check out this previous piece of ours.

The Whale's exotic design was very much a harbinger of what was to come in terms of stealth technology. Its continuously curving surfaces, buried engines with serpentine ducts and platypus exhausts, widely splayed v-tail, and pronounced chine lines not only were adopted by the YF-23, and to a large degree, the B-2, but to this very day, low-observable designs leverage these same features. In fact, even very modern aircraft and cruise missile configurations can look stunningly like the Whale. Still, it could be argued that some of those features were at least notionally established before Tacit Blue, but nobody had flown a manned aircraft that put them all together, let alone one that could carry big and powerful radar.

In the years and decades that followed the Tacit Blue program, bolstered by more powerful computing and a better understanding of stealth technology, even Lockheed's original faceted stealth concept gave way to the much more Whale-like ever-morphing curvilinear designs.

In retrospect, it is amazing just how much Northrop got right on their second try at bringing a stealth demonstrator to life; you can read about the first try in this past piece of mine. Above all else, it proved that penetrating and persistent reconnaissance could be an absolute revolution in aerial surveillance. In that sense, it was the forebear to the abortive RQ-3 Darkstar program of the later 1990s and eventually the very much operational RQ-170 Sentinel.

I believe it is very possible that something did come after Tacit Blue. A missing link between what the program proved in terms of the potential that penetrating and persistent aerial reconnaissance through stealth technology showed and the drones that followed later to accomplish a similar mission, albeit updated dramatically for the post-Cold War era. You can read more about that here.

Maybe the biggest tribute to Tacit Blue could emerge on the horizon nearly 40 years after the Whale first flew. While the Pave Mover program did produce the E-8 JSTARS radar aircraft, that mission is likely going to be handed over to a distributed network of stealthy drones as converted airliners won't be able to get safely within the distance of target areas for their radars to even be effective during a peer-state conflict, nor can they be as effective even if they could. The likely centerpiece of such a capability is the still-in-the-shadows "RQ-180." This is a very stealthy, high-flying aircraft that can penetrate and persist in highly contested airspace while executing a similar, albeit far more advanced mission to that of Tacit Blue, one adapted for a new era of peer-state tensions. It is also almost certainly a Northrop Grumman product. You can read my full take on this aircraft here.

To think that it all began on the bleeding edge of what was possible, out in the desolate expanse of Area 51 and in the bustling halls of Northrop, the Pentagon, and Wright Patterson AFB, among other locales, nearly four decades ago, thanks to highly dedicated and talented people like Denny Jarvi.

The YF-23 was an amazing combination of cutting-edge innovations that we are still learning about. Its digital flight control system was no different.