Preorders For This Electromagnetic Rifle Are Being Taken For $3,775

Arcflash Labs has developed what it calls the world’s first and only handheld Gauss rifle, capable of firing metal projectiles at lower velocities. 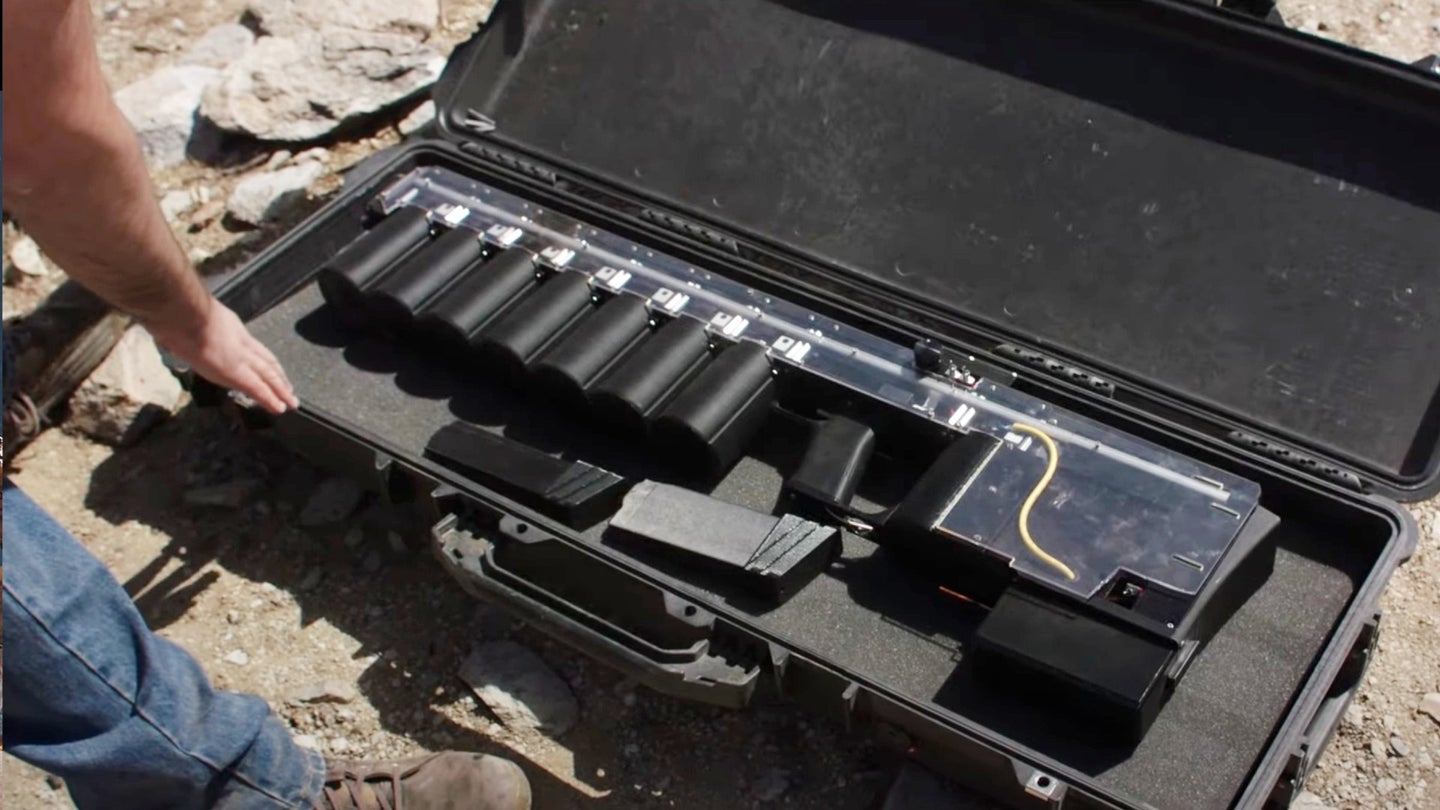 The U.S. Navy may have shelved its railgun program, but that doesn’t mean you can’t get a similar futuristic weapon for yourself. One ambitious company is offering what it is calling “the world’s first and only handheld Gauss rifle” for pre-order for the price of $3,375. The rifle is claimed to be capable of shooting a wide variety of metal projectiles using powerful magnets. Obviously, there are outstanding questions about how well the Gauss rifle works and how safe the system is, but the company's CEO tells us that military and law enforcement agencies have already expressed interest in the weapon.

The GR-1 Anvil Gauss rifle is made by Arcflash Labs, LLC, the co-founder of which, David Wirth and Jason Murray, are "Aerospace Engineers, former US Air Force officers, and experts in pulsed power supply development with 20 years of combined experience," according to its website. The company says the weapon is “capable of accelerating any ferromagnetic projectile (under 1/2″ in diameter) to 200+ fps [feet per second]” and can produce up to 100 Joules of force, or 75 foot-pounds, similar to the muzzle energy of some .22 rifles, making it the “most powerful coilgun ever sold to the public, and also (very likely) the most powerful handheld coilgun ever built.”

Gauss rifles, or coilguns, use electrified coils to generate a magnetic field that accelerates ferromagnetic projectiles to high speeds. This is a similar, but distinct concept from railguns, which, as their name implies, get their projectiles going using field generated between current-conducting rails.

While many handheld coilgun designs have been shown off over the years, we've yet to see one that can deliver enough force to be useful in any type of military or security setting.

Arcflash's rifle measures 38 inches in length with a barrel length of 26 inches, weighs 20 pounds, and is powered by a 25.2-volt lithium-ion polymer battery (LiPoly) battery. From the images on the company’s website, the rifle’s stock appears to be 3D printed with some acrylic plastic sections bolted on.

The manufacturer says the rifle uses an “advanced capacitor charging system” and a “dual Clamped Quasi-Resonant Inverter.” This allows the Gauss rifle to fire up to 20 rounds per minute at maximum power, or up to 100 rounds per minute while operating at half power. The rifle also features a novel trigger system that allows a user to pre-charge the system by depressing the trigger lightly before firing it with a full pull.

As for actual ammunition, since the GR-1 accelerates projectiles uses magnetic fields, any iron-rich metal slug with a diameter between 11mm and 12.6mm and a length between 30 and 52mm could be fired from this handheld weapon, at least in principle. Arcflash Labs offers a range of standard "armature" projectiles that can be used, and notes that they are “NOT RESPONSIBLE for damage to the unit or personal injury caused by firing non-OEM armatures.”

In addition to this warning, the rifle's owner’s manual offers the following disclaimer:

Arcflash Labs Co-Founder David Wirth says that weapons like the company’s Gauss rifle will become more common as these technologies develop and come down in price and weight. “It’s not a matter of if, but when gunpowder will be succeeded,” Wirth told The Firearms Blog. "It’s a one thousand-year-old technology. It works fine. But we think we’ve got something better. There’s tremendous potential here, but the technology is still in its infancy.”

The War Zone reached out to Wirth, who previously worked for three years in the U.S. Air Force Research Laboratory (AFRL), an organization well known for its work on advanced weapon systems and other high-tech research and development. The Arcflash founder said the company is currently "putting [the rifle] out there and saying 'here's what the technology can do.' It's kind of a technology that's looking for an application."

"We've had some inquiries from military and law enforcement who want to use it for scalable effects, and of course from hobbyists who just want to mess around with it," Wirth added. "We're really just exploring the application space." Wirth was unable to tell us which specific agencies approached his company, but says that most of the inquiries were about using Arcflash's coilgun technology to fire non-lethal projectiles, such as rubber bullets or pepper spray balls. Since coilguns use electromagnetism to propel projectiles, these munitions would require ferromagnetic sabots or embedded iron shavings in order to be fired.

"The reason they're interested in coilguns versus a CO2-powered thing is because with a coilgun, you can instantly change the power on it so you can dial it down if you're close to a target so it won't hurt somebody, or increase the power if you're further away and get the effect you want," Wirth told The War Zone.

Obviously, a Gauss rifle with the muzzle velocity close to a .22 Short isn't going to be hitting the battlefield anytime soon. Arcflash has sold other lower-powered models in the past. The Firearms Blog did describe the GR-1 as a “novel armament concept to circumvent the need for gunpowder, avoid firearms infringement and provide a new way to arm yourself." This highlights how it might be possible to purchase this weapon without issue in jurisdictions in the United States, as well as elsewhere around the world, where there might be more stringent restrictions on the sale of traditional firearms. This could be an important selling point for these rifles on the civilian market, but how long a lack of regulation would actually last is up for debate.

It's uncertain if the manufacturer's claims of being the only handheld coilgun on the planet are indeed accurate, but a video released last year by the Logistical Engineering University of the People’s Liberation Army claims similar weapons are currently being developed in China. Like the Arcflash labs GR-1, the weapons in the Chinese video appear low power. Wirth tells us that scaling up such a handheld weapon to higher levels of power would require much more weight, and would thus take the weapon out of the hands of personnel and would require it to be mounted on a trailer, tripod, or larger vehicle.

Historically, coilgun, as well as railgun, concepts have been expected to need extreme amounts of power, and be very large as a result, to be viable military weapons. For instance, the U.S. Navy experimented with a high-velocity railgun intended for use aboard surface vessels for years, and was able to fire rounds at speeds greater than 4,500 miles per hour, or around six times the speed of sound, during land-based testing. Despite the progress made, the program was finally axed in this year's budget. It's unknown how much of the program's research and development could have moved on to classified programs, if any, although now-retired Navy Admiral John Richardson, then Chief of Naval Operations, stated in 2019 that the service had "learned a lot [about] the engineering of building something like that that can handle that much electromagnetic energy and not just explode," adding that "It's too great a weapon system, so it's going somewhere, hopefully."

Other countries, including China, are still pushing ahead with similarly-sized railgun concepts.

So, while massive, ship-based railguns or high-powered Gauss rifles may be years away from deployment, if the Arcflash Labs' claims prove true, you can at least get your hands on a very low-powered version for just a few thousand dollars.

The Army Is Working On A Mini Assault Rifle That Performs Like An M4, But Is Half As Big

The Army says the core technology could help in the development of lighter, smaller rifles and machine guns, too.