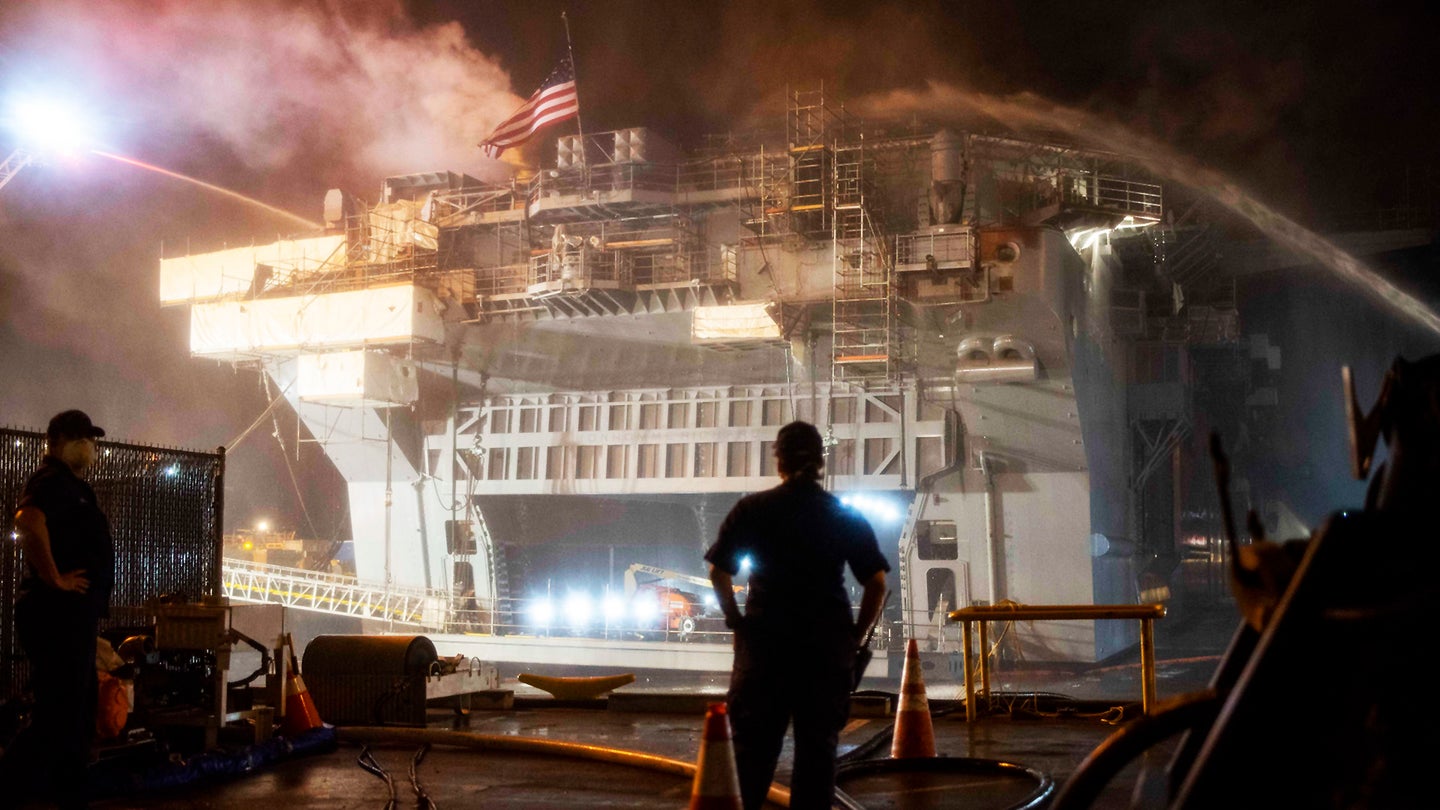 The U.S. Navy will begin preliminary hearings to determine if it will bring arson charges against a sailor accused of starting the 2020 fire that damaged the amphibious assault ship USS Bonhomme Richard (LHD-6) so extensively it had to be scrapped. During the Article 32 preliminary hearing, an officer will review all of the available evidence before determining whether or not charges should be formally referred against the accused. The sailor has not yet been identified.

On July 29, charges under the Uniform Code of Military Justice [UCMJ] were brought forth against a Navy Sailor in response to evidence found during the criminal investigation into the fire started on USS Bonhomme Richard (LHD-6) on July 12, 2020. Evidence collected during the investigation is sufficient to direct a preliminary hearing with due process under the military justice system. The Sailor was a member of Bonhomme Richard’s crew at the time and is accused of starting the fire.

Vice Adm. Steve Koehler, commander, U.S. 3rd Fleet is considering court-martial charges and has directed a preliminary hearing at which an impartial hearing officer will make determinations and recommendations required by the UCMJ prior to any further trial proceedings - including whether or not there is probable cause to believe an offense has been committed and to offer a recommendation as to the disposition of the case.

Officials told the Navy Times they expect the hearing to be held by the end of this summer.

85 crew members were living aboard the ship when the fire broke out last July. The fire caused an explosion and then raged for four days before Navy crews fighting the blaze alongside the San Diego Fire-Rescue Department were able to extinguish it. By the time the fire was out, sections of the flight deck were warped by the intense heat and parts of the island superstructure had collapsed. 63 sailors and civilian firefighters were injured fighting the fire.

After reviewing the extent of the damage, the Navy determined it would be too expensive to attempt to repair the ship or convert it to another use. The decision was then made to decommission and scrap the Bonhomme Richard

at a cost of $30 million. The damaged vessel was towed through the Panama Canal on its way to Texas for dismantling.

The Naval Criminal Investigative Service (NCIS) began an investigation into the arson in August 2020. Earlier this month, emails from the San Diego Fire-Rescue Department obtained by the Navy Times revealed that the service was consulting with legal counsel, suggesting that charges could be brought.

The emails also revealed that several other smaller fires broke out aboard three other San Diego-based ships in the 15 months leading up to the fire that eventually saw the Bonhomme Richard scrapped: a March 2019 fire on the USS Boxer (LHD-4) Wasp-class amphibious assault ship; one aboard the Avenger-class mine countermeasures ship USS Champion (MCM-4) in November 2019; and a March 2020 fire on the USS Harpers Ferry (LSD-49), the lead ship of the Harpers Ferry class of dock landing ships. It’s unknown if the suspect in the Bonhomme Richard fire was in any way involved with those other fires.

We will continue to update our reporting as more information becomes available.