Can The President Order Troops To Get The COVID-19 Vaccine? (Updated)

Getting vaccinated against coronavirus has been optional for military personnel, but could that change? Here’s what we found out. 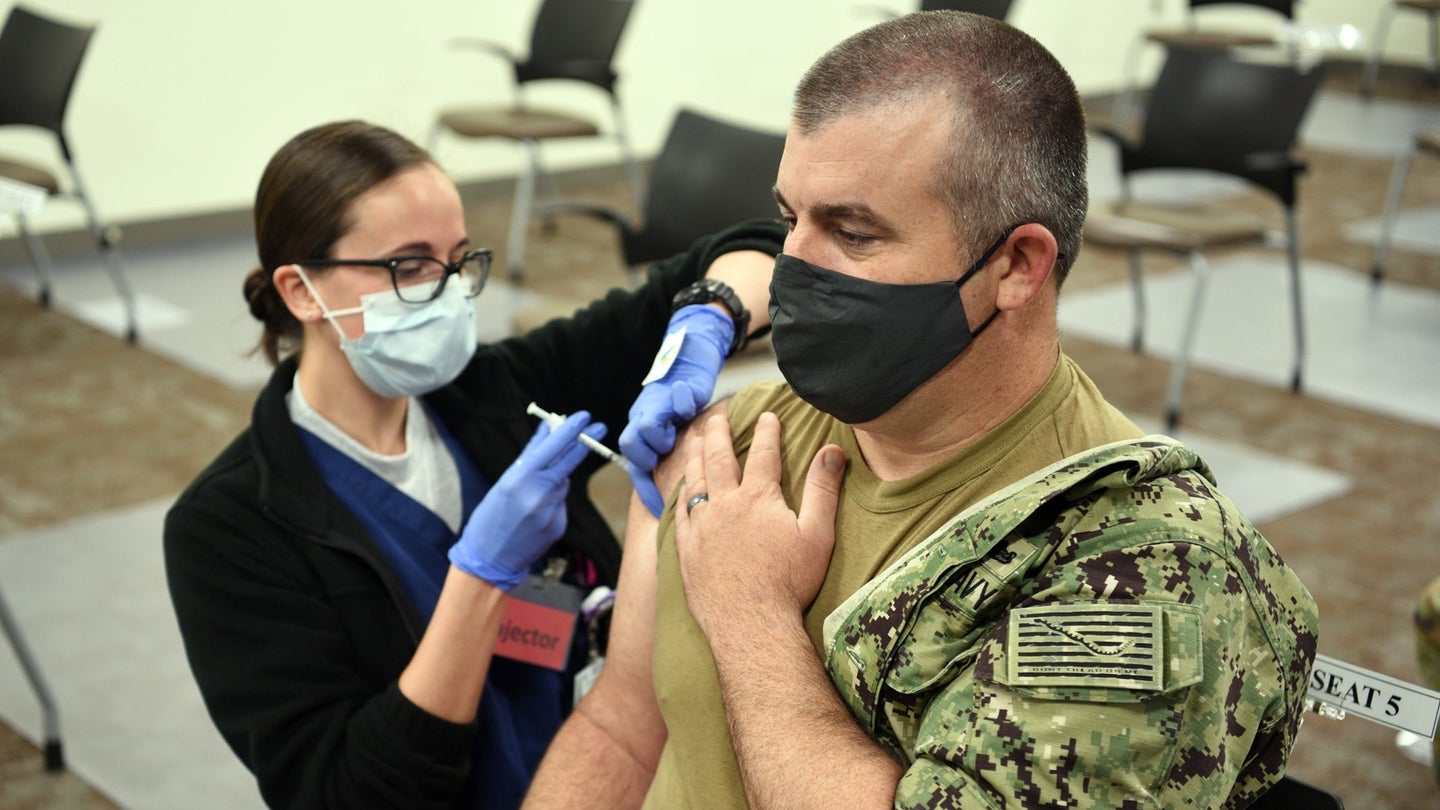 President Joe Biden is expected to announce that federal employees will be subject to new rules regarding being vaccinated against the COVID-19 virus tomorrow, but those provisions are reportedly not set to apply to military personnel. At present, the Department of Defense is not mandating uniformed or civilian personnel get one of the available vaccines under established rules that allow individuals to refuse such medications that have not been formally approved by the Food and Drug Administration (FDA). The President does have the authority, at the request of the Secretary of Defense, to waive this right to refuse on national security grounds. However, the highly politicized nature of the pandemic means that this would almost certainly be a controversial decision.

Reports say that Biden's new guidelines for federal employees will require them to either get vaccinated or submit to more rigorous routine testing and other measures to mitigate their potential to contract and spread COVID-19. This week, the Centers for Disease Control (CDC) also recommended that even Americans that have been vaccinated, but that are living in areas seeing a spike in cases amid the emergence of new strains of the virus, particularly one referred to as the Delta variant, start wearing masks again when indoors.

Military personnel will not have to follow these new guidelines, according to reports. However, the U.S. military, roughly 48 percent of which is presently fully vaccinated, including personnel assigned to reserve and National Guard units, with more partially vaccinated, has also adopted new mask rules.

"We anticipate that this [the COVID-19 vaccines] will be approved using Emergency Use Authorization [EUA], not a fully-licensed FDA vaccination, and as such, the department's policy will be voluntary for everyone," U.S. Army Lieutenant General Ronald Place, the Director of the Defense Health Agency, explained in December 2020, before Biden's inauguration. "So there's no if, ands, or buts about it – doesn't – doesn't matter. Voluntary for everyone."

That policy remains in place, though senior U.S. military officials have encouraged servicemembers to get vaccinated. Just in May, Deputy Secretary of Defense Kathleen Hicks and Vice Chairman of the Joint Chiefs of Staff U.S. Air Force General John Hyten issued a memo outlining ways to incentivize people to get their shots. The document recommended focusing on four key areas: accessibility, education, personnel policy, and engagement at the lowest level of the chain of command.

However, Department of Defense Instruction 6200.02, titled Application of Food and Drug Administration (FDA) Rules to Department of Defense Force Health Protection Programs, says plainly that the Secretary of Defense can ask the President to waive the ability of service members to refuse EUA medications under certain circumstances.

At the time of writing, there have been a total of 312,892 confirmed COVID-19 cases across the U.S. military, and 373 fatalities, since the pandemic began, according to the Pentagon. In one particularly infamous instance, an outbreak of the virus sidelined the U.S. Navy supercarrier USS Theodore Roosevelt last year, an incident that subsequently exploded into a political firestorm after the captain of the ship at the time, Brett Crozier, raises serious concerns about the potential danger to his crew, which then leaked to the media.

The Delta variant is even more contagious than the strains originally identified and has demonstrated an ability to infect even vaccinated individuals. However, vaccines, so far, have also been credited with limiting the severity of those so-called "breakthrough cases."

All told, it's not necessarily hard to envision a national security justification for making vaccinations against COVID-19 mandatory. Hicks and Hyten's memo bluntly states right in the first sentence that Secretary of Defense Lloyd Austin has repeatedly declared the virus to be "the greatest proximate challenge to our Nation's security."

At the same time, given the political dimension of the pandemic in the United States, it is equally difficult to see how the Biden administration would not court controversy, and potential legal challenges, by making such a decision. Making the COVID-19 vaccines mandatory could be controversial even after they are formally approved by the FDA and the U.S. military has faced such issues in the past, even before the current pandemic.

In 1997, President Bill Clinton's administration made a vaccine against anthrax, which had received limited FDA approval, mandatory across the U.S. military. Members of Congress, as well as the Government Accountability Office (GAO), a congressional watchdog, subsequently raised questions about its efficacy and safety. A formal legal injunction in 2004 halted compulsion anthrax vaccinations in the military.

The FDA issued an EUA for the anthrax vaccine in 2005 and re-approved it later that year. The Department of Defense began administrating it again in 2006, but on a more limited basis. At present, FDA-approved vaccines against both anthrax and smallpox are not universally mandatory across the U.S. military.

Biden's expected exemption of the military from the new vaccine rules, together with Hicks and Hyten's memo, makes clear that, at least for now, the Department of Defense would prefer to use non-compulsory incentives, rather than mandates to increase vaccination rates across the services. However, there could be growing calls to change that position as time goes on, especially if the Delta variant or new strains continue to present a significant danger to unvaccinated individuals, and even certain people who have gotten their shots.

The Associated Press has reported that the Biden administration has asked the U.S. military to develop a plan to make vaccinations against COVID-19 mandatory. However, details are still limited regarding how it might proceed in doing so.

As expected, President Joe Biden rolled out new rules regarding COVID-19 vaccinations, and what unvaccinated individuals will need to do going forward, today, but those rules are not set to apply to members of the U.S. military, at least not yet. There are reports that a vaccine mandate for the U.S. military could be coming soon, but that could likely be tied to formal FDA approval of one or more of the existing vaccination options.

reported earlier this month that a U.S. Army directive had indicated that the FDA could sign off on at least one vaccine by Sept. 1. "I believe that when it's [a COVID-19 vaccine] formally approved, which we expect pretty soon, we probably will go to that [a mandate], and then that question will kind of be moot," U.S. Navy Vice Admiral John Nowell, the service's Chief of Naval Personnel, said during an online town hall in June.