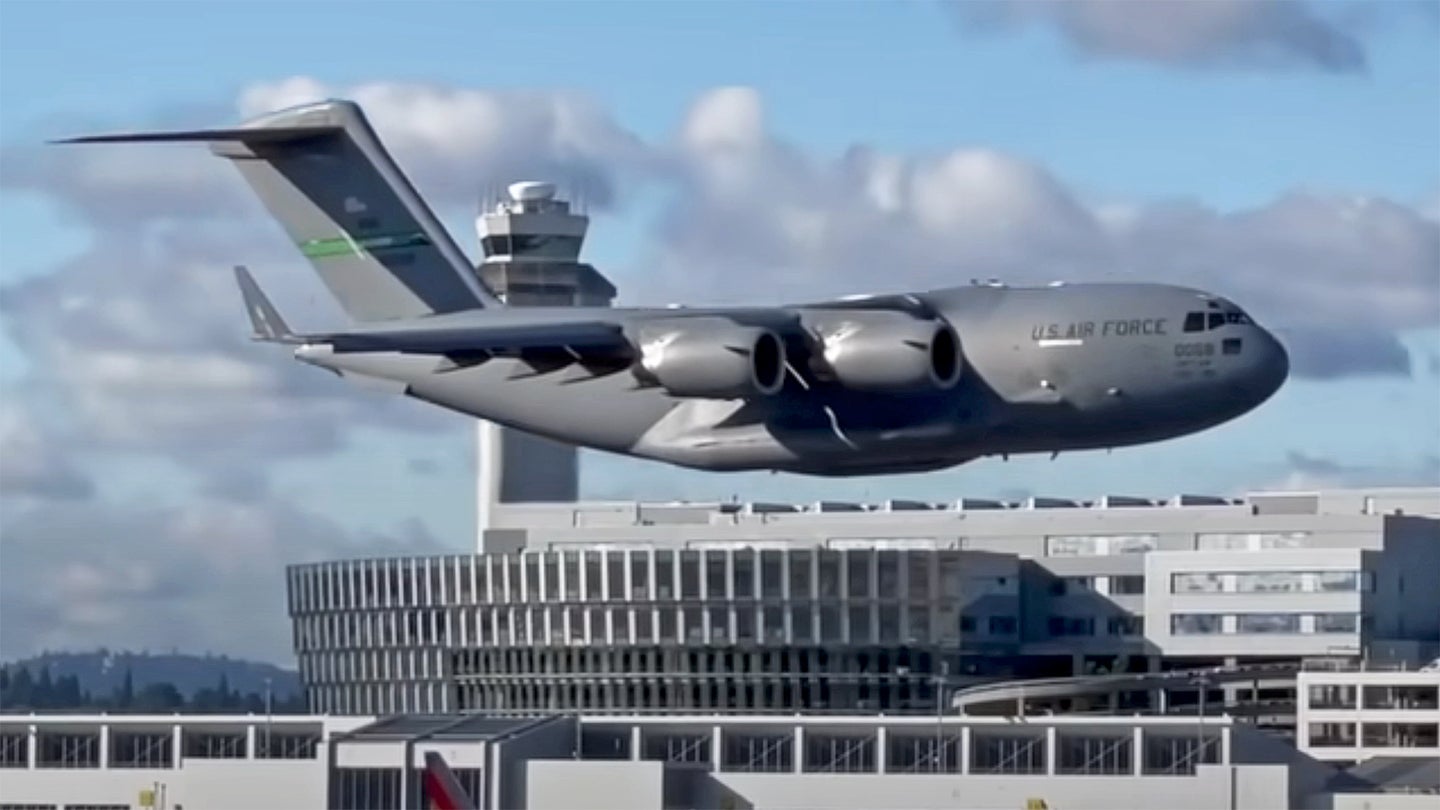 alert F-15s for training. The video came to us from our friend @big_seans_aviation and drew a lot of interest. At the time we speculated that the crazy-looking takeoff was practice for executing short-field tactical departures in hostile areas. Now the pilot who was actually at the controls has given us unique insights into exactly what we are seeing in the dramatic video.

Lt. Col. Bruce Cohn, a C-17 Instructor Pilot with the 97th Airlift Squadron out of McChord Field, located just outside of Tacoma, Washington, told The War Zone the following about the high-performance takeoff in question:

In the video you’re seeing a combination of two takeoff capabilities of the C-17. First, you’ll notice that the aircraft rotates well before the A3 taxiway on runway 28R, resulting in a takeoff distance of less than 2500 feet – demonstrating the short field takeoff capability of the C-17. Secondly, you can see that we level off just above the runway, accelerate and then initiate a short but steep climb prior to the departure end. This is a demonstration of a low altitude tactical departure, used for negating a small arms threat near an airfield. This is one of several types of tactical departures C-17 pilots are trained to perform. The type of tactical departure used is dependent upon the threat the crew is defending against. Tactical departures such as this one were used regularly in Afghanistan and Iraq.

Like most flight events, there is a training currency associated with this one. C-17 pilots must log a minimum of 2 tactical departures every 6 months.

It sounds like our original assessment was pretty spot on, but this adds a lot of great detail.

Cohn also described the unique relationship between his unit at McChord and Portland's Eagle squadron, as well as what it's like being intercepted by them for training:

The partnership between the Redhawks (123rd Fighter Squadron) and the three Reserve C-17 squadrons (446th Operations Group) at McChord is a home-grown collaboration that has been superb. The F-15s have a multitude of training requirements that go with their alert commitment and with the C-17 we are able to provide a platform that can mimic various targets of interest for them.

On our end, the ability to take part in tactical scenarios with friendly escorts (Blue Air) and be targeted by hostile fighters (Red Air) is invaluable to our training and preparation for future encounters. The proximity and capabilities of our squadrons make this partnership something we plan to continue and build upon.

The Redhawks are outstanding hosts! Obviously flying and mixing it up with the F-15s is great training but it's also a lot of fun too. So, if you live in the Portland area don’t be surprised to see a McChord C-17 show up from time to time.

So there you have it, straight from the C-17 Instructor Pilot's mouth!

Author's note: A big thanks to Lt. Col. Cohn for explaining things!