LongShot is an initiative to give combat aircraft their own drone able to fly out and engage enemy aircraft over long distances with its own missiles. 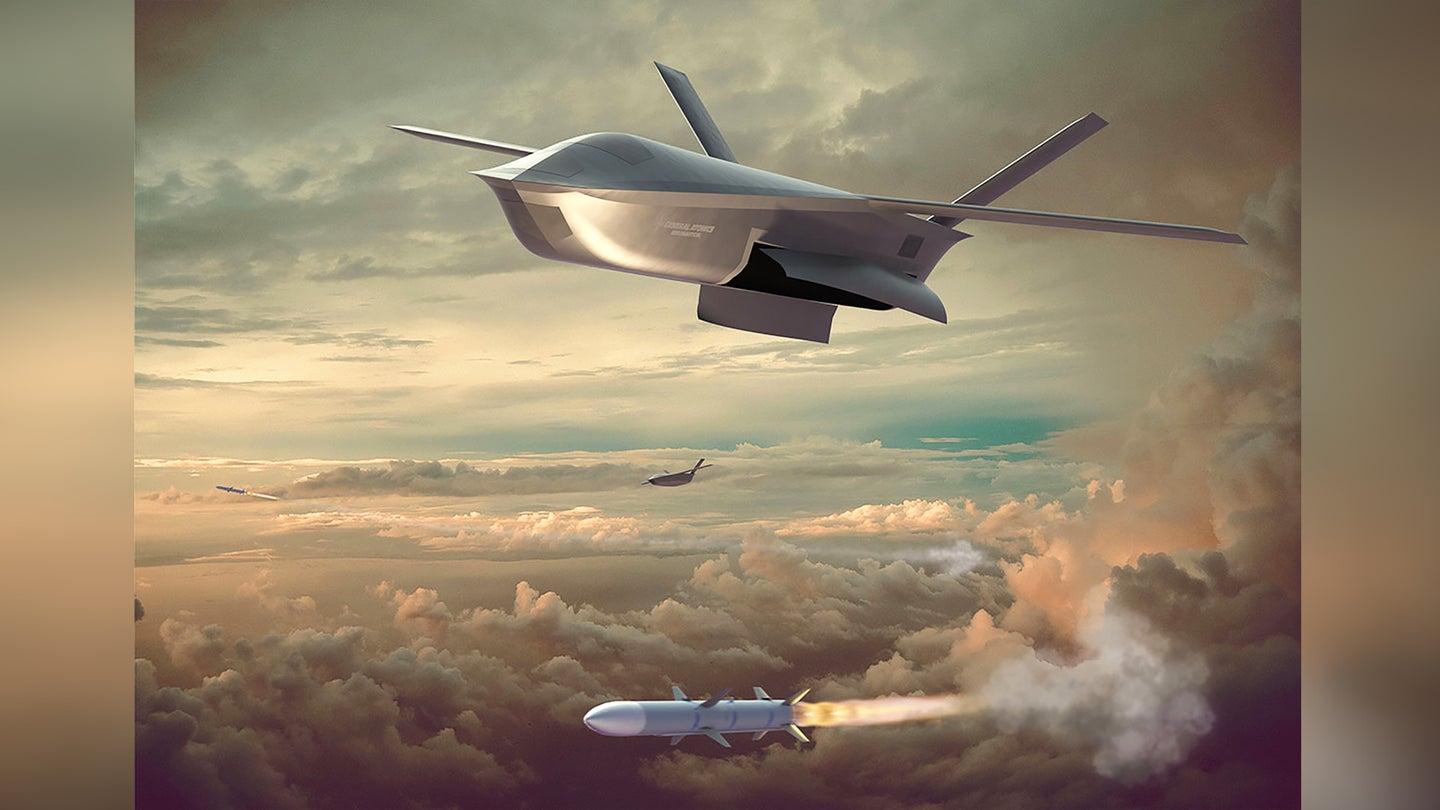 General Atomics Aeronautical Systems, or GA-ASI, has revealed for the first time an artist’s impression of a missile-carrying air-to-air combat drone that it is developing as part of the Defense Advanced Research Projects Agency’s LongShot program. GA-ASI, as well as Lockheed Martin and Northrop Grumman, is working on this project, which calls for an unmanned aircraft that can be launched in mid-air from a manned aircraft before flying into potentially more hazardous environments and engaging aerial threats using its own missiles.

The latest artwork, seen at the top of this article and initially revealed in a recent article on the GA-ASI website about small unmanned aircraft systems, or SUAS, shows a stealthy-looking drone with a prominent chine around the center of its fuselage, the line tapering to meet a high-mounted fixed wing that apparently has only moderate sweep. There is a prominent V-shaped tail and we can see a weapons bay on the side of the rear fuselage, with two doors, but it’s not clear if there’s a symmetrical one on the opposite side.

It’s hard to gauge the size of GA-ASI LongShot, although it’s clearly big enough to accommodate radar-guided air-to-air missiles, including what appears to be an AIM-120 Advanced Medium-Range Air-to-Air Missile, or AMRAAM. With that in mind, it’s notable that the LongShot concept artwork from DARPA and Northrop Grumman both showed what appeared to be new, smaller-sized AAM designs. Various panels around the airframe could be meant to represent conformal antennas for onboard sensors, but it is hard to say for sure.

The powerplant cannot be immediately determined, but it would appear to be a rear-mounted turbine. This would reflect DARPA’s own LongShot concept art, showing a stealthy cruise missile-like vehicle, with pop-out fins. Overall, however, both the GA-ASI and Northrop Grumman LongShot concepts depict drones that are much more “aircraft-like” than the DARPA artwork, which seemed to have more in common with a cruise missile or remote carrier.

GA-ASI also provides more details about how the company expects the LongShot to be employed in combat, describing a “small system” that “will help clear the way through the skies,” and that will “charge into hostile airspace armed with its own air-to-air missiles, able to fire on enemy targets if it were so commanded.”

“It could initiate a fighter sweep ahead of a strike wave without putting a human crew in danger, or it could join an attack alongside the vanguard with human-crewed warplanes.”

All this certainly fits in with our understanding of the LongShot thus far, as a means of extending the reach of the launch platform in aerial combat, while also reduce its vulnerability to hostile aircraft or air defenses.

The company mentions that LongShot could be launched from either a manned aircraft or from a larger drone and that one option would be for it to be carried by bombers, providing them with a “potent new anti-air capability.”

In the bomber-launched scenario, the LongShot is described as being launched after “allied battle networks” detect hostile fighters, rather than its launch necessarily being commanded based on what the bomber's own sensors 'see.' In this way, the LongShot would stand in for a manned fighter escort, protecting the bomber and allowing fighters to be tasked with other missions.

While adding LongShot to legacy bombers, such as the B-52H, is a clear goal, also integrating it with the upcoming B-21 Raider stealth bomber, and making it so that it can fit in its weapons bay, would also be very beneficial. The Air Force has already talked about its forthcoming B-21 as potentially having air-to-air capabilities, but exactly in what manner remains undisclosed. One option could be the use of a counter-air drone system like LongShot. The Raider will have optionally manned capabilities, which could also be leveraged if it were to be employed as a possible LongShot launch platform.

The LongShot program is still relatively new, DARPA only having announced the contract awards back in February, after it had been included in the Pentagon’s budget request for the Fiscal Year 2021. Before that, however, there was also work on the Flying Missile Rail (FMR) program, which aimed to explore similar technologies, with a separate focus on advanced manufacturing and rapid prototyping concepts.

As for LongShot, there remain many question marks around it, not least of which is what kinds of air-to-air missiles will arm it. It’s conceivable that the drone might be capable of carrying the long-range AIM-260 that is now under joint development by the Air Force and Navy, and/or a smaller-sized design like the Lockheed Martin Cuda or Raytheon Peregrine, which should allow a greater quantity of weapons to be carried, as well as the AIM-120. Considering another aircraft has to carry LongShot, size and weight will certainly be a factor, so limiting its ability to carry larger weapons may be a necessity. Regardless, the idea is that an AAM can be combined with the standoff LongShot to engage targets not only much further away from the manned aircraft or drone that launched it but also to counter different threats from a variety of vectors and leverage new and more deadly cooperative tactics.

As we have discussed before, the fact that the LongShot can launch a missile closer to the target means the weapon retains a high level of energy, making it harder for the target aircraft to escape. Having these hard-to-detect systems flying in a counter-air role will also greatly complicate the enemy's ability to defend themselves in an aerial engagement. One can imagine how it could give an aircraft like the F-15EX a massive capability boost, with the jet working as a 'quarterback,' as well as a sensor and communications node, with the LongShots heading into more deeply defended territory to take out enemy aircraft.

How the LongShot will actually cue its missiles onto a target remains unclear, but it’s highly probable that datalinks would provide targeting data, either supplied from the launch aircraft/drone, or from a wide variety of sensor-equipped platforms. On the other hand, the artwork at least does raise the possibility that the LongShot could be equipped to carry some kind of sensors of its known, but there is no confirmation of this.

All in all, LongShot seems to offer a variety of options to enhance the air combat capabilities of manned and unmanned aircraft alike, potentially with a comparatively low price tag, although so far we don’t know to what degree it’s expected to be attritable, or if, like some of GA-ASI’s other SUAS concepts, it’s actually expected to be recovered and reused.

Whatever the case, the program certainly has momentum behind it, at least for now, and GA-ASI’s latest artwork provides a glimpse into exactly what this intriguing concept could look like.