Nearly a year after unveiling its Sparrowhawk unmanned aircraft, General Atomics has given us the first look at how this drone is designed to be recovered in flight. The company has also offered other details about the expected performance and capabilities of the Sparrowhawk, which is also intended to be air-launched from larger aircraft, including unmanned platforms, such as the MQ-9 Reaper.

General Atomics Aeronautical Systems, Inc., or GA-ASI, recently released a detailed look at Sparrowhawk and the current state of its development, along with an accompanying promotional video, as part of a larger overview of various advanced unmanned projects the company is pursuing. The firm had first publicly disclosed the existence of Sparrowhawk in September 2020.

"GA-ASI has developed one game-changing SUAS [small unmanned aircraft system] known as Sparrowhawk, which an aircraft such as the MQ-9 can carry under its wing as it might a traditional payload like a sensor pod or a fuel tank," the company's official news item says. "But when the MQ-9 reaches an area of interest on a mission, it can do something few remotely operated aircraft have ever done – launch the smaller UAS and then recover it in mid-flight."

"The Sparrowhawk might surveil an area and turn back to rendezvous with the aircraft that launched it," it continues. "In a safe area, well away from hostile warplanes or anti-air systems, the larger UAS can snatch the Sparrowhawk out of the sky and continue its mission."

The official video includes a computed generated sequence showing how this recovery process is supposed to occur. The mothership aircraft, an MQ-9B Skyguardian is depicted in this case, deploys a relatively thin line with an orange-colored sphere at the end of it. The Sparrowhawk then approaches the line, "catching" it in the joint between the front of its left wing and its body.

You can watch the full GA-ASI Sparrowhawk video presentation here.

A flap that opens outward from the left side of the drone's body helps steady the line. With the line in this position, a second flap in front of the first one then opens, and the unmanned aircraft banks slightly to the left. The orange ball at the end of the line gets caught between the two flaps, which then close, locking it in place. Sparrowhawk's wings, which are actually a single-piece assembly that swings out 90 degrees when deployed, then return to their stowed position parallel to the drone's body. The mothership aircraft then reels it back in. The entire process is conducted with a high degree of autonomy, according to GA-ASI.

It is worth noting that the promotional video shows the line extending directly from an underwing pylon, but a clip of actual "reel dynamics testing" shows an aerodynamic model tethered to a pod that is then attached to the pylon. It's not clear if GA-ASI expects the final Sparrowhawk design to be able to be deployed straight from a specialized pylon or use some sort of podded arrangement similar to the one seen in the testing. The company had previously released a picture of captive carrying testing showing a test article attached directly to a pylon under the wing of an MQ-9.

The Sparrowhawks themselves, the final iterations of which are expected to be just under 11 feet long and have a wingspan of 14 feet, will be able to fly for at least 10 hours, with a maximum range of around 500 nautical miles, depending on how fast they're going, according to GA-ASI. The drones will be able to hit speeds up to 150 knots, but could also cruise at speeds as low as 80 knots. The unmanned aircraft will feature a hybrid-electric propulsion system that uses a JP-8-fueled motor to provide power to two electric fans, one on either side of the rear body in front of its v-tail.

Compared to the larger mothership aircraft, "the smaller, nimbler, swifter Sparrowhawk is difficult for an adversary to spot as it sprints low along its route," according to GA-ASI. "It does, via connection to its big brother, what remotely operated aircraft have been doing all along: Sends back vital information about what’s taking place, without the cost and risk of involving a human aircrew."

"A SkyGuardian could release a Sparrowhawk with the intention of searching for hostile anti-air systems without needing to worry about the safety of the pilot. Indeed, an air commander’s goal might be to send Sparrowhawk to probe a denied environment so that it could report back about the radar or other systems that powered on or detected it – where they were, what type, and how many," the official news item offers as an example of a potential mission profile. "Once Sparrowhawk is secure, the larger aircraft can return to base – or, relying on its ability to stay aloft for many hours, continue its patrol and even launch another Sparrowhawk elsewhere later from its other wing station."

GA-ASI has stressed that Sparrowhawks will not be limited to intelligence, surveillance, and reconnaissance missions, only. The front end of each one of these drones is a modular bay offering ample space and that is able to accommodate up to 60 pounds of payload, in total. The promotional video specifically mentions radar imaging systems, electronic and signals intelligence packages, and electronic warfare jammers as possible options.

"Sparrowhawk could respond with an electronic attack of its own to clear the way for other aircraft coming in behind it, jamming an enemy radar to deny its ability to sense a strike package passing through the area," GA-ASI explains. "Or the small aircraft could support missions focused on the suppression of enemy air defenses."

Though not specifically mentioned in GA-ASI's release, there is the potential for Sparrowhawks to operate in networked, fully autonomous swarms, as well. The company has said in the past the drone was derived from its submission to the Defense Advanced Research Projects Agency's (DARPA) Gremlins program, which is also focused on the development of air-launched and air-recoverable small unmanned aircraft with swarming capabilities.

A swarm of Sparrowhawks could include individual drones with different payloads, further expanding the capabilities and flexibility of the entire group to conduct a variety of missions. Swarms, by their very nature, also simply have an inherent ability to confuse and overwhelm enemy air defenses.

While GA-ASI is among the companies crafting potential replacements for the MQ-9 in response to a U.S. Air Force effort dubbed MQ-Next, it has also been actively promoting Sparrowhawk as a way for non-stealthy unmanned aircraft, especially its own designs, like the MQ-9 Reaper and its derivatives, to remain relevant in future higher-end conflicts, including those against potential near-peer adversaries, such as China. You can read more about General Atomics' overall vision in this past War Zone piece.

When it comes to Sparrowhawk, as it stands now, GA-ASI says it has completed the design, built the first prototype fuselage, and conducted captive carry tests using representative test articles. The first flight and demonstration of the aerial recovery capability, among other things, are now on the docket, though the exact schedule for these flight test events is unclear.

Regardless, it's very exciting to get a glimpse of General Atomics' master plan for the Sparrowhawk and we will certainly be on the lookout for new details about the drone's development. 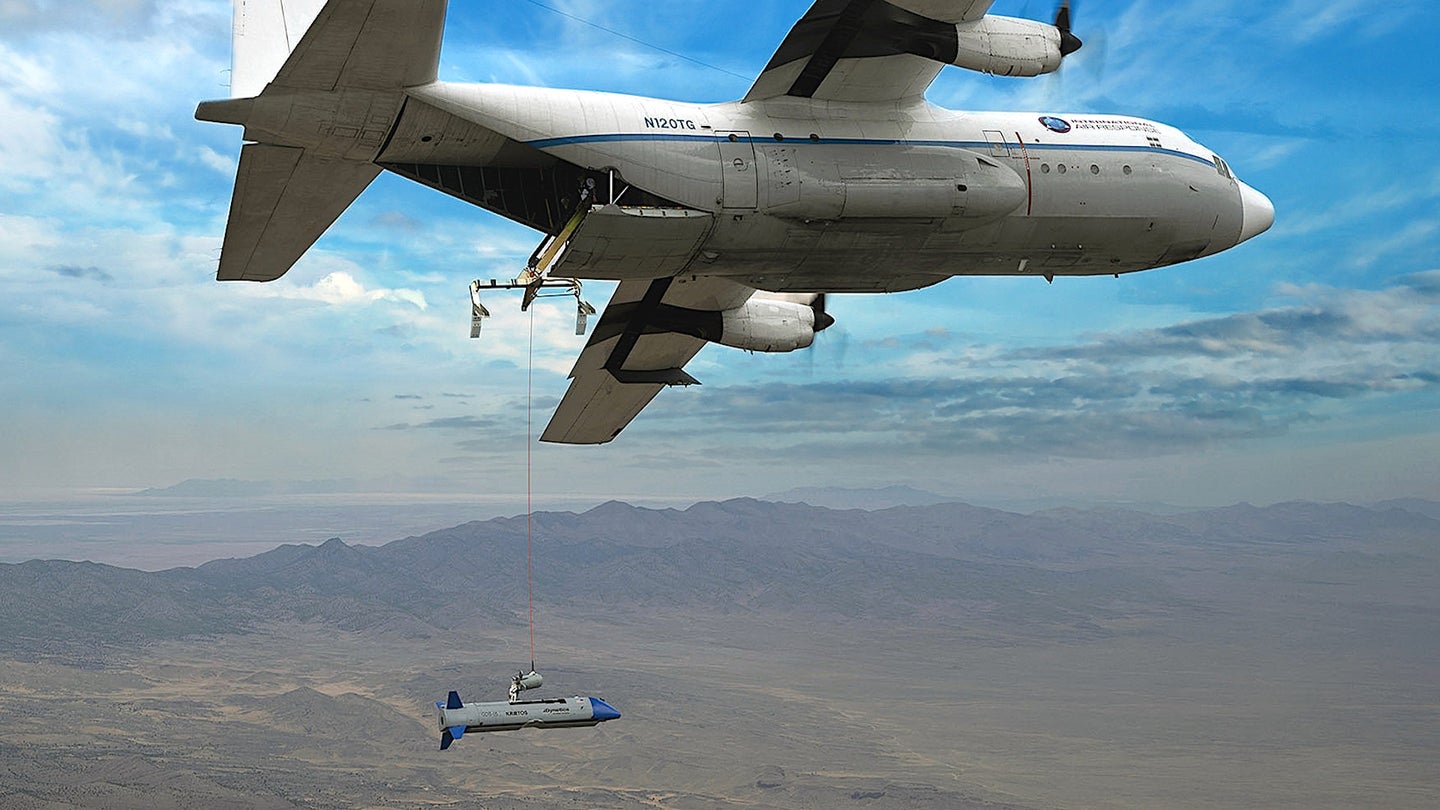 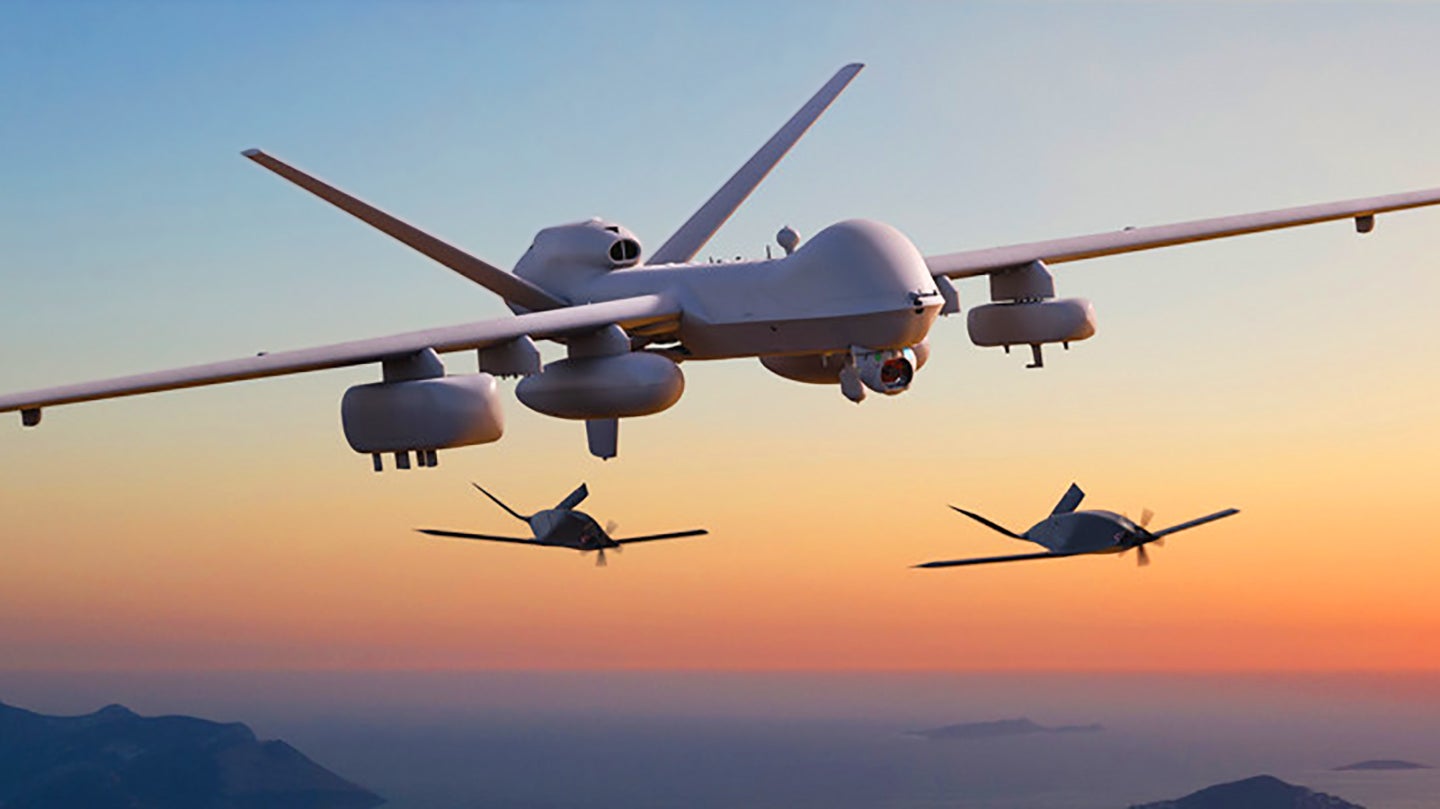 General Atomics drones are gaining the ability to launch unmanned aircraft in mid-air, new self-defense options, and other advanced capabilities. 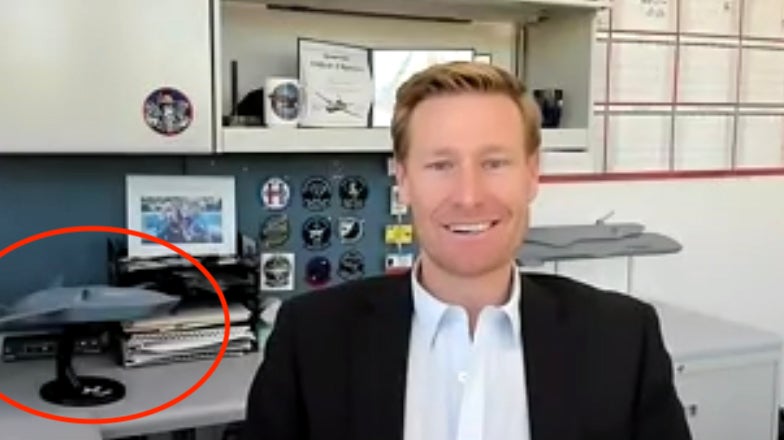 This model, and another we could identify, provide a tantalizing glimpse into the company’s work on high-tech combat drones.