There was only one king of the F-14 Tomcat demonstration and that was Dale “Snort” Snodgrass. 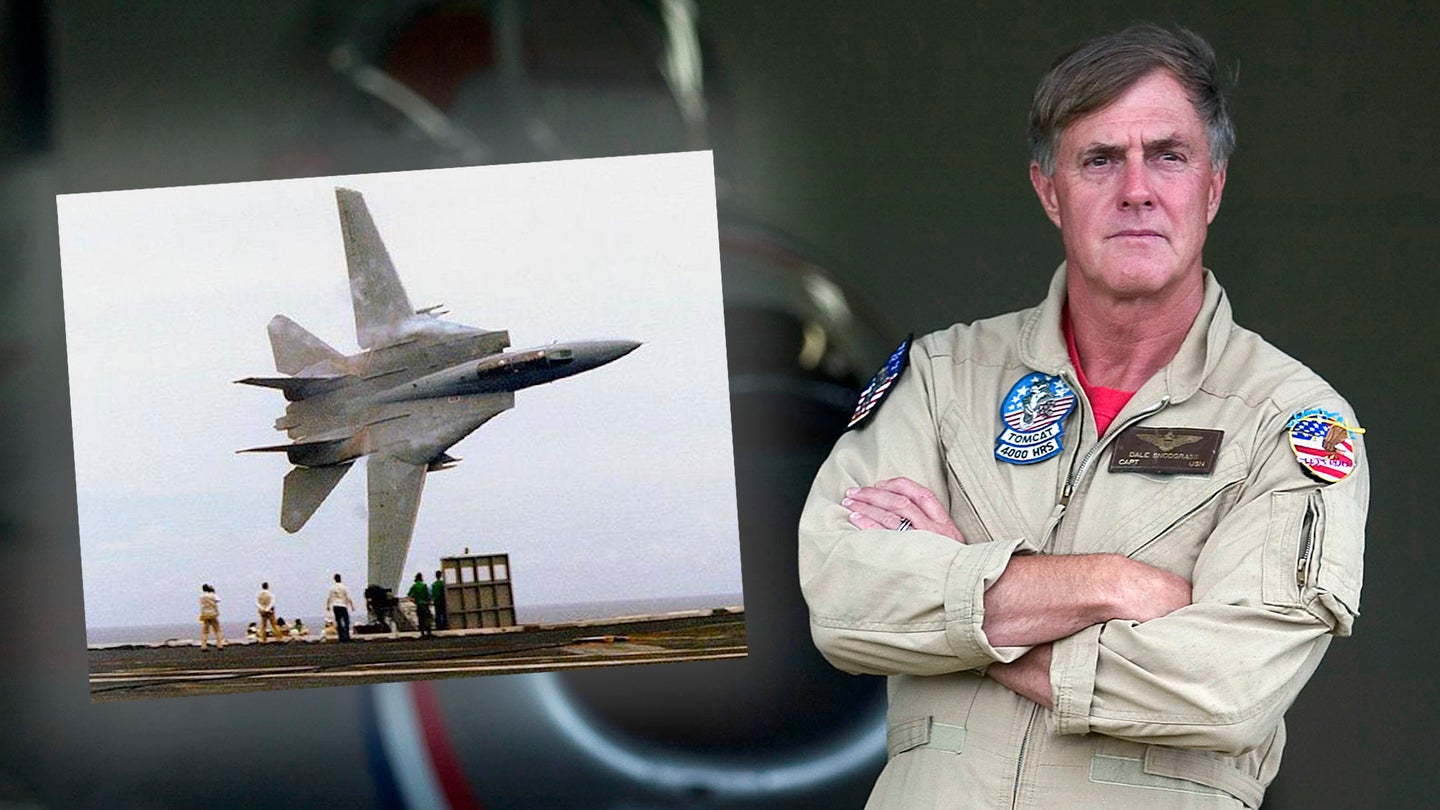 He was from a different era. An era when fighter pilots would meet at the Officer’s Club over a Marlboro Red and a bourbon to debrief the sortie they just flew. A time when the jet did not tell on you, meaning aircrew could get away with a “little more” in terms of altitude, airspeed, and Gs. A time when the fighter pilots were braggadocio enough to consider themselves the cream of the crop but humble enough to know they were prima donnas in the eyes of everyone else. Tomcats. Miramar. TOPGUN.

Maybe the attitude just comes with the territory? If you can regularly land a 54,000lbs jet in the dark of night, on top of a moving aircraft carrier the size postage stamp that is bouncing up and down in the froth of some foreign deep ocean—the world can forgive you for being a little too full of yourself.

Dale “Snort” Snodgrass, legendary naval aviator and F-14 Tomcat pilot, perished in a single plane crash yesterday in Lewiston, Idaho. He was 72 years old. Snort was all the proverbial things associated with the world’s most famous jet fighter. Larger than life, tough as nails, tactical against the most difficult enemy, and respected across all generations. A “fighter pilot’s fighter pilot” as they say.

He lived it, breathed it, promoted it, and flew it.

“I really just wanted to become the best fighter pilot I could be” Snort told an audience at the Smithsonian National Air and Space Museum. Snort did that and even more.

This is a must-watch clip of Snort talking about his love affair with the Tomcat, that began before it even flew:

The general public knew him first from his multiple stints as the F-14 Demonstration pilot. Later on, Snort made the airshow circuit for more than 20 years flying the F-86 Sabre, among many legendary aircraft. Recently, social media, including many video clips from YouTube and F-14 Tomcat Facebook fan pages, have shown the younger crowd who were not there in person what Snort’s flying achievements looked like in the jet.

Undoubtedly, the most famous photo is of Dale’s opening banana pass from the flight deck of the USS America aircraft carrier flight demonstration. In the foreground is the Commander of the Air Wing Jay Johnson, who later became Chief of Naval Operations (CNO), casually watching with his hands behind his back. The huge barreling Tomcat screams by in a right-hand knife-edge pass so close to the ship people think the picture was photoshopped. In reality, it was a well-practiced maneuver with specific airspeed, altitude, and angle of bank performance metrics briefed before the flight and debriefed after.

But beyond the awe of this photo is a snapshot in time that displays a real-world example of how naval aviation and naval aviators operate: controlled and calculated risk-takers who are the best in the world at what they do.

Snort loved naval aviation and considered 1 v 1 air combat with guns only as “the pinnacle of flying an airplane”. During close air combat, “it was who can fly the best jet,” or more accurately, “who can cheat the best” he coyly mentioned. But even the most accomplished of aviators realize flying onboard the aircraft carrier at night is what sets naval aviation apart from its aviation peers. Super pilot Snort was no different:

“Every one of those (night traps) I still get sweaty palms”, Snort remarked. Yes, Snort, we all do too (even us RIOs).

The list of Snort's career accomplishments is long. First nugget pilot selected for training in the F-14 Tomcat along with the most hours in the F-14 Tomcat for a pilot. A TOPGUN graduate and US Navy Fighter Pilot of the Year in 1985, plus a tour as Commanding Officer of VF-33 during Operation Desert Storm leading combat missions into Iraq. He rounded out his active duty career as Commander Fighter Wing Atlantic where he spearheaded adding precision strike capability for all Tomcats. In retirement, he would go on to fly some of the world's most legendary aircraft on the air show circuit and was a founding member and pilot for commercial adversary services provider Draken International. But Snort stands above everyone else in one area: King of the Airshow circuit in the F-14 Tomcat.

There are no demos like a Snort demo. Period.

Imagine the Tomcat positioned at the end of the runway, nose dipped down like it is ready to prowl on some unsuspecting airshow observer. As Snort begins the takeoff roll, he lights the afterburners and rumbles past show center at 150 knots. With the nose gear still on the ground, Snort yanks the jet up and right, into a dirty wing over, and then inverted, the Tomcats afterburners spewing decibels towards the crowd. Women and children cover their ears. Grown men blush. Naval Aviators stick their chest out. Everyone knows they are about to witness something special.

A thousand years from now, we will still talk about Snort and his legendary Tomcat performances.

As a member of the final Tomcat Demo team back in 2004, we would meet Snort in various airshows across the country. As the new guys, it was a little intimidating to be around this old salty Tomcat naval aviator. But Snort was always welcoming to us and his best advice after the airshow brief was always to “have fun.” In my mind, he wanted to trade spots with us, but instead, made up the difference in other ways.

At one airshow, I specifically remember sitting at the hold short watching Snort perform ahead of us in his F-86 Sabre. As he passed by us, the space between the ground and his wingtip could be measured in inches, not feet. I told my demo pilot, the balding Rocco Tangredi, that Snort could give him a haircut if we could just figure out how to attach clippers to the end of the F-86’s wing!

We don’t make them that way anymore. Not because someone else can’t accomplish the same legendary airworthy things Snort did with a newer and more capable jet, but because of the place and time in which the folks like Snort flew and lived. It was a culture of swagger, exuded from the youngest maintainer to the saltiest of aircrew, brought on by the sexiest of fighter jets. Some refer to it as catching lightning in a bottle. One man was able to do just that. Cheers to you Snort—thank you for bringing us along.

Joe "Smokin" Ruzicka was a Radar Intercept Officer in the F-14 Tomcat and Weapon Systems Officer in the F/A-18 Hornet with over 2,000 flight hours in fast jets. Joe was also a part of the final F-14 demonstration aircrew, as well as being a Legislative Fellow to John McCain and worked in Washington DC on critical US Navy programs on behalf of the US Navy. His prior works are a must-read. You can find them here, here, and here. You can follow Joe on Twitter at @smokinjoe96.

Ward Carroll recalls battling Floggers and Fishbeds over Nevada and the shroud of secrecy surrounding their remote base.

We reminisce about Grumman’s big swing-wing jet that became as much a pop culture star as a weapon of war with a Navy pilot who knew it well.