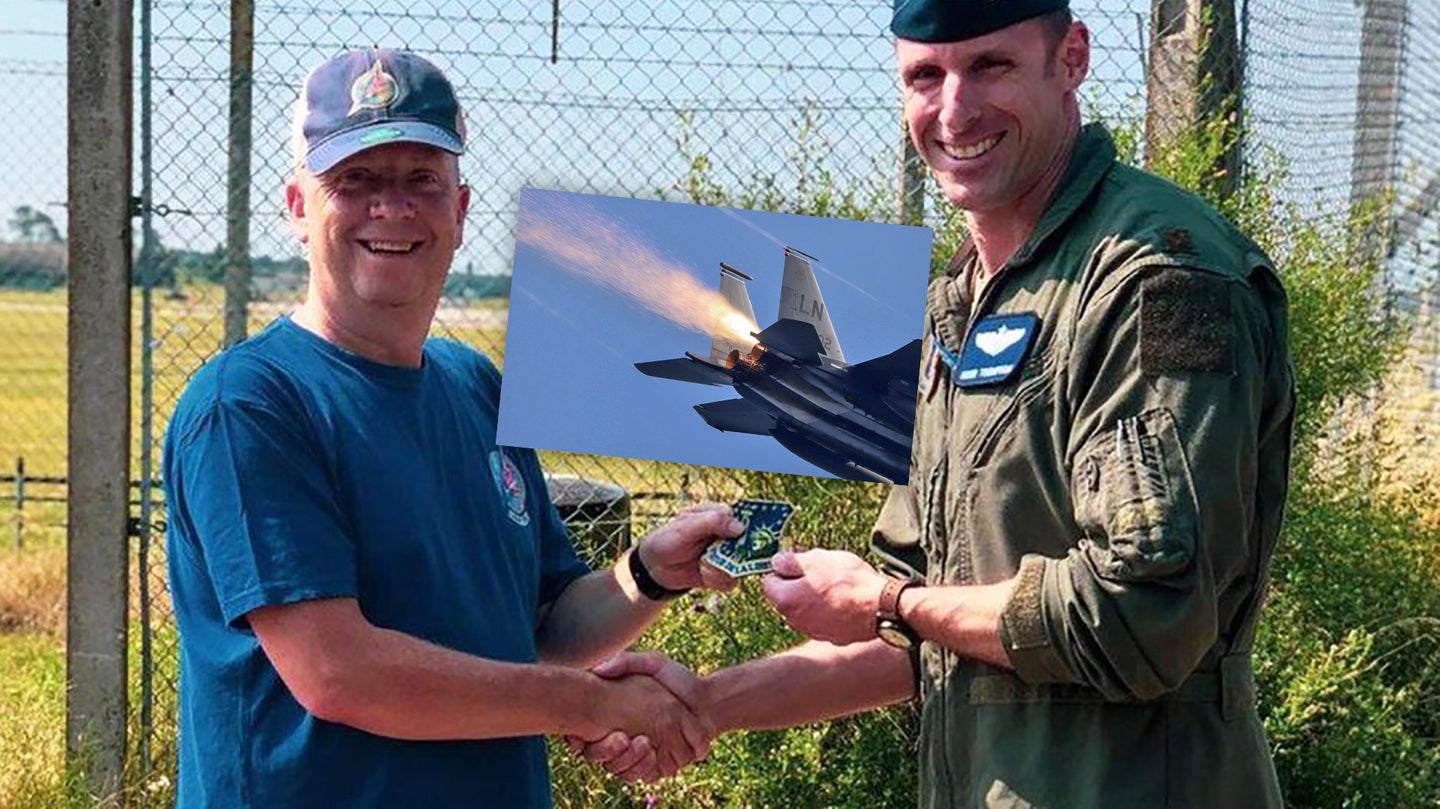 The pilot of the U.S. Air Force F-15E Strike Eagle whose jet was captured spewing sparks on takeoff from RAF Lakenheath in England, earlier this month, has offered his thanks to the plane spotter who alerted the base to the malfunction. The original incident, which The War Zone was first to report on, was attributed to a fault with one of the engine nozzles.

According to a report from the BBC, it was plane spotter Ian Simpson who called the base after seeing that the jet was potentially in trouble. At the time, aviation photographer Matt Smart confirmed to us that someone had phoned the base to inform them and that, prior to then, even the pilots were unaware of what was happening.

Based on online flight tracking data available from ADS-B Exchange, the jet in question took off at approximately 9:02 AM local time and was heading out over the North Sea coast. On seeing the sparks streaming from the right-side Pratt & Whitney F100 turbofan, Simpson got through to the field operations group via the Lakenheath switchboard and the base then informed pilot, Major Grant Thompson.

Thompson himself told the BBC that he was “100%” sure that Simpson’s actions had saved his life. “His initiative was awesome,” the airman added.

Major Thompson confirmed he had no clue that anything was wrong with his jet, serial number 91-0302, assigned to the 492nd Fighter Squadron, the “Madhatters,” part of Lakenheath’s 48th Fighter Wing.

“From our perspective, it was a normal takeoff,” Thompson said. After getting the warning from Lakenheath, Thompson followed standard protocol and had his wingman approach close to the jet and take a close look at the engine nozzles, confirming the malfunction and prompting Thompson’s return to base.

Happily for Thompson, the sortie ended with no further drama, while Simpson, a long-term spotter at Lakenheath, was thanked in person during a meeting with the pilot earlier this week and even got some swag.

Lakenheath, in particular, has developed a good relationship with its very active spotter community, even going so far as to have them serve as unofficial intelligence-gathers, reporting suspicious behaviors around the base and online. It really should be a model of how to engage a community that shares a common passion and cares about the safety and wellbeing of those working at the base and flying from it in the air.

On this occasion, thanks to one of those spotters’ quick thinking, a potential catastrophe may well have been averted. Certainly well worth a trucker cap or two.