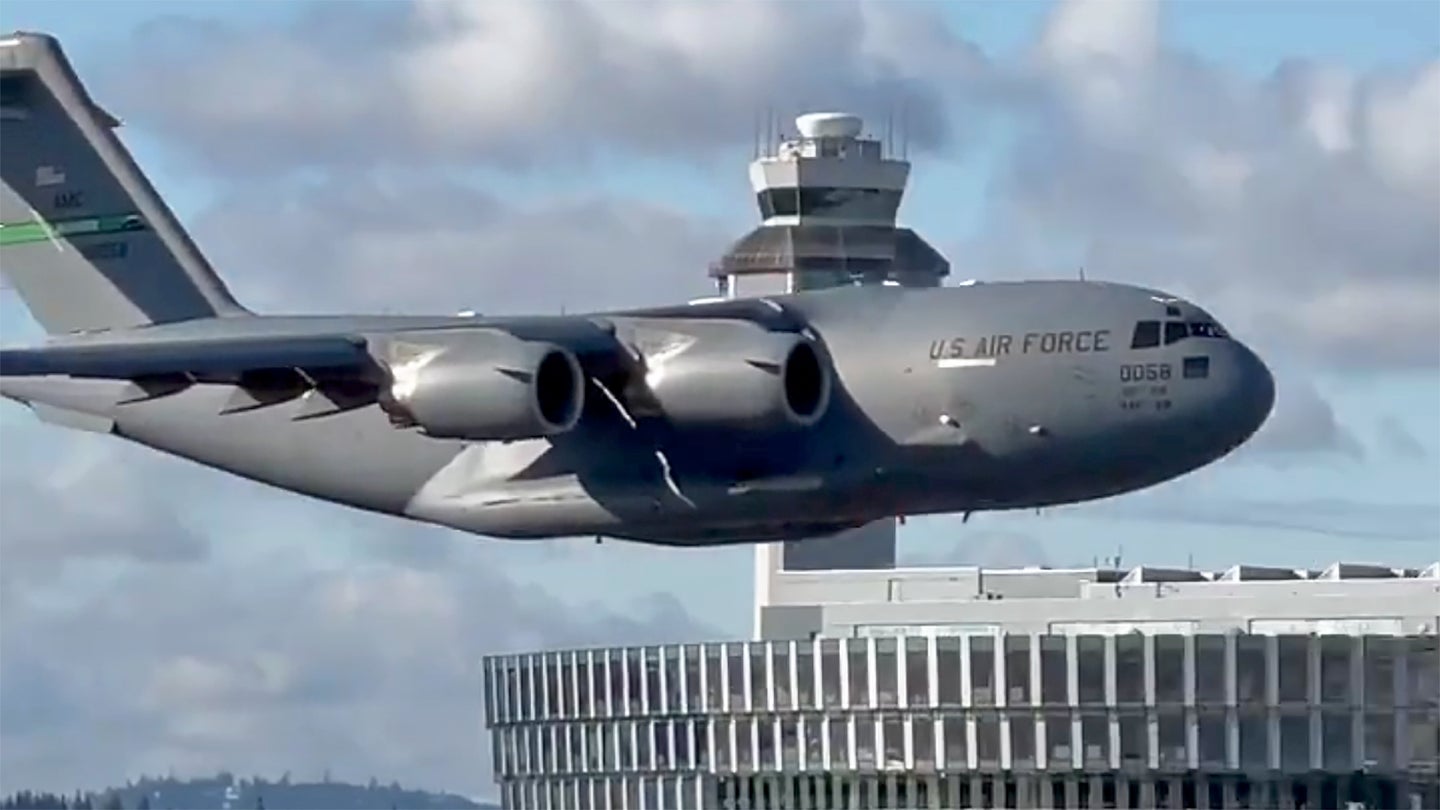 The C-17 is just about as visceral a manifestation of design tradeoffs between payload, speed, range, and short-field performance as one can imagine. The "Moose" is also the backbone of America's strategic airlift capabilities, with roughly 222 in service. With the production line shuttered for years, there won't likely be any more of them, either. Considering these big jets have to get in and out of airports, and even austere landing strips, surrounded by potentially hostile foes, minimizing exposure to enemy fire is key. Hence the use of short field 'tactical departures,' which appears, at least to our eyes, to be what a C-17 executed on Wednesday out of Portland International Airport.

The dramatic takeoff occurred at the beginning of a mission where it acted as prey for the 142nd Fighter Wing's F-15C/Ds that sit quick reaction alert.

Aviation photographer Sean Phillips, who goes by the handle @big_seans_aviation on Instagram, caught the non-standard departure off PDX's runway 28R on July 21. As you can see below, the McChord AFB-based C-17 makes an abrupt pull-up off the runway after a very short ground roll, before quickly leveling out. It then flies flat out down the runway at low level, rapidly gaining speed, and then enters into a steep climb at the end of the runway. The C-17 then levels out after climbing a couple of thousand feet into the air and proceeds to head out to be intercepted by the Eagles, according to Phillips.

Once again, it looks to us like we are seeing a short-field tactical departure-like maneuver here. As noted, such operations can be critical to the survival of the aircraft in war zones. In fact, they can also be useful here at home. Air Force One famously executed a very similar maneuver when leaving Sarasota Airport into the unknown on September 11th, 2001.

If anything, this awesome video is another reminder that the big C-17 is actually a remarkably nimble beast.

We have reached out to some of our C-17 friends for more information (see update at the bottom of the article!). Until then, enjoy these bonus clips of F-15s executing a training scramble to intercept the C-17:

Author's note: A huge thanks to our buddy Sean Phillips for sharing his videos with us. Make sure to follow him over on Instagram, there is some great stuff on his page!

The pilot told us all about the maneuver and flying with the F-15s on training sorties in this follow-up article.