The adaptable UH-1Y Venom is now playing a role in the Marine Corps’ pivot toward the anti-submarine warfare mission. 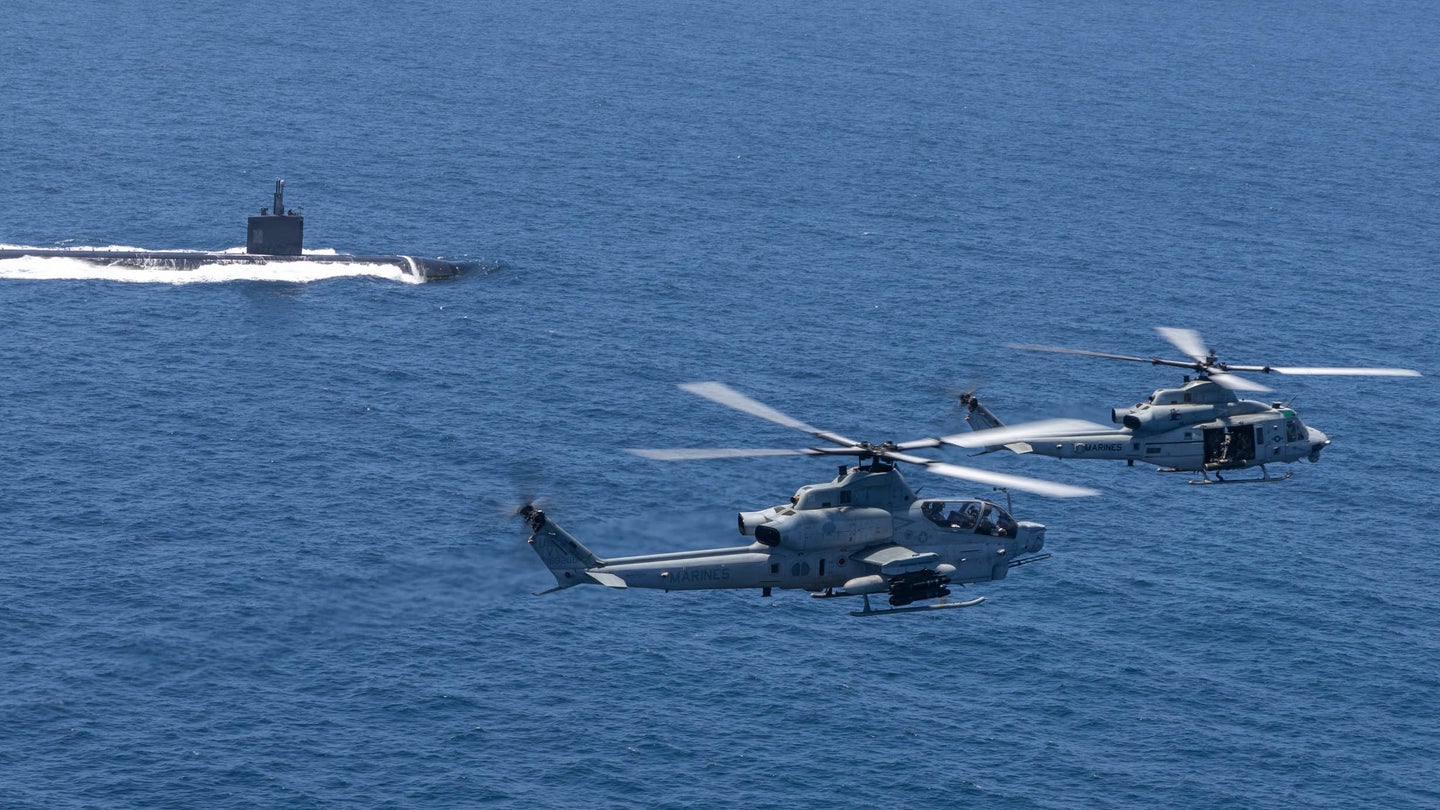 Utility helicopters from the U.S. Marine Corps have been conducting anti-submarine warfare maneuvers as part of the ongoing Summer Fury 21 exercise off the coast of southern California. UH-1Y Venoms from Marine Light Attack Helicopter Squadron 267 (HMLA-267) from nearby Marine Corps Base Camp Pendleton were seen dropping sonobuoys in what’s an unusual mission for this type, but which reflects a growing interest in anti-submarine operations within the Corps.

As well as 3rd MAW F/A-18C Hornets and F-35B Lighting IIs flying a long-range maritime strike against a simulated enemy warship, the UH-1Y was also seen in the context of offensive maritime operations, in this case, its crew members helping to prosecute a submarine contact by dropping sonobuoys by hand out of the cabin door.

Sonobuoys are expendable sonar devices that are used to fix the position of an opposing submarine and monitor its movements, something you can read about in more detail in this past War Zone piece. While sonobuoys are a regular feature of anti-submarine warfare operations and are dropped in significant quantities by specially-equipped fixed-wing aircraft and helicopters, they aren’t normally associated with the UH-1Y.

The UH-1Y, which has completely replaced the 1970s-vintage UH-1N within the Marine Light Attack Helicopter (HMLA) community, is potentially a useful tool for anti-submarine warfare work, being optimized for the maritime environment and also offering a useful speed of 170 knots, considerably faster than the old ‘November’ model.

With a mission repertoire that already encompasses offensive air support, assault support, escort, supporting arms coordination, and forward air controller — airborne, it’s maybe not such a surprise that the UH-1Y is also able to turn its hand to anti-submarine warfare, too, albeit apparently on what must be a fairly rudimentary basis.

After all, the UH-1Y has no actual submarine-hunting equipment on board, so its role is one of assisting in seeding sonobuoy screens, helping pinpoint the submarines, especially after initial detection or where they might enter particular choke points.

Since a single dedicated anti-submarine platform can only conduct its mission in one place at a time, any help in seeding sonobuoys across a wider area can serve as a significant force multiplier. A UH-1Y with sonobuoys dropped manually out of the door is also cheaper to operate than a specialized ASW asset and is also readily available.

This use of the UH-1Y fits in with the increasing emphasis placed by the Marines on this mission, traditionally the domain of the U.S. Navy. The service’s new-found interest in anti-submarine warfare is based on the shift toward distributed and expeditionary warfare operations, as part of the Expeditionary Advanced Base Operations (EABO) concept. Significantly, one of the stated focuses of Summer Fury 21 is defeating a peer adversary as part of distributed operations.

EABO calls for Marine units to quickly establish forward operating bases across a broad area and then use these as a springboard to launch various other missions, before moving on to the next area. This should make it harder for an enemy to counter the Marines but also lends itself ideally to the kinds of Asia-Pacific environments in which the U.S. might expect to go to war with China, for example, as well as in the Northern European context, around the coasts of Norway, Iceland, and Greenland.

One of the potential problems with EABO is that it is likely to rely upon logistics and other supporting operations by sea and with both China and Russia rapidly modernizing their underwater capabilities, these could be threatened. This is where a Marine anti-submarine warfare component fits in, although in practice any such effort is likely to be conducted in cooperation with the Navy.

Among the potential different ideas for how the Marines can embrace anti-submarine warfare are using unmanned aircraft to deploy sonobuoy arrays and other anti-submarine warfare sensors in the waters around an expeditionary outpost. Manned aircraft could equally play a part, too, with the Marines flying KC-130 Hercules tanker-transports and MV-22 Osprey tilt-rotors, as well as various helicopters, all of which could also contribute to dropping sonobuoys, in particular. The concept of turning existing platforms into sub-hunters is nothing new, in fact, with the Navy having explored adapting its carrier-based tactical aviation assets for just this role half a century ago.

Now, in Summer Fury 21, it seems at least a part of that Marine ambition has been fulfilled, with the delivery of sonobuoys from the UH-1Y.

A caption to one of the photos released explains the UH-1Y was involved in a concept described as Advanced Naval Basing, which is said to offer “forward logistics and support, as well as sensor and strike capabilities that make a significant contribution to undersea warfare campaigns in the Indo-Pacific region.”

Interestingly, back in 2016, the Marines came up with a wargaming “tool kit” that included a Navy SH/MH-60 Seahawk detachment flying from a Marine forward base on local anti-submarine operations, as well as anti-surface warfare and other missions.

While the UH-1Y doesn’t offer anything like the same full-spectrum anti-submarine capability in the role as the Seahawk, it’s possible that the Venom was being used as an adjunct to the Navy helicopter, an example of the MH-60R also being seen in the Summer Fury 21 photo release. Since the exercise also includes establishing a forward arming and refueling point (FARP), it’s also conceivable that these helicopters were flying their anti-submarine warfare missions from there, reflecting the proposal in the 2016 “tool kit.”

So far, however, it seems no other details have been released about the anti-submarine warfare portion of Summer Fury 21 and the particular role played by the UH-1Y. However, it seems clear that the Marines are at least now experimenting with using this platform as part of this mission.

However, as The War Zone has discussed in the past, there still remain significant hurdles before anti-submarine warfare can become anything approaching a core Marine Corps function. Despite the importance of defeating hostile submarines in modern warfare, this is a very particular skill set that requires intensive training and resources, including personnel, especially bearing in mind the number of other functions the service is expected to perform. With this in mind, assisting the Navy in these operations makes sense.

As it is, we will have to wait and see to what degree the Marines will embrace anti-submarine warfare as part of their evolving EABO doctrine and, within that, what kind of expanded role will be played by the adaptable UH-1Y.

The experiment was far ahead of its time in many ways and came in part as a result of the Navy looking to fit every mission onto its supercarriers.

Marines could find themselves searching for and attacking enemy submarines, as well as indirectly supporting other anti-submarine operations.