The Pentagon’s Strategic Capabilities Office, or SCO, is adding two more unmanned surface vessels, or USVs, to its secretive Ghost Fleet Overlord program, which it is running in conjunction with the U.S. Navy. In addition to the pair of new ships, SCO has announced that it will transfer the two existing USVs it has been testing to the Navy in January 2022.

The SCO’s Ghost Fleet Overlord program, which dates back to at least 2017, aims to rapidly field autonomous surface vessels in order to “better expand the reach of manned vessels,” according to the Pentagon. The project has been looking to develop ships that can not just travel from point A to point B on their own, but also follow the rules of the sea and avoid other ships autonomously. The announcement about the two new vessels comes amid many other recent developments signaling the Navy's increased emphasis on unmanned vessels.

“The intent is to utilize this time period to do fleet demonstration exercises and operational vignettes to continue to demonstrate in an operational context the utility of these vessels to augment manned combatant capabilities,” Luis Molina, SCO’s deputy director told reporters this week.

The SCO’s two existing large unmanned surface vessels (LUSVs) for the Ghost Fleet Overlord program, the Ranger and the Nomad, were converted from commercial fast supply vessels, which are typically used to support various offshore activities, such as work on oil platforms and around offshore wind farms. As such both of them feature large open spaces in the rear, originally intended to carry cargo, which can be readily reconfigured to accommodate different payloads.

Since October 2020, both of the USVs completed autonomous transits from the Gulf of Mexico to the West Coast of the United States, operating in human-controlled modes only when traversing the Panama Canal. The most recent voyage, carried out by the Nomad, saw the USV travel over 4,000 miles in June 2021 with 98% of the trip completed autonomously.

Now, the SCO is set to add two more similarly-sized autonomous ships to the program. Little is known about the new vessels, or their manufacturers. For security reasons, the SCO is not releasing the names of the firms developing its new unmanned surface vessels in light of recent security breaches among Navy contractors. “We are developing cutting-edge technologies for the future fight. We’re trying to protect those investments from being stolen by our adversaries,” Molina said this week. “As a result of that, we [SCO] do not normally provide the names of our industry teams.”

In order to control its growing fleet of unmanned assets, the Navy has been working with Raytheon in the development of a Common Control System (CCS), an effort designed to help unify future operations involving various autonomous platforms, such as the MQ-25A Stingray aerial tanker drone, submarine-launched Large Displacement Undersea Vehicles (LDUUVs) like the Snakehead, and other experimental USVs. The Navy is also planning to incorporate other existing unmanned platforms into the system in the future, such as the MQ-8 Fire Scout.

As part of its plan to develop new medium and large USVs, the Navy has requested $144.8 million for Fiscal Year 2022. The House Appropriation Committee, however, has proposed cutting $42 million from the program.

The SCO’s Ghost Fleet Overlord program will officially end in 2022, but the end date is more of a bureaucratic formality, as the same USV experimentation will continue under the control of the Navy with the turnover of the Ranger and the Nomad, according to the Navy. U.S. Navy Captain Pete Small, program manager for Naval Sea Systems Command’s (NAVSEA) Unmanned Maritime Systems program, told reporters that by the end of 2022, the first two vessels will have transitioned from SCO to the Navy and the two new Navy-funded Ghost Fleet Overlord prototypes will have been delivered. It's unclear if the second pair of ships will go to SCO or to the Navy directly.

In light of the rising and sometimes wasteful costs of maintaining a large fleet of large, manned ships, the Navy has been increasingly moving towards a future consisting of distributed fleets of lower-cost ships and unmanned platforms. As part of the effort, the Navy stood up Surface Development Squadron One (SURFDEVRON) in May 2019 in order to explore new tactics and procedures that involve unmanned surface vessels.

SURFDEVRON, which is based in San Diego, presently includes the Navy's two existing Medium Unmanned Surface Vessels, or MUSVs, the Sea Hunter and Seahawk. In an interesting parallel to the Ghost Fleet Overlord effort, Sea Hunter was originally developed as part of a project led by the Defense Advanced Research Projects Agency (DARPA), before being transferred to the Navy.

These drone ships both took part in the UxS IBP 21 experiment earlier this year, which featured a wide variety of other manned and unmanned assets, as well, as you read more about here. Naval Sea Systems Command officials also recently inquired about engineering and technical support for future electronic warfare and intelligence-gathering activities as part of that separate program.

Despite the investments into USV research and development, it remains unknown what exactly the concepts of operation surrounding these ships will look like down the road. It's possible that the current vessels are only technology demonstrators and that future platforms will have other capabilities besides those tested, including potentially weapon systems or electronic warfare suites.

There is also the potential for them to end as an expensive, but ultimately unproductive experiment that gets sidelined as the Navy's priorities, or those of the U.S. military, as a whole, change. Lawmakers have already expressed their skepticism about the Navy's plans for larger unmanned surface vessels, approving less than $94 million of the $464 million that the service has originally asked for to support its own Large Unmanned Surface Vessel (LUSV) program in the 2021 Fiscal Year. The Navy has previously defined the Ghost Fleet Overlords Ships as being in the LUSV size category.

Regardless, the recent successes of the Ghost Fleet Overlord program, coupled with the announcement of these two new USVs, signals that the Navy could be rapidly moving to a state in which unmanned vehicles operate alongside human counterparts in the skies, below the seas, and on the surface of the ocean all at once. Like a lot of projects that aim for major innovations, the questions remain: how expensive will it be, and when could it realistically happen?

A missile component, likely from Ukrainian air defenses, fell onto Moldovan territory after another massive Russian attack on Ukraine. 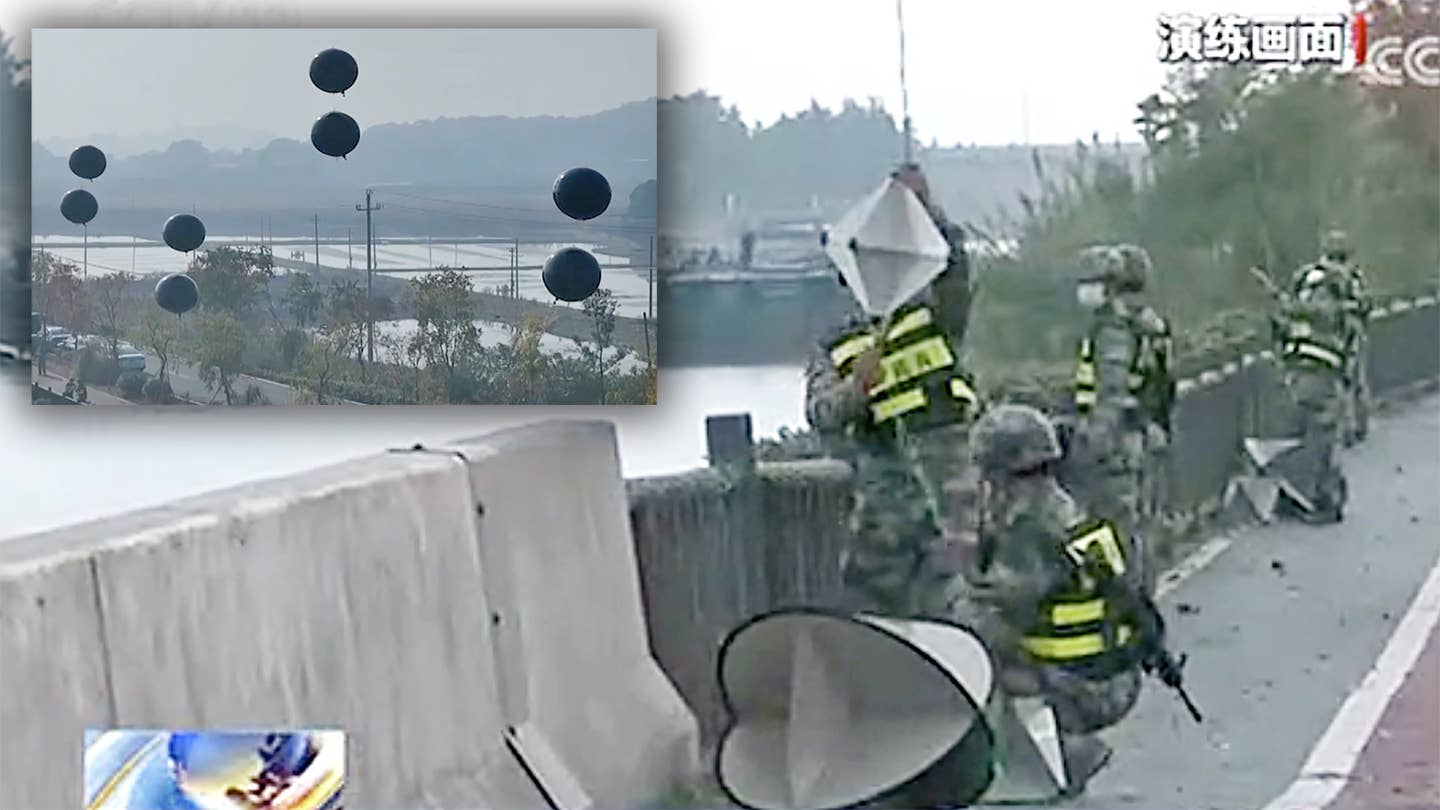 The balloons are meant to confuse sensors and weapons from surveilling and destroying key targets, but they may have another function, too.