The Navy's Optical Dazzling Interdictor, or ODIN, was photographed installed on the USS Stockdale during a replenishment in the Pacific. 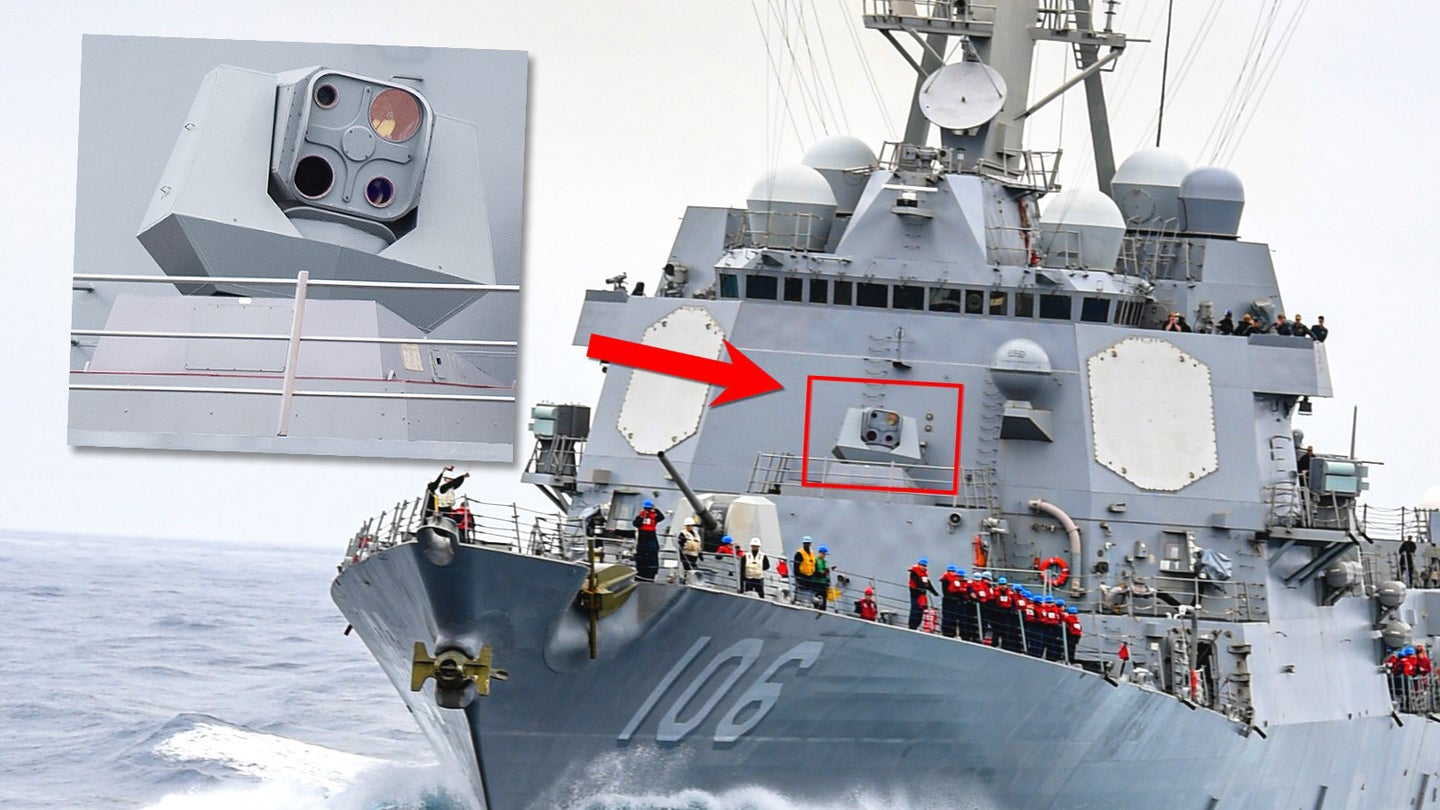 Images published by the U.S. Navy this week offer the most detailed look yet at the new Optical Dazzling Interdictor, or ODIN, in an operational setting. The directed energy weapon was seen aboard the USS Stockdale (DDG 106) Arleigh Burke-class guided-missile destroyer while it was conducting a replenishment-at-sea with the USS Carl Vinson (CVN-70) on July 12, 2021. ODIN is one of the Navy's premier directed energy weapons initiatives and according to these images and budget documentation, the dazzler may be approaching a largely operational status.

The images shared by the Navy show the turreted ODIN system installed on the Stockdale’s forward close-in weapon system pedestal. ODIN is a lower-power laser system designed to blind adversarial electro-optical and infrared sensors by projecting a “dazzler” laser beam at them. The Navy intends for ODIN to be capable of disrupting and countering sensor systems aboard a wide range of threats including those aboard surface vessels, aircraft and UAVs, and even some anti-ship missiles. The ODIN system also includes a high-power camera system that can be used for other applications beyond its primary role in targeting for the dazzler system. This gives the Arleigh Burke class an additional high-power optical sensor in addition to its already outstanding EO/IR suite.

The USS Stockdale is part of the Carl Vinson Carrier Strike Group (CSG-1), which was rushed to Hawaii in June amid drills carried out by Russia’s Pacific Fleet. The strike group is currently conducting routine training off of the West Coast as part of the U.S. 3rd Fleet.

The Navy has requested $9.5 million for ODIN in its FY 2022 budget documentation, down from $34 million in 2021. The Navy’s budget requests state that the decrease is due to the fact that “the majority of the procurement, assembly, checkout, integration, T&E, and installation of units 1-8 being either complete or in process,” noting that “Funding in FY22 is primarily for the Operation & Sustainment (O&S) of installed ODIN Units.”

In 2020, Frank Peterkin, the Senior Technologist for the Directed Energy at the Office of Naval Research (ONR), indicated ONR had plans to deploy ODIN systems aboard seven more Navy vessels by 2023. "We’ve been working hard for the last five to seven years to try to bring directed energy forward in a meaningful sense to the warfighter and the operational community while at the same time advancing the technology," Peterkin explained, adding that "We’re in a little bit of a golden age for collaboration now for directed energy.”

Chief of Naval Operations (CNO) Adm. Mike Gilday visited Naval Support Facility Dahlgren in Virginia in late 2020 to be briefed on directed energy programs including ODIN. “As we develop the Fleet of the future, it’s important that we invest in weapons that are more precise, have longer range, and give us the ability to make our ships more survivable,” Gilday said during the visit.  “The development and fielding of new technology like directed energy and high-velocity projectiles are not science fiction – they’re happening today.”

The appearance of the ODIN laser system aboard the USS Stockdale follows other brief glimpses of Navy directed energy weapons over the last few years. In October 2019, a mysterious object was shipped by Northrop Grumman from Redondo Beach, California to San Diego, which was later determined to be the Laser Weapon System Demonstrator (LWSD) tested aboard the USS Portland to shoot down a drone. Later in 2019, a turret which appears to have been an ODIN system was seen on the Arleigh Burke-class destroyer USS Dewey (DDG-105) in 2019.

These latest images of ODIN point to several lines in the Navy's most recent budget requests which state that seven units are now in operational status with one more in the testing and certification phase. ODIN is already installed aboard three Arleigh Burke-class guided-missile destroyers, and two more are expected to be installed in 2021. The remaining three will be installed over the next few years.

Naval leadership plans to add directed energy capabilities to a wider range of vessels including Littoral Combat Ships, and potentially including aircraft carriers according to statements made by the ONR. ODIN is something of a first step in a number of increasingly capable and lethal laser systems that will be fielded over the decade. Some, like HELIOS, combine low-power dazzling with higher-power, more destructive laser capabilities, as well.

So, expect to see more U.S. Navy ships armed with lasers in the near future, with ODIN being just one of the systems developed to offer a number of varying capabilities.