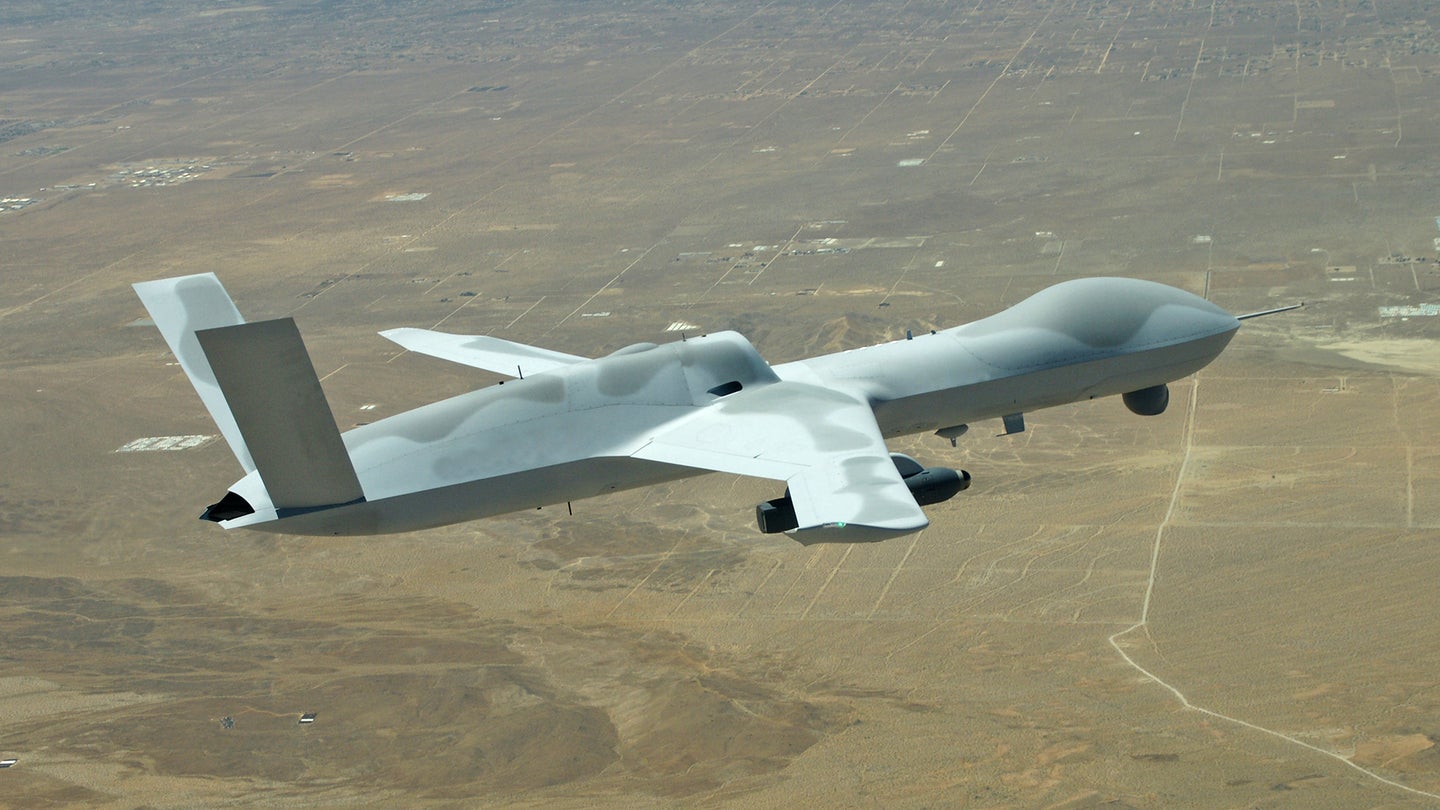 A U.S. Air Force’s latest large force test event has once again pushed the boundaries of modern aerial warfare, leveraging long-range “kill web” technology and integration of an autonomous drone. A test pilot at the center of the work told The War Zone how ranges in the east and west of the United States came together to prove-out data link fusion, while the Air Force’s Skyborg program gave an early, but important, demonstration of how it can operate safely and effectively in complex aerial battlespace.

“This was another test event as part of a series that is focused on kill web integration, event survivability and — new for this iteration — two new focus areas: autonomy integration and very long range kill chain integration in that we actually linked up the respective four-hour Orange and Emerald Flag VULs [Vulnerability Periods] for about an hour via a system under test,” Major Brandon “Siphon” Burfeind, the Orange Flag Director, told The War Zone during an exclusive interview.

Orange Flag 21-2 hosted by the Air Force Test Center’s 412th Test Wing at Edwards Air Force Base, California, on June 24, 2021, linked-up with its sister Emerald Flag event at Eglin AFB, in Florida, over 2,000 miles away. The combination was designed to prove long-range data linking and targeting capabilities. In addition, the Air Force Vanguard program Skyborg was included in the action, flying aboard a General Atomics Avenger as part of Orange Flag over the California desert.

Explaining more about the long-range link-up, Burfiend added: “It’s a U.S. Army long-range fires capability and network they use to connect various components that was able to connect the two VULs. Bottom line is we had a Link 16 data link picture spread across both Orange and Emerald Flag.”

“That single LInk 16 picture means that somebody flying in the Eglin range, if they can zoom out far enough on their display, could see the entire fight happening in the southwestern United States, and if they had a weapon, they could target off of that information. Let’s be clear, long-range Link-16 is nothing new, but doing it across the Army network is new. These were Army tracks that were then converted to Link 16, so the highlight here is the Integrated Fire Control Network.”

Orange Flag 21-2 aimed to provide a large force, multi-domain test environment for the autonomy participants.” The USAF confirmed that it had flown the Skyborg Autonomy Core System aboard a General Atomics MQ-20 Avenger unmanned vehicle during the event. You can read more about Skyborg’s involvement and its coupling with Avenger here. “As the nation’s premier, large force, multi-domain test event, it is critical that we provide the opportunity to test emerging technologies, including autonomy,” said Major Burfeind.

The geographically separated combination of the R-2508 range complex in California near Edwards AFB, and the Eglin Gulf Test and Training Range over the Gulf of Mexico for the respective Orange and Emerald Flags was significant. It included testing related to preparation for Project Convergence, the U.S. Army’s contribution to Joint All Domain Command and Control (JADC2).

The Program Executive Office Missiles and Space’s Tactical Systems Integration Lab utilized the Integrated Battle Command System to provide dispersed infrastructure, and this enabled long-range connections between geographically separated large force test events.” You can read all about the Integrated Battle Command System in this past War Zone feature.

Emerald Flag is a quarterly event designed to support the rapid experimentation of multi-domain kill web technologies, and it is hosted by the 96th Test Wing at Eglin. Orange Flag is conducted three times annually by the 412th Test Wing. These advanced kill webs are ultimately designed to support mission commanders and assist them with rapidly identifying and selecting options for taskings and to bring effects to bear on targets, bringing together multiple sensors, effectors (everything from missiles to lasers), and support elements across air, land, space, surface, subsurface, and cyber domains and across the different military services.

Orange Flag, Emerald Flag, and Black Flag are being combined on an increasing level to work in concert and provide robust environments to assist the advance of the Joint All-Domain Operations and the National Defense Strategy. This supports the testing of JADC2 and the Advanced Battle Management System (ABMS) to validate new tactics and technologies. The exercises’ are designed to stress systems through combat-relevant testing early in their development cycle.

“This isn’t the first time we have linked the R-2508 and Gulf of Mexico range complexes,” Burfeind explained. “However, we like to make the distinction between linking test infrastructure [such as distributed test operations at different locations] and linking a system that is under test. The former relates to control rooms, radios, telemetry streams, that kind of stuff — that's normal. What is new here is linking the system under test, which in this case is the Integrated Fire Control Network, across this long-range network between two large force test events.” While much of what was linked in this test could not be divulged, Burfeind commented: “This was about track information with varying degrees of quality, to include weapons quality.”

Explaining the relevance and importance of the linked testing, Burfeind says: “We are in the early stages of building the capability to undertake kill web integration, where there's kinetic control nodes in the Continental US and personnel at the battlespace edge who are sensing and stuff like that, and we are very concerned about latency. You need to be able to test that, and this gives us a venue where we can test the latency impacted error rate and target location error across long distances.”

Emerald Flag included air assets from the 40th Flight Test Squadron and the 85th Test and Evaluation Squadron. The USAF's brand-new F-15EX Eagle II also participated to stress its systems in this complex environment. “Being able to take the F-15EX with new software and new sensors and integrate it into a multi-domain atmosphere enabling kill chains is a win,” said Maj Ryan Stec, Emerald Flag air operations officer. “Through the planning and execution process, both developmental and operational tests learned valuable lessons to integrate more efficiently. We want this aircraft ready for the warfighter.”

Unrelated to the long-distance linked element of the two events, the addition of Skyborg was one of a range of individual participant objectives. “This was the first known testing of an unmanned vehicle operated autonomously in a large force test event,” said Maj Daniel Prudhomme, Orange Flag Operations Director. Skyborg was flown from the General Atomics facility at El Mirage, near Palmdale, in California. In addition, just about every fighter type in the US inventory, along with a single B-52H and a B-1B were also crammed into the R-2508 complex for the Orange Flag event — so it was a complex air picture.

“The big thing for us during our Orange Flag part from a test capability was autonomy,” said Burfeind. “We understand autonomy is a part of the Department of Defense roadmap for combat capability, so as a Test Flag enterprise we must make sure we are ready to force those programs to think about integration early on. Providing these programs opportunities to look at integration regardless of technical readiness level is incredibly important for future value to the warfighter.”

“This is a very early iteration of the Skyborg autonomy system, integrated on the MQ-20, and flying in a large force event. It was a success for us because of all the administrative hurdles that it takes to put an autonomous aircraft into an event line an Orange Flag — the team laid the groundwork to now start integrating autonomy early in the lifecycle of a large force event, and we are forcing these autonomy programs to show their cards on how well they integrate with other players, earlier and earlier in their technical readiness level.”

When it comes to testing actual autonomous behavior, Burfiend says things such as flying around in circles doesn’t require an Orange Flag. “There are certain autonomous things that do require large integration, then there’s the concept of we’re going to build this autonomous craft then it needs to work with everybody else — if it works in a vacuum it’s no use to anyone else. So Orange Flag is where developers — be that the Air Force Research Laboratory or industry — can come to showcase capabilities and ability to integrate. Forcing the developers to think about integration right now is huge and Orange Flag has been a driving voice. The same holds true for programs such as Golden Horde, programs like these are integrating with the traditional elements more and more.”

One of the most important nodes in the event was a U-2S “Dragon Lady” carrying its fifth gen-fifth gen communications gateway that enabled the various participants to communicate via Intra-Flight Data Link (IFDL) and Multi-Function Advanced Data Link (MADL), which allowed the F-22s and F-35s to join the army network. “As Orange Flag has evolved over the last three years, interoperability is still the main driver here,” said Maj Daniel “Beeper” Prudhomme, the Orange Flag Operations director. “We have multiple tactical data links in play and every domain being used. Interoperability is woven into about 80% of the objectives. There’s lots of sensors out there, various emitters, with targeting and shooting information across so many networks.”

Orange Flag is at the cutting edge of some of the most impressive emerging technology being fielded by the U.S. military. Linking up two big test events on opposite sides of the continent provided a unique ability to jointly execute long-range targeting, stress-test advanced new battle networks, and evolve major emerging capabilities for the USAF. Maturing and developing battle management technology and long-range kill webs are the linchpins to projects such as the emerging nuclear Long-Range Stand-Off (LRSO) missile for the B-52.

The next Orange Flag is scheduled for October 2021 and it will again occur in the R-2508 range complex, with further collaboration with Black Flag in the Nevada Test and Training Range suggesting an operational test slant for this iteration and more end-user focus.

The USAF says that in this iteration the material solutions will start to blur with the tactics to be employed, a fundamental step towards bringing these innovative warfighting technologies to fruition.