Poor tactics and a lack of defensive armament saw the Flying Fortress withdrawn from European bomber operations in 1941. 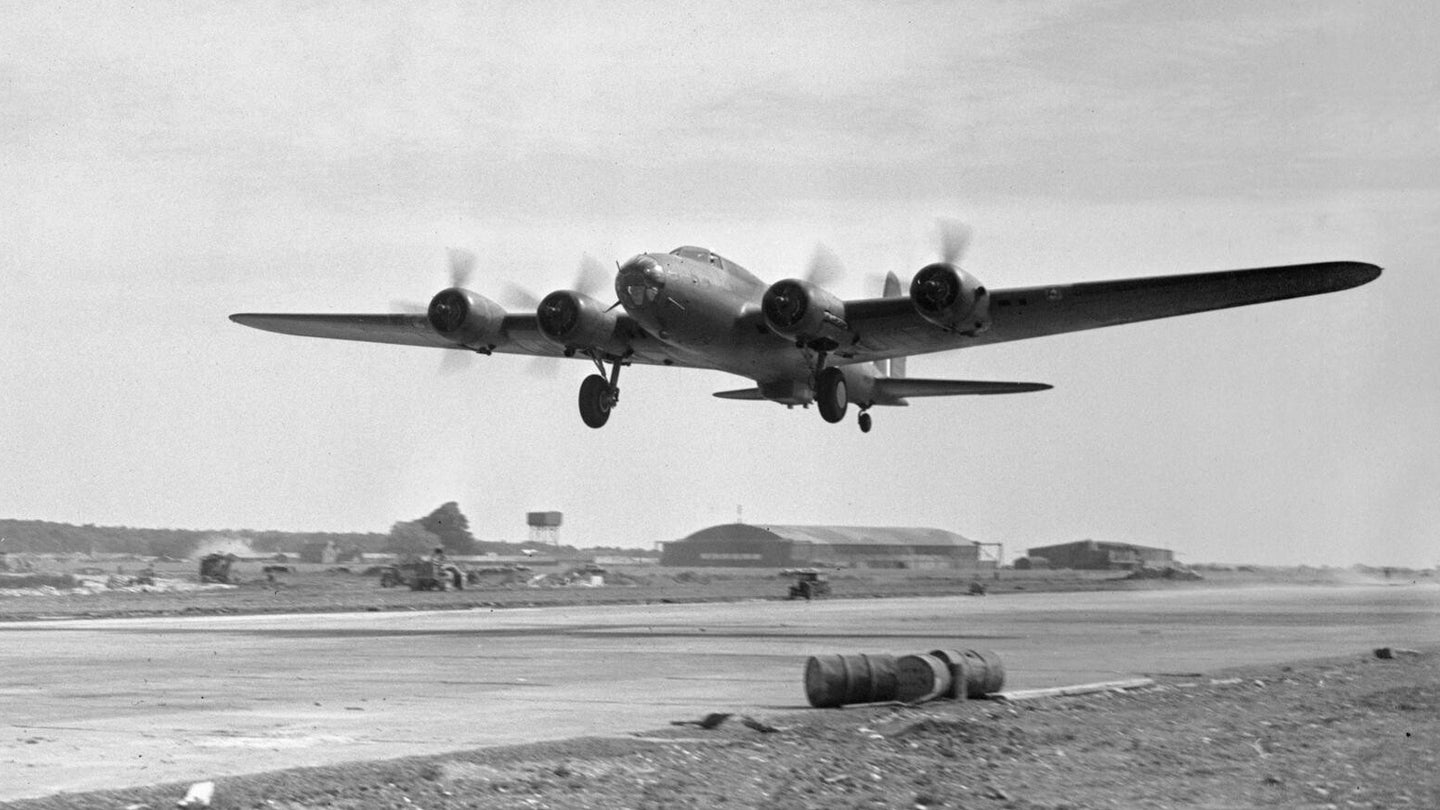 The iconic Boeing B-17 Flying Fortress, the aircraft best known for spearheading the U.S. Army Air Forces’ daylight bombing campaign in World War II, first flew into combat 80 years ago today. The bomber’s first operational mission was in British hands and, as the combat report reveals, it was an inauspicious debut. Nevertheless, the U.K. Royal Air Force’s early experiences with the B-17 in the European theater led to various improvements to the aircraft and its tactics and, when the U.S. Army returned the aircraft to action, it would be altogether more successful.

Although the B-17 had first flown in 1935, there had only been limited production of the aircraft before the December 1941 attack on Pearl Harbor and the United States’ entry into the war. However, by the spring of 1940, the United Kingdom had been stretched to capacity in its fight with Nazi Germany and the Royal Air Force (RAF) still didn’t have an in-service heavy bomber capable of carrying a significant payload into the Reich.

At this time, Boeing was building the B-17C model, which had a defensive armament of seven machine guns, a mix of .30 and .50 caliber types, including twin guns mounted in a “bathtub turret” below the fuselage. The definitive B-17G, by contrast, carried no fewer than 13 .50 caliber guns, but, for its time, the B-17C was considered well defended. Self-sealing fuel tanks and defensive armor added to the C-model’s survivability.

To help plug its bomber gap, the United Kingdom reached an agreement with the U.S. government in March 1940 to acquire 20 B-17Cs. In return, the British promised to provide the United States with detailed reports of how the bomber fared in combat. The aircraft, which the British designated as Fortress Mk Is, began to arrive in the United Kingdom in early 1941 and were assigned to No. 90 Squadron, based at West Raynham in the east of England.

By the time of the B-17’s combat debut, on July 9, 1941, the RAF's No. 90 Squadron had moved to an airfield at nearby Polebrook. Their first target was Wilhelmshaven, on the German coast, home to an extensive base belonging to the Kriegsmarine, or German Navy, in what the British media at the time described as a “stratosphere raid,” due to the high altitude at which it was flown.

The daylight raid was to be flown by three aircraft — referred to as C, G, and H — which would take off at 3:00 PM to attack their primary target of Wilhelmshaven from high altitude.

The squadron’s official account of the mission explains what happened next:

Bombs ‘hanging up’ referred to the weapons remaining suspended in the weapons bay, meaning they would have to be carried back to base.

Two bursts were observed on the target and a stick of four bombs was seen with the first bomb 250 yards west of the Bauhafen [the harbor where warships were constructed] and the others at 150-yard intervals to the southeast. Electrical failure of both cameras prevented photographs from being taken.

There was more trouble to come, however, when the Plexiglas “astrodome,” used for celestial navigation, froze up in aircraft G at an altitude of 18,000 feet. The official report says that “fire control” was made “impossible,” as a result, though it’s not clear exactly how the navigation-focused astrodome’s functionality factored into this.

With that in mind, this bomber, in particular, seems to have had a lucky escape, since two enemy aircraft, believed to be Luftwaffe Messerschmitt Bf 109 fighters were spotted around 2,000 feet below the Fortresses, close to the German-occupied Dutch island of Terschelling.

[The fighters] climbed and approached on the starboard beam closing to about 600-800 yards when one of them appeared to go into an involuntary spin and was seen still spinning about 600 feet below. The second aircraft broke off the attack and followed the first one down. No fire was exchanged.

As for the third Fortress, aircraft H, it also experienced a technical problem, when it began to lose oil at 28,000 feet and abandoned the primary target, and instead headed for another North Sea island, Nordeney, where it dropped four 1,100-pound bombs from this same height at 4:45 PM. “Bursts were seen on the sand about 500 yards from the town,” but photographs taken of the island failed to show any damage.

Aircraft H’s woes were not quite over, however, the combat report explains:

Lateral flutter due to oil freezing on the tailplane and building up to about 7 inches thick, and consequent vibration was experienced after bombing. This was eventually overcome by losing height to 15,000 feet at which height the oil thawed and cleared the tailplane. All four airscrews [propellers] were feathered in succession, but this had no apparent effect non the vibration.

Despite the ill-starred combat debut, the squadron launched another mission before the end of the month, with another three aircraft flying all the way to Berlin on July 23. Their planned high-altitude attack was frustrated by heavy cloud cover, as well as a thunderstorm and the aircraft were forced to return to base without dropping their bombs.

A total of 26 RAF Fortress raids were launched by September 1941, involving 51 individual aircraft sorties, but half of them were aborted, with no weapons delivered. As well as the problems experienced on the first mission, the aircrew encountered problems with the Sperry bombsight and with their defensive guns freezing up. Seven aircraft were lost.

The RAF’s initial experience of the Fortress was not a happy one, but the aircraft had, importantly, shown that it had the range to strike the German capital. The British soon decided that the B-17 was not the aircraft for the job of flying daytime bombing missions over Europe, but this had more to do with their own tactics than any major shortcoming in the aircraft itself.

The Royal Air Force’s tactics called for the bombers to operate individually or in small groups, instead of the huge formations of aircraft providing mutual defensive fire, as proposed by the U.S. Army Air Forces (USAAF).

The higher altitudes involved in the RAF bombing missions were intended to improve survivability but actually failed to evade the Luftwaffe’s fighters. The high-level sorties also reduced accuracy, especially since the Sperry bombsight was inferior compared to the more sophisticated Norden system used in U.S. bombers. Flying higher also meant the aircraft — and crews — suffered in the extreme cold.

The British subsequently tried out the Fortress in combat in North Africa, briefly, then switched the aircraft over to the long-range anti-submarine patrol mission, a role in which it was much more successful. Other examples were used for what was, at that time, termed radio countermeasures work, helping pioneer aerial electronic warfare jamming against the German air defense network, but their tenure as bombers over Europe had, for the time being, come to an end.

In the meantime, however, Boeing had been working to improve the bomber’s basic design, as well as its survivability against fighter opposition. Powered turrets were now added, each with two .50 caliber machine guns, behind the cockpit and in the bottom of the fuselage, plus a barbette in the tail with another pair of .50 caliber guns.

In this upgraded B-17E form, the Flying Fortress returned to combat in the European theater, with the USAAF, on August 17, 1942, as the United States built up its strength in the war against Germany. On that day, a formation of a dozen of these bombers attacked a railroad marshaling road at Rouen, northern France, without loss. The raid had been launched from Polebrook in England, the same base from where the B-17 had first gone into combat a little more than a year before.

The subsequent success of the B-17 in the Eighth Air Force’s daylight precision bombing campaign is well known and, within the space of a year, the USAAF had over 300 B-17s stationed in England. By spring 1944, the Eighth Air Force’s Flying Fortresses were marauding as far as Berlin, with fighter escort, demonstrating the ultimate ascendancy of the bomber offensive against a beleaguered Luftwaffe.

So successful, in fact, was the B-17’s later career, that it’s little wonder that the type’s unfortunate combat debut is now barely remembered.

On the type’s 85th birthday, we celebrate the little-known and short-lived U.S. Navy Spitfire unit that fought a different kind of war over Normandy.