The three-decade-old submarine appears to have received a big addition to its sonar system during a protracted refit. 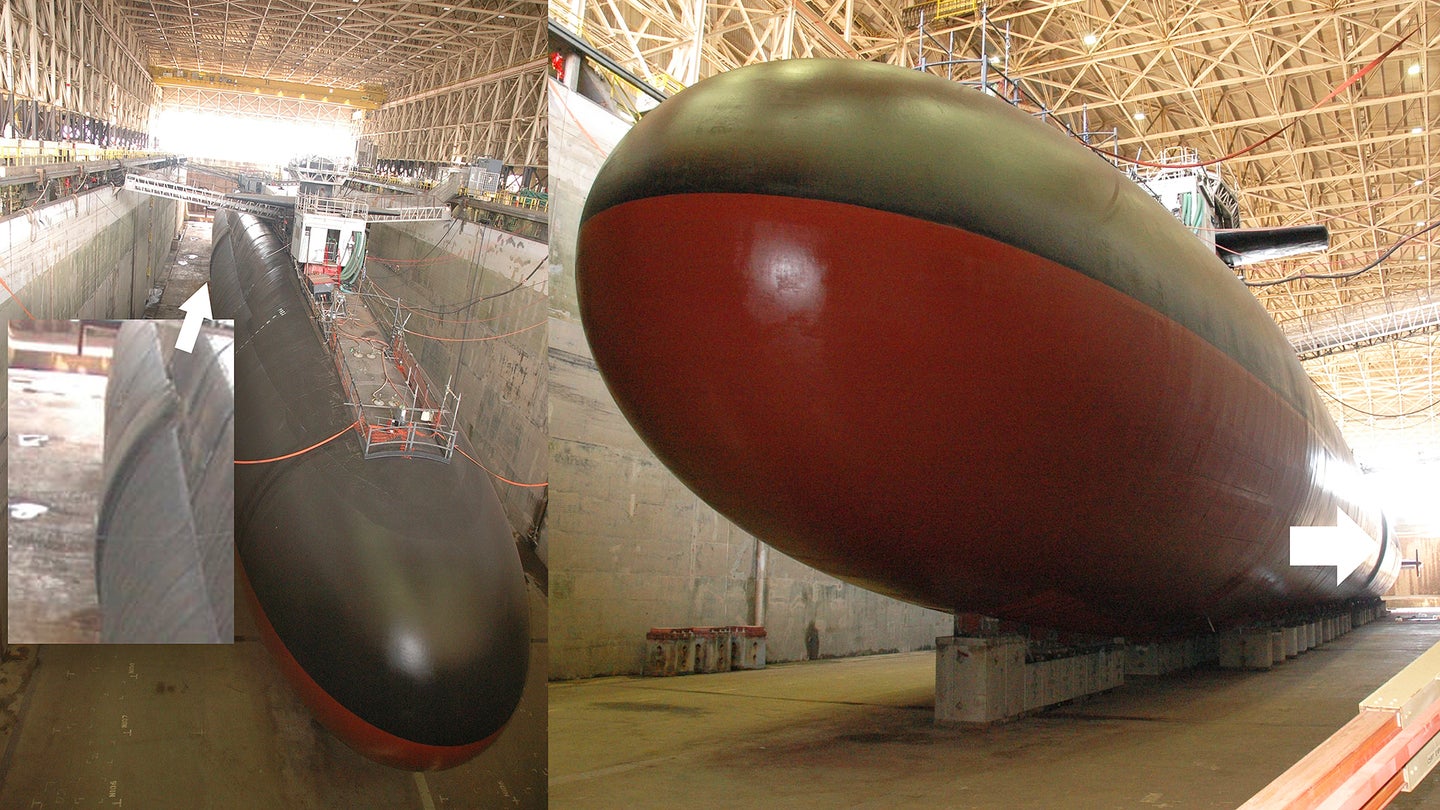 On July 7th, 2021, the U.S. Navy's Trident Refit Facility, or TRF, in Kings Bay, Georgia, posted some great images of a very refreshed USS Tennessee, also known by its hull number SSBN-734, wrapping up a major refit—one that the facility says is the longest and most extensive work package it has executed in its history. Multiple images show this Ohio class nuclear ballistic missile submarine, or SSBN, at the end of her dry dock period, looking in fantastic shape, which is a testament to the TRF's work—the sub has been in service for 33 years. Yet if you look closely, it is clear that there is a puzzling new addition to the 'boomer's' trademark long and sleek hull.

In a message on TRF's Facebook page, the facility touted the occasion to go along with a set of photos showing off the reinvigorated submarine—the 9th of the Ohio class boats and one of 14 that comprise America's second-strike nuclear deterrent. The post reads:

USS Tennessee Completes Historic Dry Dock Phase: USS Tennessee (SSBN 734) – undergoing the longest and most extensive work package in TRF-KB history – completed its dry dock maintenance period July 1 … A full 10 days ahead of schedule! Tennessee will be the last submarine in the dry dock for the next 15-months as the dry dock undergoes an extensive $592 million overhaul. Highlights of the Tennessee Extended Refit Period (ERP) include:

• Major upgrades to include Ship Control System and sonar array

• Removed and reinstalled more than 220K pounds of lead

And much, much more!

All of the USS Tennessee dry dock work was completed through careful planning and close coordination with Naval Facilities Engineering Systems Command (NAVFAC) to prepare and turnover the dry dock and surrounding areas for the Dry Dock Recapitalization Project.

If you look closely at the images, you will notice there is now a bulge that wraps vertically around each side of Tenessee's hull, midway down the boat's length. The bulges appear to end when they reach near the bottom of the hull and do not connect together. There is even a cutout in the upper fairing that sits flush with the launch tube doors for where the bulge begins before dropping below the waterline.

This feature does not exist on other Ohio class boats, as far as we can tell, and appears to be one of a number of enhancements that will see these absolutely critical assets through until their replacements, the Columbia class ballistic missile submarines, become available. Although the date could and likely will move, the Navy doesn't expect the first of these new American SSBNs to be ready until 2030, at the earliest.

As to what this new feature is, we cannot say for certain, but it does appear very similar to the conformal, or flank, sonar arrays found on some modern submarines. In fact, the blended bulges look similar to the flank arrays on the Virginia class, with one huge difference—they are oriented vertically in a continuous strip, not horizontally and made up of multiple arrays. For instance, the Virginia class has six of them that line the hull from the sail to the stern.

This odd arrangement could represent a new technological evolution, with this passive array working in concert with the main bow sonar array and the towed array to provide enhanced detection and tracking capabilities. This would also fit with the statement from the TRF that the boat's sonar system has been upgraded. We know there has been a big push to develop more reliable and economical flank array systems. It is quite possible that this could be our first glance at a new configuration that leverages these improvements.

It's also possible that this intriguing addition could be something else entirely, maybe having to do with ballast, but that would seem less likely.

After our initial analysis, we reached out to veteran submariner Aaron Amick, proprietor of Sub Brief, and an occasional contributor to The War Zone, about what he thought he was seeing in the images. Here is his take:

The photos show a bulge near the midpoint of the missile compartment of USS Tennessee. The bulge is symmetrical on both port and starboard sides covered topside by the missile battery fairing suggesting that is one complete piece crossing the top of the submarine. While it is not clear what function this addition provides the submarine, its appearance is similar to synthetic aperture sonar arrays used on other submarines.

The location is ideal for near 360-degree sonar coverage reducing the sonar ‘blind spot’ in the baffles, the region aft of the submarine. If this is a sonar array, it can provide two major benefits to the USS Tennessee. Based on the size of the array, this is most likely a Medium to High-Frequency passive sonar array. This gives the sonar operators another set of data to examine increasing their situational awareness across the broadband and narrowband sonar spectrums. This means USS Tennessee has increased detection capability.

The second benefit of the array position is the data can be digitally merged in the advanced beamformer processors with the bow-mounted sonar and towed array, increasing the directivity of the sonar system. This gives sonar more accurate bearings at very low frequency.

The potential combination of near-360 sonar coverage and increased VLF bearing accuracy gives USS Tennessee a tactical advantage we’ve not enjoyed since the Cold War.

Regardless, the fact that the Ohio class SSBNs—the most destructive weapons on Earth—are getting entirely new hull features as they enter into the twilight of their service life is a reminder of just how valuable and adaptable these boats truly are.

What do you think? Are we seeing a new conformal array or something else? Let us know in the comments below.

We can now confirm that this is indeed a conformal sonar array. @lfx160219 posted some PowerPoint slides about this exact system called the Large Vertical Array that is being installed SSBNs, the first being Tennessee, along with some other acoustic enhancements under the Acoustic Superiority Program. The Virginia class boats will be getting a similar array.