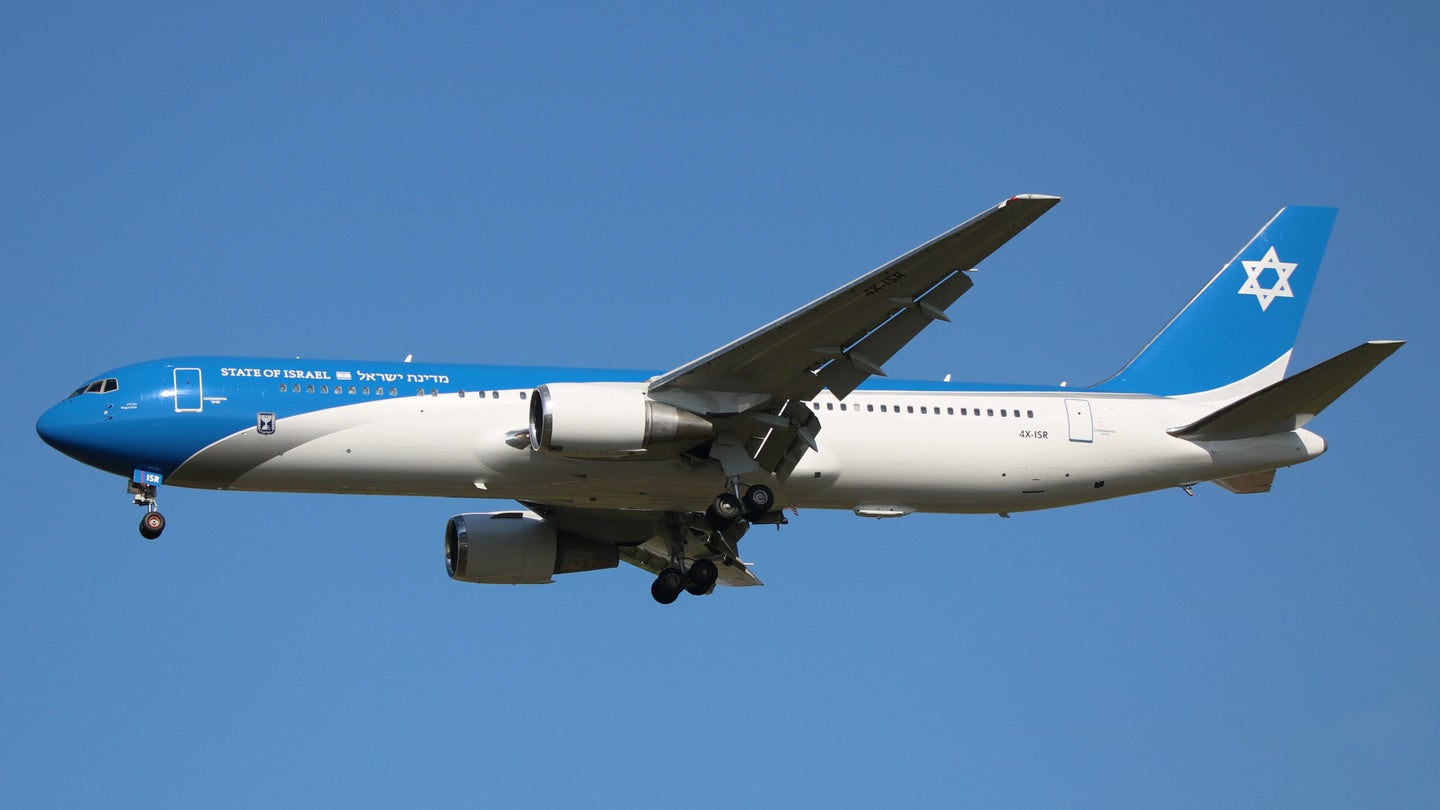 Before it has even entered service, Israel’s “Air Force One” could be abandoned, and the adapted Boeing 767 airframe sold off. That, at least, is the plan of at least one prominent Israeli lawmaker, although the proposal will likely face opposition from the Israeli Ministry of Defense, which wants the jet to transport the prime minister, president, and other high-ranking officials. So far, the country has invested over $300 million in the aircraft, roughly double the figure originally projected.

Israeli news website Ynet reports that Israel’s Deputy Prime Minister and Foreign Minister Yair Lapid is trying to sell off the 767-300ER twinjet, which was acquired secondhand and arrived in Israel in July 2016 after having served with the Australian airline Qantas, which received it in 2000.

The aircraft, officially named the “Wing of Zion,” has not yet entered Israeli Air Force service and has been undergoing extensive modifications in the country. Work is being undertaken by Israeli Aerospace Industries (IAI), including installing a conference room and seating for an entourage of 116.

Lapid is a long-term opponent of the VIP jet, announcing back in October 2019, before taking his current position, that he planned to scrap it. “When we are in government, we will sell it and transfer the money to where it really is needed,” Lapid said at the time.

A decision on the fate of the 767 will now have to be taken by Prime Minister Naftali Bennett, who began his tenure last month, together with President Isaac Herzog, who took office today. Herzog’s predecessor, Reuben Rivlin, stated that he would not fly in the Wing of Zion and would instead travel on regular commercial flights, although with the 767 yet to enter service, this was 'academic.'

According to Ynet, “the defense establishment strongly opposes the sale of the aircraft and recommends using it,” on the basis that the prime minister requires an aircraft with a comprehensive self-protection suite, hardening against cyber-attack, and secure communications equipment, of the kinds not available on a standard commercial airliner. It’s worth noting, however, that anti-missile systems are a standard fit on certain Israeli-operated commercial airliners too.

The communications suite is expected to allow the Israeli leadership to securely manage state affairs while airborne or on the ground, much like the U.S. Air Force’s own VC-25A Air Force One jets.

On the other hand, the fact that these types of systems have begun to be installed could complicate the process of selling the aircraft on the commercial market, especially to a foreign customer.

In the meantime, aside from the contentious issue of cost, the 767 is still some way away from actually being ready for service. The delays, amounting to several months, are reportedly due to “licensing proceedings,” as well as the requirement to build a dedicated new operating area at Ben-Gurion International Airport, outside Tel Aviv, where the jet will be based.

Furthermore, the process of getting the 767 into service was held up by a decision to suspend test flights last summer, in order to focus instead on the COVID-19 pandemic, although testing has now resumed. Even before that, there were other setbacks in the program, including a brake malfunction on landing in October 2019, reported in AirForces Monthly.

Last November it was reported that the 767 would be used by then Prime Minister Benjamin Netanyahu for his trip to the United Arab Emirates, but the jet was still not ready.

The choice of the 767 for the Wing of Zion has also been criticized. Since this aircraft is not operated by Israeli flag-carrier El Al, it requires specific infrastructure and support equipment, as well as aircrew training. First flown 20 years ago, the individual airframe selected is also fairly old. In some respects, the potential pitfalls of acquiring secondhand airliners for the state VIP transport mission have been made clear by the U.S. Air Force’s new VC-25B Air Force One jets, which are being converted from existing 747-8i airframes, not built to their unique specifications off the line. Still, those were new airframes put into storage, while the Wing of Zion has had an operational career.

The question of whether an air force needs a dedicated long-range VIP transport for state missions is a contentious one in Israel and in other countries, too. Until now, however, these missions have been fulfilled using either chartered commercial airliners or the Israeli Air Force’s KC-707 tanker/transports. Plans are now underway to begin replacing the KC-707 fleet with KC-46 tankers. Although a troubled program itself, the KC-46 will at least provide a limited degree of commonality with the 767, being derived from the same general airframe, although in a totally unique configuration.

A dedicated head of state aircraft has unique importance for nuclear powers, as the deterrent those weapons provide is only as relevant as the command and control ecosystems that underpin them. Having a hardened airframe with highly secure communications would help in providing a more robust command and control capability for the use of those weapons, which Israel doesn't formally acknowledge having. That being said, Israel's nuclear apparatus has functioned without such a plane in the past, so it isn't an absolute necessity.

Lapid’s plan to cancel the new VIP transport still needs to be approved by the prime minister and president. However, the well-publicized delays and cost overruns that have afflicted the program will hardly help its case. There’s little doubt, however, that the aircraft, once ready, will offer niche capabilities beyond the reach of a standard airliner or military transport. This might just be enough to save the Wing of Zion.