The test of the warhead comes as the service is reportedly preparing to try again to conduct its inaugural launch of a prototype AGM-183A missile. 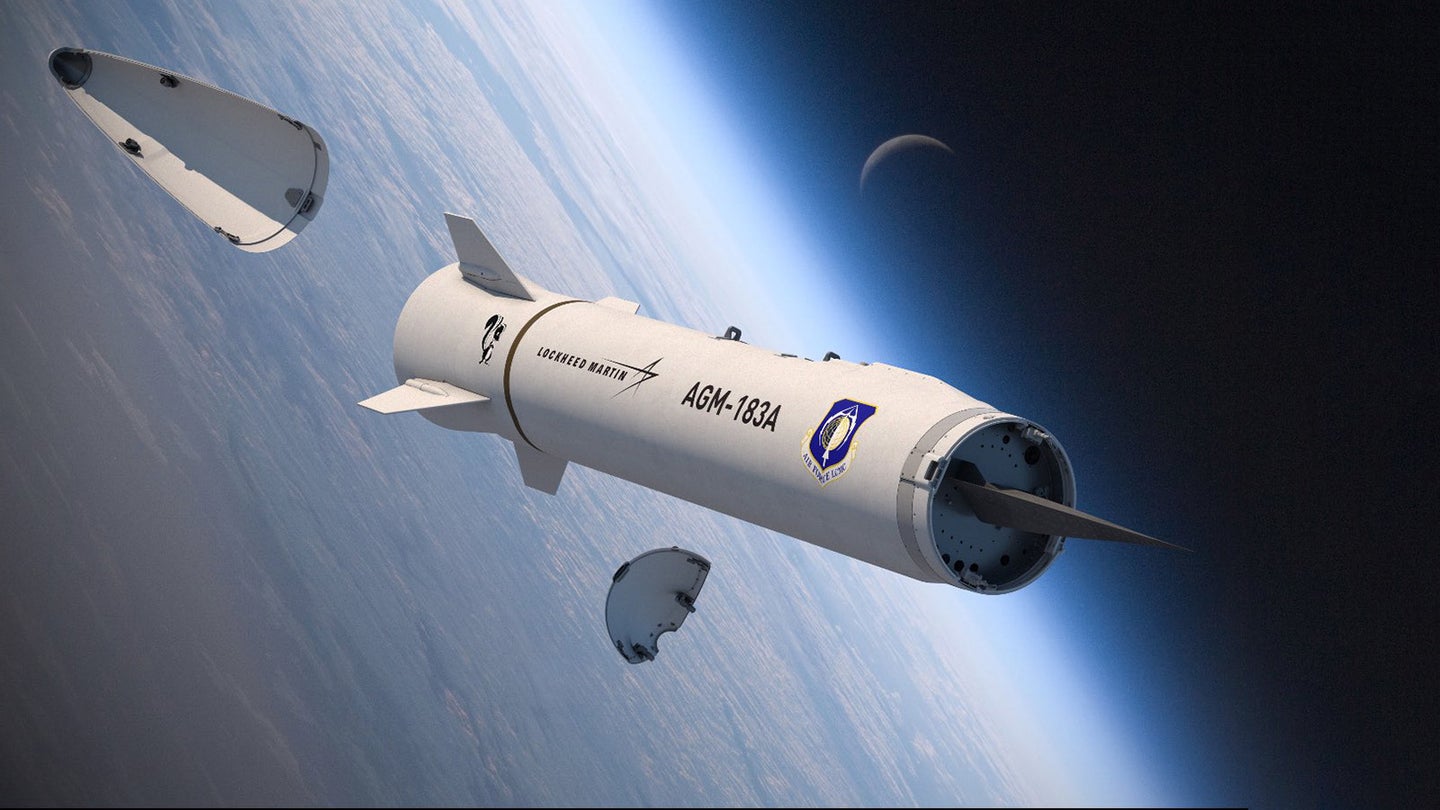 The U.S. Air Force says that it has conducted its first test of the high-explosive blast-fragmentation warhead that will go inside the boost-glide vehicle that sits at the tip of its AGM-183A Air-Launched Rapid Response Weapon hypersonic missile, or ARRW. This comes as the service is expected to try again to conduct a live-fire test of the weapon's rocket booster later this month, following its first failed attempt back in April.

The 780th Test Squadron, based at Eglin Air Force Base in Florida, conducted a so-called "arena test" of the prototype warhead. This involves setting off a warhead on the ground inside what is typically a circular array of barriers set up to collect data about its effects, such as the size and force of the blast and the range and distribution of the shrapnel produced by the detonation. The Air Force did not say where or when specifically the test had occurred.

"Some of the firsts were the new and unorthodox design and construction of the test arena, the test procedures and equipment, the warhead’s fragmentation data collecting and the post-test data processing to ensure the warhead’s effects have been accurately characterized," the Air Force said in a brief news item regarding the test.

"The unique nature and shape of the warhead required a lot of firsts for everyone involved, according to the test’s manager," David Spiker, a member of the 780th Test Squadron, also said in a statement.

The Air Force did not provide any other details about the warhead's construction or capabilities. However, it is interesting to note that, in 2018, Northrop Grumman demonstrated an advanced 50-pound-class Lethality Enhanced Ordnance (LEO) blast-fragmentation warhead that it said had a scalable design and would be well-suited to use in future hypersonic weapons. That same year, Lockheed Martin received its first contract to begin developing the ARRW. It's not clear if Northrop Grumman is involved in work on the AGM-183A. The company is part of the Lockheed Martin-led team heading up the tandem development of the U.S. Navy's Intermediate-Range Conventional Prompt Strike (IRCPS) missile and the U.S. Army's Long Range Hypersonic Weapon (LRHW), but is working on the rocket boosters for those weapons, not their warheads.

“LEO is a fairly generic technology: PBXN-110 explosive fill and fragmentation layer,” Pat Nolan, the Vice President and General Manager of Northrop Grumman’s Missile Products division, told Jane’s after the company's warhead test in 2018. “It's how we array those fragments that determines the desired effects.”

LEO, originally developed by Orbital ATK, which Northrop Grumman bought in 2018, has its origins in the development of alternatives to cluster munitions. This kind of technology offers one way to create lethal effects across a broad area without the potential to leave unexploded ordnance scattered about, which can be hazardous to friendly forces and innocent bystanders.

“Northrop Grumman has conducted more than a dozen demonstrations of our LEO technology that has proven it is a safer alternative, which is policy compliant, and delivers the same or better results on target,” Northrop Grumman's Nolan had also told The War Zone directly back in 2018. “Currently, we are working across all three services [Air Force, Army, and Navy] to transition this new warhead improvement to a variety of missile and bomb platforms.”

The development of an "Alternative Warhead" for the 227mm Guided Multiple Launch Rocket System (GMLRS) artillery rocket, another Lockheed Martin product, which was originally designed to carry a payload of cluster munitions, was one of the earliest applications of this technology. It has since been used on other artillery ammunition, among other munitions, and is set to be a feature of the warhead inside the future AGM-88G Advanced Anti-radiation Guided Missile-Extended Range (AARGM-ER) missile.

"Preliminary results indicate that the new warhead will defeat medium to medium-heavy targets while maintaining the original performance,” Northrop Grumman had explained to Jane’s in 2018. “LEO also provides penetration survivability against buildings for greater warfighter flexibility and predictable patterns for low collateral damage mission capabilities, providing a safer alternative to some legacy munitions, which can cause unintended harm to civilians and infrastructure.”

Of course, it is also entirely possible that ARRW's warhead does not use Northrop Grumman's LEO technology and is instead a different advanced blast-fragmentation design developed separately.

It is worth remember that, by definition, hypersonic weapons fly at speeds of Mach 5 or greater and, as a result, they are inherently capable of being employed simply as kinetic weapons designed to damage or destroy targets through the sheer force of slamming into them and their associated shockwaves. Still, as The War Zone

noted back in 2018, relying on kinetic force alone would restrict the ability of an individual hypersonic weapon to engage multiple targets distributed across even a very limited area.

A blast-fragmentation warhead would provide weapons, such as ARRW, was increased flexibility against various target sets. Something like Northrop Grumman's LEO technology, which the company has said can be scaled and optimized for use against different threats, could be especially valuable. Individual fragments could potentially be more destructive given then how fast the weapon would already be traveling before the warhead detonates.

The video in the Tweet below is of a test of a prototype of the common hypersonic boost-glide vehicle being developed for the Navy's IRCPS and the Army's LRHW and shows it impacting at the end of its flight. It's not clear if this shows the detonation of a high-explosive warhead inside the vehicle or not.

Whatever the exact configuration of the ARRW warhead is, this test comes as the Air Force continues to push ahead with the program, as a whole. Later this month, the service is expected to launch a prototype AGM-183A, primarily to test the function of the weapon's rocket booster. If this goes ahead as planned, this would be the first successful live-fire test of the weapon. In April, the service failed in its first attempt to carry out this test, citing an unspecified issue with the B-52H bomber carrying the prototype missile.

Boost-glide vehicles are unpowered and typically use a rocket booster to get them to an optimal altitude and initial speed. The vehicle, which is highly maneuverable, then breaks away and glides back down toward its target at hypersonic speeds along an atmospheric trajectory, while also making sudden and erratic maneuvers. This all makes it difficult for enemy forces to track, let alone attempt to intercept these threats, and also reduces the amount of time they have in which to react, overall. This could make it hard, if not impossible for an opponent to attempt to relocate critical assets or otherwise seek cover, with these weapons catching them out in the open where blast-fragmentation warheads would be most effective.

Yesterday, navigational warnings were issued for various sections of the Eastern Pacific, which could indicate a forthcoming missile test emanating from Southern California on July 10, 2021. It is possible that this could be the upcoming ARRW test launch.

However, the designated areas appear to form a track leading to the Navy's Pacific Missile Range Facility Barking Sands, a test range off Hawaii. The Air Force has previously said that the first AGM-183A test would not involve the launch of an actual boost-glide vehicle. A dummy vehicle, designed to disintegrate after detaching from the booster, would be installed instead.

It is also worth noting that the designated warning areas are in similar locations to the ones that were outlined in earlier notices that were issued in May, which also appeared to point to an imminent missile test. No such testing occurred at that time, at least that we know about.

It is possible that the planned ARRW test, as we understand it now, could still send debris flying an appreciable distance out into the Pacific. The Air Force could also now be planning to conduct a more robust test due to the various delays. The War Zone has already reached out to the service for more information.

Whatever the case, the Air Force is still looking to keep to its aggressive schedule for the program. The service has said in the past that it hopes to reach an early operational capability with the weapon by the end of Fiscal Year 2022. Its budget request for that fiscal cycle, which it released in May, includes $161 million in proposed spending to buy 12 AGM-183As. As of last year, the plan had been to buy eight full-up prototypes, with the goal being to only expend four of them in testing. The remaining four could then be made available for potential limited operational use.

With all this in mind, it will be very interesting to see what the outcome of the next ARRW flight test is and what new details about the weapon, including its warhead, continue to emerge in the coming months.