The Sierra Nevada Corporation, or SNC, has given us the first look at its MC-145B Wily Coyote. This armed aircraft, which is derived from the Polish PZL M28 Skytruck, as is the U.S. Air Force's existing fleet of C-145A Combat Coyote special operations light transport planes, is the company's entry into the U.S. Special Operations Command's Armed Overwatch trials.

In May, U.S. Special Operations Command (SOCOM) awarded a contract to SNC to demonstrate the MC-145B as part of the Armed Overwatch program, which is ostensibly seeking to acquire a new manned light attack aircraft to support U.S. special operations forces in permissive environments. SOCOM also picked four other companies – L3Harris, Leidos, MAG Aerospace, and Textron – to supply aircraft for tests at Eglin Air Force Base, where had been scheduled to begin earlier this month and wrap up at the end of July. It's unclear how much each firm received, by SOCOM said that the total combined value of all five deals was just under $19.2 million.

Until now, SNC was the only one of these firms that did not appear to have released any pictures or concept art of its design. The artwork that the company has now provided to The War Zone, seen at the top of this story, shows a distinctly modified version of the basic twin-engine turboprop M28/C-145A aircraft with an extended nose. The new front section, in particular, is similar in many respects to existing maritime patrol and search and rescue (SAR) variants of the M28.

There is a sensor turret under the plane's new snout and another one under the fuselage. At least from the art, these both appear to be WESCAM MX-15s from L3Harris, which can be configured to carry a mixture of electro-optical and infrared cameras, as well as laser designators. The MX-15 is already an option for installation in the nose on M28s configured for maritime patrol and SAR duties.

No other intelligence, surveillance, or reconnaissance (ISR) capabilities are specifically mentioned in SNC marketing materials about the aircraft. It is possible that the MC-145B could be large enough to carry aerial versions of SOCOM's Joint Threat Warning System (JTWS) family of signals intelligence systems, some of which are able to fit inside the slightly larger C-146A Wolfhound light transport. SNC does say that the Wily Coyote has a robust communications and data-sharing suite and is designed to be able to readily accommodate new and improved capabilities on that front as time goes on.

The MC-145B configuration also has four underwing hardpoints for external stores. The SNC marketing materials for the aircraft say that it can carry AGM-114 Hellfire missiles and pods filled with AGR-20 Advanced Precision Kill Weapon System II (APKWS II) laser-guided rockets under its wings. It adds that there are also "provisions" for loading GBU-39/B Small Diameter Bomb (SDB) precision-guided glide bombs on these hardpoints.

The aircraft can also be configured to launch various kinds of precision-guided munitions, as well as small drones, via the increasingly popular Common Launch Tube (CLT), through eight apertures in the floor of the main cabin. This setup also allows the launchers to be reloaded in flight. The SNC marketing material specifically mentions Dynetics GBU-69/B Small Glide Munition (SGM) glide bomb and Raytheon's AGM-176 Griffin missile, as well as Coyote unmanned aircraft, another Raytheon product, as potential payloads.

As a brief aside, it's interesting to note that the MC-145B depicted on this page of the marketing materials is painted in a scheme that includes a series of distinctive diagonal white stripes on the tail, which is clearly based on the ones worn by aircraft assigned to the U.S. Army Air Force's 1st Air Commando Group in the China, Burma, and India (CBI) theater of operations during World War II. In March, it had emerged that SNC had painted one of the three A-29B Super Tucano light attack aircraft that it is set to deliver to U.S. Air Force Special Operations Command (AFSOC) in a similar scheme. AFSOC's 1st Special Operations Wing at Hurlburt Field in Florida traces its roots back to the 1st Air Command Group. The acquisition of these A-29Bs is unrelated to the Armed Overwatch program.

SNC has also highlighted that the MC-145B retains the M28/C-145A's rear ramp, which it says could enable it to deploy larger payloads simply by rolling them out the back. Raytheon's ADM-160 Miniature Air-Launched Decoy (MALD) and Dynetics' X-61A unmanned aircraft, are depicted as things the aircraft could employ using this method.

The MALD is effectively a small cruise missile that carries an electronic warfare package that can jam enemy radars or try to trick them into thinking waves of planes or missiles are heading at them from certain directions, depending on the variant, as you can read more about here. The X-61A has been in development for years now as part of the Defense Advanced Research Projects Agency's (DARPA) Gremlins program, which is exploring the idea of swarms of drones with various capabilities that can be deployed and recovered by a mothership aircraft in mid-air. The primary concept of operations envisioned for Gremlins, which you can learn more about here, is centered on overwhelming or otherwise neutralizing enemy air defenses. As such, SNC's mention of the MC-145B potential ability to employ either of these systems in the future is particularly interesting given the stated focus of SOCOM's Armed Overwatch program on operations in permissive environments against lower-end threats.

Beyond the rear ramp, SNC says that the MC-145B can be readily reconfigured for non-armed overwatch missions, such as light transport, aerial resupply, and casualty evacuation duties, if desired, as well. What the Wily Coyote's exact performance specifications or operational capabilities might be in any of these configurations while performing any of these mission sets is unclear.

SNC says the aircraft will able to operate from austere locations with limited infrastructure and will be self-deployable, while also boasting significant overall range and loiter time. The belly sensor turret is notably designed to retract into the fuselage when not in use and protection is provided for the one on the nose to help ensure it can operate from unimproved airstrips. The cargo carrying capacity of the aircraft would also help with deploying to forward locations with limited support.

In the past, PZL Mielec has touted the M28, broadly, as having "best in class distance per payload STOL [short takeoff and landing] capability," as well as a range of up to 800 nautical miles with as much as 1,000 kilograms, or around 2,200 pounds, of mission equipment installed. That company has also said the design has operational endurance of between five and 10 hours, depending on fuel load and flight profile.

All of these could easily be points in the MC-145B's favor during the Armed Overwatch trials, which SOCOM has said will evaluate the ability of the selected aircraft to operate from austere locations, demonstrate appreciable range and endurance, and show off a variety of ISR, munitions, and communications and data-sharing capabilities. The reconfigurable nature of the Wily Coyote could be particularly attractive given the plan for the Armed Overwatch program is for the winning design to replace AFSOC's existing single-engine turboprop U-28A Dracos, which have relatively robust ISR suites and a secondary ability to operate as light transport planes, if required. AFSOC also continues to operate C-145As in a light transport configuration, primarily now to support training engagements with foreign allies and partners.

With this in mind, it is perhaps most interesting to highlight how the MC-145B is, by far, the largest of the five entrants and that the rest of the field is extremely diverse. MAG Aerospace is also pitching a more multi-purpose platform, its MC-208 Guardian, which is based on the single-engine Cessna 208 Cavaran and is capable of performing missions beyond armed overwatch.

The other three entries are two-seat single-engine turboprop light attack aircraft. Leidos lead a team offering the Bronco II, an unusual pusher-prop design originally developed in South Africa that you can read more about here. L3Harris partnered with Air Tractor to submit AT-802U Sky Warden, the latest iteration of the latter company's armed derivative of the AT-802 crop-duster. Textron's submission is the AT-6E Wolverine, its most recent light attack variant of the T-6 Texan II trainer.

More details about the performance and capabilities of all of these aircraft, as well as exactly what SOCOM might be looking to get out of them, are likely to emerge if the initial round of flight testing wraps up next month as planned. The results of those demonstrations will also undoubtedly inform how the Armed Overwatch program proceeds.

In February, Air Force Lieutenant General James Slife, head of AFSOC, said he hoped to begin buying the first of what could become a fleet of 75 Armed Overwatch aircraft in the 2022 Fiscal Year, which begins on Oct. 1. Congress had blocked funding to purchase any planes as part of this program in the 2021 Fiscal Year, with legislators saying, in part, that they wanted more information about SOCOM's need for these aircraft, though they did agree to fund this initial demonstration. A draft of the 2022 Fiscal Year defense spending bill that the House Appropriations Committee put out yesterday would, if it passed and becomes law, provide another $166 million for this effort.

It's worth noting that SNC could market the MC-145B to other customers, including foreign armed forces, that might be interested in the capabilities it has to offer, as well. Back in 2013, AFSOC had actually explored the possibility of converting C-145As into small side-firing gunships, a sort of miniature take on the AC-130 concept, with an eye toward potentially being able to transfer that capability to American allies and partners.

No matter what happens now, it still very interesting to get our first real look at the MC-145B Wily Coyote concept. 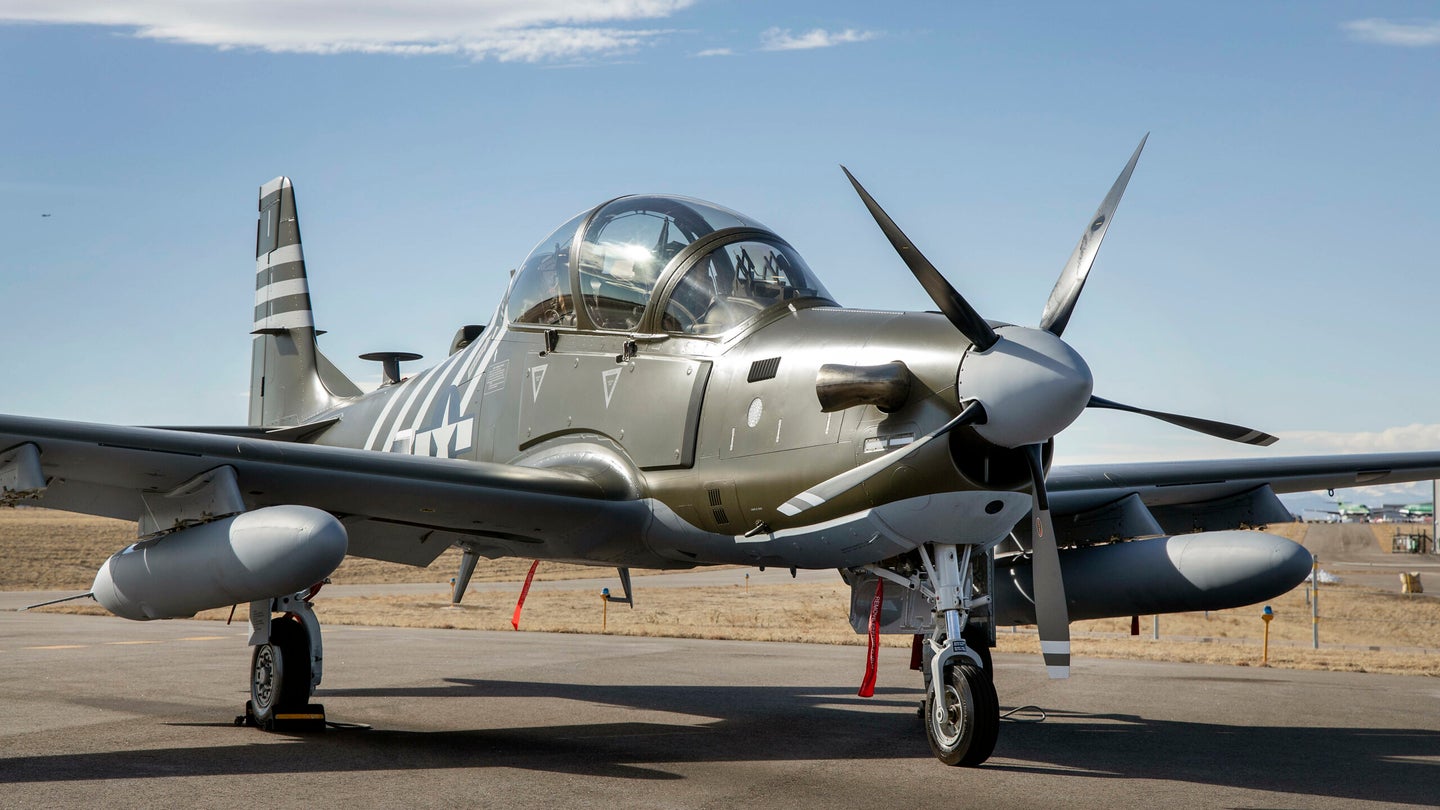 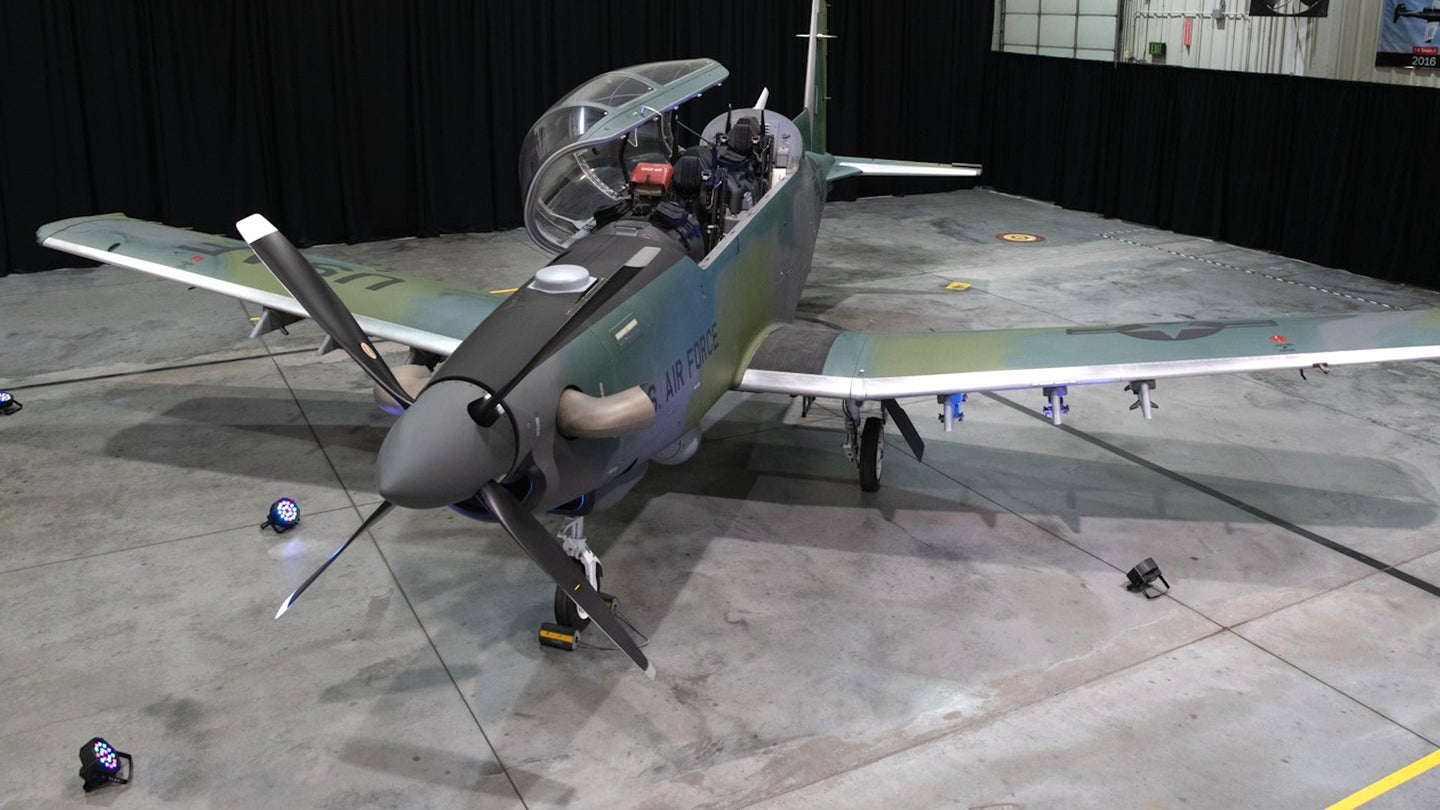 The Air Force plans to use its small fleet of AT-6Es to help develop a low-cost network for allies and partners, not fly combat missions. 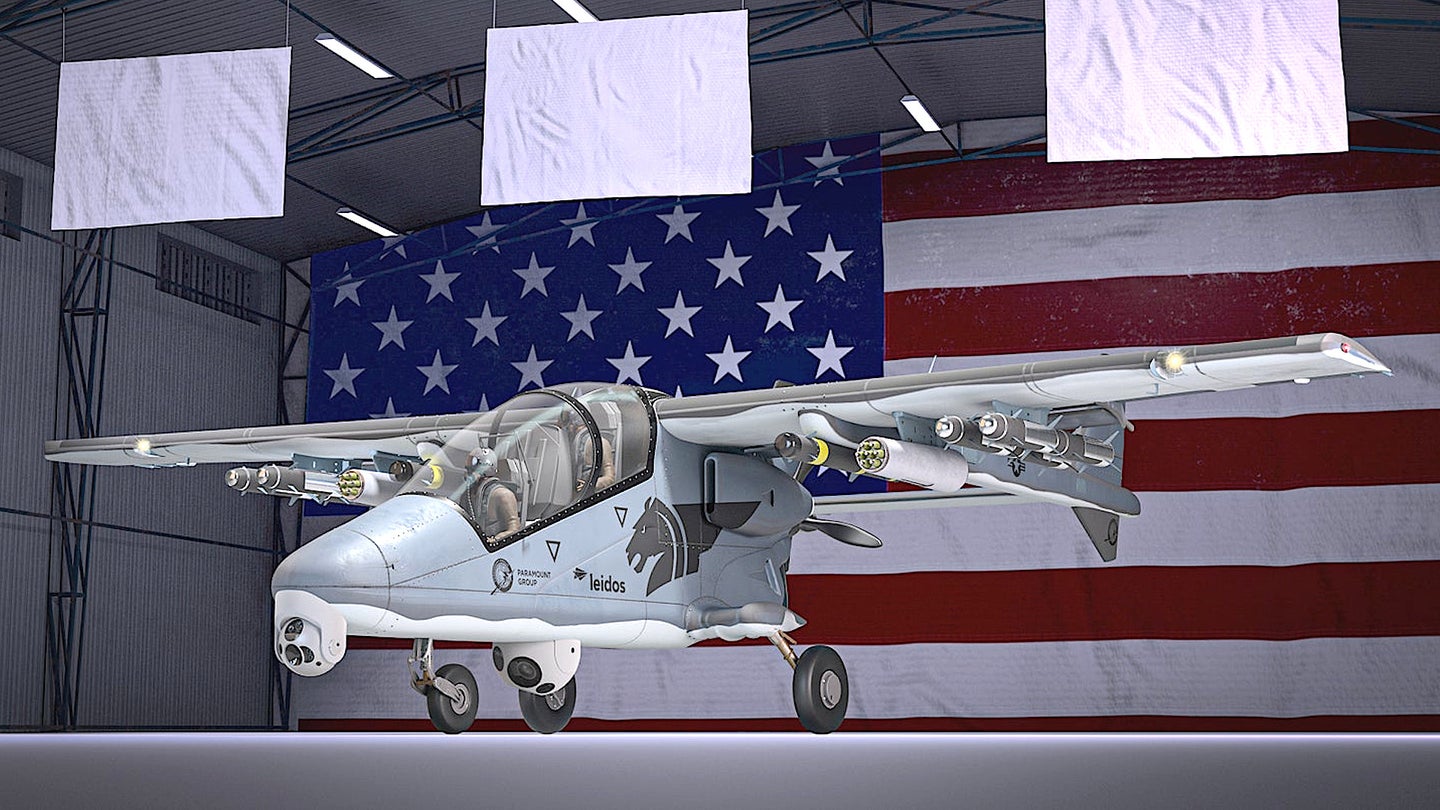