Su-30SM fighter jets repeatedly buzzed the Dutch warship and jammed some of its electronic systems.

The Royal Netherlands Navy has now confirmed that its De Zeven Provincien class frigate HNLMS Evertsen, which has been sailing in the Black Sea together with the U.K. Royal Navy destroyer HMS Defender, was harassed by Russian fighter jets last week. The announcement comes after Russia and the United Kingdom entered something of a war of words last week when the Type 45 destroyer HMS Defender

conducted maneuvers in an area close to Russian-controlled Crimea. Both of these ships are currently part of the British aircraft carrier HMS Queen Elizabeth’s

The Royal Netherlands Navy today released a statement highlighting the events that occurred last Thursday, June 24. That was the day after Russia claimed to have dropped bombs and fired warning shots to ward off HMS Defender, which Moscow claimed had violated the Russian maritime border around the Crimean Peninsula. The Kremlin seized Crimea from Ukraine in 2014, an annexation that neither the Netherlands nor the United Kingdom recognizes as legal.

According to the Royal Netherlands Navy’s account, HNLMS Evertsen was “southeast of Crimea” on June 24 when Russian fighter jets “created unsafe situations” in the Black Sea. No further details are provided of the warship’s location at this point, although it seems, at least, the Dutch vessel did not follow the same course as HMS Defender.

A series of photos released by the Royal Netherlands Navy today shows a pair of Su-30SM multirole fighter-bombers, likely from the Russian Navy, flying low over the warship, with at least one of the aircraft armed with a pair of Kh-31 (AS-17 Krypton) supersonic anti-ship missiles under the engine nacelles.

In what the Dutch Ministry of Defense describes as “repeated harassment,” between around 3:30 PM and 8:30 PM that day, the Su-30SMs flew “dangerously low and close by, performing feint attacks.” Su-30SMs were also involved in last week’s incident with HMS Defender, with at least one example seen shadowing the warship in an official Russian Ministry of Defense video. These Russian Navy jets are assigned to the 43rd Independent Naval Assault Aviation Regiment based at Saki in Crimea.

The Dutch account describes the Russian aircraft being armed with bombs (not immediately visible) and air-to-surface missiles. The jets also used their onboard electronic warfare systems to disrupt electronic equipment onboard the Evertsen, according to the Dutch. The Su-30SM is equipped with an internal Khibiny-U electronic warfare suite that includes powerful jammers to blind and confuse adversary radars.

An earlier video of Russian Navy Su-30SMs operating from their base in Crimea:

“Evertsen sailed on the open sea in international waters,” added Captain-Lieutenant George Pastoor, the commander of the Dutch vessel. “There was no reason whatsoever for these aggressive actions. Despite this, the mock attacks continued for several hours. It was irresponsible and unsafe behavior at sea.”

The Dutch Minister of Defense, Ank Bijleveld-Schouten also described the Russian actions as “irresponsible,” arguing that the Evertsen was within its rights to sail there. “The Netherlands will address Russia about this,” she added.

“The Russian actions violated the right to the free use of the sea,” the Dutch Ministry of Defense contends. “In addition, they go against mutual agreements, as laid down in the INCSEA [Prevention of Incidents On and Over the Waters Outside the Limits of the Territorial Sea] treaty. The agreement must prevent unsafe situations at sea.” Among the provisions in the INCSEA treaty is the requirement that “aircraft commanders [use] the greatest caution and prudence in approaching aircraft and ships of the other party.” The terms of the treaty prohibit “simulated attacks against aircraft or ships, performing aerobatics over ships, or dropping hazardous objects near them.”

Not mentioned in the Dutch account is the presence of a Russian Navy warship, a Black Sea Fleet Buyan-M class corvette, apparently the Ingushetiya.

While tensions between Russia and the United Kingdom in the Black Sea were increasing last week, it was known that the Evertsen was in the area, having temporarily broken away from CSG21 in the Mediterranean to enter the Black Sea, along with HMS Defender.

The whereabouts of the Dutch warship after that were unclear, however, and the Russian reports about the actions taken against HMS Defender did not mention the Evertsen.

Last week, the Russian Ministry of Defense, as well as Russian politicians, took the opportunity of the incident involving HMS Defender to emphasize its tough response to what was described as “a flagrant violation of international norms and standards.” In turn, the British side stated that its warship was “conducting innocent passage through Ukrainian territorial waters in accordance with international law.”

So far, no official reference has been made by Moscow to the Dutch warship’s actions, and those of the Russian Navy in response to it.

However, the Dutch account indicates that the Evertsen was in international waters, outside of the territorial waters around Crimea that are claimed by both Russia and Ukraine. That is in contrast to HMS Defender, which was within around 10 nautical miles of the Crimean coast, albeit in what the British government described as an “internationally recognized traffic separation corridor.”

With that in mind, it is possible that Moscow is less willing to draw attention to the actions of its navy. It’s also almost certain that, unlike in the HMS Defender incident, the Russian side would not have issued warnings to the Dutch warship to leave these waters, since there was seemingly no violation of the Russian state border, claimed or otherwise.

Like the incident last week, the encounter between the Evertsen and the Russian Navy seems to have led to an official complaint from one of the governments involved. It is also, perhaps more significantly, another example of escalation in the Black Sea region. This comes amid increased activity in this area in general, with the Russian military recently conducting drills in Crimea, while the latest iteration of the annual U.S.-led Sea Breeze exercise, centered on Ukraine, got underway yesterday. A total of 32 countries are participating in what is the largest Sea Breeze drill to date, which will involve 32 warships, plus dozens of aircraft.

There have been other recent incidents in these waters, too, including in January, when two Arleigh Burke class destroyers — the USS Donald Cook (DDG-75) and the USS Porter (DDG-78) — entered the Black Sea and were met by an aggressive Russian response. They were also buzzed by a Su-24 strike aircraft, while Su-30SMs armed with anti-ship missiles carried out drills in the vicinity.

With the Russian Navy already taking a keen interest in CSG21 in the eastern Mediterranean — and this interest clearly being reciprocated by the British side — the potential for yet more standoffs between Russian and NATO forces in both these bodies of water is perhaps at its highest in recent history. 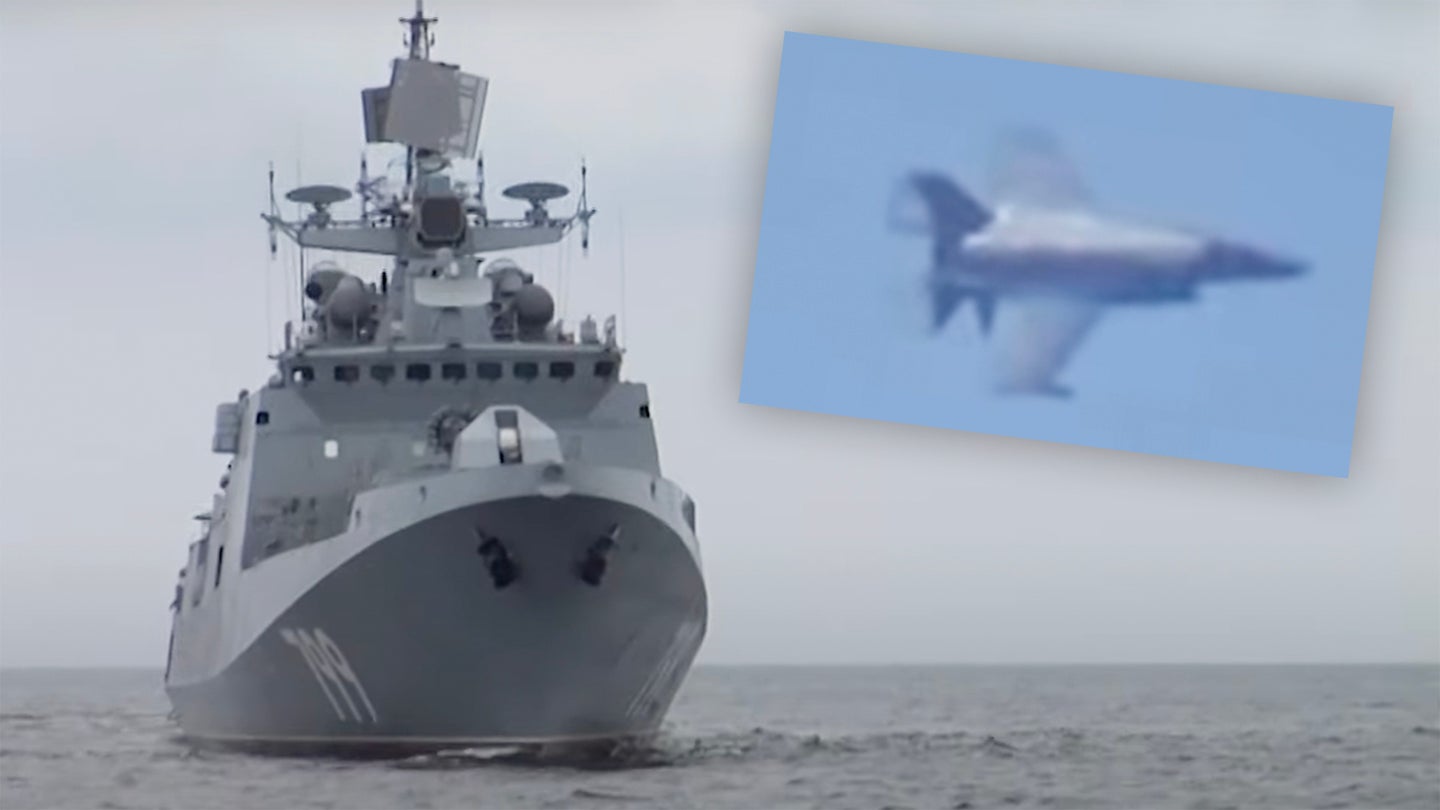 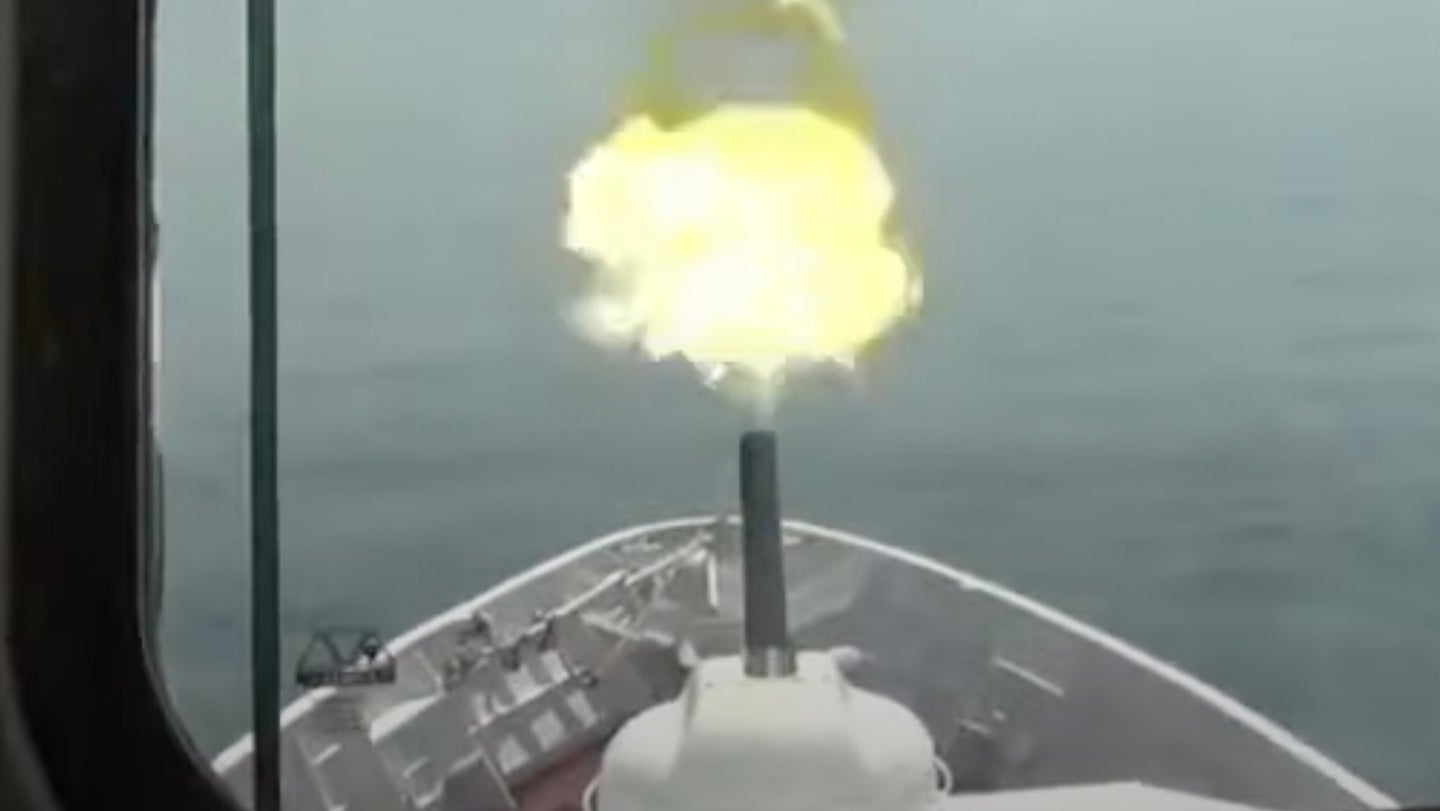 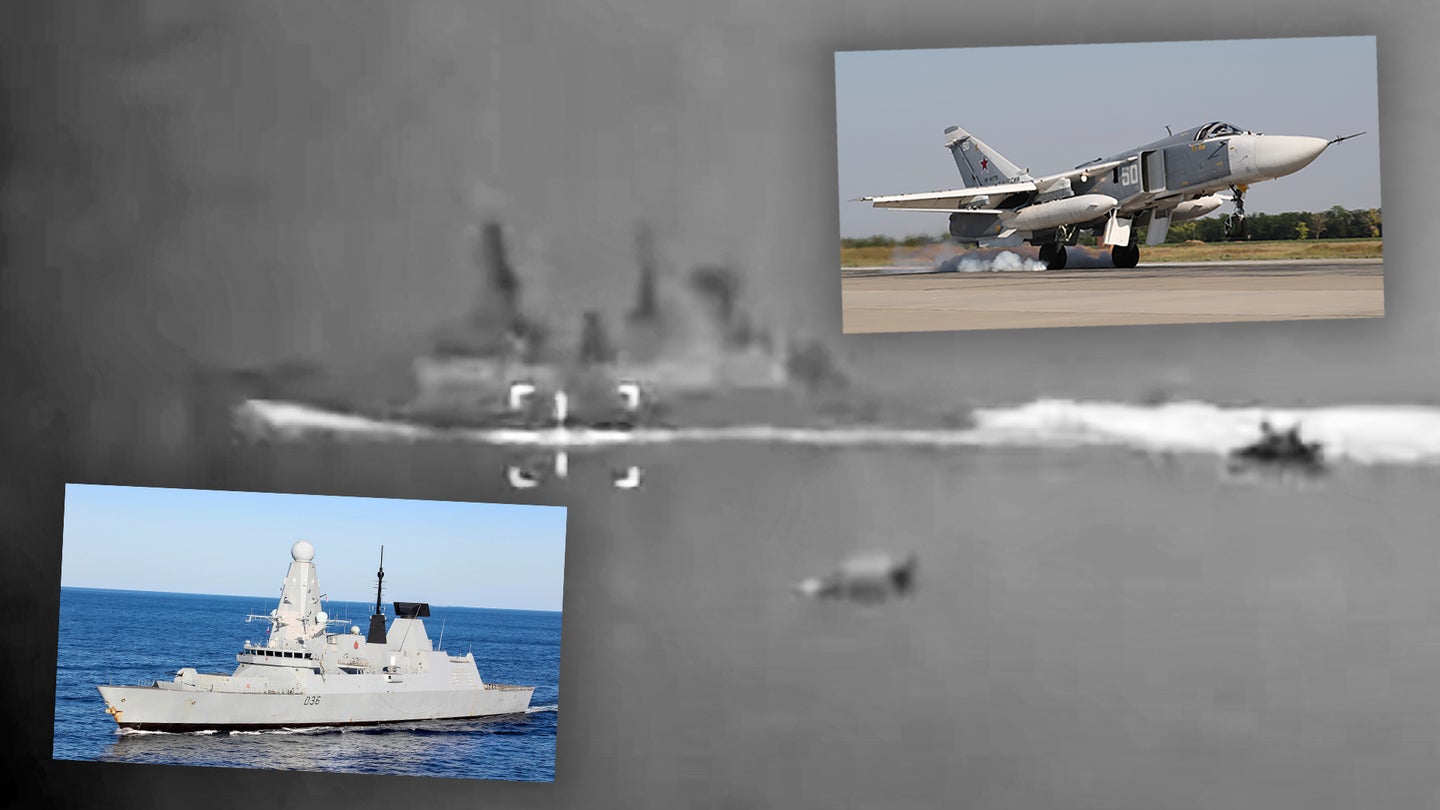 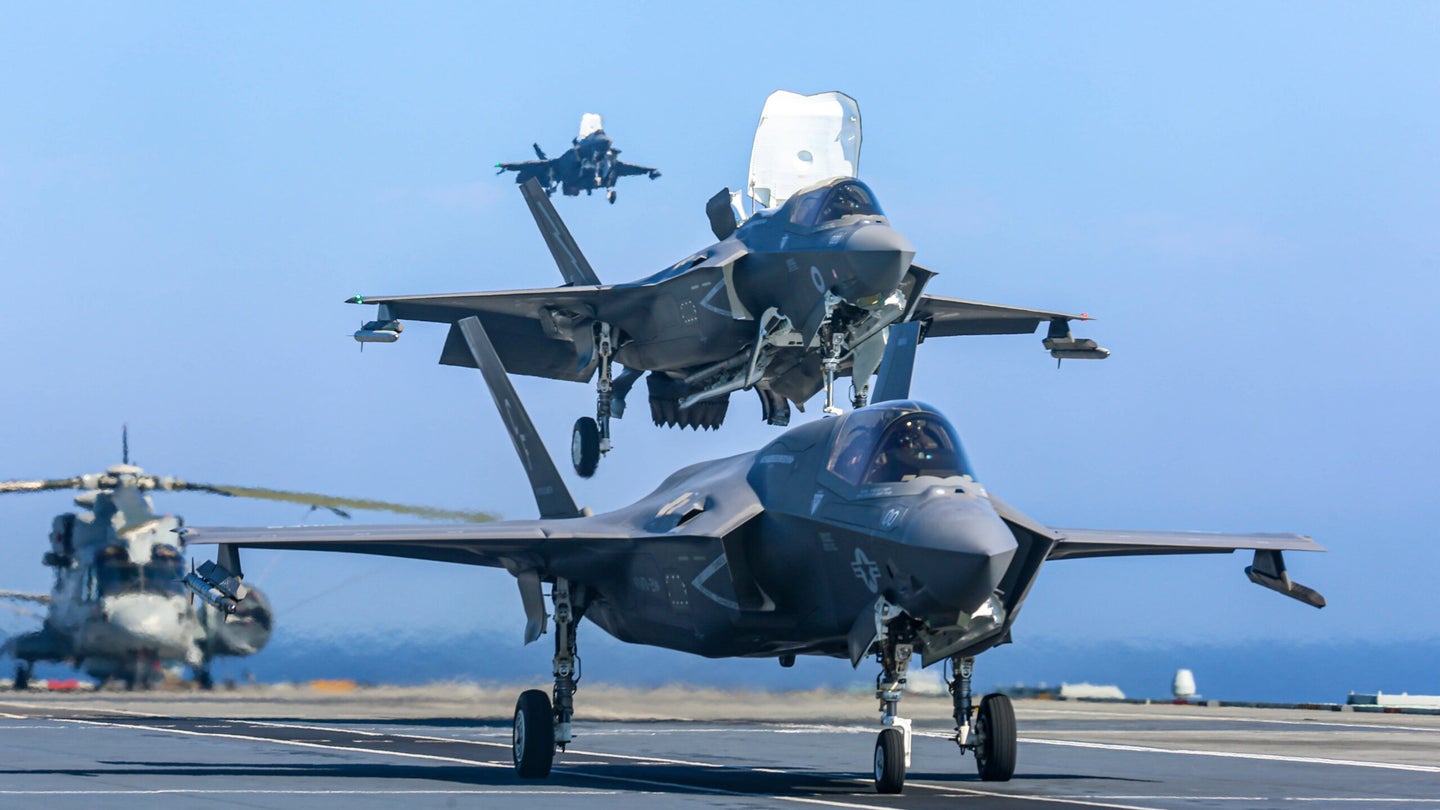 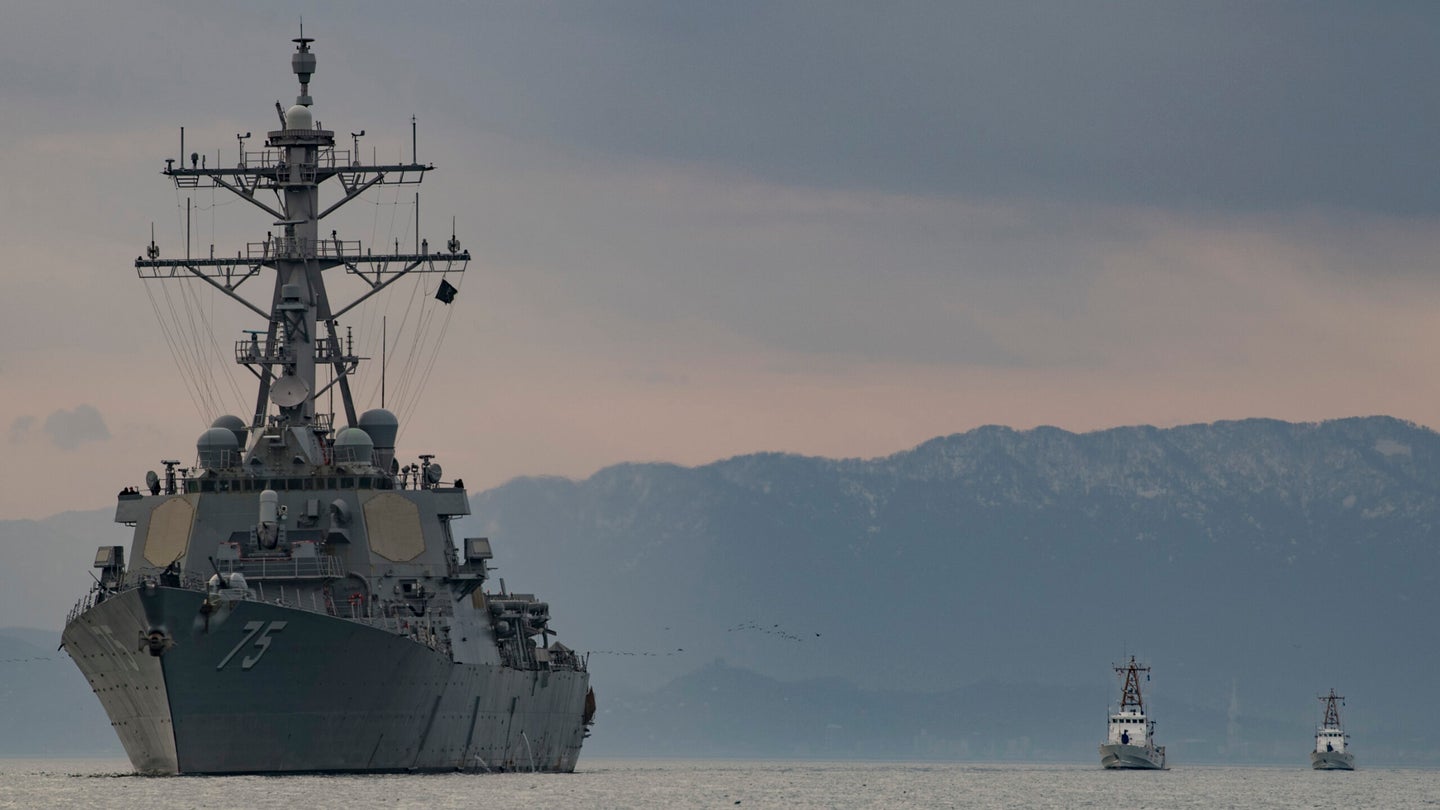