The Navy has shared some additional details about USS Alaska‘s very rare stopover, which comes amid a flurry of naval activity in the region. 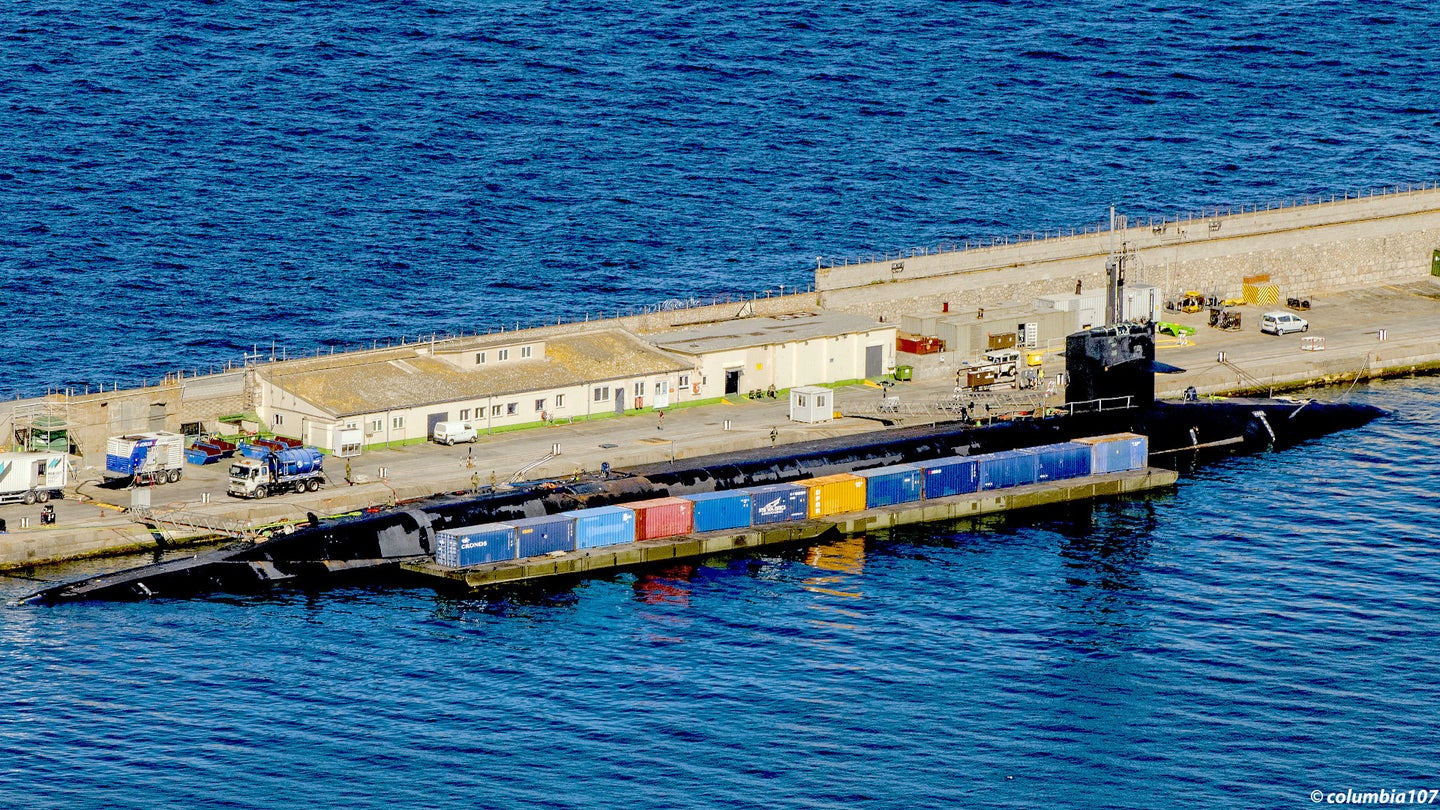 Following the arrival of the USS Alaska in Gibraltar yesterday, the U.S. Navy has confirmed that this is the first time in more than 20 years that an Ohio class ballistic missile submarine, or SSBN, has visited the U.K. Royal Navy's base in this British Overseas Territory. The service has also now said that this extremely rare stopover was a previously scheduled port visit for logistics purposes.

The Navy had officially announced that USS Alaska had sailed into Gibraltar yesterday, itself an unusual bit of publicity regarding the operational activities of one of its SSBNs, which generally seek to avoid any kind of attention during their nuclear deterrent patrols. Navy Lieutenant Commander Lenaya Rotklein, a spokesperson for U.S. Naval Forces Europe-Africa/U.S. Sixth Fleet, told The War Zone that this was the first time an Ohio class SSBN had paid a visit to the Her Majesty's Naval Base Gibraltar since 1999. It's unclear which of the 18 Ohios traveled there some 22 years ago.

It is important to point out that this does not count visits to Gibraltar since then by any of the four Ohios that were converted into guided-missile submarines, or SSGNs. These boats, which you can read about in much more detail in this past War Zone feature, are truly multi-mission platforms that have robust conventional strike, special operations forces support, intelligence-gathering, and command and control capabilities.

"USS Alaska (SSBN 732) conducted a previously scheduled brief stop for logistics at the Port of Gibraltar [on] June 28, 2021," Lieutenant Commander Rotklein added. "Alaska is on a routine patrol in the U.S. Sixth Fleet area of operations in support of U.S. national security interests in Europe and Africa. This brief stop strengthens cooperation between the United States and the United Kingdom-Gibraltar."

Rotklein did not elaborate on what the submarine's "logistics" needs were that required it to stop in Gibraltar. The scheduled nature of the stop could indicate this was simply a visit to onload various supplies. It is also worth noting that other types of American submarines do regularly stop at this Royal Navy base, which can accommodate nuclear-powered vessels, for various reasons, including for maintenance.

A picture, seen below, of Alaska at Her Majesty's Naval Base Gibraltar does show it venting what appears to be steam from its sail. However, this is completely normal for nuclear-powered submarines, especially those in port, and is associated with the boat's auxiliary diesel generators.

That image and others also show a Mexeflote barge loaded with shipping containers along the opposite side of the submarine's hull from the pier. It's not entirely clear what the purpose of this is, but it seems highly likely that it is a force protection measure.

Modern military submarines, in general, typically have significant force protection requirements while sailing on the surface, where they are limited in their ability to maneuver, have limited close-in defenses, and are generally more vulnerable to a variety of threats, overall. This goes double for Alaska, which is not only nuclear-powered, but is almost certainly carrying dozens of thermonuclear nuclear weapons. Each of the Navy's Ohio SSBNs can carry up to 20 Trident D5 submarine-launched ballistic missiles.

Each Trident D5 can carry up to 14 individual W76-1 or W88 nuclear warheads, with estimated yields of around 100 kilotons and 475 kilotons, respectively. Various arms control agreements between the United States and Russia mean that these missiles typically only have five or six installed at any one time. In addition, since January 2020, at least some Ohio SSBNs have been conducting patrols with some number of Trident D5s armed with lower-yield W76-2s. These warheads, which are believed to have yields of only around five kilotons, are particularly controversial with proponents arguing that they give the U.S. government valuable additional deterrent flexibility, while critics say that they increase the likelihood of a nuclear exchange. You can read much more about the debate surrounding the W76-2 here.

With all of this in mind, it is hard to see this visit, scheduled or not, as simply a logistical matter. As already noted, an Ohio SSBN visiting Gibraltar is an exceedingly rare occurrence. In fact, the very first time one of these boats sailed into port there was when USS Maryland arrived in 1995. This was also the first time one of them had ever sailed into the Mediterranean Sea. An individual who shared a picture from that stopover on Reddit last December wrote that "it was a show of force. We were supposed to 'sneak' through the straits undetected. However due to a medivac [sic; medevac; medical evacuation] we had had to alter plans." Even without the unexpected need to get a seriously ill or injured crew member off the boat, it can be tricky for a submerged submarine to get through the highly strategic and heavily trafficked Strait of Gibraltar, which links the Atlantic Ocean, to the West, to the Mediterranean, as you can read more about here.

Alaska's arrival in Gibraltar now comes amid a flurry of other maritime military activity on the part of the Navy, as well as other U.S. allies, and Russia, both in the Mediterranean and the Black Sea. The Russians have been carrying out anti-ship drills at the eastern end of the Mediterranean that have notably involved Tu-22M3 bombers loaded with anti-ship cruise missiles and MiG-31K combat jets carrying Kinzhal hypersonic missiles flying from their expanded Khmeimim outpost in Syria, among other aircraft, ships, and submarines. The U.K. Royal Navy's aircraft carrier Queen Elizabeth and its multi-national strike group, which includes U.S. Marine Corps F-35B Joint Strike Fighters embarked onboard and escorting allied warships, is in that area, too.

Yesterday, U.S. Naval Forces Europe-Africa/U.S. Sixth Fleet also kicked off the largest ever iteration of the annual Sea Breeze exercise in the Black Sea, which is focused on Ukraine. A total of 32 countries are participating this year. Russian officials say they are now monitoring this drill, which the Navy says will involve 32 ships and dozens of aircraft.

In addition, as The War Zone

At the same time, it is indisputable that the activities of the Navy's Ohio SSBNs, in general, have been oddly public as of late. Whether planned in advance or not, the first visit by America's most destructive weapon system to Gibraltar in more than two decades is a significant show of force in the region at a time when geopolitical friction between the United States, as well as its allies, and Russia seems to be building.

Special thanks again to William Jardim for sharing his pictures of USS Alaska in Gibraltar with us.

USS Alaska’s highly unusually port visit in the Mediterranean is just the most recent curiously public appearance by one of the Navy’s ‘boomers.’

The Cold War cat-and-mouse game of anti-submarine warfare became very hot as the USS Steinaker approached the Mediterranean in January of 1967.