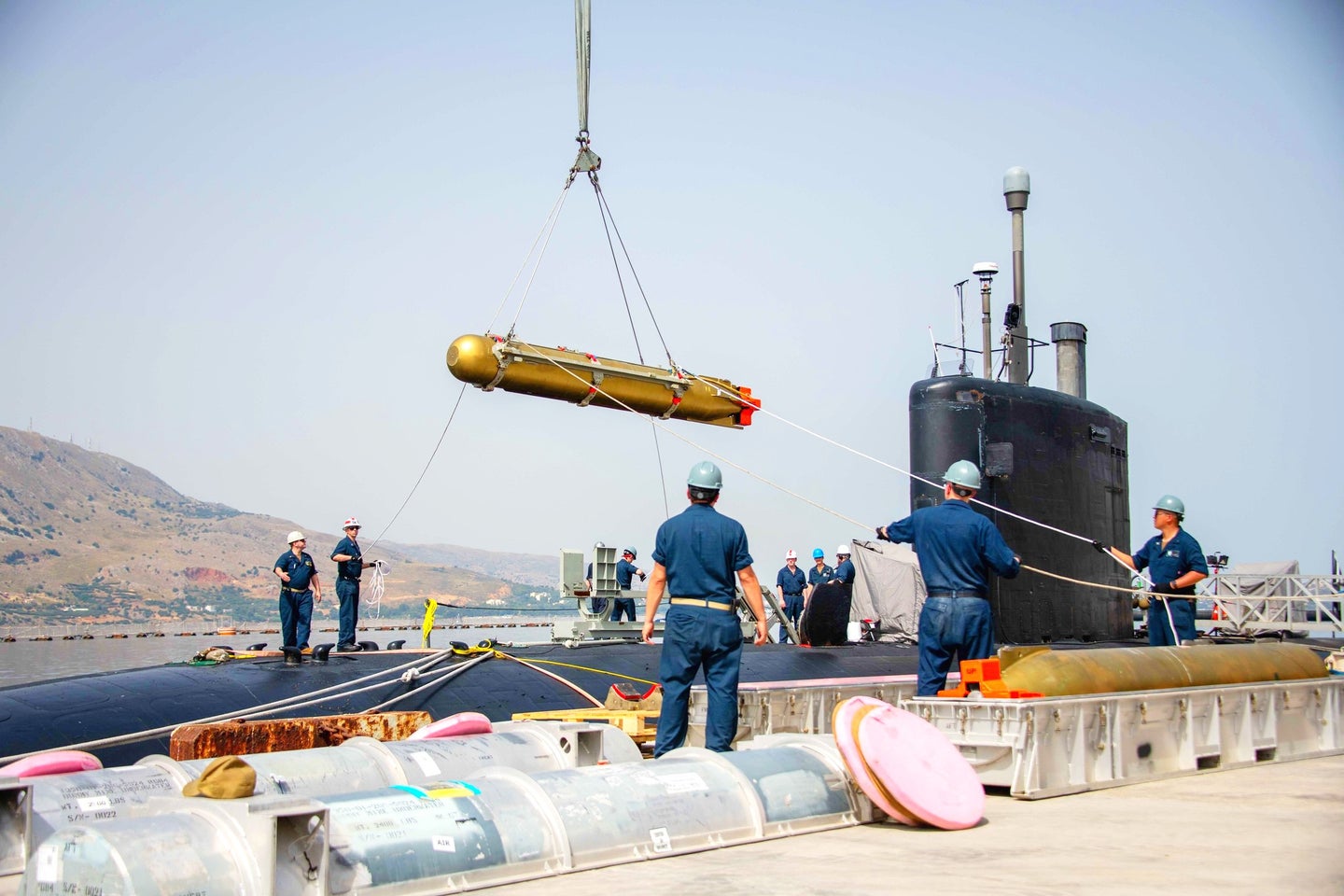 Images shared by the U.S. Navy’s Sixth fleet show the Los Angeles class attack submarine USS Montpelier conducting exercises with dummy Mk 67 Submarine Launched Mobile Mines, or SLMMs, while deployed to the Mediterranean Sea. Submarine-launched mines, such as the Mk 67, and other anti-submarine weapons are seeing a resurgence of sorts in recent years as naval competition between major powers continues to heat up in the region and worldwide.

While we don't know if Montpelier left port with the dummy mines to conduct exercises, the images seem to be the Navy's way of showing off that deployed submarines can show up to bases within the region and onload mines, should that ever be required.

Souda Bay is home to several military installations including the NATO Maritime Interdiction Operational Training Centre (NMIOTC). According to its website, NMIOTC's mission statement is "To conduct the combined training necessary for NATO forces and Partners to better execute surface, sub-surface, aerial surveillance, and special operations activities in support of Maritime Interdiction Operations (MIO).” In addition, the U.S. Navy operates Naval Support Activity (NSA) Souda Bay, a 110-acre facility on the north end of a peninsula that also includes the Hellenic Navy's Crete Naval Station and the Hellenic Air Force's Souda Air Base.

The Mk 67 SLMM was first deployed in 1983 and is the only submarine-launched mine currently in U.S. Navy service. The mines have a depth range of up to 600 feet and carry a 330-pound high explosive charge triggered by a combination magnetic/seismic/pressure target detection device.

SLMMs are modified electrically-powered Mk 37 torpedoes and can therefore be deployed in a clandestine manner deep a denied area, such as a port or shipping lane inside hostile territory, from a stand-off position. The exact range of the SLMMs is unclear, but different versions of the Mk 37 had maximum ranges in the thousands of yards, depending on their set speed.

In general, even unpowered submarine-launched mines inherently have the ability to be deployed in a way that significantly reduces the chance that the enemy will be aware of them compared to air-launched varieties. The deployment of mines from surface vessels or aircraft is much easier to detect, and it's more difficult for those platforms to seed mines in denied areas than it is for submarines.

Still, in recent years, the Navy has been pursuing multiple types of new mines, including two air-dropped versions of the Quickstrike family of mines that offer game-changing capabilities such as the ability to be dropped from any altitude and be launched from up to 40 miles away. With their precision guidance, highly intricate minefields can be laid, even up rivers, from standoff ranges.

The Navy is also developing another air-dropped mine called Hammerhead to replace the Mk 60 Encapsulated Torpedo which is intended to lie in wait for months at a time after being deployed. The Clandestine Delivered Mine (CDM), a shadowy system believed to be in the prototype phase and intended for deployment aboard large unmanned underwater vehicles (UUVs), reportedly finished testing last year.

The development of these new anti-submarine capabilities coincides with expanding submarine threats from potential "great power" adversaries such as Russia and China, with smaller nations also becoming increasingly able to harness effective naval power via underwater means. It's possible the Sixth Fleet's recent publicized exercises with the Mk 67 SLMM were intended as a reminder of this capability to adversary submarine forces in the area.

The U.S. Sixth Fleet, which operates in support of U.S. national security interests in Europe and Africa, has been increasingly tasked with projecting power in the eastern portion of the Mediterranean as a counterbalance to the Russian buildup in and around Syria. "We're watching them [the Russians] very very closely,” said U.S. Navy Rear Admiral William Houston in 2019 while serving as the Deputy Commander of Sixth Fleet. “There's really not a day where we're not watching them, every single day." In response to this uptick in Russian submarine activity in the Mediterranean, as well as similar increases in the Atlantic and Arctic regions, the Navy also reactivated the Second Fleet in 2018.

The U.S. Navy’s existing and new mine capabilities could provide an additional layer of defense around strategic assets like naval bases, ports, or even surrounding temporary outposts or forces deployed on small islands like those that dot the Mediterranean or the Pacific. Mines have long been a major component of denying access to certain areas or deterring amphibious landings, for instance. Most importantly, the use of standoff mines or those covertly emplaced by a submarine could prevent adversaries from projecting their own forces, including even leaving their harbors, during a time of war.

The location of the mine-loading exercises in Souda Bay is significant given that the Eastern Mediterranean is now a hotbed of Russian, and often Russian-US submarine activity. These new images of the Navy's submarine-launched mines suggest the service is seeking to highlight this capability at a time when growing geopolitical tensions are drawing more attention to submarine activity in the region.