A startup is reviving the powerplant used in the V-1 flying bomb for use in an air-launched decoy, and possibly more. 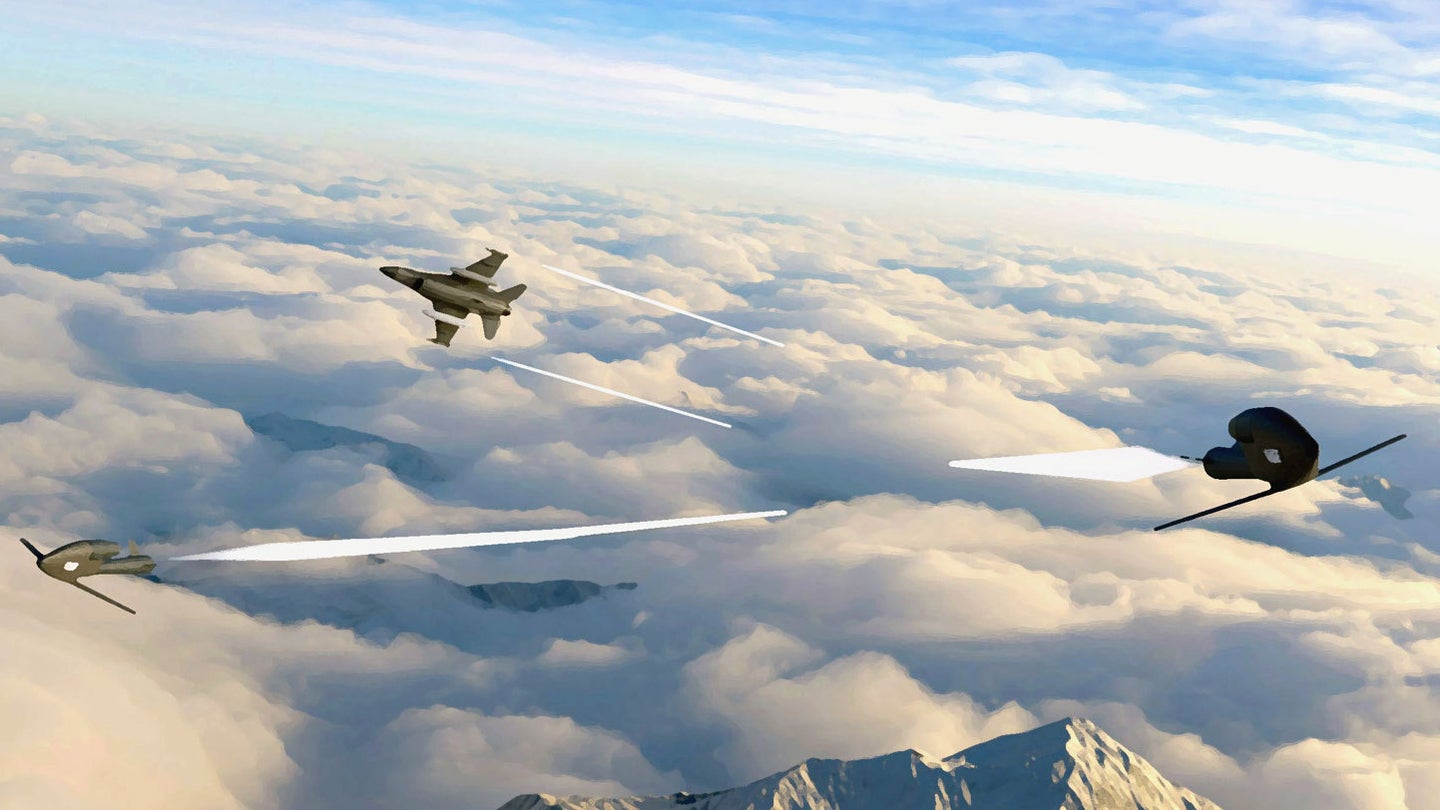 The U.S. Air Force is looking at the potential of pulsejet technology as part of broader efforts to provide reliable, low-cost powerplants for future drones and missiles. The service is kicking off its new foray into pulsejets by funding the development of a new air-launched decoy drone. While a decoy is the immediate focus, there is also scope for the decoy, and its propulsion system, to have other potential applications, too.

The Air Force Armament Directorate recently awarded the Wave Engine Corporation startup a $1-million contract to develop and then demonstrate the pulsejet decoy, known as the Versatile Air-Launched Platform (VALP). The award followed what the company describes as a “highly competitive process with hundreds of applicants” as the Air Force seeks to fund promising new technologies for possible use in future capabilities.

Concept artwork supplied by the company shows a pair of VALPs being launched as decoys from an F-16 fighter jet, as seen at the top of this story. While hard to judge the scale of the decoy from the image, it clearly has a narrow but unusually deep forward fuselage containing the pulsejet, low-mounted swept wings, and a slender rear body possibly carrying a V-shaped tail unit.

The limited description suggests a role similar to the existing ADM-160 Miniature Air-Launched Decoy (MALD), which is dropped by aircraft and operates much like a mini-cruise missile, albeit designed to distract and deceive enemy air defense systems to protect a strike package. The ADM-160 is powered by a small turbojet engine.

It’s not exactly clear how VALP would operate as a decoy, but there are various options that could be used to spoof enemy air defenses, including simply mimicking the combat flight profiles and signatures of the launch or other aircraft, employing electronic warfare jammers, or even dropping chaff

“The future of aircraft is smaller, more capable, and more affordable,” explained Daanish Maqbool, CEO of Wave Engine. “The aviation industry has long been stymied by the lack of high-performance engines for small aircraft, and we are here to break through this barrier.”

Clearly, the engine is the major focus of this effort, and it could be spiraled out to other projects if it works as anticipated.

Generally speaking, pulsejet technology has been around for a long time and was used to power Nazi Germany’s infamous V-1 flying bombs, or “buzz bombs,” early cruise missile that were used to attack targets in the United Kingdom and elsewhere in the final months of World War II.

A pulsejet — so-called because its combustion occurs intermittently, in pulses — has few or no moving parts, in contrast to a conventional jet. Fuel and air are combusted within a simple hollow tube, and hot gases are pushed out of the back to produce thrust. This confers on them the advantages of simplicity and light weight, but on the other hand, they traditionally have a poor compression ratio, which limits their power output. They are also typically very loud.

Exactly how Wave Engine has updated the basic technology to meet modern needs is unclear, but a company statement talks about “jet performance” and confirms that its pulsejet uses Full Authority Digital Electronic Control (FADEC), in which a computer controls engine performance. On its website, the firm claims that it can now offer Thrust Specific Fuel Consumption (TSFC) that’s “competitive with turbine (jet) engines.”

“Wave Engine Corp.’s technology enables an order-of-magnitude reduction in the cost and complexity of jet propulsion, making it practical for a wide variety of aviation platforms for which jet propulsion was previously cost-prohibitive,” the company says.

Ultimately, it would be imagined that the company is seeking to achieve the kinds of efficiency and power that would be possible using a turbine engine. These have many moving parts and are more expensive but are the powerplant of choice for many high-performance drones as well as cruise missiles.

The company’s pulsejet technology has already received investment from the U.S. military, with a $3-million award from the Defense Advanced Research Projects Agency (DARPA) in 2019 that led to successful flight demonstrations last year. These involved a pulsejet mounted above the fuselage of a manned glider.

Clearly, if the pulsejet proves itself in a decoy, there is potential to migrate the same technology into other vehicles, such as drones or cruise missiles. The low cost of these engines would make it especially suitable for missiles as well as attritable drones that are not necessarily expected to complete more than one mission.

Indeed, while Wave Engine says the VALP is intended “primarily as a decoy,” its name alone indicates there is scope to further develop the same platform to fulfill other roles, as well. The company also provides concept art of a notional fixed-wing combat aircraft, seen below, as well as vertical takeoff and landing (VTOL) applications, on its website.

Ultimately, the pulsejet-powered VALP might have more in common with in-development weapons such as Gray Wolf, an Air Force program for a low-cost cruise missile, in this case, powered by a miniature turbine. Again, Gray Wolf is intended to be low-cost and highly fuel-efficient compared to traditional weapons in this class, such as the AGM-158 Joint Air-to-Surface Standoff Missile (JASSM) series.

At the same time, the Air Force is also working on networked swarming under the Golden Horde project. Here, again, there would seem to be some parallels with VALP. The aim of Golden Horde is to demonstrate how different precision-guided munitions, such as the GBU-39/B Small Diameter Bomb and JASSM, as well as MALD, can be networked together, to operate as an autonomous swarm after launch. The swarm could then be used to attack or otherwise overwhelm enemy air defenses. With potentially very large numbers of munitions involved in this kind of cooporative scenario, an option that is cheaper than existing guided munitions could be very attractive.

The return of the pulsejet may come as something of a surprise, but Wave Engine’s latest efforts could be well timed to exploit growing interest not only in air-launched decoys but also the growth areas of low-cost missiles and swarming munitions.

Above all, the simplicity of the design may well make it suitable for a host of expendable applications, as well as providing a cheaper source of power for reusable vehicles.