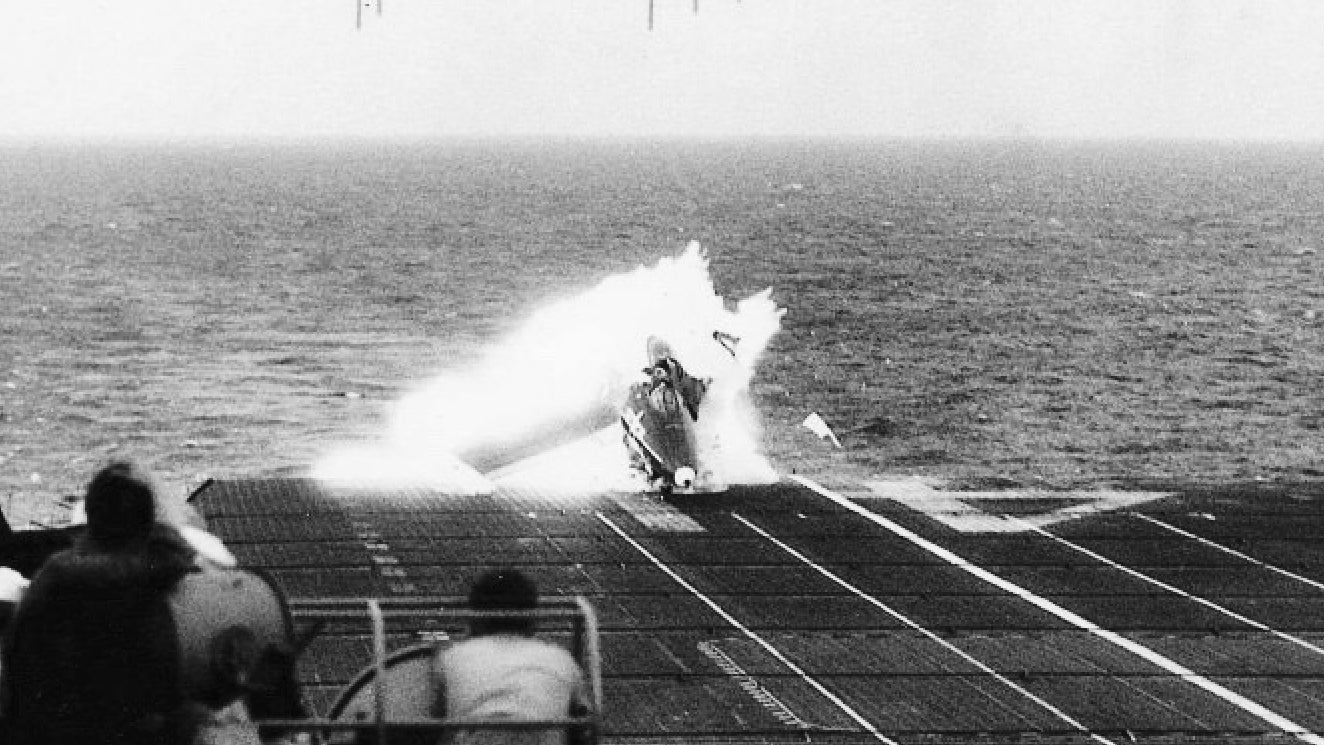 Exactly 70 years ago today, U.S. Navy Commander George Chamberlain Duncan escaped from one of the most dramatic and widely publicized carrier aviation accidents of all time. Watching the footage today, it’s almost miraculous that the naval aviator, a two-time World War Two ace, was pulled from the blazing hulk of his Grumman F9F Panther jet fighter with only burns — and that he would be flying again within six months.

Back in the early 1950s, military aviation was an especially risky profession, even outside of the Korean War, and operating jets from aircraft carriers, which were little changed from World War Two, was especially so. Carrier decks were a lot smaller than they are today and angled decks and steam catapults were only starting to be introduced, as were other features to aid safety for faster, heavier aircraft, such as mirror landing aids.

As of June 23, 1951, Commander Duncan was a test pilot at the Naval Air Test Center in Patuxent River, Maryland, assigned to Fighter Squadron 51 (VF-51), and was proving out the F9F-5 version of the Grumman jet aboard the aircraft carrier USS Midway — a vessel completed at the end of World War Two — during a cruise off the Virginia Capes in the Atlantic.

The F9F-5 was the latest version of the straight-wing Panther, which had first flown in 1949 and soon bore the brunt of Navy and Marine Corps jet fighter operations during the conflict in Korea. Having been moved onto the carrier by crane, Duncan’s assigned F9F-5, Bureau Number 125228, successfully launched, and then recovered, aboard the Midway on the first attempt.

On the second attempt to land, Duncan was expecting to catch the third arrestor wire when an apparent downdraft suddenly interrupted the approach, just feet away from the end of the deck. The Panther sunk below the level of the flight deck as the pilot pulled back on the stick in an effort to recover.

It seems Duncan probably did just enough to avoid slamming into the stern of the warship. Still, an instant later, the jet had impacted the edge of the deck, known as the round-down, and was torn in two, breaking apart behind the cockpit, and bursting into flames in the process.

With Duncan still strapped into the cockpit, the forward fuselage of the Panther hurtled down the wooden deck of the carrier, rolling over several times as it went. The other half of the jet, including the engine and wings, meanwhile continued after it, spewing colossal flames in the process.

By the time the front end of the jet had skidded to a stop, Duncan’s helmet had been torn off, but he was alive, albeit burnt. Deck crew pulled him out of the cockpit and brought him to the sickbay, where his injuries were found to be limited mainly to scorched ears.

Since cameras were recording the incident, Duncan’s crash became a familiar learning aid for other naval aviators and went onto find a much wider audience, too, after it was used in films including Korean War drama Men of the Fighting Lady (1954), Midway (1976), and even The Hunt for Red October (1990). In the latter, the 1950s-era Panther stood in for the considerably more modern F-14 Tomcat.

Duncan’s later career saw him command VF-51 and Carrier Air Group Five during the Korean War, head up VF-101, and then captain the aircraft carrier USS Ranger. He finally retired from the Navy in 1968 and, after working as a lawyer, he died of natural causes in December 1995, aged 78.

As for the Panther, it survived in frontline service until 1956, having also provided the first jet equipment for the Blue Angels demonstration team, and continued to perform second-line duties into the early 1960s, by which time much more capable equipment was available to operate from a new generation of carriers tailored for them.

The F9F ramp strike was just one of several crashes that George Chamberlain Duncan survived during his peacetime career as a naval test pilot. His was a dangerous job at a time when all kinds of technological and performance barriers were being pushed, extracting a heavy toll on aviators’ lives. While carrier operations today are much safer in comparison, Duncan’s accident continues to remind us that in this unique working environment things can still go wrong in a fraction of a second.