Navy adversary squadron VFC-12 has unveiled a newly painted F/A-18E that looks like a Su-57 Felon as it commences the overhaul of its fleet. 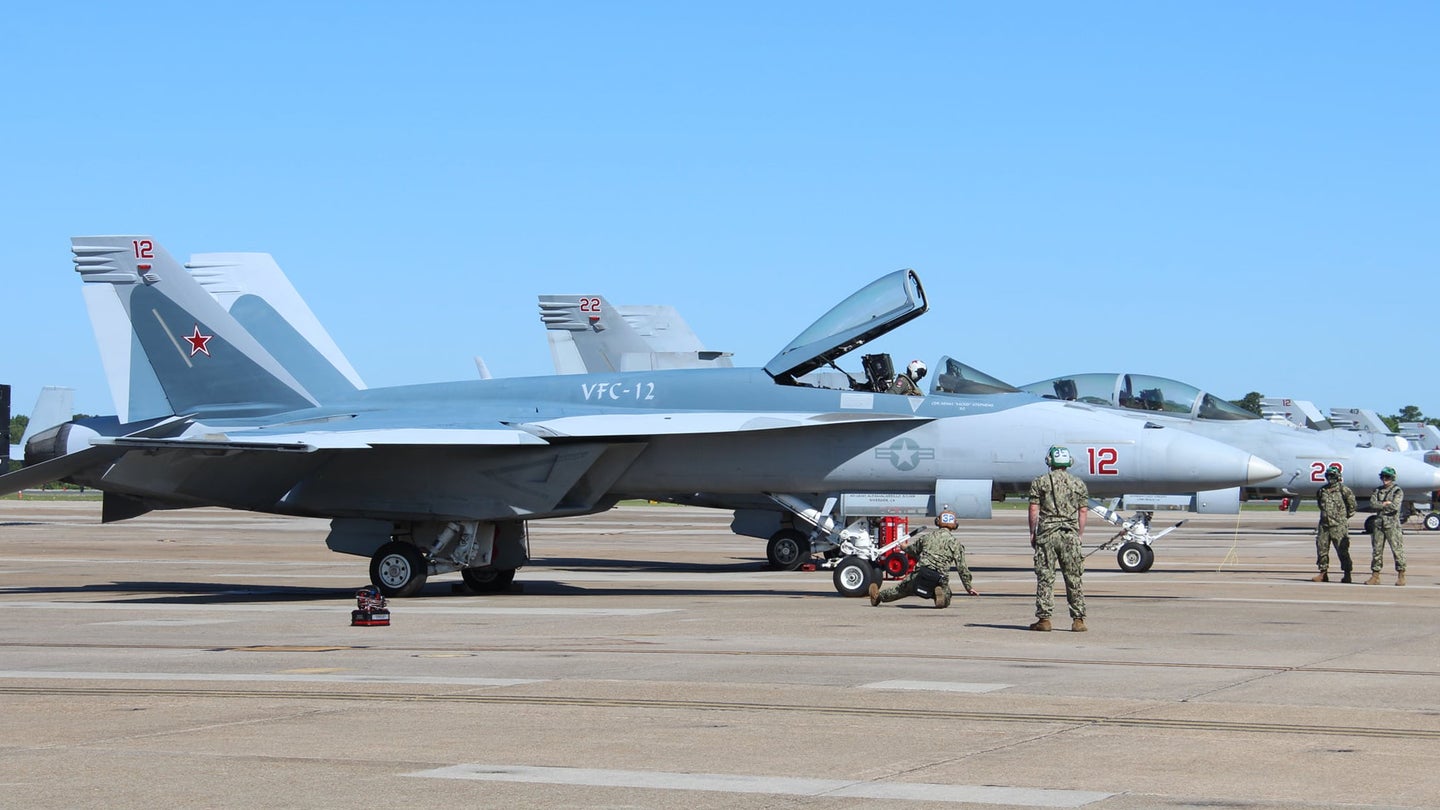 The U.S. Navy’s plans to overhaul its adversary aircraft fleet have taken a significant step forward with the introduction of the first three Super Hornets to Fighter Squadron Composite 12, or VFC-12, which is home-based at Naval Air Station Oceana in Virginia. Known as the “Fighting Omars,” this unit is one of four specialist adversary units within the Navy with the task of replicating enemy fighters and their tactics.

The War Zone was first to reveal plans for VFC-12 to upgrade from the “classic” Hornet to the F/A-18E/F Super Hornet, and subsequently unveiled some of the incredible paint schemes by Grant Little that the unit has planned, which you can see here.

An F/A-18E painted to replicate a Russian Sukhoi Su-57 Felon is the first of the new adversaries to be revealed at the squadron, whose radio callsign in “Ambush.” This scheme is known as “Mako” within VFC-12 circles, and it draws upon a camouflage that first appeared on the fifth production Sukhoi Su-57, and was reportedly known as the “White Shark” scheme in Russia. At least two other Su-57s have also worn this eye-catching finish.

The “Mako” F/A-18E was first revealed during a change-of-command ceremony on June 18 at NAS Oceana when CDR Scott “Cawk” Golich assumed command of VFC-12. This particular jet also carries the name of the new CO under its cockpit. VFC-12 has told The War Zone that the next paint job will be the three-tone “Sierra” scheme, one of our favorites that Grant Little cooked up for the squadron, and that the jet should be revealed soon.

In the past, VFC-12 has applied some dazzling schemes to its Hornets, which enables them to look the part as simulated enemy opponents. The schemes tend to be based on camouflage patterns from potential threat nations, but one of the main aims is to simply make them look different to regular gray fleet jets. Fighting dissimilar types is a critical factor in ensuring fleet aircrews are able to meet the challenges of taking on an opponent with unfamiliar flight characteristics.

With the majority of the Navy strike fighter fleet being composed of Super Hornet squadrons, making VFC-12’s F/A-18E/Fs look visually different is an important part of their adversary remit. VFC-12 pilots will also be charged with flying them in a manner that replicates enemy procedures, so while the airframes are the same, a fleet aircrew can expect anything but a regular tussle with just another Super Hornet.

VFC-12 expects to be “transition complete” from the F/A-18A+ and F/A-18C/D to the Super Hornet by next month, but it won’t receive its full complement of “new” jets until the fall.

The “Fighting Omars” are receiving early Block I Super Hornets passed down from fleet units as the first in a series of moves to upgrade and modernize the U.S. Navy’s “in-house” adversary assets that are flown by the Tactical Support Wing (TSW), a wing belonging to the Naval Reserves. VFC-12 becomes the first Navy unit to operate the Super Hornet in the adversary role, although the Naval Aviation Warfighting Development Center (NAWDC) at NAS Fallon, Nevada, already operates them as aggressors for “bandit” threat training.

The Navy plans to remove the “legacy” Hornets from the last adversary unit to operate the type by 2022 in a bid to streamline its overall fleet and retire the high-flight-hour and expensive-to-operate original variants of the Hornet. NAWDC is one of the final operators of the C/D variants, as is VFA-204 “River Rattlers,” another TSW Hornet unit, which is stationed at Naval Air Station Joint Reserve Base  New Orleans, Louisiana. The retirement presents the Navy with a problem, because the Hornets provide the high-end adversary training required by fleet units and the likes of Topgun.

While VFC-12 is receiving Super Hornets, there are insufficient numbers of these fighters available to restock all of the adversary units for the high-end adversary role. Therefore, the Navy is looking to acquire 26 F-16 Vipers from surplus U.S. Air Force stocks. The F-16s appear in the Fiscal Year 2022 budget request and you can read all about the plans here.

In a big shake-up of the TSW adversary framework, VFC-13 “Fighting Saints” at NAS Fallon in Nevada will likely receive these F-16C/Ds in order for them to operate them alongside the 15 F-16A/Bs currently attached to the co-located NAWDC, which are primarily flown by Topgun and Strike instructors. In turn, VFC-13’s F-5F/Ns will be moved to join VFA-204 “River Rattlers.”

The addition of F-16s within the VFC community adds the all-important aspect of a dissimilar type for fleet pilots to go up against. They will complement Super Hornets in the adversary role, as well as the small number of F-35Cs that have now been assigned to NAWDC.

The arrival of Super Hornets on the flightline at the “Fighting Omars” is the first clear sign of the big shake-up in specialist navy adversary units that is now taking place. The “Mako” F/A-18E is the first of what could be a dazzling array of stunningly painted Super Hornets if VFC-12’s plans are anything to go by.

As soon as The War Zone gets the heads-up, we’ll be sure to show off the “Sierra” Super Hornet once it is on the line at the “Fighting Omars.”

The formation included one jet from each of the Navy’s reserve squadrons that belong to the Tactical Support Wing.