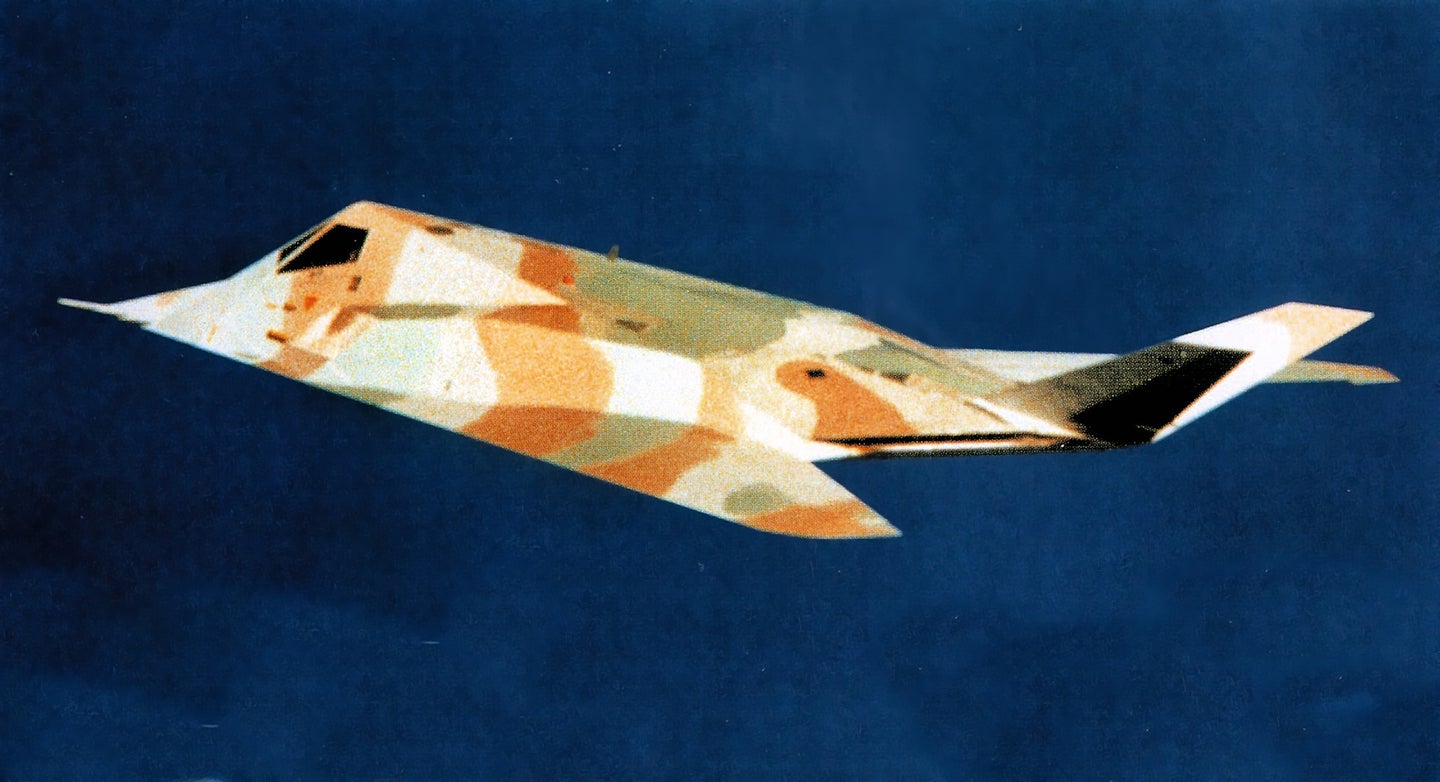 Forty years ago, to the day, the famous “Black Jet,” the Lockheed F-117 Nighthawk stealth attack aircraft, took its first flight. Its technological prowess, combat achievements, and radical looks mean the iconic plane is now firmly part of the public consciousness. However, when Skunk Works test pilot Harold “Hal” Farley Jr. carefully lifted the first prototype YF-117 off into the skies over Area 51 on June 18, 1981, that particular jet had a very different appearance.

That YF-117, serial number 79-10780, also known as “Ship One,” was the first of five full-scale development aircraft (FSD). It took to the air painted in a disruptive three-tone “pastel” camouflage pattern, comprising light tan, light moss green, and a darker tan, with three different shades of each color, as is seen in the photo at the top of this article. However, the aircraft had been in a gray color when it was secreted into Groom Lake from the Burbank production facility aboard a C-5 Galaxy airlifter.

Remarkably enough, considering the secrecy that surrounded the program, the initial flight tests were conducted in daylight. “When I interviewed Alan Brown, then the head engineer on the F-117 program, he told me that even though there are persons at Area 51 performing all sorts of required work, most were not cleared to know anything about the 117,” author James Goodall explained to The War Zone. “Alan said that they knew they couldn’t keep it from being seen from time to time, so they figured if they camouflaged it using three desert colors — light tan, light moss green and a darker tan, and three different shades of each color — the pattern would make it very difficult to make out the true shape of the F-117. Alan said that is why Have Blue had that type of scheme, to make it very difficult to make out the correct shape.”

A similar camouflage pattern had previously been applied to one of the pair of Have Blue demonstrator aircraft that preceded the F-117 and which proved many of the concepts of the later design. Most importantly, the Have Blue jets showed that the company’s exotic “Hopeless Diamond” faceted design was actually feasible.

As for the first YF-117, this camouflage scheme was only worn by 79-10780 and then only for 10 flights. It then gave way to an overall light gray scheme, which was reportedly found to be much more effective for concealing the jet both on the ground and in the air. Other changes made to Ship One during the course of its career included the addition of larger tailplanes after the originals were found to not provide the required stability and control authority during flight.

Ultimately, all five of the full-scale development machines received the gray scheme and it seems that Lockheed at one point envisaged that all production aircraft would be painted the same way, too. Ship One also got a red wingtip for a period of time in the winter of 1983-84. According to Chris Webb, a radar cross-section and performance analyst, the aircraft’s wing was modified with a sawtooth extension in an effort to help attenuate problematic wingtip votices and improve low-speed handling and landing approach speeds. This modification was never adopted despite showing promising results, potentially due to to its impact on the aircraft’s tiny radar cross-section. Still, it was a unique paint arrangement that gave the F-117 a bit of red flare.

In any event, the Air Force intervened and determined that all of the F-117s should be painted black. All were repainted accordingly, including the FSD aircraft. The boss of Tactical Air Command (TAC), General Bill Creech, reportedly preferred black since it concealed the faceting better in daylight. “You don’t ask the commander of TAC why he wants to do something. He pays the bills,” Rich recalled. “The Skunk Works plays by the Golden Rule: he who has the gold sets the rules! If the general had wanted pink, we’d have painted them pink.”

The FSD jets were used to test out all aspects of the aircraft’s planned operations, including weapons release from the internal stores bay, and evaluating the aircraft’s all-important radar cross-section. For the latter, they were flown against both Soviet-made air defense systems and a variety of fighter jets.

While the two Have Blue jets were lost in crashes, the five FSD jets were altogether more fortunate. During their careers, they were known to ground crew at Groom Lake as “Scorpions,” after the fearsome arachnids that inhabit the Southwestern United States. The name proved popular with the pilots, as well, and they adopted the name “Baja Scorpions” as an unofficial moniker for their unit and its pilots. Meanwhile, the FSD aircraft were dubbed “Scorpion 1” to “Scorpion 5” and received appropriate scorpion insignias behind the cockpit, plus individual markings inside the weapons bay doors.

The FSD aircraft all survived the early test program and the last three continued to perform trials work into the early 2000s. The first two of these historic jets, 79-10780 (Ship One) and 79-10781 (Ship Two), enjoyed shorter careers before they were preserved for posterity.

Ship One, now painted black, and made to look more similar, externally, to the series-production F-117 aircraft, was put on display at Nellis Air Force Base in Nevada, where it resides on a pole at a location that continues to play a central role in the Nighthawk story. Its sister jet, Ship Two, is in the collection of the National Museum of the U.S. Air Force at Wright-Patterson Air Force Base in Ohio.

As for the changing colors of the Black Jet, there were other, one-off, and even unofficial schemes applied to F-117s during the type’s illustrious career. To welcome the F-117 into service, in late 1983, 79-10782 was painted with Stars and Stripes emblazoned across the underside and appeared as such at the unveiling of the type to high-ranking officials at Groom Lake in December that year. There are few pictures or video of this aircraft with this paint scheme, which is not surprising given how heavily classified to the program still was at that point.

Perhaps the most outrageous Nighthawk scheme was one called “Toxic Death,” which was applied to the stripped-down Ship Two when it was flown into retirement at Wright-Patterson in 1991, after 437 test flights. Ahead of its preservation, the jet had its black paint and volatile stealth coatings removed and was then sprayed with graffiti, which it displayed only briefly, in an episode you can read all about here.

Elsewhere in the career of the F-117, several further examples ended up returning to the gray scheme that had proven so effective in concealing the aircraft in the daytime during the early days of the program. The aforementioned 79-10782 adopted gray colors under the Evening Shade program that ran during the latter half of 1993, and was apparently tasked with reducing the conspicuity of the aircraft when parked on the ground, although the Air Force ultimately decided to stick with the black paint job. According to Paul F. Crickmore’s

Another oddity around the same time was the half-black, half-metallic 79-10784, another one of the FSD jets, which was trialed under the Senior Spud program in July 1993. Over the course of four test flights, these metallic areas were apparently used to evaluate ways of reducing infrared signature, Paul F. Crickmore records, with the jet flying together with the NKC-135A Flying Infrared Signature Technology Aircraft (FISTA). It’s not clear how successful that was, but, in terms of visual signature, the metallic panels made the jet highly conspicuous in the daytime, at least. Similar testing continues to this very day, including using other surrogate aircraft.

In late 2000, a pair of F-117s appeared outside Palmdale apparently wearing a semi-matte white finish over most of the aircraft, the reasons for which have never been fully explained. The jets were from Holloman Air Force Base in New Mexico but were assumed to be undergoing some kinds of tests at Edwards Air Force Base, California.

Subsequently, 85-10835 from the 53rd Test and Evaluation Group’s Detachment 1 appeared in the so-called Gray Dragon paintwork and was tested at Holloman Air Force Base, beginning in late 2003. This scheme was again tested with a view toward optimizing the jet for daytime operations.

“The chief of staff wants to have a 24-hour stealth presence over future battlefields,” explained Lieutenant Colonel “Buck” Rogers, then the operations officer for Detachment 1, at the time. “We know our current black paint scheme wouldn’t be a good color for daytime operations.” At least one more jet, 79-10783 also wore the two-tone gray paint scheme around the same time.

Between them, these two aircraft helped give the F-117 an appropriate sendoff as its frontline career came to a close. But as we are now well aware, the story of the Nighthawk is far from over and “Black Jets” still fly today, with signs that their intriguing post-retirement operations are becoming more widespread and somewhat less reclusive in nature. On at least one occasion in recent years, an F-117 has been noted flying with portions of its airframe either unpainted or perhaps due to tests of radar-absorbent material (RAM) or infrared signature applications, which are known to be part of its current work.

It’s amazing to think that F-117s have been gracing the skies now for four decades. The fact that they remain increasingly active long after their retirement is a testament to how big of a breakthrough they were so long ago. Case in point, we just got word from our friends over at Dreamlandresort.com that a four-ship of F-117s performed a flyby over Groom Lake this morning, commemorating the legacy of a remarkable aircraft that began 40 years ago with “Hal” Farley’s flight from the same location. The fact that nobody could really see the flyby outside of a select few may be disappointing to many of us, but it is also fitting considering the aircraft was born into extreme secrecy and remains somewhat in the shadows to this very day.

UPDATE: You can hear the audio from the four-ship flyover via Dreamland Resort linked here. Knight callsigns are the F-117s, Sabre is a chase F-16D photoship.

Author’s note: A big thanks to Chris Webb, Rich Cooper, and James Goodall for their help in producing this article.