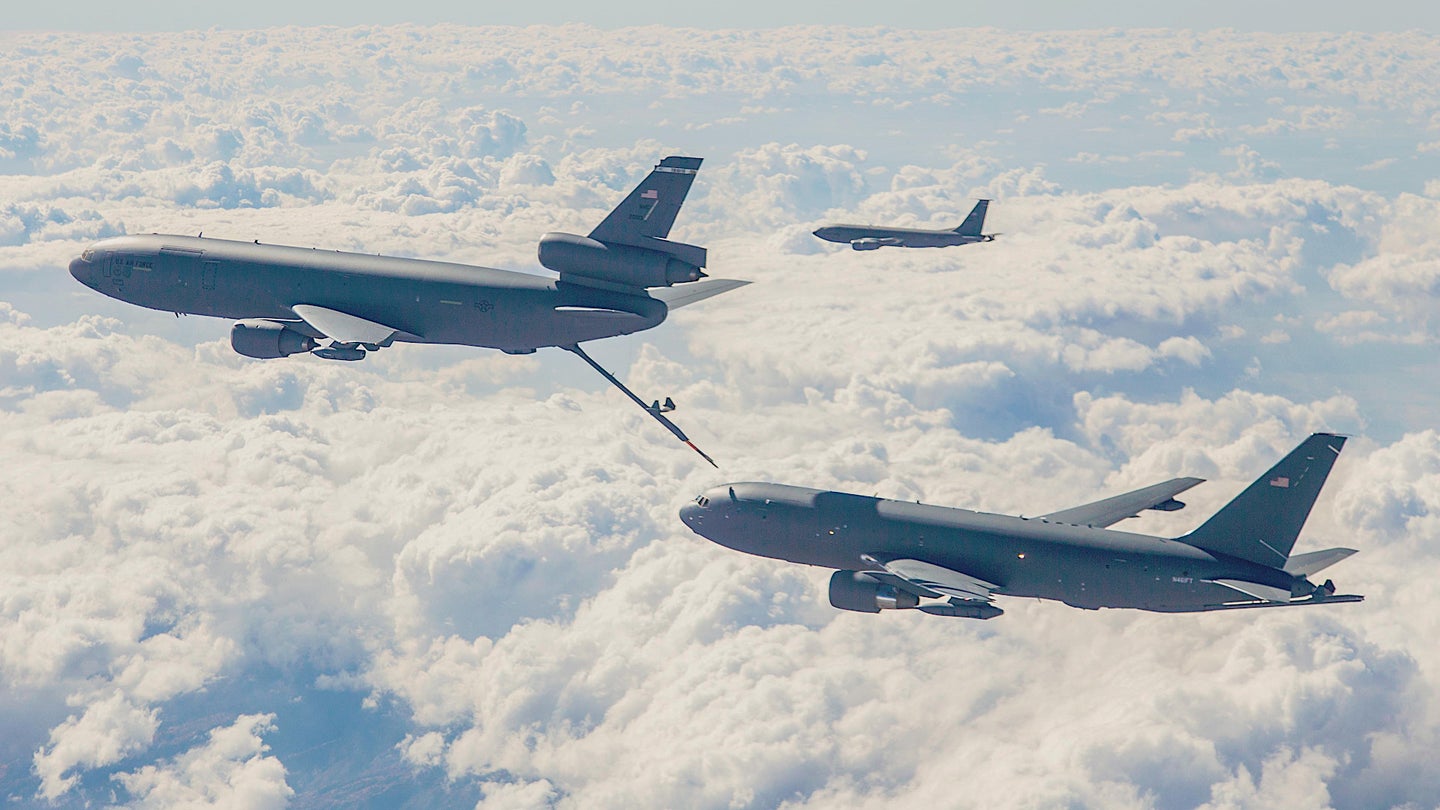 The U.S. Air Force is now officially eying the purchase of additional new-build aerial refueling tankers, either of an existing designed or derived from one. This will help "bridge the gap" between the end of its currently planned purchases of Boeing KC-46A Pegasuses and the fielding of a still largely undefined advanced tanker, also referred to as KC-Z, which could be a stealthy and unmanned design. This comes as major issues continue to plague the KC-46A program, including critical deficiencies that limit the ability of these aircraft to reliably perform their core mission.

The Air Force Life Cycle Management Center announced it had issued a formal Sources Sought notice for the Bridge Tanker Program on June 16, 2021. The service says that proposals must be for aircraft that are "non-developmental" and that are derived from commercial aircraft designs. It expects to issue an actual request for proposals by the end of next year.

"The requirements for Bridge Tanker are currently being defined and the necessary capabilities will be incorporated into the final Request for Proposal once it is validated through the Department of Defense’s joint staffing process," an official press release explained. "Neither developmental stealth nor unmanned capability is planned."

Just today, Boeing announced it had delivered the 46th KC-46A to the Air Force, though the type technically remains in development. Those aircraft are being delivered under a firm, fixed-price contract and, at present, the service's plan is to buy 179 aircraft across 13 production lots, in total. The Air Force expects to order the last KC-46As through this deal in 2027 and actually take delivery of those planes in 2029.

The stated plan is for the KC-46As to replace a portion of the Air Force's existing fleet of just under 400 KC-135 Stratotankers. There has been a question for some time about how the service would go about replacing the KC-135s. Though the Stratotankers are still receiving upgrades, the underlying design will be over 70 years old in 2029 and the aircraft becoming more costly and complicated to maintain.

There are also still questions about what will happen to the Air Force's smaller fleet of 59 KC-10A Extenders, which it acquired in the 1980s. In July 2020, the service started retiring some of the oldest KC-10As and, at the time of writing, official records show that six of them have gone to the Bone Yard at Davis-Monthan Air Force Base in Arizona since then.

As of 2019, the Air Force had expected the KC-Z advanced tanker program to have a design in production by 2027. KC-Z had originally been envisioned as a direct follow-on to the KC-X effort that yielded the KC-46A. As The War Zone

has explored in the past, while the exact requirements for KC-Z have yet to be finalized, it has since already evolved into a much more advanced development project that is exploring novel concepts to support aerial refueling demands, potentially even in contested environments.

There's nothing now preventing Boeing from simply pitching the KC-46A again for this bridge contract. However, the immediate issue facing the Pegasus is that the aircraft, at least in its present form, simply cannot be relied upon to consistently perform its core mission of aerial refueling for a variety of reasons.

Just this month, Air Force Magazine revealed yet another apparently persistent issue that has to do with the software that runs system that controls the refueling boom at the rear of the plane. Unlike in previous Air Force tankers, KC-46 boom operators don't physically sit in a position at the back of the aircraft to perform their task, instead doing so remotely from the main cabin.

The boom software is supposed to allow the operator to select present limits on its travel that are specific to various types of planes that it can refuel via this method. The boom is supposed to pop out of the receiver aircraft if it moves too far up or down or right or left to prevent damage on either end. However, these presets simply do no work and boom operators have to manually enter the appropriate data every time they refuel another aircraft.

That workaround means that the Air Force describes this as a Category II deficiency, which refers to issues that do not technically prevent an aircraft from carrying out its assigned missions. However, it still increases the workload on the boom operators and slows the refueling process down.

"Boom operators said the workaround is not a big deal when there’s just one receiver, such as another tanker or airlifter. However, when there’s a flight of multiple aircraft, such as these four F-16s, the process takes a small amount of time between refuelings," Air Force Magazine reported after one of its reporters went aboard a KC-46A during a major training exercise. "Additionally, if there is just one boom operator on the flight, it takes attention away from this process, an issue that was alleviated in this recent mission by having the instructor handle the resets while the boom operator focused on refueling."

This followed the Pentagon's Office of the Inspector General releasing a report in May that slammed the Air Force for mismanagement surrounding the development of requirements for the KC-46A's boom and its approval of Boeing's design plan. In addition to the issues with the boom itself, the Remote Vision System (RVS) that operators use to link it up with receiving aircraft remains dangerously problematic, as you can read more about here.

The RVS is a hybrid 2D/3D system that pipes video feeds in from an array of cameras at the rear of the aircraft on a flat screen inside the main cabin. Boom operators wear special glasses, similar to those used to watch modern 3D movies or experience other 3D attractions, that are, in principle, supposed to provide valuable depth perception. However, still-limited depth perception, as well as shadows and glare, make it difficult for personnel to accurately and safely move the boom relative to the receiving aircraft. In May, as part of Air Force Magazine's reporting, it emerged that the tip of the boom is often not even visible on the screen requiring personnel to try to determine its position based on shadows and general experience with the system.

Boeing and the Air Force have agreed on a plan to develop and integrate an 'RVS 2.0' on existing and future KC-46As, but the system isn't expected to be ready to go into the first Pegasuses until 2023. It's not clear how long it will take to integrate the fix onto all of the service's existing KC-46As or how much time it will take to train boom operators to use it. Until the RVS issue is sorted out, the Air Force only expects to use the Pegasuses for refueling during training or operational missions on an, at best, limited basis.

Other issues have befallen the KC-46s over the years, including recent problems with the installation of a palletized lavatory that causes the contents of the toilets to leak out into the aircraft, though some of them have been resolved. Quality control issues have also led the Air Force to stop accepting deliveries of the tankers from Boeing on multiple occasions in the past. In January, the company acknowledged that the program had seen total cost overruns in excess of $5 billion, more than the value of the original contract award. Due to the firm, fixed-price nature of that deal, Boeing has had to eat the majority of these losses, though it has secured some additional funding in instances where the Air Force has accepted that certain fixes to the aircraft exceed its original requirements.

Even before production started, the KC-46A had already been party to a decades-long saga of Air Force attempts to purchase new tankers. One initial attempt to acquire new aerial refueling planes in the early 2000s ended in a massive scandal that saw Darleen Druyun, who had been the Principal Deputy Undersecretary of the Air Force for Acquisition, convicted on corruption charges and sentenced to nine months in federal prison.

The first KC-X contract, which a team consisting of Northrop Grumman and what was then known as EADS won in 2008 after beating out Boeing, was subsequently canceled. Their offering was a militarized Multi-Role Tanker Transport (MRTT) variant of the Airbus A330 airliner. Boeing then won the rebooted competition in 2011 with its KC-46A. Had the Northrop Grumman/EADS team won again, the plan had been to build those tankers, known as KC-45As, at a plant in Mobile, Alabama. That facility was still established and today it serves as a final assembly point for A220 and A320 airliners.

EADS, which has since evolved into Airbus Defense and Space, has since secured sales of A330 MRTTs to Australia, the United Kingdom, France, South Korea, the United Arab Emirates, and Saudi Arabia. Last year, it also began delivering examples that are now part of a multi-national tanker fleet available to European Defense Agency member states.

Interestingly, in 2018, Lockheed Martin and Airbus announced a partnership to pitch contractor-operated A330 MRTTs to the U.S. military to meet non-combat aerial refueling demands, as well as work together on advanced tanker concepts. The A330 MRTT certainly remains a non-developmental, commercial derivative tanker option that could be now be proposed to meet the Air Force's Bridge Tanker Program requirements. It is, in fact, the only such design equipped with a boom, the Air Force's aerial refueling method of choice, beyond the KC-46A, that is in production now.

There may well be few, if any other options available. In recent years, Boeing has reportedly blocked approval for third parties to convert its aircraft into aerial refueling tankers in instances where it might threaten sales of the KC-46A. Boeing and Airbus are the only companies that build suitably sized commercial aircraft, to begin with, that could be readily transformed into tankers that would be likely to meet the Air Force's needs.

It's also interesting to note that the Air Force, in cooperation with U.S. Transportation Command (TRANSCOM), has been exploring the possibility of using contractor-owned and/or operated aerial refueling tankers for non-combat activities, such as training or long-range transits, to ease the burden on existing tanker fleets. A number of private companies are already flying boom-equipped tankers. It's not clear how the current Bridge Tanker Program plan may or may not impact those separate efforts, which could provide additional aerial refueling capacity without the need for the Air Force to actually buy new aircraft.

All told, it seems very likely that the Air Force is looking at another showdown between the KC-46A and the Airbus A330 MRTT for this new tanker acquisition effort. It will be interesting to see if any additional competitors emerge, as well.