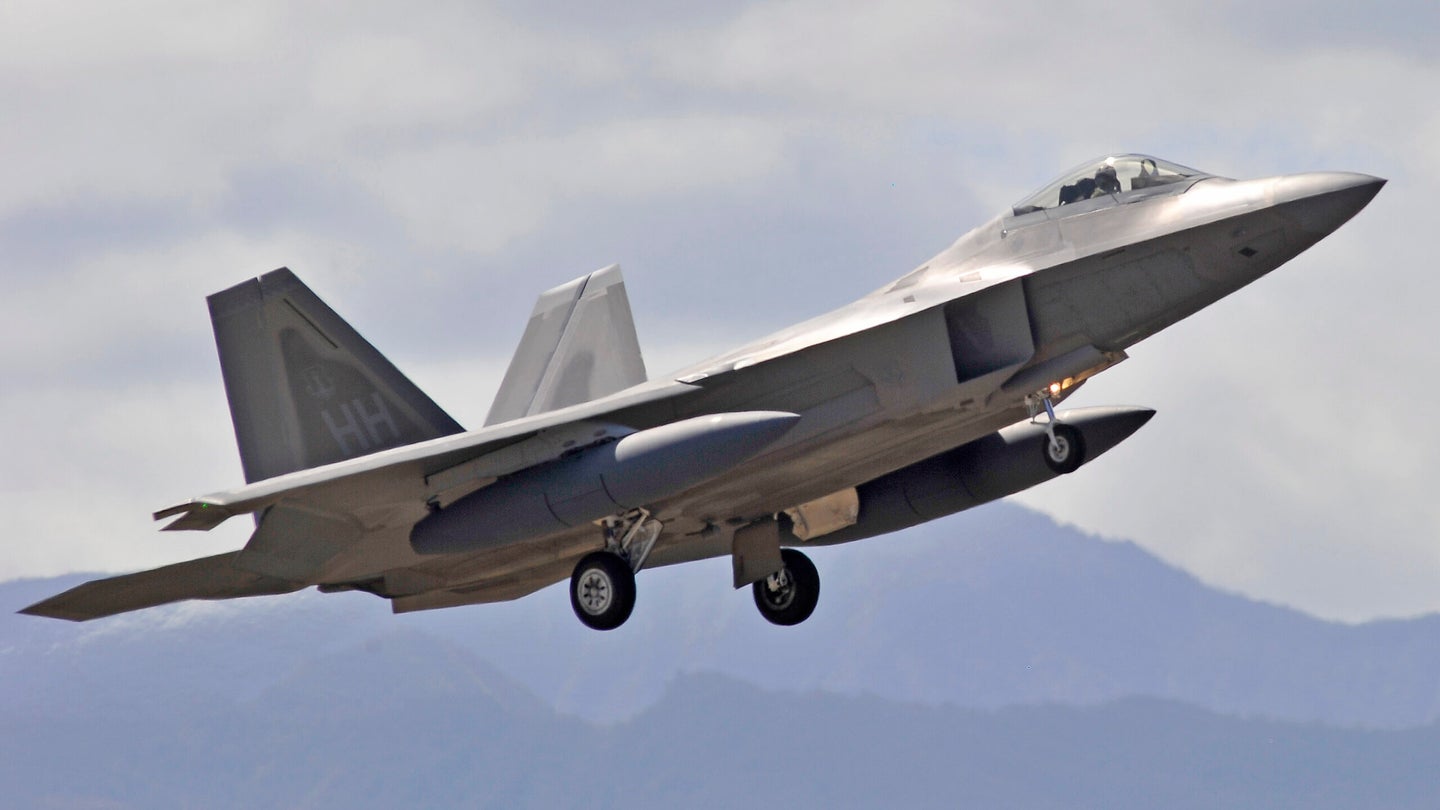 A report has emerged that major Russian naval maneuvers were underway in the Pacific when U.S. Air Force F-22A Raptor stealth fighters were scrambled from their base in Hawaii over the weekend, an incident you can read more about in The War Zone’s initial reporting. The Raptors were supposedly launched to investigate unspecified Russian long-range aircraft, part of a group of naval vessels and aircraft that were participating in a large-scale exercise around 300 to 500 miles west of the Hawaiian islands. The incident came immediately ahead of today’s summit meeting between U.S. President Joe Biden and Russian President Vladimir Putin in Geneva.

The pair of F-22s was launched this past Sunday on an alert scramble out of Joint Base Pearl Harbor-Hickam at around 4:00 PM local time. They were joined by a third Raptor soon after and also had refueling support from a KC-135 tanker during their mission. The reported Russian aircraft that prompted all of this did not enter the Hawaiian Air Defense Identification Zone (ADIZ) at any point and were not intercepted, according to CBS News, which reported this additional information.

U.S. military officials had previously described was described as an “irregular patrol" that was initiated at the request of the Federal Aviation Administration (FAA), but with no immediate indication as to why the jets had actually scrambled. The FAA has since remained tight-lipped, offering little more than the following terse comment in response to The War Zone’s repeated requests for more details:

That situation has since changed somewhat, according to CBS News, which reported that unnamed U.S. defense officials said that the F-22s were indeed responding to aircraft associated with the Russian naval exercise. While it’s not clear exactly why the request came from the FAA, this is not altogether unusual and can be prompted by potential security situations aboard airliners, to providing eyes-on to stricken aircraft or to investigate unidentified aircraft. Nevertheless, a lot of questions remain unanswered.

“As part of our normal daily operations, we closely track all vessels in the Indo-Pacific area of operations through maritime patrol aircraft, surface ships and joint capabilities. We operate in accordance with international law of the sea and in the air to ensure that all nations can do the same without fear or contest and in order to secure a free and open Indo-Pacific. As Russia operates within the region, it is expected to do so in accordance with international law.”

Curiously, INDOPACOM’s statement above, which was sent after The War Zone had separately asked Pacific Air Forces (PACAF) about the F-22 sorties, does not specifically mention the scramble itself and there has been no response from them (or clarification from the FAA) as to how the previously reported FAA request factored in to this. We still have no official on-the-record confirmation of what the F-22s were scrambled to intercept and why it was not actually intercepted.

Meanwhile, the Russian naval drills reportedly included surface ships, anti-submarine aircraft, and long-range bombers, per U.S. military sources, according to CBS News. This suggests that the aircraft that the F-22s were scrambled to investigate may have been one of the long-range bomber types operated by the Russian Aerospace Forces, or perhaps a Russian Navy Tu-142 Bear long-range maritime patrol aircraft.

According to Russian state news agency TASS, a Russian Navy Pacific Fleet flotilla had been recently “practicing command and control of a combined arms task force in operations at considerable distances” and this very likely refers to the vessels that were underway in waters within 500 miles of Hawaii.

TASS reported that this task force covered a distance of 2,500 miles from its various naval bases and that it included the Udaloy class destroyers

Aldar Tsydenzhapov, as well as embarked Ka-27PL Helix anti-submarine warfare helicopters. The TASS story is, however, one of the very few accounts of drills potentially related to the scrambling of the F-22s, which CBS News described in its story as the “largest naval exercise in the Pacific since [the] Cold War.”

In total, the Russian Ministry of Defense said around 20 surface combatants, submarines, and support vessels were involved in the Pacific Fleet exercises, together with up to 20 aircraft.

In recent weeks, a Russian intelligence-gathering vessel has also made its presence felt in waters around Hawaii, with the spy ship sailing just outside U.S. territorial waters to the west of Kauai. The Kareliya was likely on station to monitor the Pacific Missile Range Facility on Kauai, resulting in a delay to the test of a ship-launched SM-6 missile against a medium-range ballistic missile target. The rescheduled test ultimately ended in failure.

The Russian Navy's Pacific drills had also been taking place at the same time that the aircraft carrier USS Carl Vinson (CVN-70) and its strike group were operating around 200 miles off Hawaii. The same carrier came to the attention of The War Zone

earlier this month, when it was off the coast of southern California during a so-called “skyquake” incident caused by a sonic boom. In the end, the culprits turned out to the U.S. Marine Corps.

While the Carl Vinson Strike Group is currently taking part in a pre-planned certification exercise, the location of these drills has been moved closer to Hawaii in response to the significant Russian presence in that part of the Pacific, U.S. officials said, according to CBS News.

The backdrop to this Russian exercise close to Hawaii was, of course, the lead-up to the highly anticipated meeting between Biden and Putin that took place earlier today. There were clear tensions between Washington and Moscow ahead of the summit in Geneva, with Biden this past March having described Putin as a “killer.” That had prompted Russia to recall its ambassador from Washington, before the United States did the same with its ambassador in Moscow.

Today’s meeting ended with the two leaders having agreed to reinstate their respective ambassadors, as well as to resume arms control talks, including possible changes to the New START arms limitation treaty that was extended for five years in February. This deal, as we have discussed in the past, puts limits on the total number of strategic nuclear weapon delivery systems, as well as the warheads that they carry, that each country can possess.

After Biden and Putin's meeting, there was, however, less agreement on other issues, including other items of particular concern to the U.S. administration, namely the increased Russian military presence on the border with Ukraine earlier this year, alleged Russian cyber-attacks against the United States, and Russia’s arrest of opposition politician Alexei Navalny.

These, however, are just the latest points of contention between the two powers, part of a deterioration in relations that has been ongoing for some years now, with significant low points including the Russian annexation of Crimea from Ukraine in 2014 and Russian-sponsored activities in the conflict in eastern Ukraine since then, Moscow’s intervention in the Syrian civil war starting in 2015, and the accusations of Russian interference in the 2016 and 2020 presidential elections in the United States.

A Russian Aerospace Force Tu-160 bomber seen during another recent long-range aviation mission, this time over the Baltic Sea:

Meanwhile, the significance of the Russian exercise to Hawaii is in its demonstration that Russia is increasingly ready and able to conduct long-range naval exercises closer to U.S. territory and interests. In recent years, Russian naval activity has extended from its traditional strongholds in the Baltic and  Black Seas, as well as the North Atlantic, the Arctic, and the Western Pacific. Now, it seems, Russia is also keen to flex its muscles closer to Hawaii. The U.S. state is home to INDOPACOM's headquarters, as well as a slew of other critically important Air Force, Navy, and Marine Corps facilities and assets.

What's so strange about all this is that Russia has made such little noise about what are supposedly historic exercises and the U.S. government hasn't really even mentioned it either, especially considering it is occurring so close to Hawaii's shores. Furthermore, intercepts of Russian strategic aircraft are usually publicized by the U.S. Air Force, and especially so when they are unique in nature. This was anything but the case in this instance. Also, moving a carrier strike group off Hawaii in response to a Russian naval exercise is abnormal, to say the least.

It's possible that the gag on communications has been due to sensitivities around Biden's first meeting with Putin. The possibility of having yet another Russian-U.S. headline to deal with, stacked on top of so many others, may have resulted in a planned deviation in normal communications surrounding these types of episodes. It's even possible that Russia was intending to change the narrative of the summit in order to not have to deal with far more controversial issues on the docket. Then again, there is a lot we still do not know about the incident. Maybe there were other factors at play surrounding Russia's operations near Hawaii and the catalyst that prompted the 'irregular patrol.' As far as we can tell, the details we do have are only based on CBS's sources.

Regardless, the appearance of a large-scale Russian naval task force relatively close to Hawaii is an important reminder that Moscow also has interests in the wider Pacific, as well as delivering a clear message: The Russian Navy can reach out far from home to operate in very close to American territory.

Update, June 17, 8:15 am PST: Rob Lee, whose Twitter feed is well worth a follow for those interested in Russian defense matters, has brought to our attention a video showing a portion of the recent Russian Navy exercise in the central Pacific Ocean. The maneuvers were mainly focused on anti-submarine warfare, so it’s not altogether surprising that it involved three Tu-142MZ Bear-F Mod. 4 long-range ASW aircraft, which reportedly conducted a 12-hour flight from the Kamchatka peninsula. These were almost certainly the aircraft the the F-22s responded to. The video, published on the Russian Ministry of Defense's official television station, TV Zvezda, can be seen in full here.

Without an extension, limits on both countries’ nuclear arsenals will expire next week, which could open the door to a new arms race.