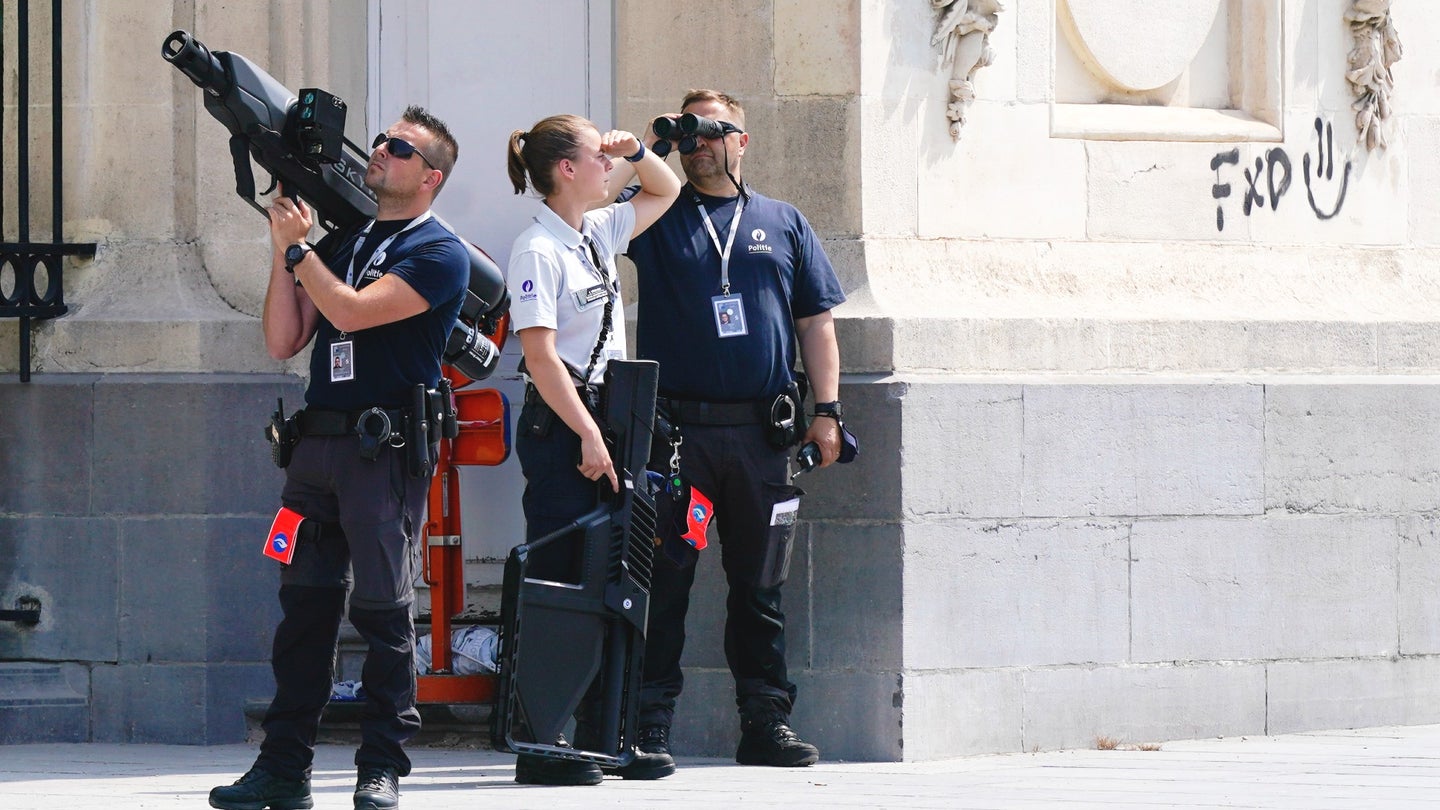 Images shared to social media show Belgian security forces wielding a combination of handheld anti-drone weapons to protect a meeting between U.S. President Joe Biden and King Philippe of Belgium held on Monday, June 14. Two different types of anti-drone systems were carried by members of the Belgian Federal Police, one which fires a net projectile at drones, and another that uses radiofrequency (RF) jamming to disrupt links between drones and their operators. The deployment of these two systems together is a reminder of how serious the threat of drone attacks or even assassination attempts on high-value targets is worldwide.

The meeting between Biden and King Philippe saw the two discuss issues including the coronavirus pandemic, as well as relations between the European Union (EU) and the United States. President Biden arrived in the Belgian capital of Brussels for a summit of the North Atlantic Treaty Organization (NATO) hosted by the NATO Secretary. The summit in Brussels marks the 31st formal meeting of the heads of state of participating NATO nations and was held to discuss “the challenges of today and tomorrow” including: increased Russian aggression and threats posed by cyber attacks, terrorism, and emerging and disruptive technologies. Climate change and “the rise of China" were also on the docket.

One of the weapons seen being wielded by Belgian Federal Police at Biden’s meeting with King Philippe appears to be the DroneGun Tactical made by Australian firm DroneShield. DroneShield claims the DroneGun Tactical can cause drones to “respond via vertical on the spot landing or return to its remote controller or starting point” when successfully disrupted by its multi-band radiofrequency (RF) jamming attack. These types of anti-drone weapons work by severing the command and control links between drones and their operators, and DroneShield claims the DroneGun Tactical can instantly cease video transmission between them. These types of jammers don't work against autonomous systems which do not rely upon RF links with human controllers, although those systems are far less flexible and are usually only capable of targeting fixed points, not fluid targets that are often in motion.

The DroneGun Tactical jammer runs on a rechargeable 14.4V lithium ion-battery and weighs 16lbs when loaded with two battery packs. The weapon is described as having a “robust rifle-style design” and even features Picatinny rails for mounting scopes or other gear. DroneShield lists the U.S. Army, U.S. Air Force, the U.S. Department of Homeland Security (DHS), the U.S. Department of State, and the U.S. Intelligence Community among its customers.

The other weapon seen carried by the Belgian Federal Police appears to be a Skywall Patrol made by UK-based OpenWorks Engineering. OpenWorks describe the gun as a “handheld drone capture system” that uses compressed air to fire nets or a combination net-and-parachute round at hostile drones.

OpenWorks states that the Skywall is a more effective solution to bring down drones than other kinetic solutions because “Conventional weapons often fail to incapacitate a drone and do not offer a proportionate response to the drone threat.” Further, the company writes, conventional weapons “can also escalate a situation when used in the vicinity of large crowds.” In a defense urban environment outside of an actual conflict environment, using any sort of traditional firearms or munitions presents significant hazards to bystanders. In addition, jammers such as the DroneGun Tactical or other anti-drone systems that use high-power microwaves have limitations when used in urban environments, as they could potentially disrupt civilian communications networks or other electronics.

The net and net/parachute rounds fired by Skywall are claimed to be reusable, but it's unclear how many rounds each unit can carry or how quickly it can be reloaded, making it unknown how well the system would be against multiple drones or a drone swarm.

Drones have previously been used in the past in assassination attempts on world leaders, as was the case in 2018 when a drone exploded in the air above disputed Venezuelan President Nicolás Maduro as he gave a speech in front of a large crowd. A stampede ensued, leaving seven Venezuelan National Guardsmen injured. It's possible that this kind of panic could very well be as destructive or more destructive than an initial drone attack itself. In addition, small, off-the shelf drones are already being armed with small explosives and used to assassinate enemies of drug cartels in Central America.

Multi-layered drone defenses have been tested by DARPA recently, who recently demonstrated a vehicle-mounted system that can rapidly deploy a combination of high-power microwave and kinetic capture weapons designed to disable drones without destroying them outright. By bringing these drones to the ground intact, these systems allow investigators to forensically examine hostile drones and potentially identify their origin or better assess the risks they pose, enabling the development of more precise countermeasures to defeat them.

It's important to note that the particular mix of net projectiles and jammers seen in Brussels are really only useful against low-density, very low-end threats, such as a single quadcopter, and would not be highly effective against a drone swarm or against more advanced types of unmanned aerial vehicles, including small fixed wing types that travel at greater speeds and can be autonomous in nature. It's also worth mentioning we don't know what other anti-drone systems may have been providing cover for the meeting.

Nevertheless, the combination of the two weapons seen carried by Belgian Federal Police in Brussels makes for something of a very low-end layered drone defense of sorts, one that could quickly respond to simple threats while remaining portable enough to be used by roving security details. In the future, far more advanced defenses—likely including RF jamming, kinetic systems, and directed energy weapons—will need to be layered into the equation to adequately defend against rapidly proliferating far more capable drones that would be employed en-masse during an attack.