Pipes for dumping fuel are more commonly associated with fixed-wing aircraft, but have a niche role on the Special Operations Chinook, too.

Photos of the highly modified MH-47 Chinooks of the 160th Special Operations Aviation Regiment, or 160th SOAR, the famous Night Stalkers, are almost always worthy of attention. These highly-capable aircraft are frequently noted with different modifications cropping up around their airframes, some of them more mysterious than others. Some recent imagery of 160th SOAR MH-47s released by the U.S. Department of Defense brings to light one little-known feature of the U.S. Army’s extensively customized Chinooks — pipes for safely dumping fuel in flight.

The pipes are visible in some of the shots, protruding prominently from the rear of the huge sponsons fitted on each side of MH-47's fuselage, which are enlarged compared to the ones on standard Chinook and that contain additional fuel within Nomex honeycomb cells. These tubes are deployed using a pneumatic extension mechanism and are generally not seen, perhaps simply because they are retracted or possibly because they might not always be fitted. That is certainly true for the characteristic inflight refueling probe on the front of the helicopter, which is not a permanent fixture, but is often installed on these helicopters.

Fuel dumping is, of course, a familiar part of fixed-wing aircraft operations, both military and civilian, and is used to jettison the volatile liquid to lighten the aircraft for landing, or in various different emergency situations. Look closely around the rear end of a range of military aircraft and you may well see a fuel dump pipe and some types have even used the jettison function together with afterburner to create crowd-pleasing pyrotechnics.

A fuel jettison pipe on a helicopter, however, is far less common. The main reason for this is that, taking off vertically, if a helicopter loaded with fuel can lift itself into the air, it can very likely touch down again with a similar load, even if very little fuel has been burnt. The exception could conceivably be a helicopter rolling takeoff, where forward speed provides additional lift and can allow liftoff at higher weights. However, in that scenario, a heavily loaded helicopter could also get back to the ground safely using a rolling landing.

In the case of the MH-47, however, the situation is a little different. These helicopters are already renowned for their high-altitude capabilities and this is combined with the ability to take on more fuel in flight — at least, when the telescopic refueling probe is fitted.

Operating at high altitude, where the rotors generate less lift in the thinner air, is a perennial challenge for helicopters, even those with the power of an MH-47. With this in mind, there is sometimes very good reason for the crew to want to lighten the fuel load.

Flying below 200 feet above ground level (AGL), “nap-of-the-earth” (NOE) ingress and egress routes, and wearing NVG in zero/zero conditions for those long hours placed tremendous stress on the MH-47E pilots. To minimize the effectiveness of the enemy AAA (guns and missiles) in the high mountains, the MH-47E pilots flew extremely narrow corridors between the mountains, which reduced left and right limits of error to 200 meters, causing the airmen to refer to the flight route as the “line of death.” Larger-capacity portable oxygen systems were required for aircrews flying higher and longer than ever before. The variable weather conditions in and around the high mountains further complicated flying. The seldom-used fuel dumping capability enabled the MH-47Es to carry more weight and still clear the initial barrier of K2 mountain ranges, but it meant another aerial refuel before entering Afghanistan.

So, to clear some of the bigger mountains in the areas where they operated in Afghanistan, MH-47s would jettison fuel, lightening their loads to improve high-altitude performance. Once on the other side of the mountain, they would top up from an MC-130 tanker, allowing the choppers to continue their long-range mission.

With that in mind, it’s possible that these fuel jettison pipes are only seen deployed on MH-47s when it’s known they are being called upon to fly at high altitudes. That seems logical and there actually might only be a few other scenarios when they would be required. Indeed, the recently released photos showing the MH-47s with the pipes visible were taken during the African Lion 2021 drills, which are still ongoing now in Morocco, Tunisia, and Senegal. North Africa’s highest mountain range, the Atlas Mountains, includes stretches in Morocco and Tunisia, as well as Algeria.

As for dumping fuel in emergency situations, if the Chinook were to lose an engine, for example, while carrying a heavy load, its crew could likely perform a running landing safely enough before losing too much power. The exception would be if there’s no room for a running landing — such as a when touching down on a pad on a ship. This brings us, suitably, to another sequence of photos that show some of these special operations Chinooks with fuel jettison pipes flying from the deck of the Expeditionary Sea Base USS Hershel “Woody” Williams, in the Atlantic during the same exercise.

The Williams is the second of these Expeditionary Sea Base ships and is assigned to U.S. Africa Command, or AFRICOM. The vessels have a flight deck with four helicopter spots as well as a reconfigurable mission deck that can be used to launch small craft and unmanned vehicles. In the past, we’ve also seen Chinooks with standard sponsons and not fitted with the fuel dump pipes on Williams’ sister ship USS Lewis B. Puller (ESB-3), too, so they don’t seem to be a prerequisite of these types of operations.

Without doubt, the MH-47s remain some of the most enigmatic aircraft in the U.S. Department of Defense inventory and they have no shortage of advanced and sometimes exotic equipment with which to complete their demanding missions. The ability to rapidly dump fuel via a set of elongated pipes is just another tool in its special operations toolbox. 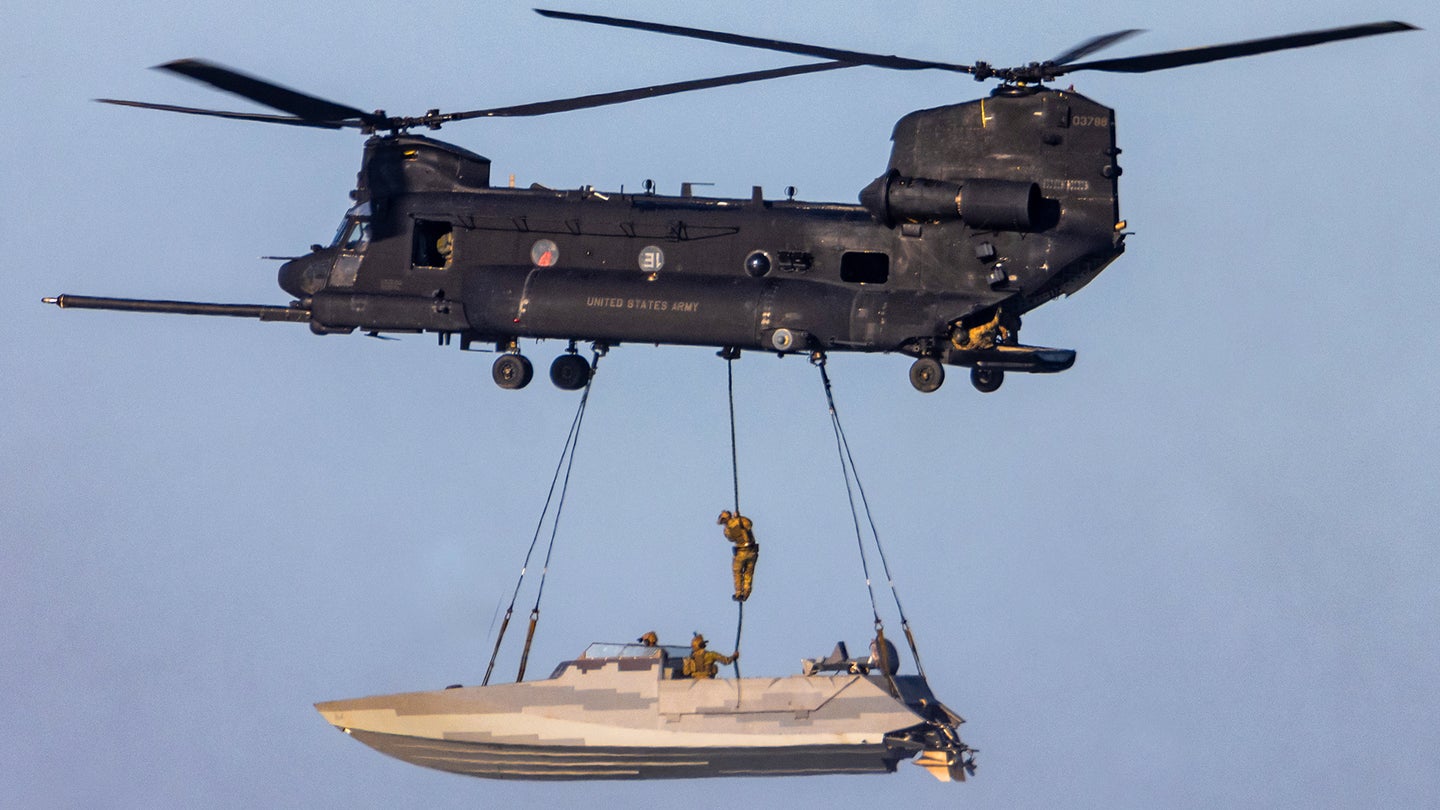 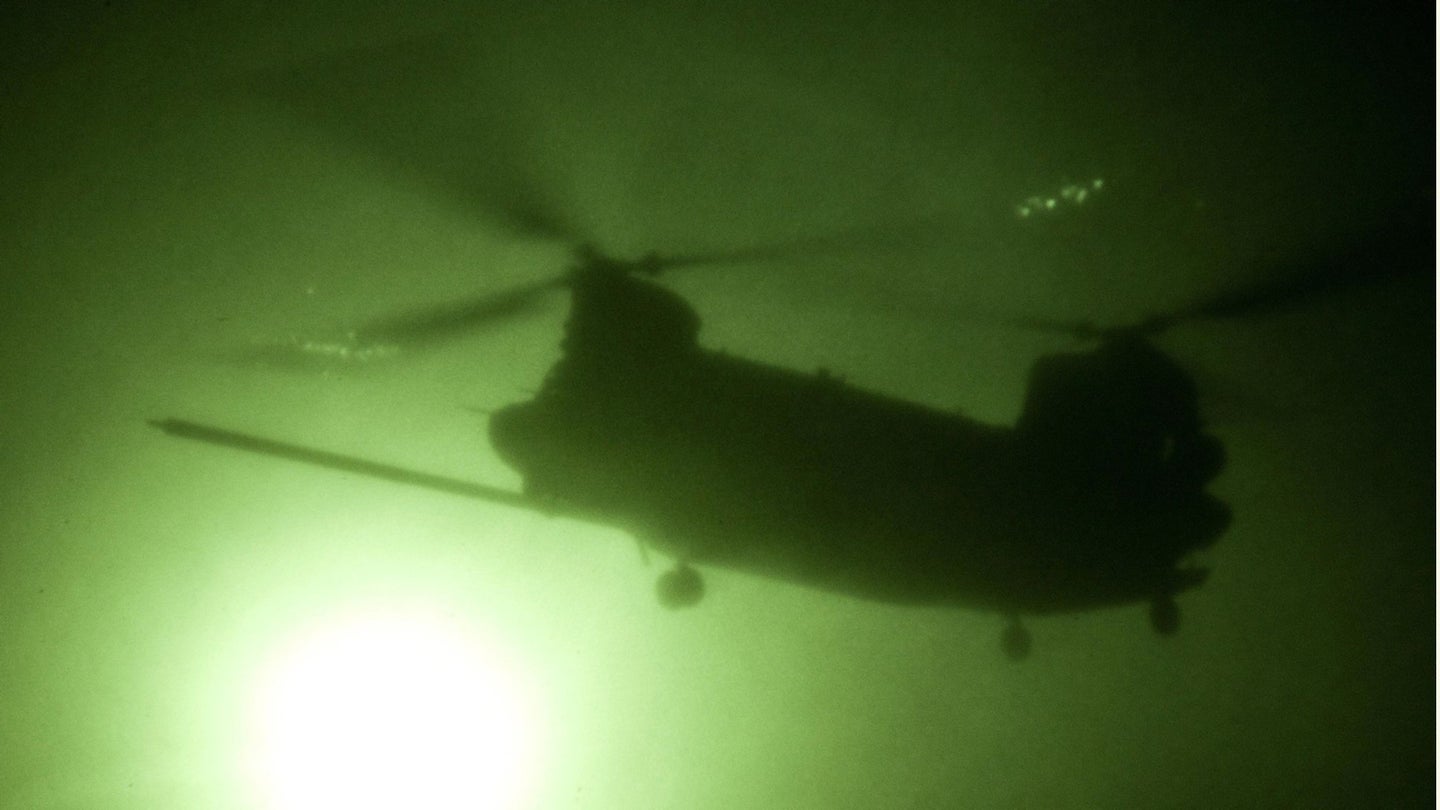 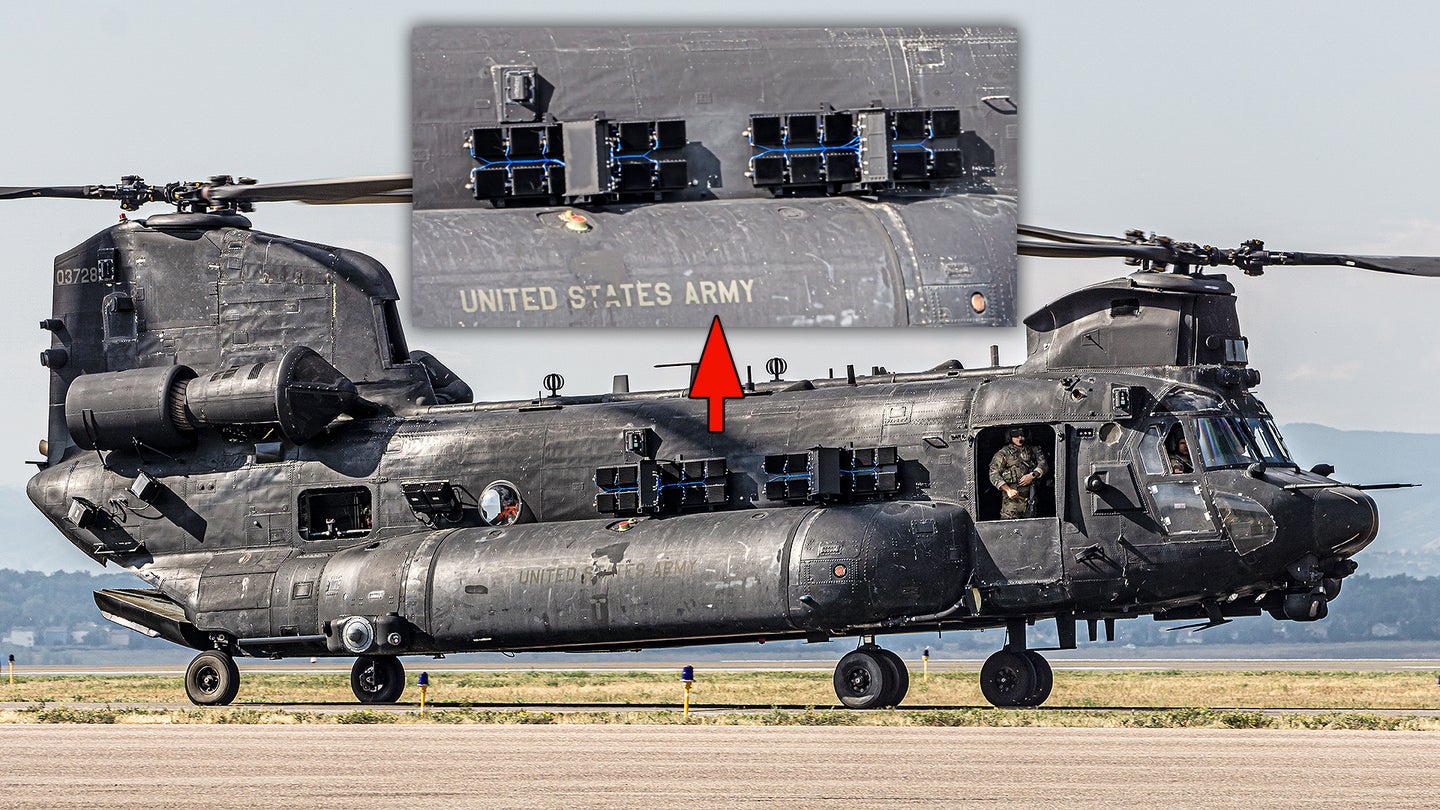