Heavily armed and capable of speeds in excess of 60 knots, the Project 1240 Uragan was destined to remain a one-off. 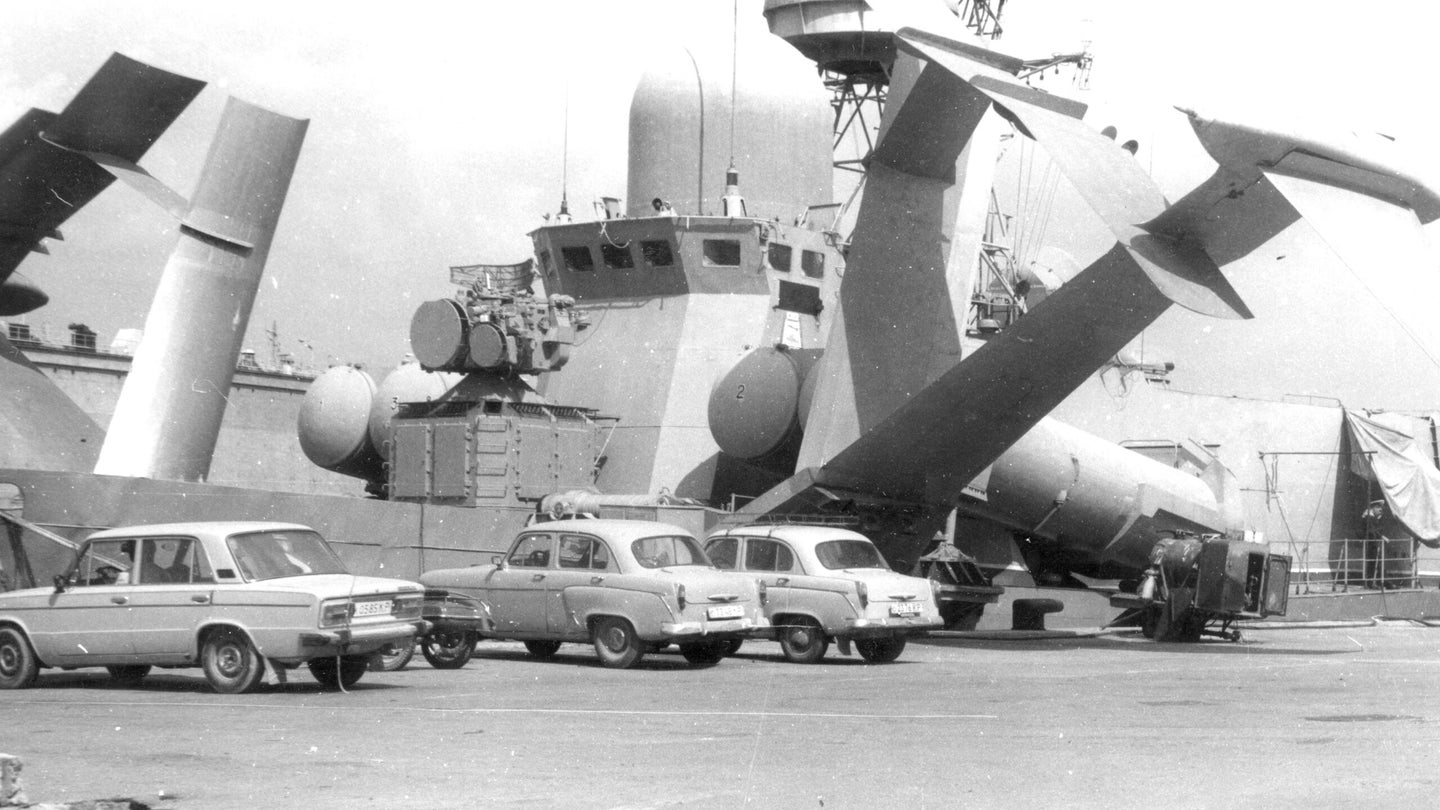 Known in the Soviet Union as the Project 1240 Uragan, meaning hurricane, and given the Western codename Sarancha class, only one example of this hydrofoil missile boat was ever built, but it certainly packed a punch and was in many ways a remarkable design from a technical point of view. With enormous hydrofoil surfaces on either side at the front, and another at the rear mounting propellers, the Uragan could race across the surface of the water at an impressive 60-plus knots.

The torpedo attack craft of the early Cold War years had been supplemented by coastal craft armed with anti-ship missiles by the 1960s, with the Soviet Union pioneering much of this effort. It was Soviet-made Komar class missile boats that sank the Israeli destroyer Eilat in 1967, bringing these types of high-speed attack craft to greater prominence.

In a quest to further increase the performance of missile craft, work began on mating anti-ship missiles with hydrofoil designs, the hulls of which lift out of the water as they increase speed, decreasing drag as they are carried on wing-like surfaces. As well as boosting speed, it also typically improves fuel economy and can improve stability, even in rougher sea states. During the Cold War, the concept was not always a total success, but it certainly produced some interesting designs along the way.

Enter the Uragan, constructed in Leningrad and immediately identified by the sheer size of its titanium-alloy hydrofoils. Those at the front were of the surface-piercing type, which meant they were partly out of the water when foilborne. When not deployed, they projected well clear of the hull at an angle of almost 45 degrees.

The hydrofoil at the rear was of a different type, being fully submerged when foilborne, with vertical struts mounting rudders, plus propulsion pods at the tips. Propulsion came from a pair of gas turbines each developing up to 18,000 horsepower. Reportedly, these were maritime versions of the turboprops that power the Tu-95 Bear strategic bomber, versions of which remain in service today.

The propellers were arranged as pairs on each of the aforementioned propulsion pods, and there were also a pair of diesel engines driving pump-jets, which were used for maneuvering at slow speeds.

The Uragan was a big boat, over 160 feet long and with a displacement of over 400 tons when fully loaded, making it the biggest naval hydrofoil of its era. Construction was mainly of aluminum-magnesium alloy.

All that capacity supported an appropriately heavy weapons load: two twin launchers for P-120 Malakhit (SS-N-9 Siren) high-subsonic anti-ship missiles with a range of around 70 miles, one twin Osa-M (SA-N-4 Gecko) surface-to-air missile launcher with a reach of up to 20 missiles, and one 30mm six-barrel AK-630M Gatling-type cannon. Fire-control and navigation radar was supplemented by an electronic countermeasures suite.

The first and only Uragan was МРК-5, laid down at Leningrad’s Primorsky Shipyard in 1973 and beginning trials in the Baltic Sea in 1977. Two years later, the vessel was moved by inland waterway to the Black Sea, the other major area of operations for Soviet (and later Russian) military hydrofoils. It seems that МРК-5 was at least a qualified success in its trials since it remained in use at Sevastopol until being decommissioned in 1990. Reportedly, the P-120 anti-ship missiles were test-fired on two occasions and the vessel displayed “excellent seaworthiness.”

Overall, however, the design unsurprisingly proved highly complex, tricky to operate, and no doubt also expensive. It’s probable that the size and cost of the Uragan compared unfavorably to more versatile corvette and frigate designs.

Sadly, the one-off Uragan is no more: it was damaged by a fire in 1992 and then sank. After recovery, the wreck was scrapped.

The idea of the military hydrofoil has not gone away, however, with Russia in particular continuing to use these craft, including some of the Cold War-era counterparts to the Uragan. In the United States, meanwhile, smaller hydrofoil boats were still being tested recently, more than 25 years after the U.S. Navy retired its six Pegasus class missile boats, the last of its operational hydrofoils. You can read about both of those U.S. concepts in this previous article.

As for the Uragan, today, we have only period photos from the Soviet-era to give us an idea as to what it must have been like to see this 400-ton, missile-armed monster slicing through the waves of the Black Sea.

Hat-tip to one of our favorite Twitter follows @Saturnax for bringing this topic to our attention.