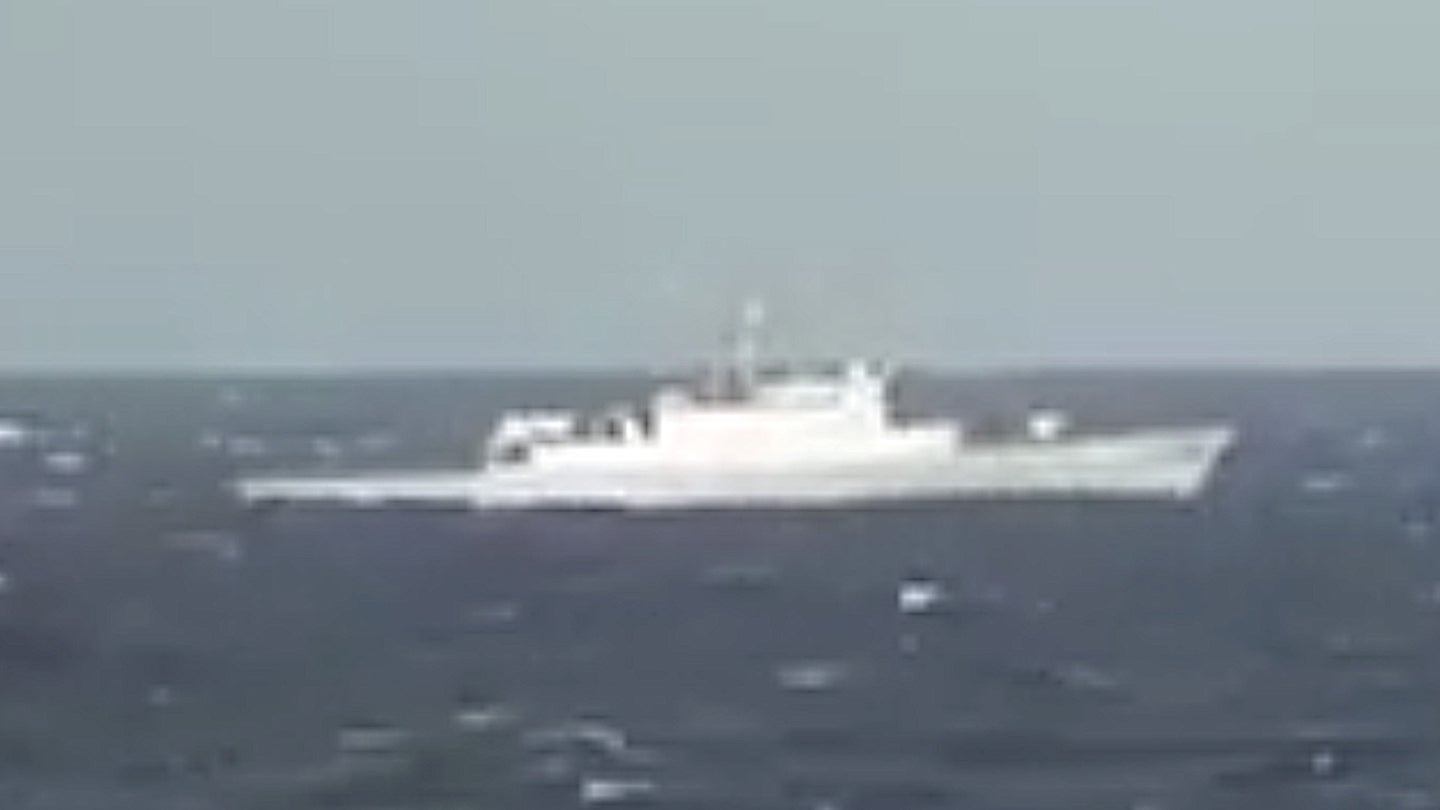 The Iranian Navy says that the Makran, a sea base-like ship that only entered service in January, and the corvette Sahand are now sailing in the South Atlantic and has released video of the latter vessel plowing through the waves in that region. Previous reports have indicated that the ships' final destination is Venezuela, possibly with plans to deliver missile-armed boats and other weapons to the regime there, but they might also be scheduled to stop in Cuba, as well. The U.S. government has said that if the Iranian vessels are indeed carrying military-related cargoes that this represents a "threat" to regional security and that it reserves the right to at least attempt to block any such deliveries.

It seems most likely that the newly released video of Sahand, seen below, which is undated, was taken by someone on the deck of the Makran. No other ships are visible and there are no obvious geographical markers to help determine the exact location where it was shot. During a press conference on June 10, Iranian Rear Admiral Habibollah Sayyari also told reporters that the two ships were in the Atlantic Ocean and that they had not made any port visits since entering that body of water. This appears to be the first official statement from Iranian authorities about this naval deployment to the Western Hemisphere, the first of its kind for Iran after years of aborted attempts.

The video also shows the seas that Sahand is sailing to be relatively rough. “The Navy is improving its seafaring capacity and proving its long-term durability in unfavorable seas and the Atlantic’s unfavorable weather conditions,” Sayyari said at the press conference.

Reports had first emerged in May that the two naval vessels appeared to be headed for the Atlantic via the Cape of Good Hope, which they reportedly rounded on June 4. Posts on social media had suggested that Makran and Sahand might need to return to Iran after the Iranian Navy's replenishment ship Kharg sank in the Gulf of Oman after suffering a major fire on June 2. This has clearly turned out not to be the case. The circumstances surrounding what happened to the Kharg remain murky, though there is already significant, if unconfirmed speculation that it could have been the latest victim of an Israeli sabotage campaign against Iranian commercial and navy ships.

Makran, which formally entered service in January and that you can read about more here, is a converted oil tanker that the Iranian Navy now describes as a "forward base ship." Sahand, Iran's most modern warship, is a 2,000-ton displacement corvette, though official sources often describe it as a destroyer or frigate, derived from the design of British-made vessels supplied to Iran under the Shah.

Satellite imagery of Makran from April had shown it carrying at least seven fast attack craft, possibly types capable of being armed with anti-ship cruise missiles, on its upper deck. This, in turn, had suggested that Iran might be planning to deliver those boats, as well as other weapons and military-related cargo, to Venezuela.

“The precedent of allowing Iran to provide weapons to the region causes me great concern,” Secretary of Defense Lloyd Austin told members of Congress at hearing today. "I am absolutely concerned about the proliferation of weapons, any type of weapons, in our neighborhood.”

The is roughly identical to a statement Pentagon Press Secretary John Kirby issued last week. Politico also reported that the Biden administration had warned both Venezuela and Cuba against allowing the Iranian naval vessels to enter their ports for any reason, adding that officials in Caracas had apparently indicated that they might be willing to acquiesce to the American demands in exchange for sanctions relief.

President Donald Trump and his administration had hit the Venezuelan government with a number of new sanctions following abortive attempts, starting in 2019, by opponents of President Nicolas Maduro to bring an end to his increasingly dictatorial regime. There was also a bizarre failed coup against Maduro, led in part by American mercenaries, including veterans of U.S. special operations units, in 2020. Ties between the Venezuelan and Iranian governments have also grown, in general, in recent years, with Maduro openly talking about buying weapons from Iran, including "short, medium and long range missiles," last year. There have been reports of Venezuelan cooperation with Iran on the production of drones in the past, as well.

Separately, the Trump administration had also reversed key efforts that President Barack Obama's administration had made to increasingly normalize relations with Cuba. U.S. policy decisions toward Cuba under Trump had also became intertwined with reports centering largely on still-unexplained sonic phenomena that may have left American government employees with traumatic brain injuries and otherwise sickened in that country. Multiple investigations, including ones that are still ongoing now, into what some now refer to as "Havana Syndrome" have yet to reach any firm conclusions about the cause or causes of any of these incidents. Some have suggested that the injuries and ailments, which may have also impacted individuals working for the U.S. government in other foreign countries, as well as within the United States, could be the result of deliberate attacks by hostile actors. Cuba has not been directly accused of carrying out any such attacks, but has been criticized for failing to protect American diplomats.

It is important to note that Makran and Sahand pose virtually no direct, immediate threat to the United States, as The War Zone

has previously explained. At the same time, even just a port visit by those ships to either Venezuela or Cuba would almost certainly be touted as an act of defiance toward the U.S. government by those involved for propaganda purposes. As expected, Iranian authorities are also highlighting this deployment as a demonstration of their ability to safeguard their commercial interests in the region.

Last year, the U.S. government succeeded in using legal mechanisms to seize four tanker ships carrying Iranian gasoline bound for Venezuela. In 2019, British officials also detained an Iranian tanker loaded with oil bound for Syria as it sailed near Gibraltar. The latter ship was ultimately released. It remains unclear what the U.S. military, or other agencies of the U.S. government, may be willing or able to do to block or otherwise impede Makran and Sahand if it is determined that they are carrying weapons or other military cargo for delivery to Venezuela, or any other country in the Western Hemisphere.

No matter what, the arrival of the Iranian ships in the Western Hemisphere seems very likely to frustrate any attempts by the Biden administration to reverse Trump-era policies toward the governments in any of these countries, especially the regime in Tehran. American and Iranian officials are presently conducting indirect negotiations about the U.S. government's return to a controversial deal over Tehran's nuclear ambitions. Trump withdrew the United States from that agreement in 2018 and Iranian authorities have since violated all of its key provisions.

Biden's domestic political opponents are already making their positions clear on the deployment of the Iranian naval vessels.

"#Venezuela bought attack boats from #Iran last year, but only now are they trying to deliver them," Senator Marco Rubio, a Florida Republican, the ranking member of that party on the Senate Intelligence Committee, and a staunch opponent of the current Venezuelan and Cuban governments, wrote in Tweet today. "Either #Maduro unconditionally turns them away or [the] U.S. should force them to turn around."

All told, how the Biden administration reacts to Makran and Sahand sailing in the South Atlantic for the first time could have broader geopolitical ramifications for the U.S. government, as well the regimes in Tehran, Venezuela, and Havana.

A new report from Iran's state-owned PressTV regarding the arrival of Makran and Sahand in the South Atlantic interestingly includes a presentation by an Iranian Navy officer showing various maritime routes on a map. A number of these look be the routes taken by Iranian naval vessels on past long-range overseas deployments, including Kharg's trip to China in 2013.

Curiously, the line that appears to represent the planned route for the current mission in the Atlantic cuts a straight path between West Africa and South America and then hooks eastward around Northwest Africa toward Europe, rather than turning westward toward the Caribbean.

Iranian authorities have now released additional imagery they say is of Makran and Sahand in the Atlantic, including pictures that appear to show the converted tanker refueling the corvette.

One of the pictures shows Makran riding very low in the water, indicating the ship is very heavily laden. Part of that load is almost certainly fuel for both ships during this voyage, but some experts have raised questions about whether this might point to the presence of other cargoes onboard, as well.

has also reported that an aide to Venezuelan President Nicolas Maduro had said that the Iranian ships would not visit that country.